Improved LSPR Properties of Ag–Pt and Pt Nanoparticles: A Systematic Study on Various Configurations and Compositions of NPs via the Solid-State Dewetting of Ag–Pt Bilayers

The localized surface plasmon resonance (LSPR) of noble metal nanoparticles (NPs) has become an important research topic in various fields and can be systematically tuned to obtain the desired device performance through the appropriate structural and elemental modifications. In this research, the improved LSPR properties of Pt NPs and diverse configurations and compositions of Ag–Pt bimetallic alloy NPs were demonstrated on sapphire (0001) via the solid-state dewetting (SSD) of Ag–Pt bilayers. A strong and dynamic LSPR response in the ultraviolet (UV) and visible (VIS) regions was demonstrated depending on the elemental composition and surface morphology of the NPs, which is discussed along with finite difference time domain (FDTD) simulations. In comparison, the Ag–Pt NPs exhibited stronger LSPR excitation, whereas the Pt NPs showed a relatively weaker and broader response. Meanwhile, the Pt NPs fabricated in this study still demonstrated a much-enhanced LSPR response compared to previous studies on the solid-state dewetting of pure Pt films due to improvements in configuration, uniformity, and interparticle gaps. Various surface morphologies of NPs, such as connected nanoclusters, elongated NPs, and isolated spherical NPs, were obtained on the basis of alloying, diffusion, Rayleigh instability, and a surface minimization mechanism, which were different from those of pure Ag and Pt NPs in similar growth conditions. Particularly, one-step annealing of an Ag–Pt bilayer yielded Ag–Pt alloy NPs below 600 °C, which subsequently transformed into pure Pt NPs above 650 °C, in which the high diffusivity and high vapor pressure of Ag atoms significantly facilitated the overall growth process of the NPs. View Full-Text
Keywords: plasmonics; solid-state dewetting; alloy nanoparticles; Ag–Pt NPs; FDTD plasmonics; solid-state dewetting; alloy nanoparticles; Ag–Pt NPs; FDTD
►▼ Show Figures 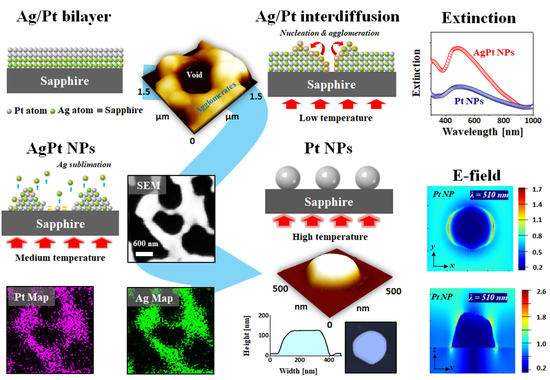