3.1. Effect of the Deformation Temperature

3.3. Effect of the Deformation Rate

A schematic illustration of the different deformation rates is given in Figure 2c. Figure 15 presents the optical micrographs of the samples with the different strain rates. It can be seen that the microstructures of all samples are composed of martensitic laths and fine ferrite grains. The increase in the strain rate leads to the increase in the phase fraction of ferrite and the decrease in lath martensite fraction. There is not enough time for the recovery of dislocations and other defects at the high deformation rate, which provides more nucleation positions for DSIT ferrite and thus greatly promotes the ferrite transformation.
The stress–strain curves for the different strain rates are shown in Figure 16. The stress–strain curve shows a more obvious softening with the decrease in the strain rate. The stress–strain curve of the sample undergoing the highest deformation rate (1 s−1) reflects the typical work hardening characteristics. When the strain rate is the slowest (0.01 s−1), the phase fraction of ferrite is the lowest. Thus, it is considered that the main origin of the softening phenomenon would be the dynamic recovery of dislocations, and the dynamic recrystallization of a small amount of ferrite grains.
According to [25], the critical stress for recrystallization, σc, can be determined in the curves for the work-hardening rate, θ, versus flow stress, σ, where θ is expressed as dσ/dε. As seen in Figure 17, the value for σc is associated with the point at which the second derivative of the work-hardening rate θ with respect to stress, i.e., d2θ/dσ2, is zero. The simplest equation for fitting the θ-σ curve can be given by [26]: where A, B, C and D are constants depending on the deformation parameters. Obviously, differentiation of the above equation with respect to σ is expressed as: Thus, it can be derived that When d2θ/dσ2 = 0, σc can be obtained by
For the sample deformed at 900 °C, with a deformation rate of 0.01 s−1 the fitted polynomial is (see Figure 1 below). Hence, the critical stress for recrystallization, σc, is calculated as 114.08 MPa. However, σc for all other samples is higher than the loading stresses. It should be noted that the sample in Figure 1 undergoes the highest deformation temperature and the slowest deformation rate. As the deformation temperature or the deformation rate is decreased, the dynamic recrystallization is blocked.
The martensitic starting and finishing temperatures for the samples with the different deformation rates are presented in Figure 18. It is found that an increase in the strain rate results in an increase in Ms. Under the condition of high strain rate, the high density of dislocation remains and provides more nucleation sites for the subsequent martensitic transformation, reflected as the increase in martensitic starting transformation temperature. Furthermore, the higher deformation rate results in a higher yield strength of the metastable austenite, which would hinder the movement of austenite/martensite boundaries during martensite. Hence, the increase in the deformation rate results in the decrease in the martensitic transformation rate, and thus the decrease in Mf.
Figure 19 shows the Vickers hardness of the samples with the different strain rates. With the increase in the strain rate, the hardness increases monotonically. This is attributed to the fact that the microstructure has sufficient time for recovery and recrystallization under the condition of slow strain rate, which leads to the reduction of hardness. 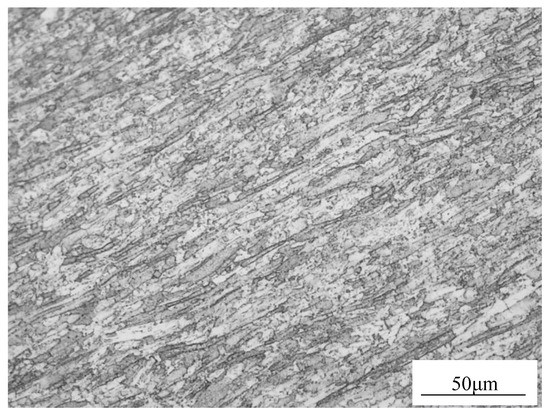 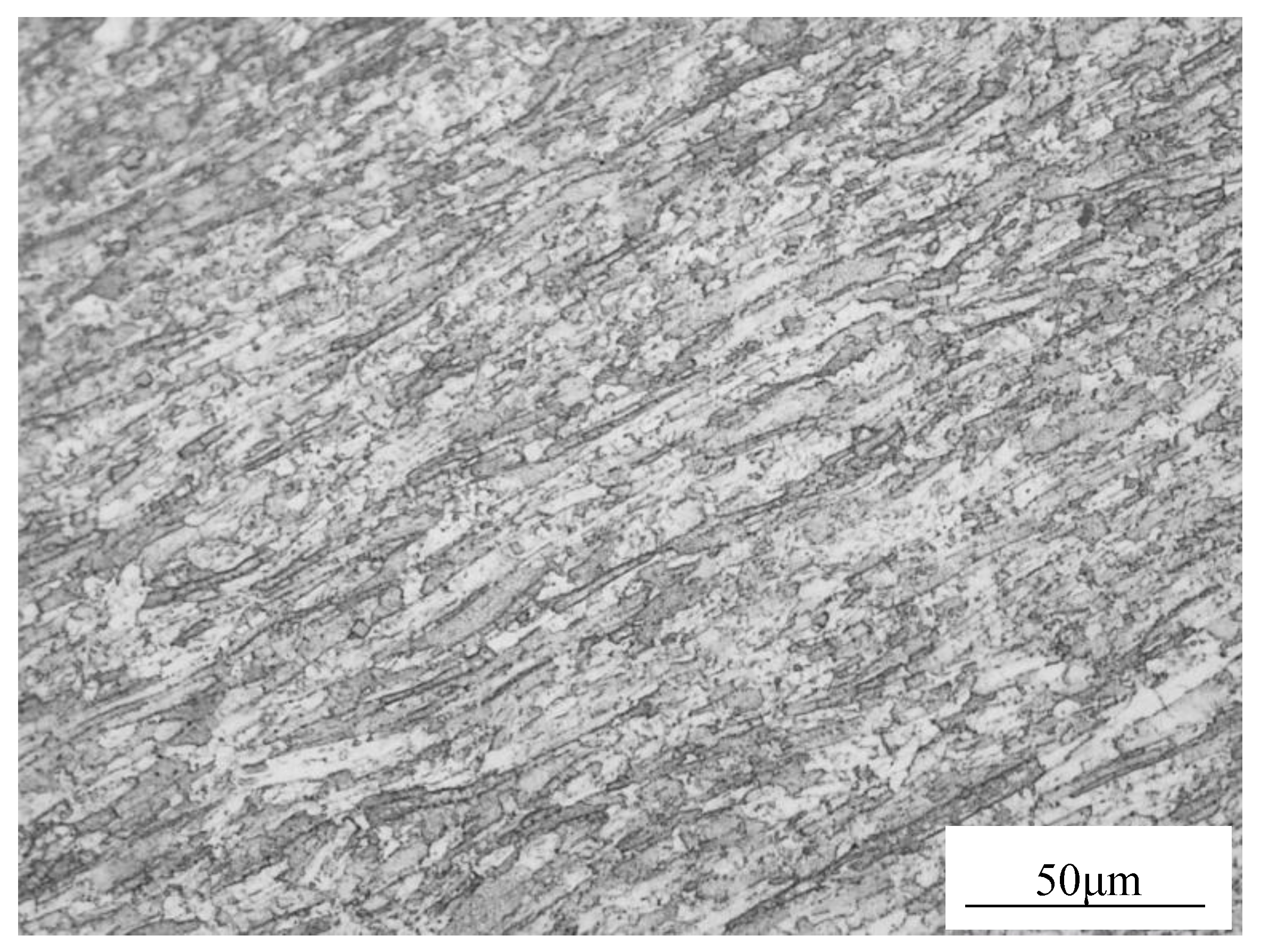 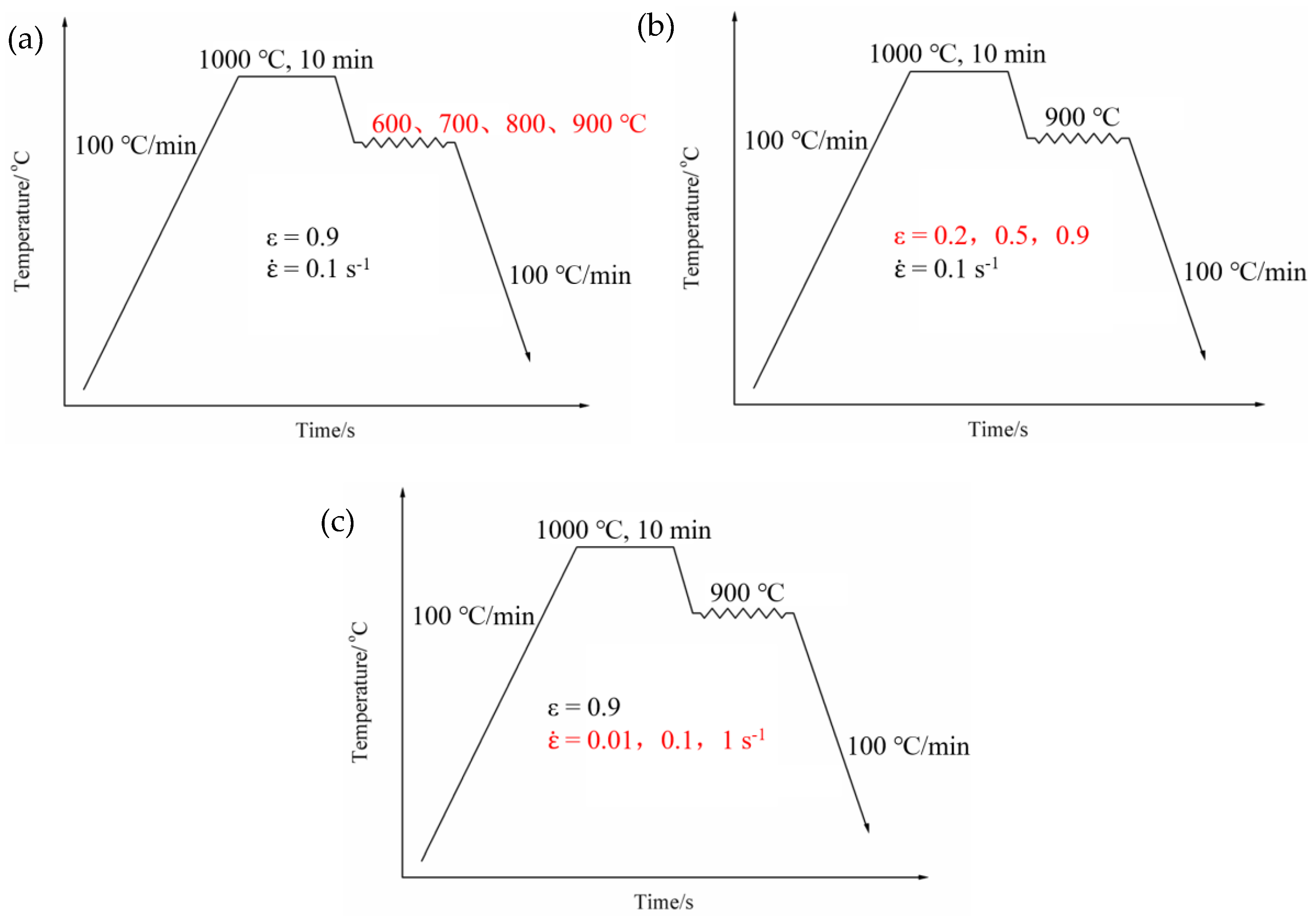 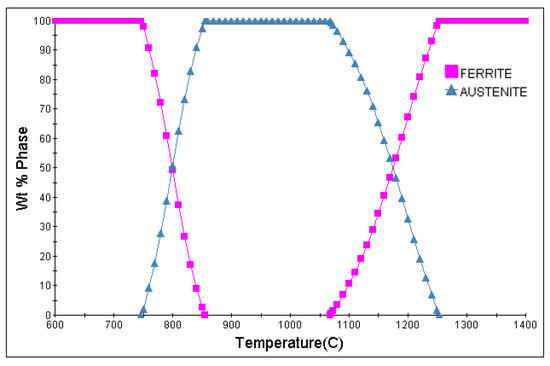 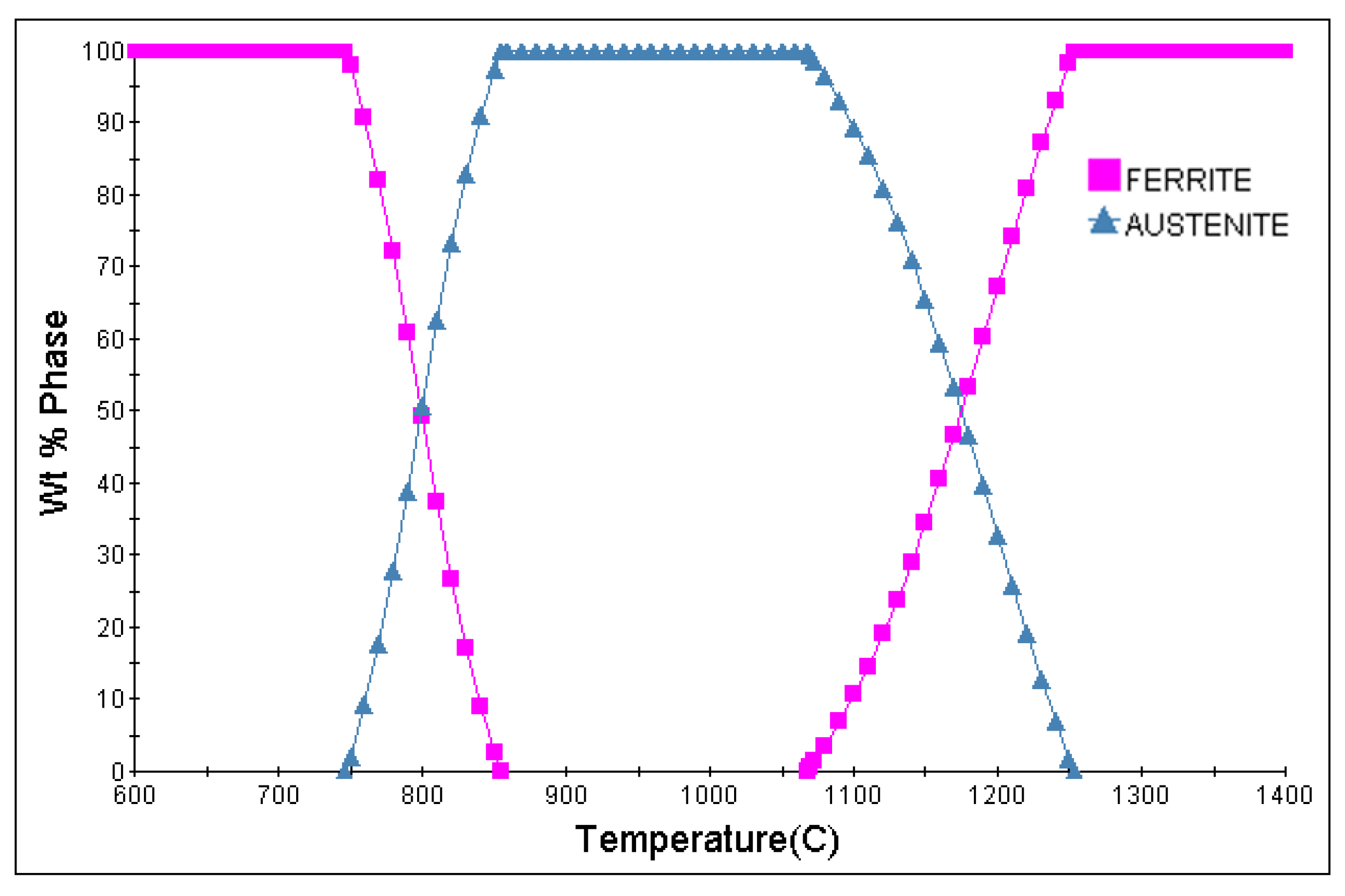 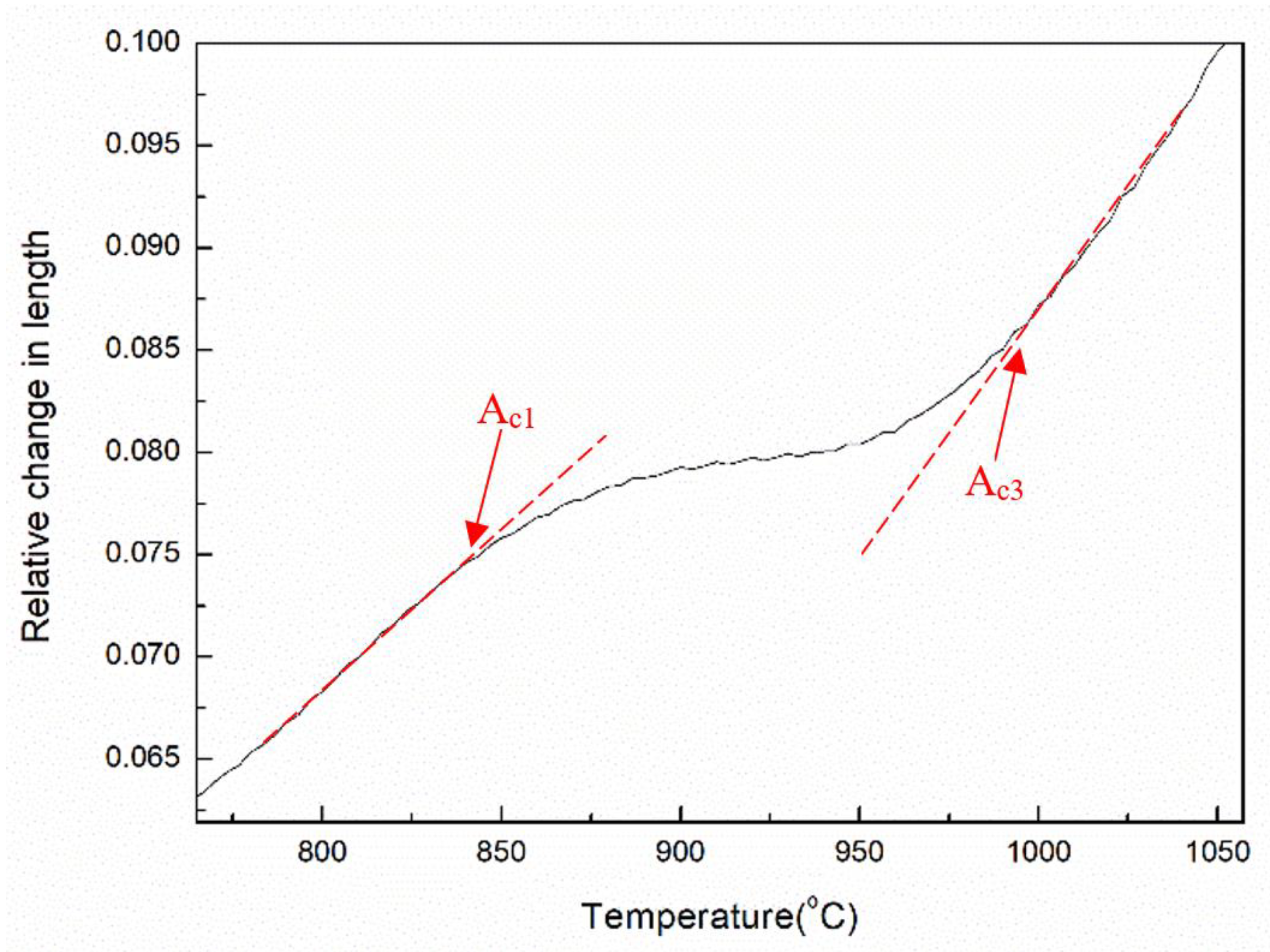 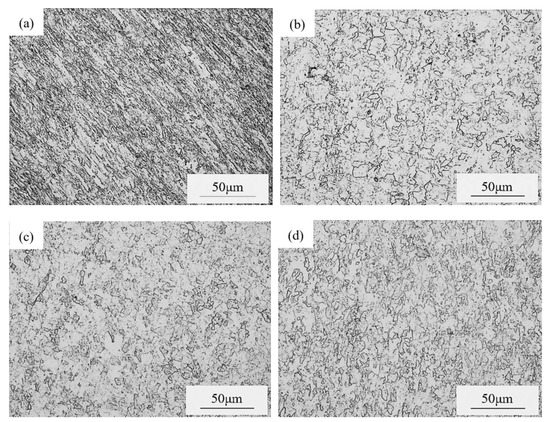 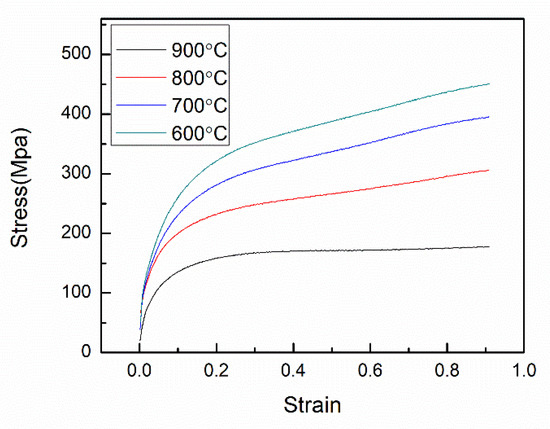 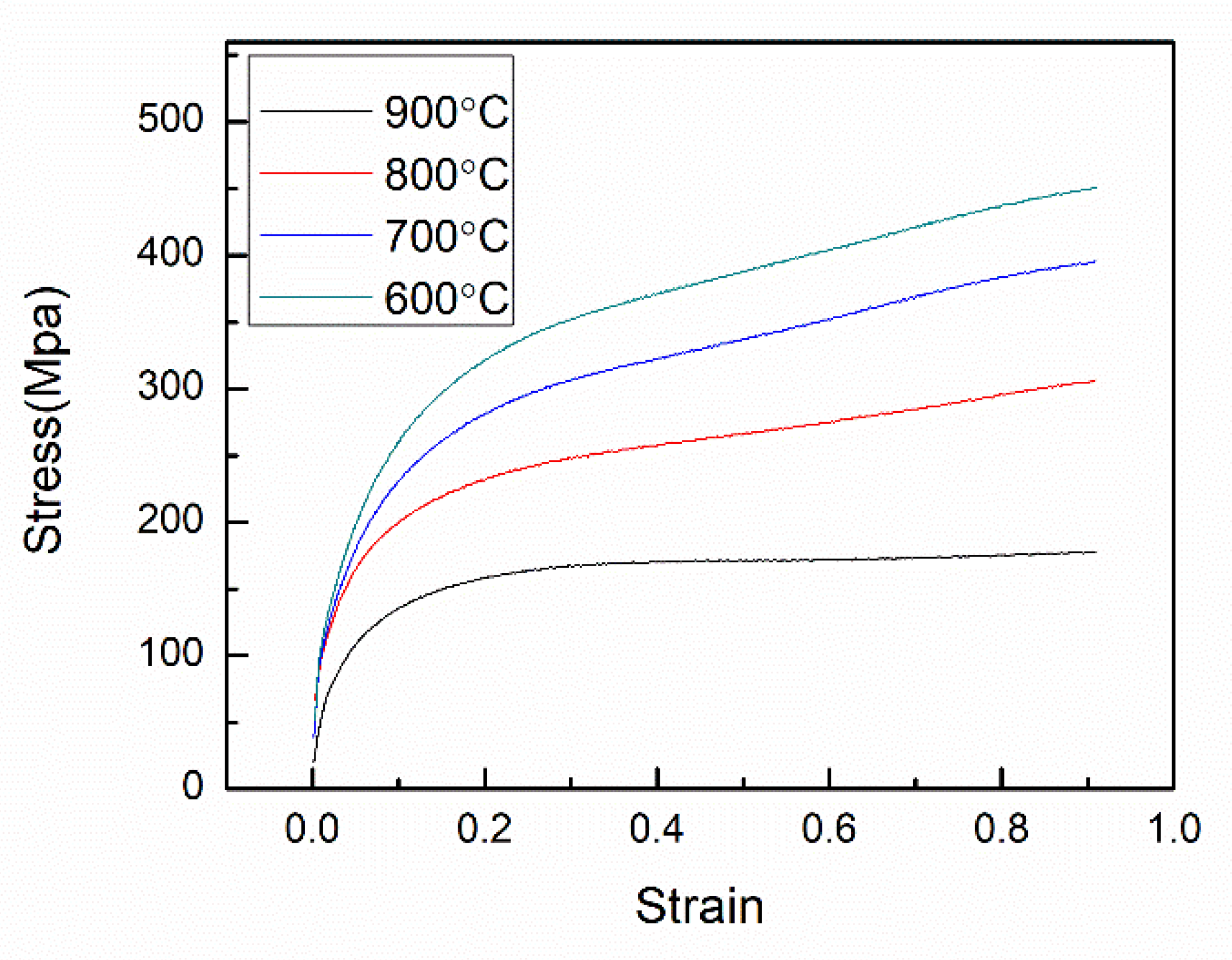 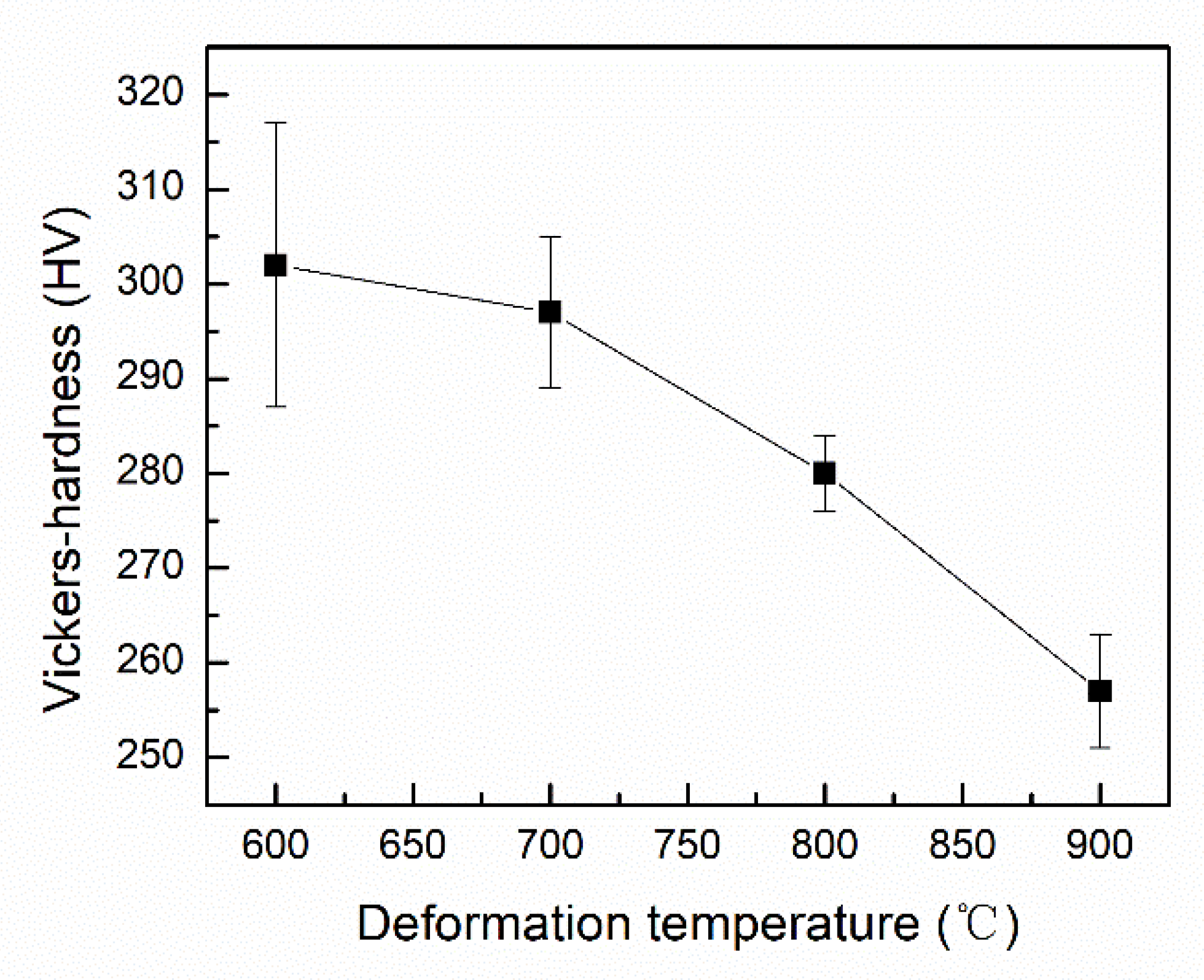 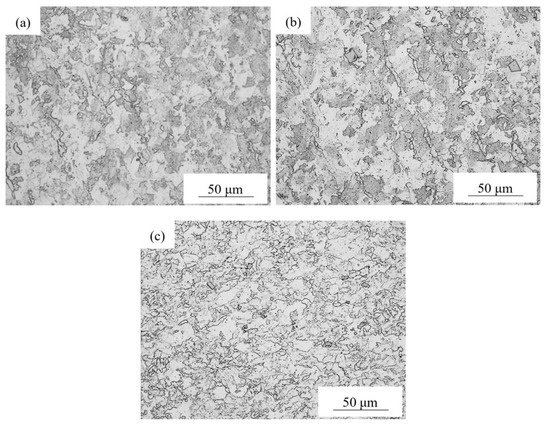 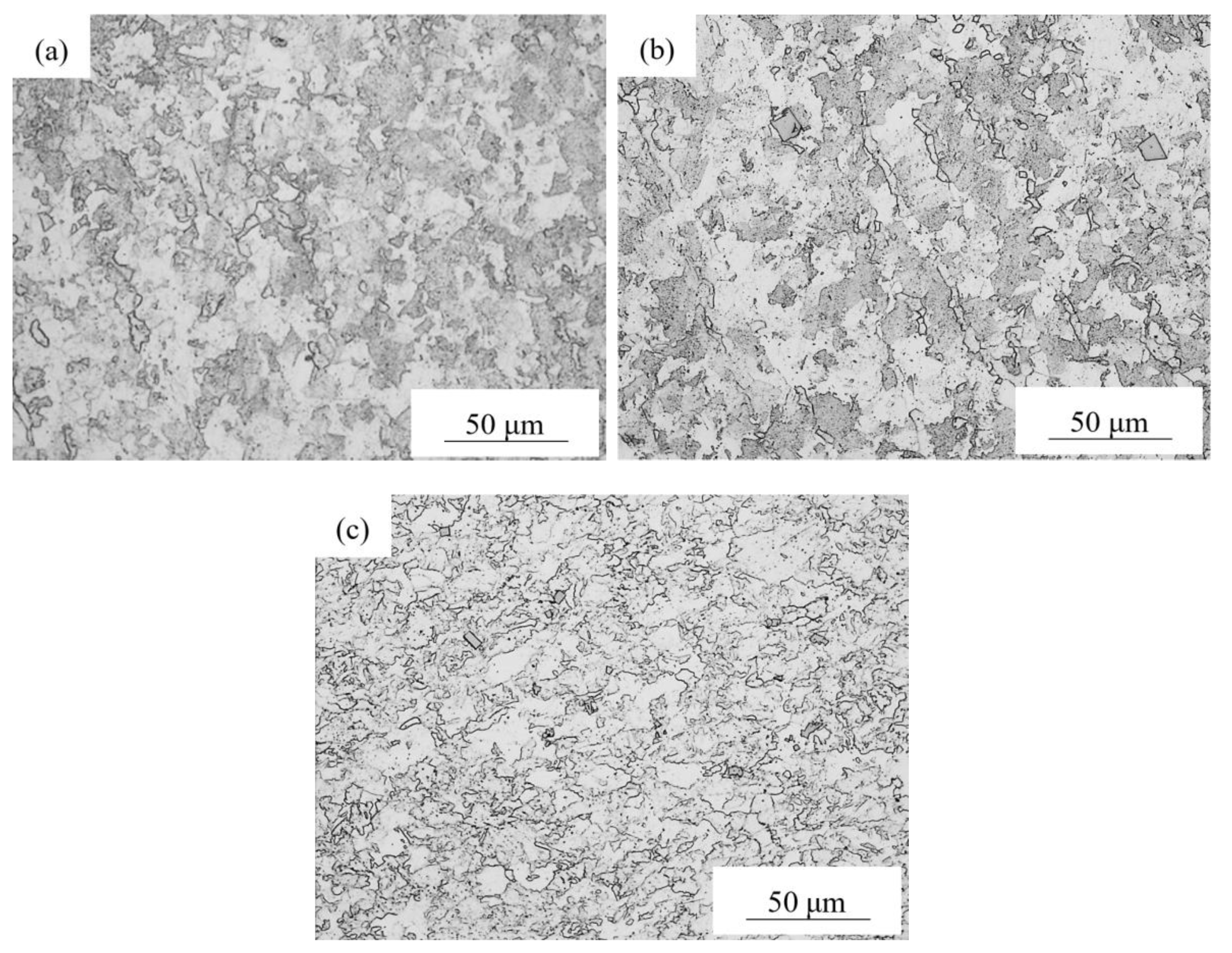 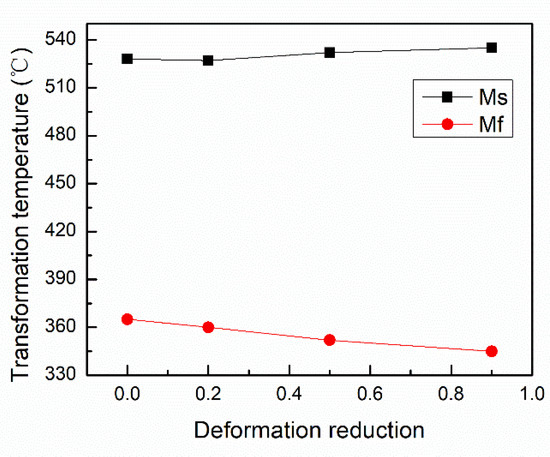 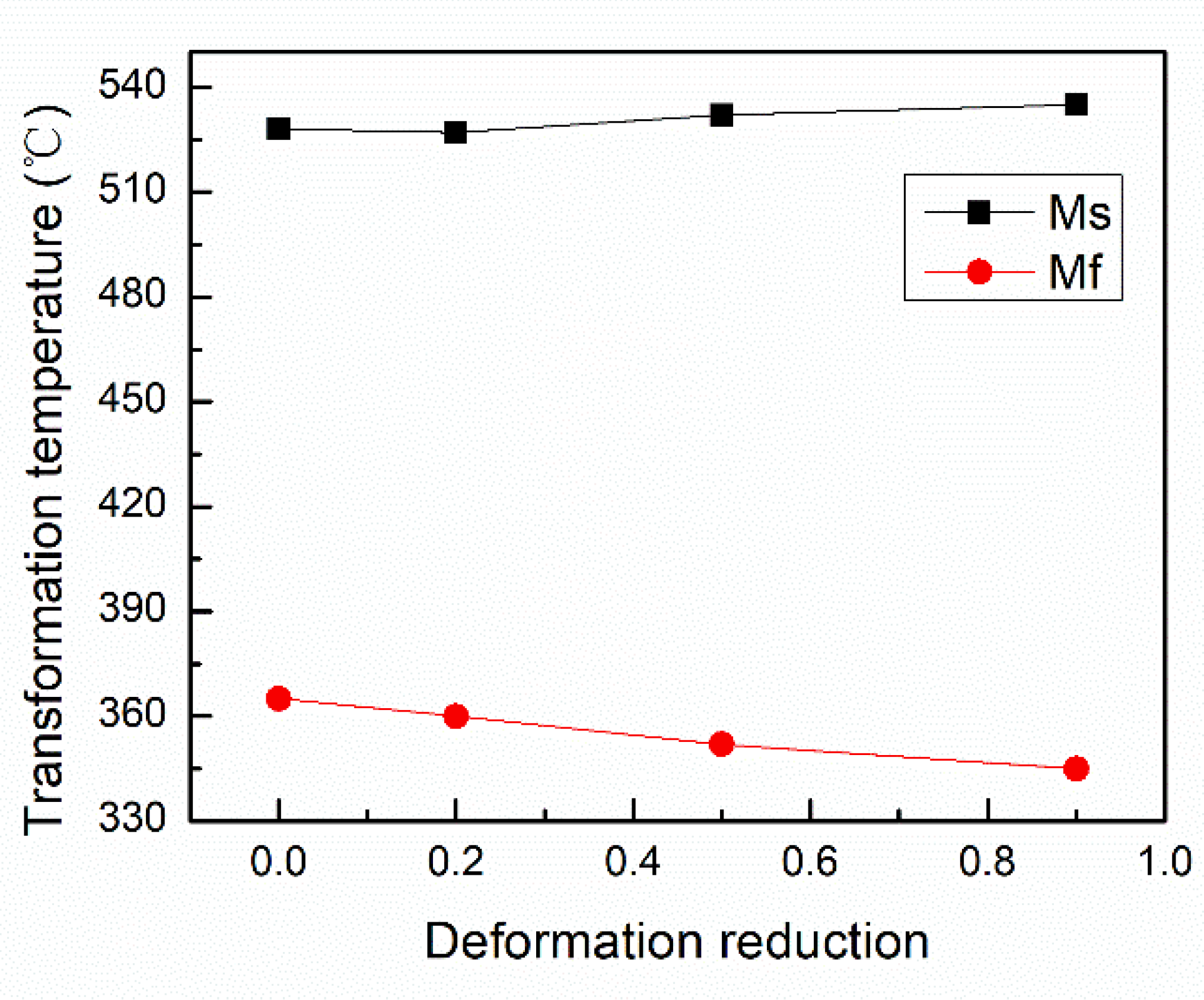 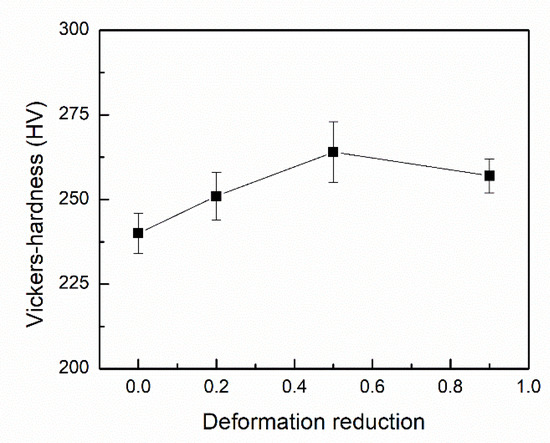 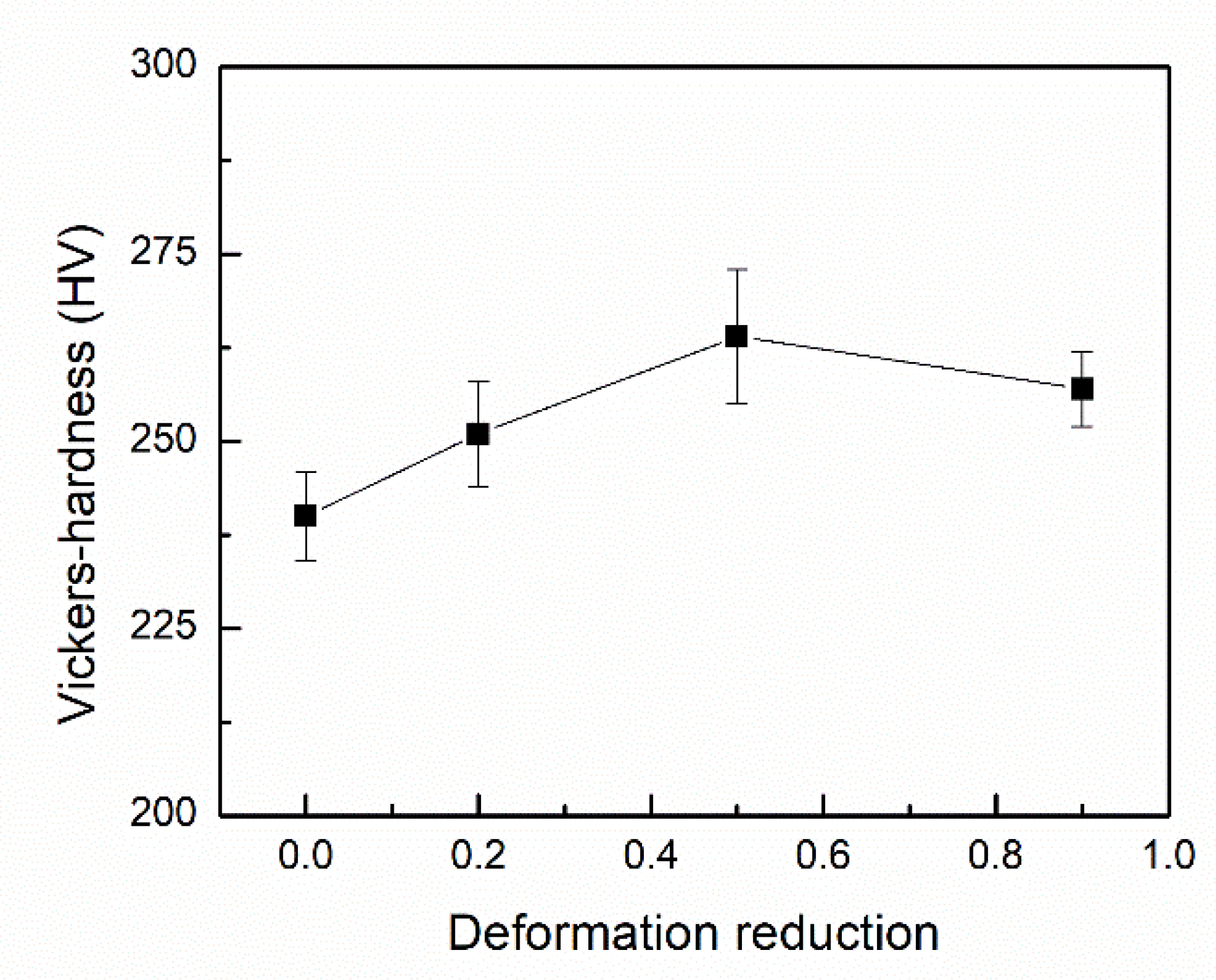 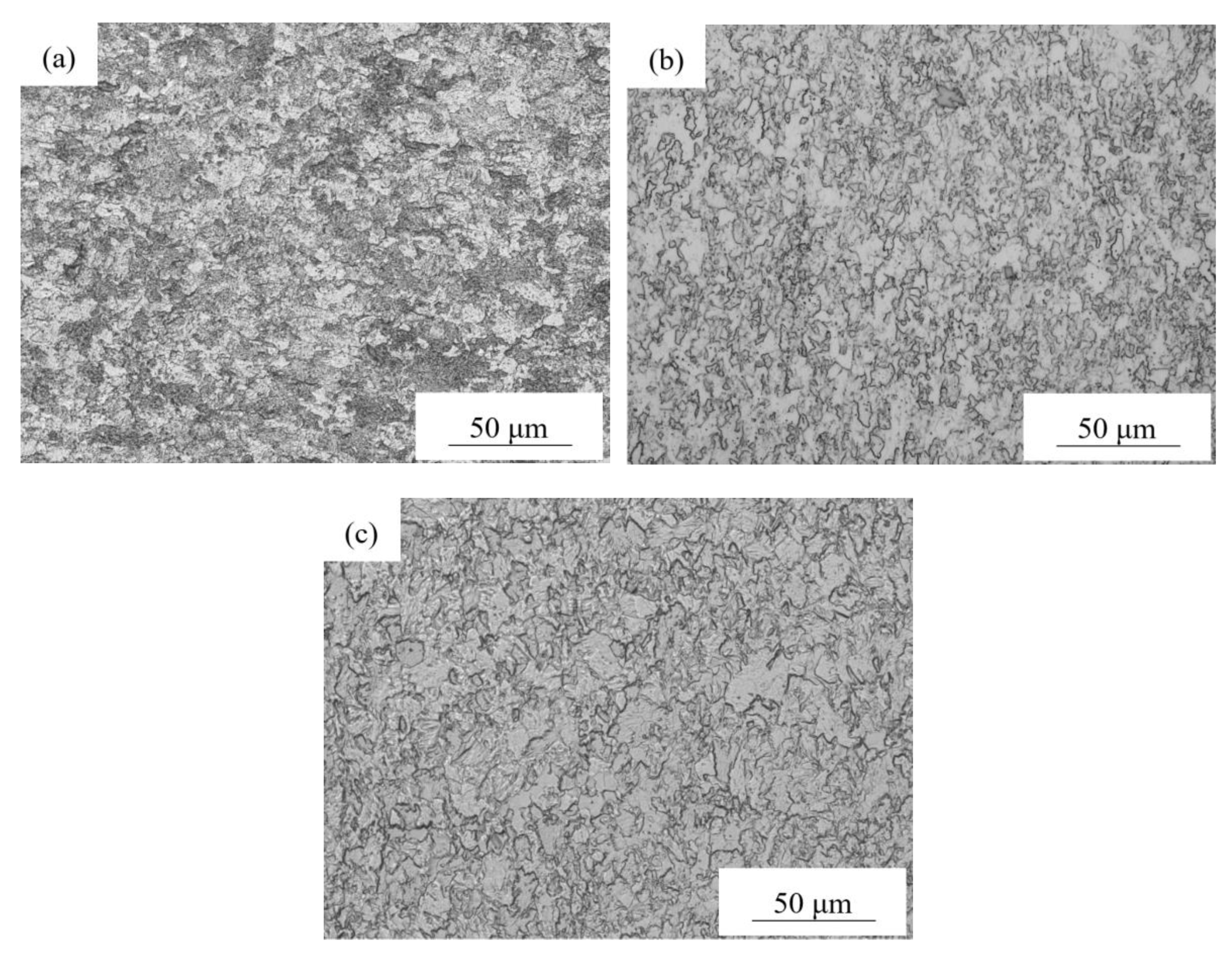 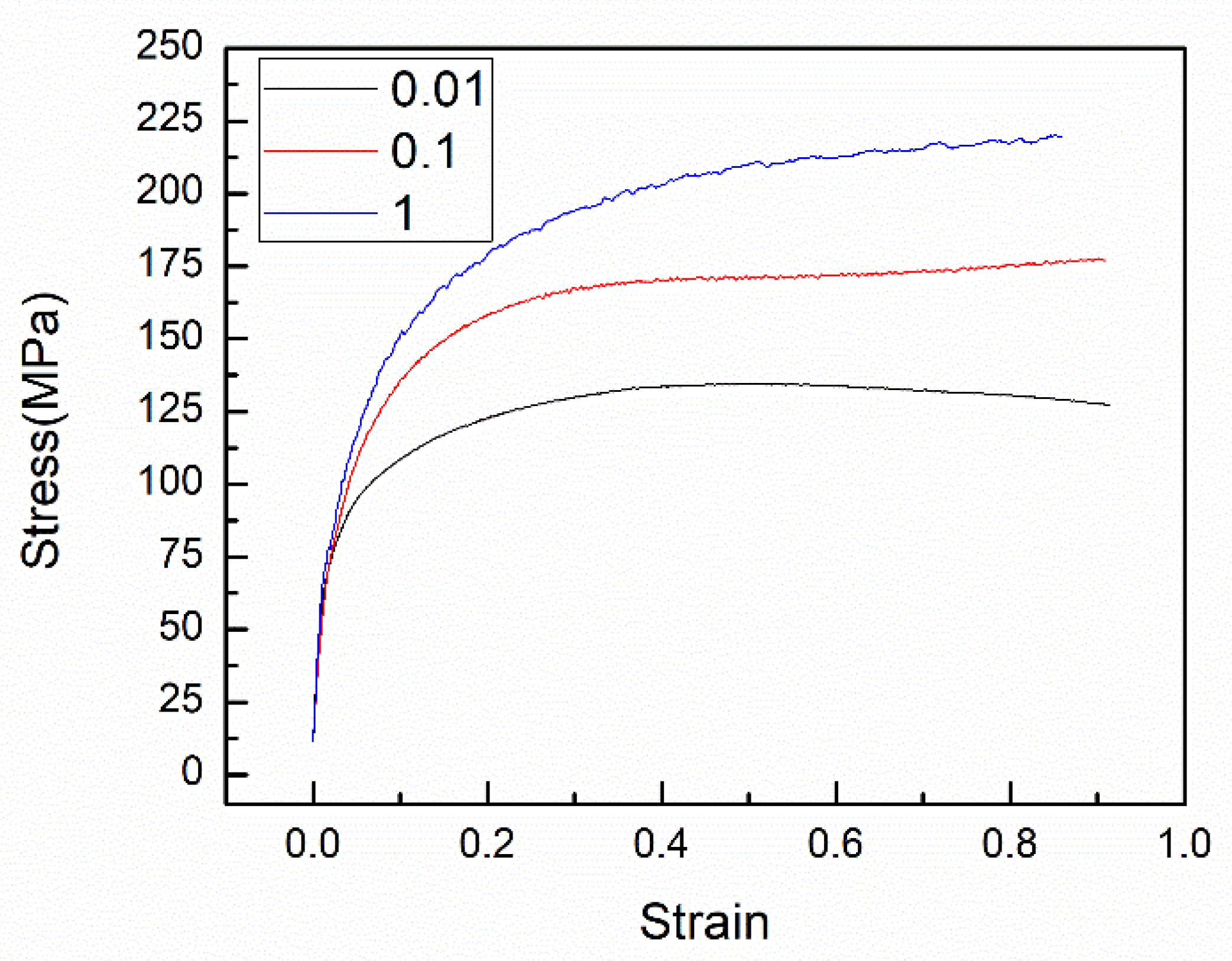 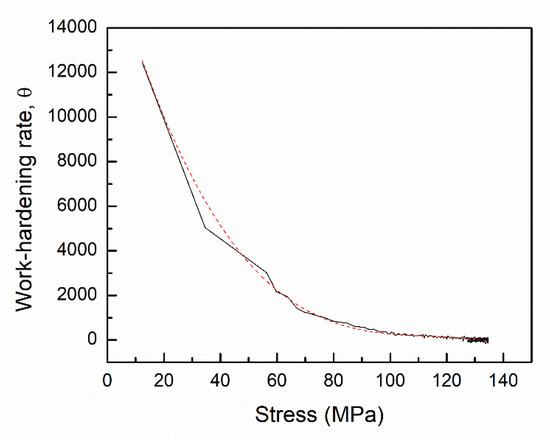 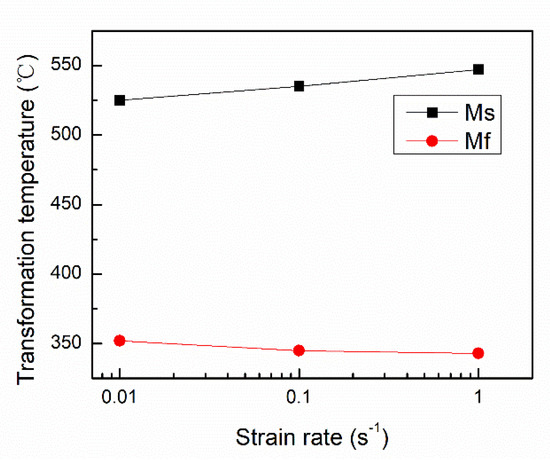 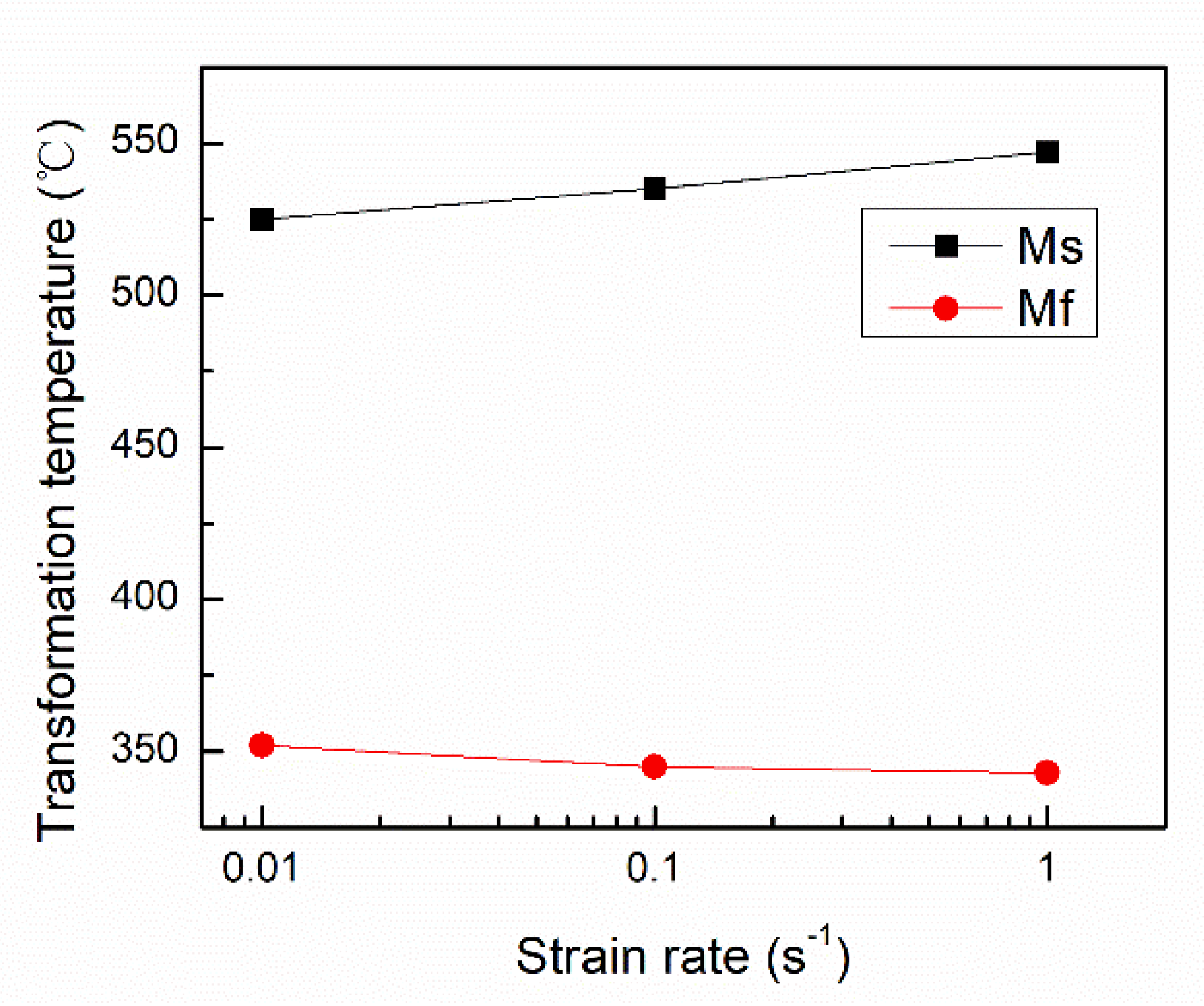 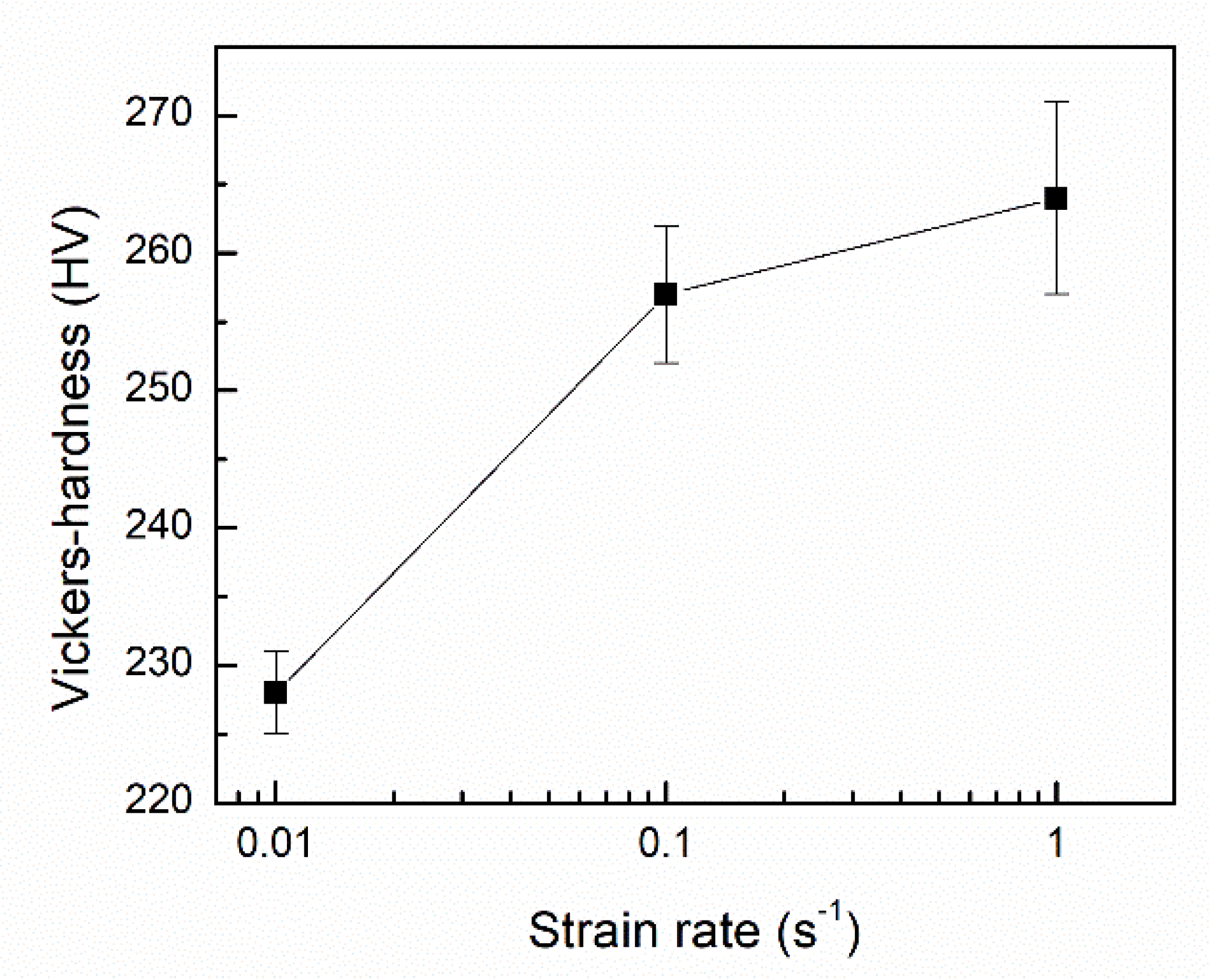