The test plates manufactured by the SLM process were 3.4 mm thick with dimensions 50 (width) mm × 100 (length) mm. All samples were manufactured using a powder layer thickness of 40 µm, a beam power of 285 W, a scan line speed of 960 mm/s, and a hatch spacing of 0.11 mm. They were built in two different directions; vertical and horizontal (Figure 1) and were tested in the as-built condition. The plates had a rough surface and were therefore machined to approximately 3.3 mm of thickness prior to testing. The nominal chemical composition (wt.%) for the gas-atomized (GA) Alloy 718 powder is presented in Table 1.
The Varestraint tests were conducted by making a gas tungsten arc welding with a welding current of 70 A, welding speed of 1.1 mm s−1, and an arc length of 2 mm along the plate and bending the plate at the end of the welding process. Thus, the weld is made as “bead on plate”, with no joint involved. The Varestraint test method has been used for many years and details about the equipment can for example be found in [5]. The plates were bent with a stroke rate of 10 mm s−1. The die mandrel radii used were 40, 60, 100, 200 and 300 mm, which led to augmented strains ranging from 0.5 to 4%. The material thickness has been taken into account while calculating the augmented strain for each specimen. Three repetitions were used for each strain level due to data scatter and an average value together with the respective standard deviation was used to express the test results. Total crack length (TCL), the length of all visible cracks in both HAZ and fusion zone (FZ), was used as the criteria for evaluating the cracking susceptibility.
The TCL was measured using a stereomicroscope Olympus-SZX9 (Olympus Corporation, Tokyo, Japan). Cracks were not easily visible due to the oxidation after welding so manual polishing (3-μm diamond suspension) was conducted, followed by electrolytic etching with Oxalic acid. TCL was measured by following the crack path. After measuring the TCL, samples were cut out from the plates for more in-depth microscopic investigations. Samples from weld cross-sections, as well as specimens showing the top surface along the weld, were mounted, ground, polished and electrolytically etched with oxalic acid.
An optical microscope Olympus-BX60M (Olympus Corporation, Tokyo, Japan) was used for microstructural characterization of the welded samples. A Tescan GAIA3 FEG SEM (Scanning electron microscope; Tescan Corporation, Brno, The Czech Republic) with Channel 5 software (Oxford Instruments, Abingdon, UK) was used for the EBSD (Electron back scatter diffraction) analysis.

3.1. Evolution of Structure and Texture of the Base Metal

The grains in SLM manufactured parts have a dendritic structure and are mainly oriented in the building direction of the part being built (Figure 1). EBSD mapping was used to determine the grain structure and texture of the parts. These maps reveal, inter alia, grain shape and crystallographic texture of the material. Figure 2a is a SEM image of the unetched microstructure showing grain orientation parallel to the building direction (BD). Figure 2b is EBSD inverse pole figure (IPF) coloring mapping of the same image as 2a. The color key representing the crystal orientation and IPF is given on the right side of the Figure 2b. The IPF color map was plotted with regard to Y (BD) direction. Thick black lines represent high angle grain boundaries with θ > 15° misorientation, while the thin black lines represent low angle grain boundaries (5–15°) misorientation. The microstructure observed in the sample consisted of columnar grain structure with a preferential grain growth in <001> orientation parallel to the building direction.

3.2. Evaluation of Weldability and Microstructural Analysis of Welds

The hot cracking susceptibility of the welds was evaluated by crack measurements on each welded sample after a Varestraint test. The average of total crack length versus augmented strain of the samples welded parallel and transverse to the elongated grain orientation is shown in Figure 3. Figure 3a shows the susceptibility to form hot cracks, both in HAZ and FZ. The magnitude of TCL is larger at higher strain levels (3% and 4% strain) in the specimens welded transverse to the elongated grain orientation. The threshold strain, i.e. the strain to initiate cracking was between 0.8 and 1.6% strain for both types of samples. Although, the saturated strain, i.e. the level of strain above that TCL does not change, could not be found for any type of specimen in the present study. Figure 3b shows solidification cracks occurring in FZ of the samples, while Figure 3c shows the magnitude of liquation cracks occurring in the HAZ. It can be seen from these figures that a significantly higher degree of hot cracking occurred in the samples welded transverse to the elongated grains, as compared to the ones which were welded parallel to the elongated grains (Figure 3a). Cracking in the FZs (Figure 3b) of both types of the samples had no significant differences in amount but in the HAZ (Figure 3c), it was almost twice as much in the samples welded transverse to the elongated grain orientation, compared to the samples welded parallel to the elongated grains.
Three types of solidification cracks in FZ were observed in this investigation; (i) open cracks exhibiting little or no backfilling, (ii) partially backfilled cracks of moderate size, and (iii) completely backfilled cracks. The crack in Figure 4a is an example of an “open” crack since there is a little or no apparent evidence of backfilling by the eutectic material. Figure 4b is showing a completely backfilled crack and partially backfilled crack.
In the present study, all welded specimens exhibited similar cracking morphology in FZ. Cracks in FZ appeared in a roughly semicircular array outlining the location at the trailing edge of the weld pool on the spot where the augmented strain during Varestraint test was applied. Closer investigation showed that all the FZ cracks were located in the boundaries between individual grains (Figure 4). It is a well-known fact from the welding literature that during solidification the grains at the solid-liquid interface tend to grow in the direction of the maximum temperature gradient [13]. Consequently, cracks propagating in these grain boundaries were oriented perpendicular to the trailing edge of the weld pool.
Most of the cracks in the samples were initiated in the PMZ and were extended away from the fusion line into the HAZ along the grain boundary paths. PMZ is shown in the Figure 5a and Figure 6a with red dashed lines. Some cracks initiated in HAZ too. The EBSD analysis of both specimens demonstrated that crack propagation in PMZ and HAZ always occurred along high angle grain boundaries (Figure 5c and Figure 6c). This cracking behavior was similar in both types of welded samples. According to the literature [12], the high angle grain boundaries are more susceptible to HAZ cracking during welding due to their ability to accommodate a large number of segregated elements, in comparison with low angle grain boundaries, leading to their liquation.
Direction of the grains in HAZ was also found to play an important role for the cracking susceptibility of the material. In the sample welded transverse to the grain orientation (Figure 5) the cracks were longer, widely opened and uninterruptedly occurring along the favorably oriented grain boundaries perpendicular to the FZ. On the other hand, the cracks in sample welded parallel to the elongated grain orientation (Figure 6) were observed to run parallel to the fusion line, and they only occasionally extended farther away into the HAZ. The small number of favorably oriented grain boundaries in the HAZ made crack propagation difficult into the HAZ.
Cracks in the present study were caused by the combination of two main factors; mechanically induced strain due to Varestraint test method and a crack susceptible microstructure. It was observed in the welded samples that cracks initiated in the PMZ which is the region adjacent to the fusion line and where the temperatures are sufficiently high to produce melting along the grain boundaries. During re-solidification in this partially melted region liquation of precipitates, residually existed in the SLM as-built microstructure, occurs [4]. This allows the formation of the liquid on the grain boundaries that become susceptible to hot crack formation upon application of the strain during the Varestraint test.
Thus, it is possible to have less HAZ cracking if the SLM-manufactured material is welded parallel to the building direction and along the elongated grain orientation to avoid high angle grain boundaries favorably oriented transversely in the HAZ.

The authors gratefully acknowledge the financial support from The Swedish National Space Board and VINNOVA (National Space Research Program and National Aerospace Research Program). We also acknowledge GKN Aerospace Filton, United Kingdom for providing us selective laser melted Alloy 718 specimens for the present study. The support and input from GKN Aerospace Sweden AB is also acknowledged. Special thanks to Kjell Hurtig at University West for his help in Varestraint testing and to Nitesh Raj Jaladurgam at Chalmers University of Technology, Sweden for his help in EBSD analysis. 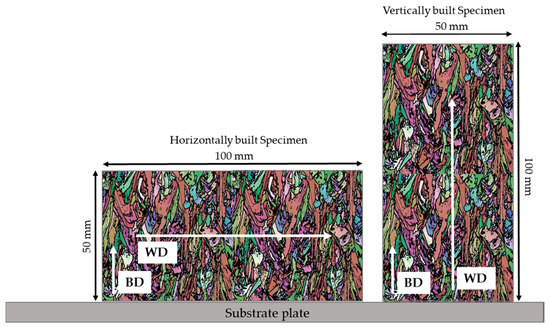 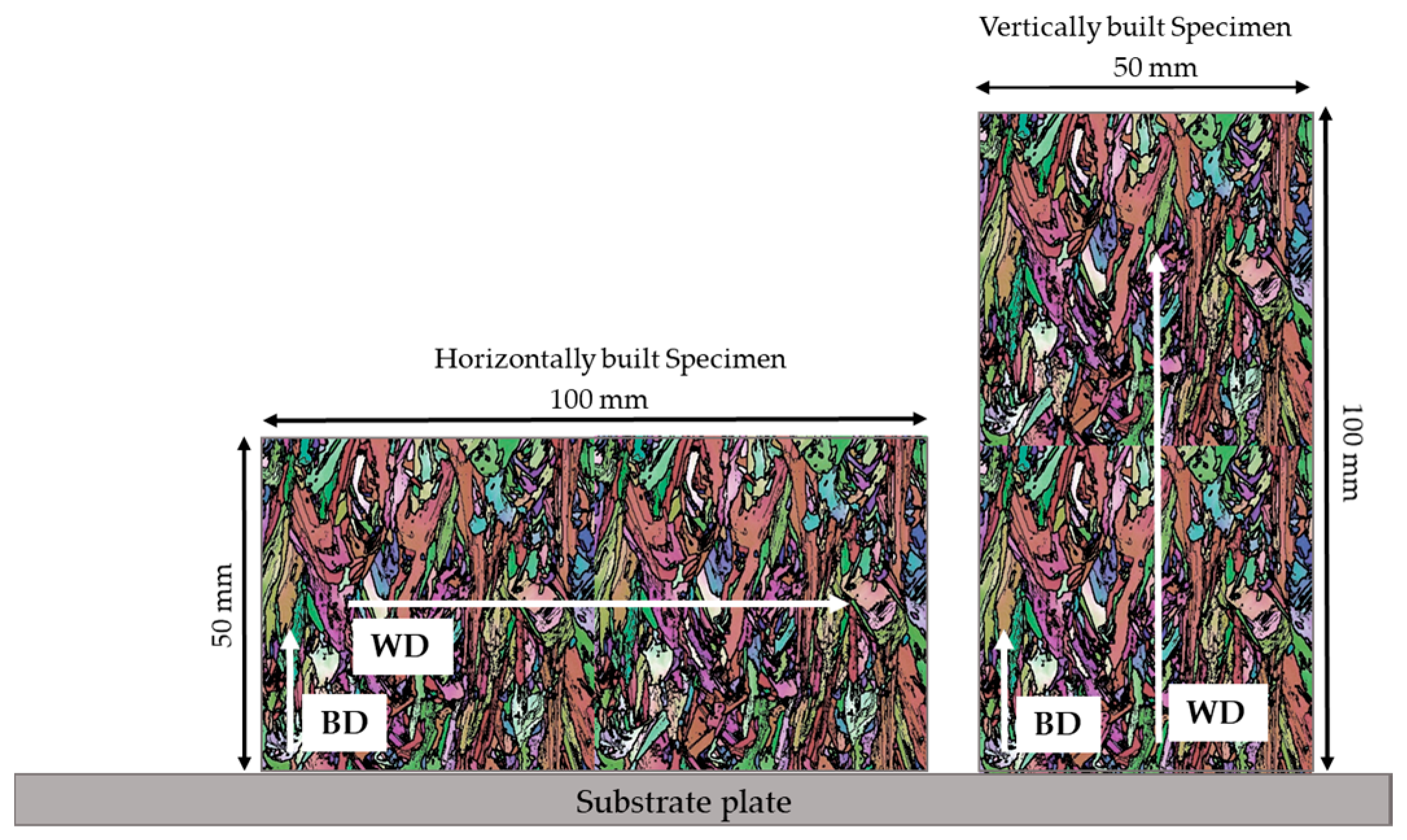 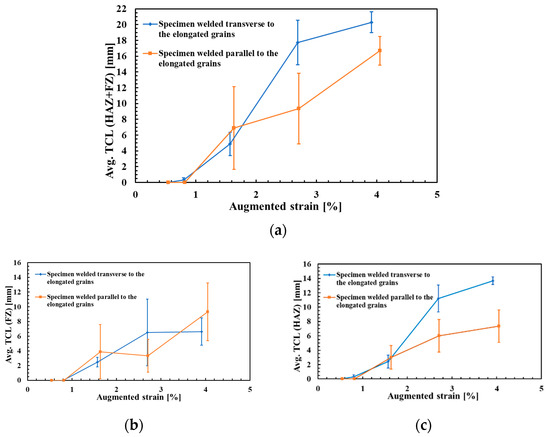 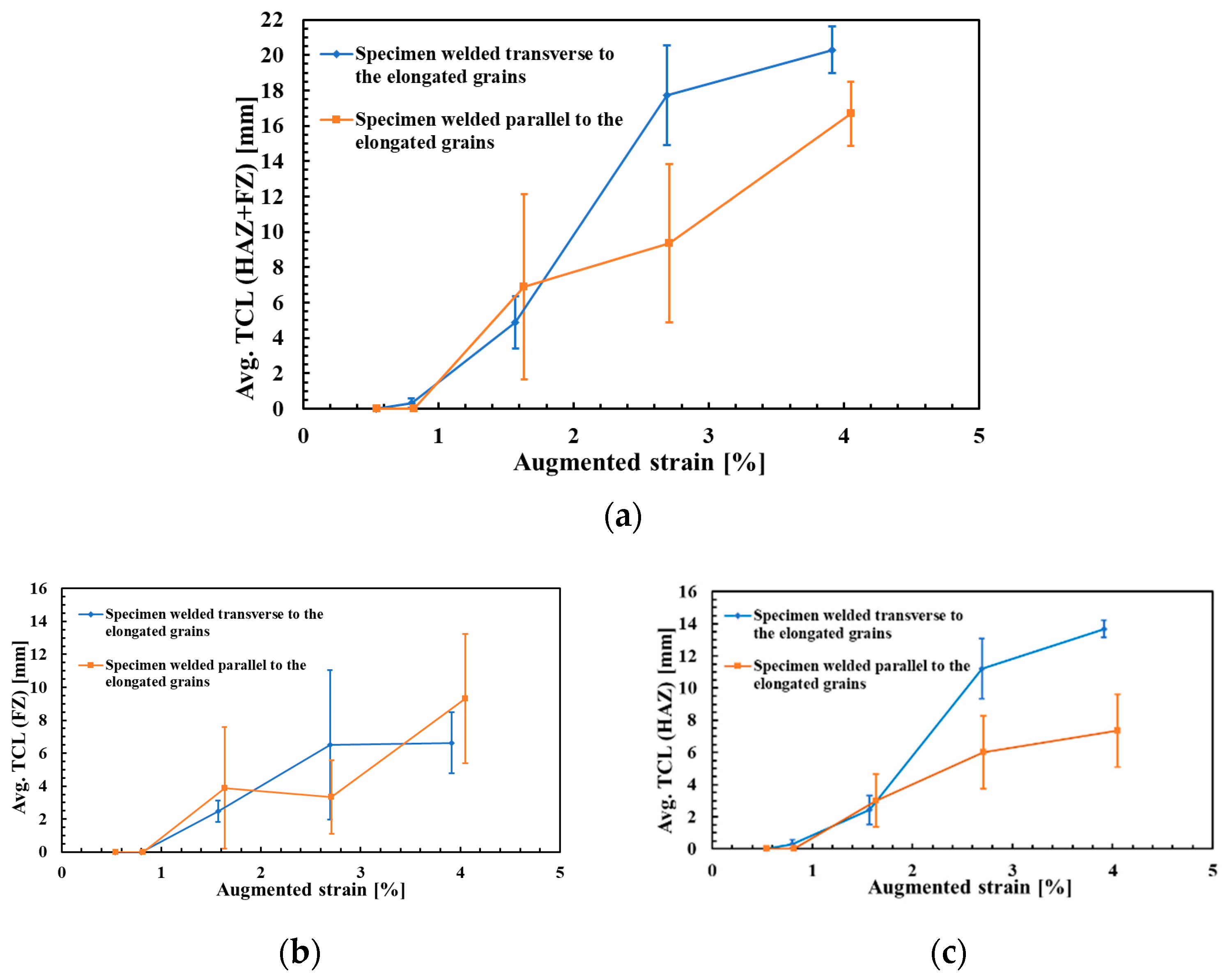 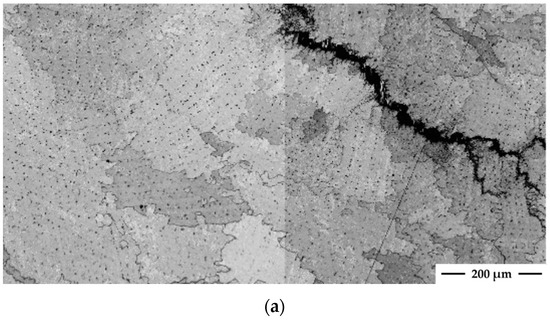 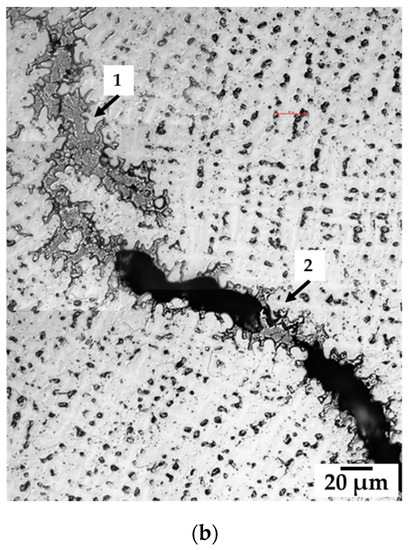 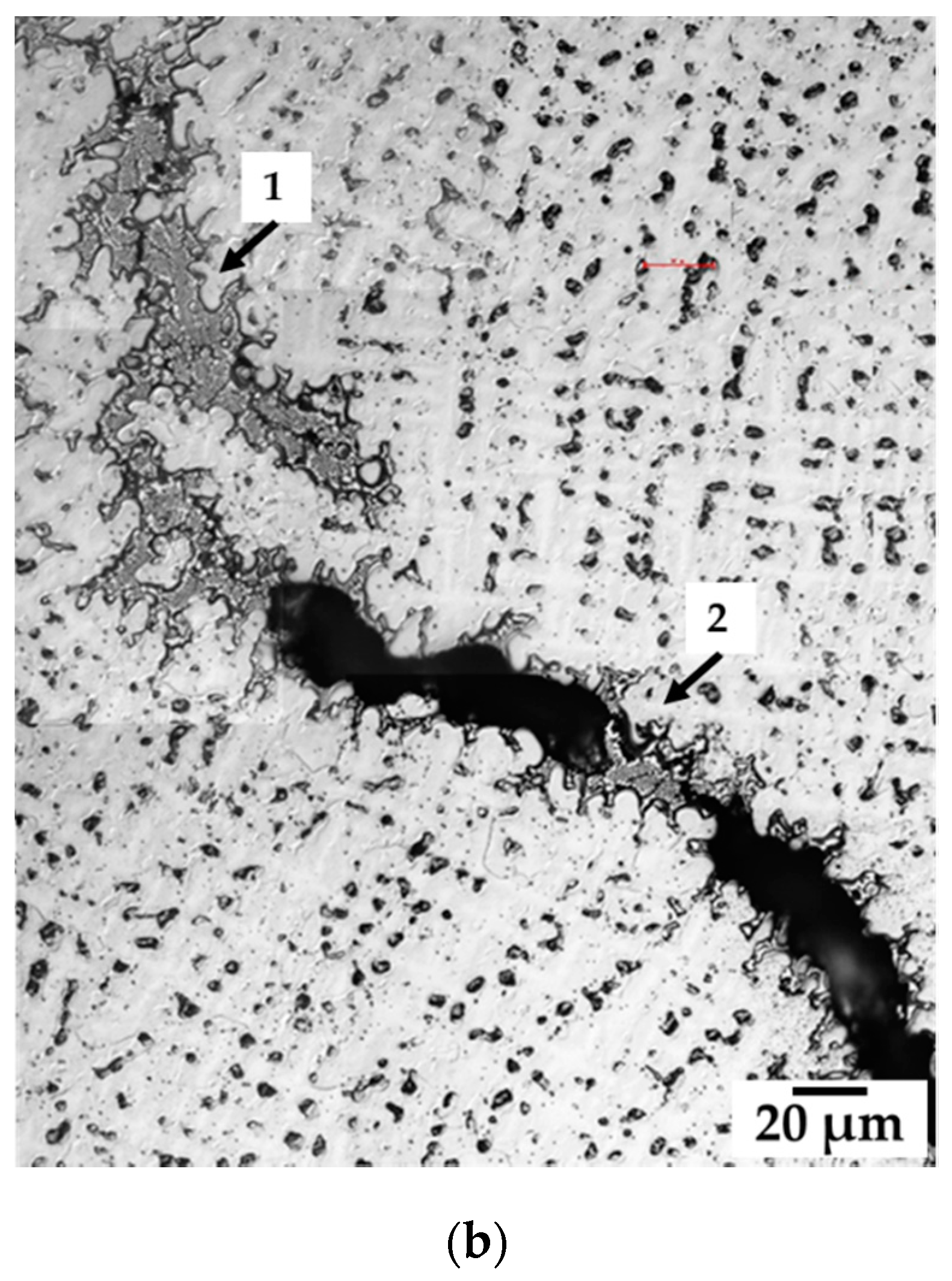 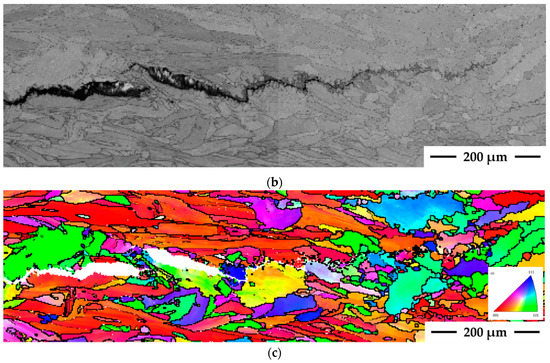 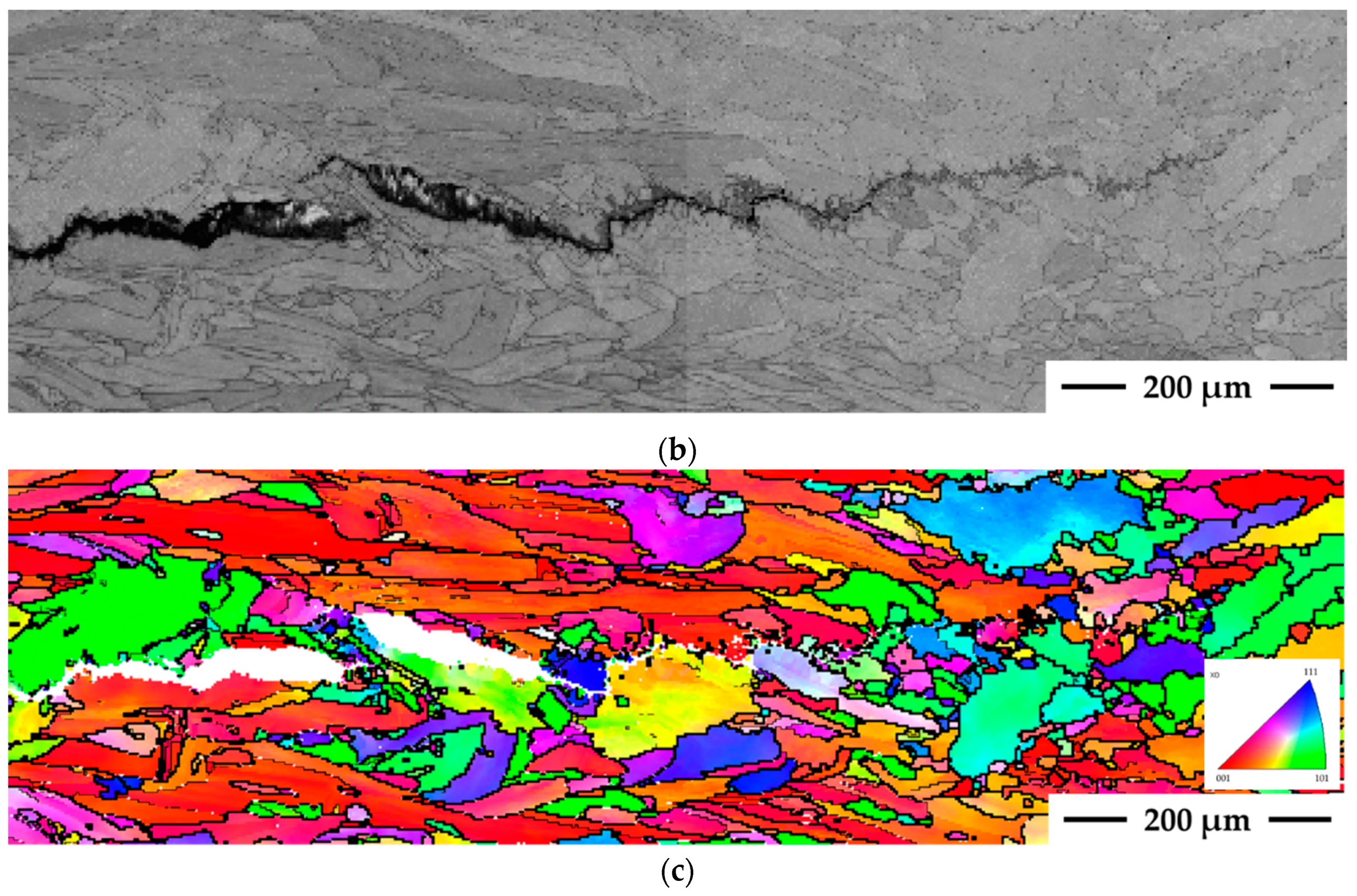 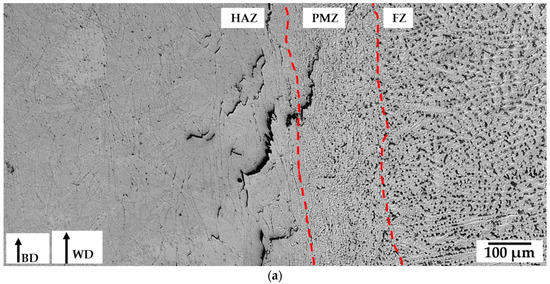 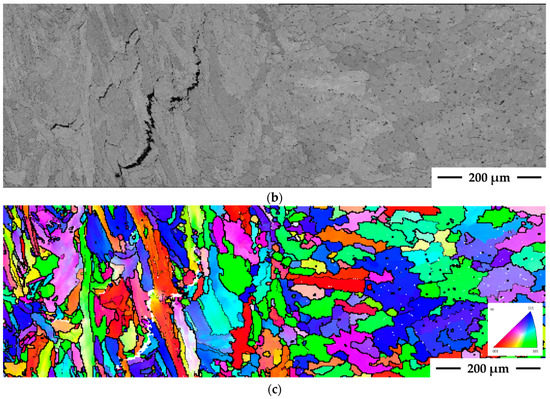 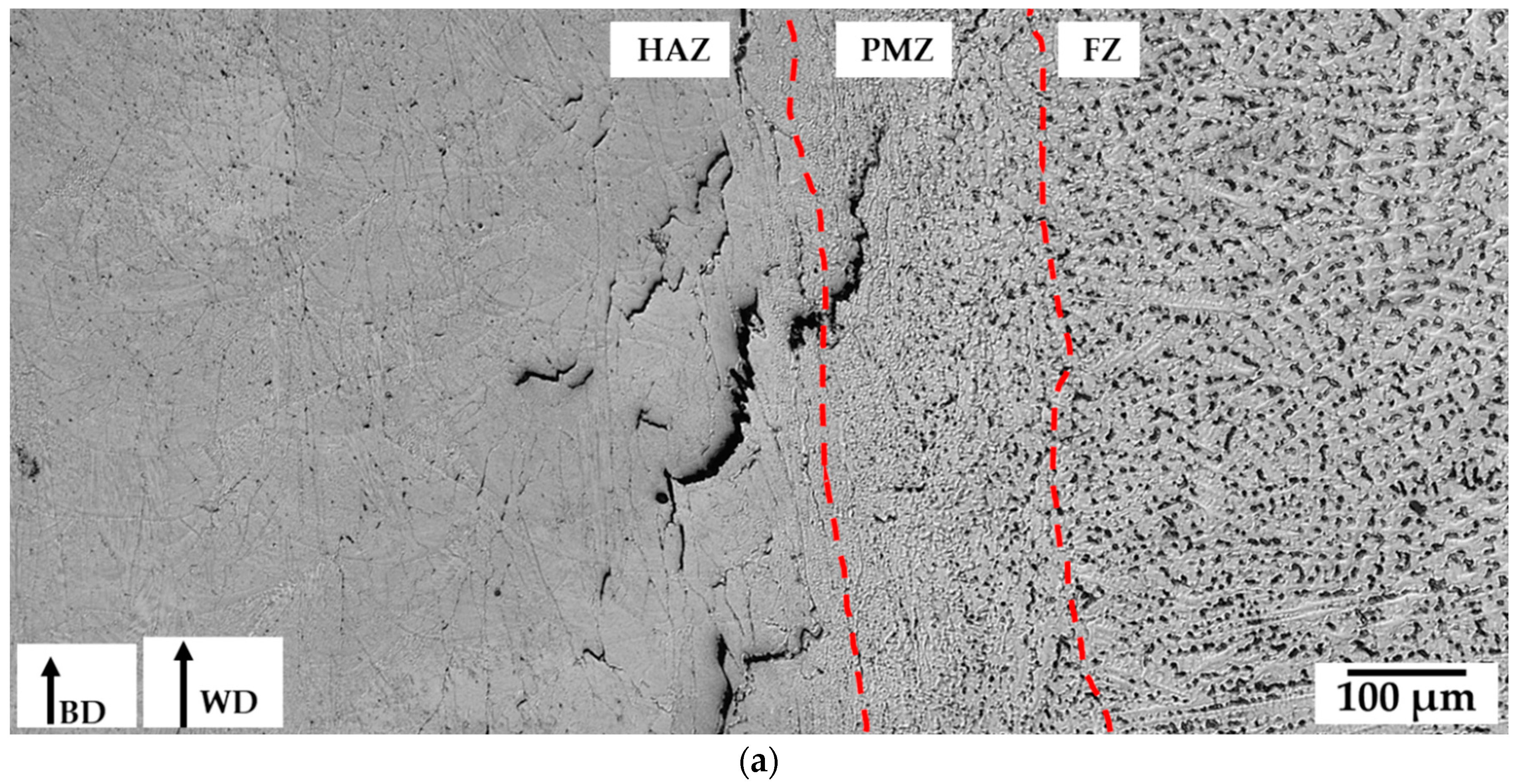 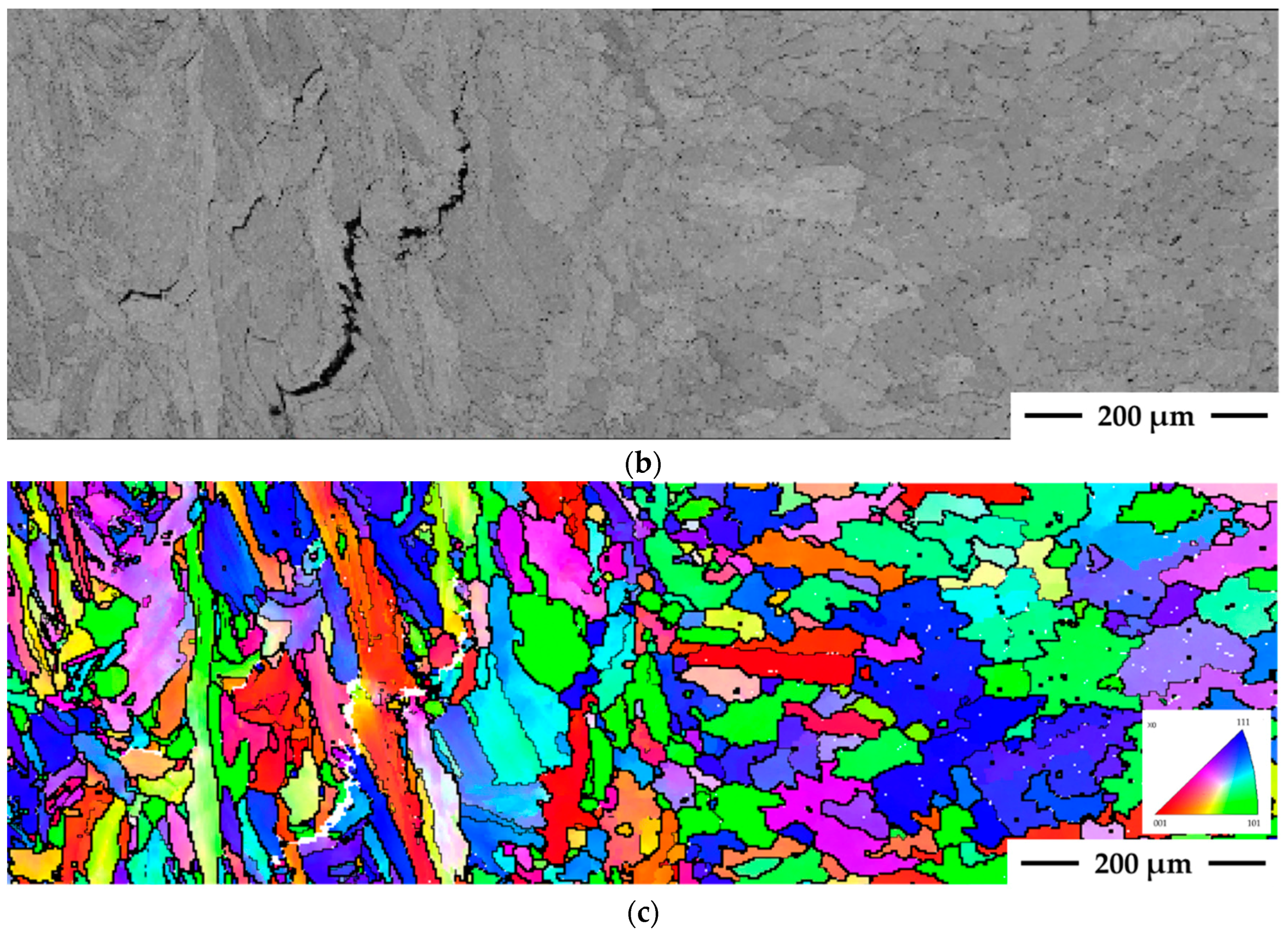