We modeled pure Fe using the Meyer–Entel interaction potential [14], as it implements the phase transition between the - and -phases of Fe [28]. It has been used repeatedly to study the atomistic details of the martensitic and austenitic transformations in Fe and Fe alloys [11,15,16,17,20,23,29]. The equilibrium transition temperature of the – transition amounts to K for this potential, as was determined by both free-energy calculations [18,28] and dynamic MD simulations [11,13].
This potential allows us to build both stable face-centered-cubic (fcc) and body-centered-cubic (bcc) crystals at the appropriate temperatures. For our simulations, we used cubic samples with a size of approximately 182 Å × 182 Å × 182 Å containing roughly 500,000 atoms (bcc sample) and 172 Å × 172 Å × 172 Å containing 432,000 atoms (fcc sample). The edges of the simulation box were aligned with the crystal axes. Periodic boundary conditions were applied in the x and y directions. In the z direction, free surfaces were introduced so as to implement a thin-film geometry.
For introducing dislocations into the crystal, we proceeded as follows. First, straight edge dislocations were introduced using the edge2 algorithm of the free software atomsk [30]. As a second step, these dislocations were relaxed by annealing at a high temperature. The fcc samples were annealed for 100 ps at 1000 K, while the bcc samples could only be heated up to 500 K without transforming; they were also annealed for 100 ps and then cooled back to 10 K. After relaxation, the initially straight edge dislocations had reacted with each other and formed a dislocation network. The dislocations were of a mixed type of edge and screw dislocation. During relaxation, the network lost around 50 % of its length both in the fcc and bcc crystallites.
We measured the dislocation density by dividing the total dislocation line length by the volume V of the sample:
In total, we constructed 20 bcc and 20 fcc samples with various starting numbers of edge dislocations and various dislocation configurations. After annealing, the bcc crystals used for our simulations had dislocation densities of between and cm; as more dislocations can be introduced into fcc crystals, their value varied between and cm.
In Figure 1a,b, an example of a relaxed bcc sample with a dislocation density of cm is shown, and similarly in Figure 1c,d is an example of an fcc sample with a dislocation density of cm.
The martensitic phase transformation was studied by cooling the fcc crystal from its start temperature of 1000 K down to almost 0 K. Analogously, the austenitic transformation was simulated by heating the bcc crystals from their starting temperature of 10 K up to 1300 K. In each case, the heating/cooling rate amounted to 1 K/ps. It is known [15] that simulated transformation temperatures depend on the heating/cooling rates applied; higher rates delay the transformation. From simulations of selected systems, we expected that this effect would change our results by around 30 K when reducing the rate by a factor of 10; for even smaller rates, the influence would become negligible. The occurrence of the phase transformation is monitored via the change of the system volume, or equivalently, by one of its edge lengths: a sudden jump in the volume identifies the transition temperature [21,22].
We performed the calculations using the open-source Large-scale Atomic/Molecular Massively Parallel Simulator (LAMMPS) code [31]. The temperature control was performed by using the Nose–Hoover thermostat [32,33]. During this process, we kept the pressure components in each Cartesian direction constant using a barostat. For the atomistic analysis, we used the free software tool Open Visualization Tool (OVITO) [34]. The local crystal structure was analyzed using the common-neighbor analysis [35,36]. For an analysis of the dislocation network, we used the dislocation extraction analysis algorithm (DXA) [37].

3.3. Dislocations in the Transformed Phase

Using MD simulation, we studied the influence of pre-existing dislocations on the martensitic and austenitic phase transformations in pure iron. The simulations were performed in a thin-film geometry with (100) surfaces. We found the following results.

J.M. performed the simulations and analyzed the results. J.M. and H.M.U. designed the work, discussed the results, and wrote the manuscript.

This research was funded by the Deutsche Forschungsgemeinschaft (DFG, German Research Foundation)—Projektnummer 172116086—SFB 926 and the SFB/TRR 173 (Projektnummer 268565370).

Access to the computational resources provided by the compute cluster ‘Elwetritsch’ of the University of Kaiserslautern is appreciated. 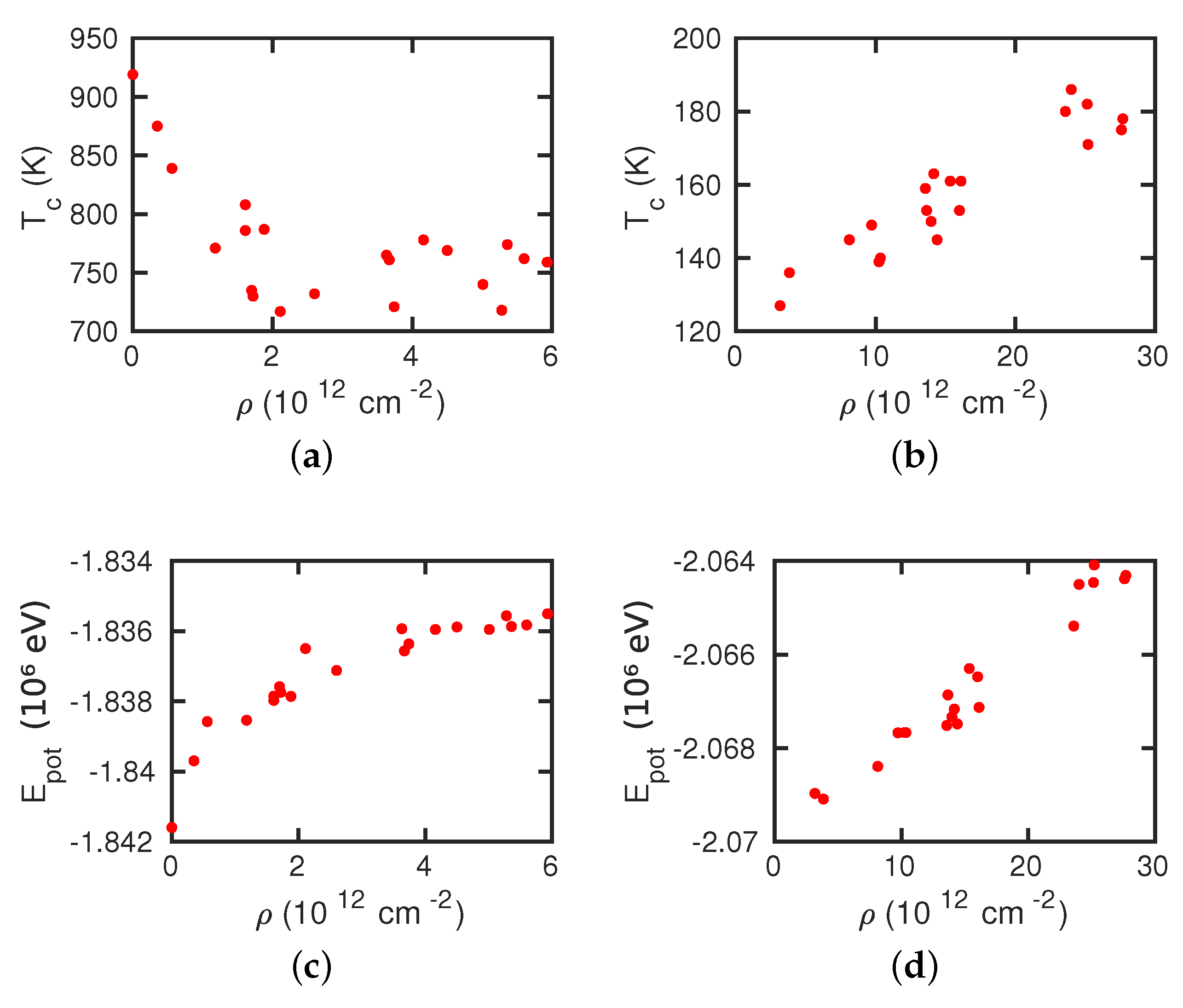 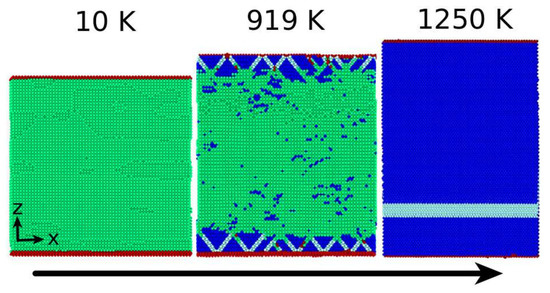 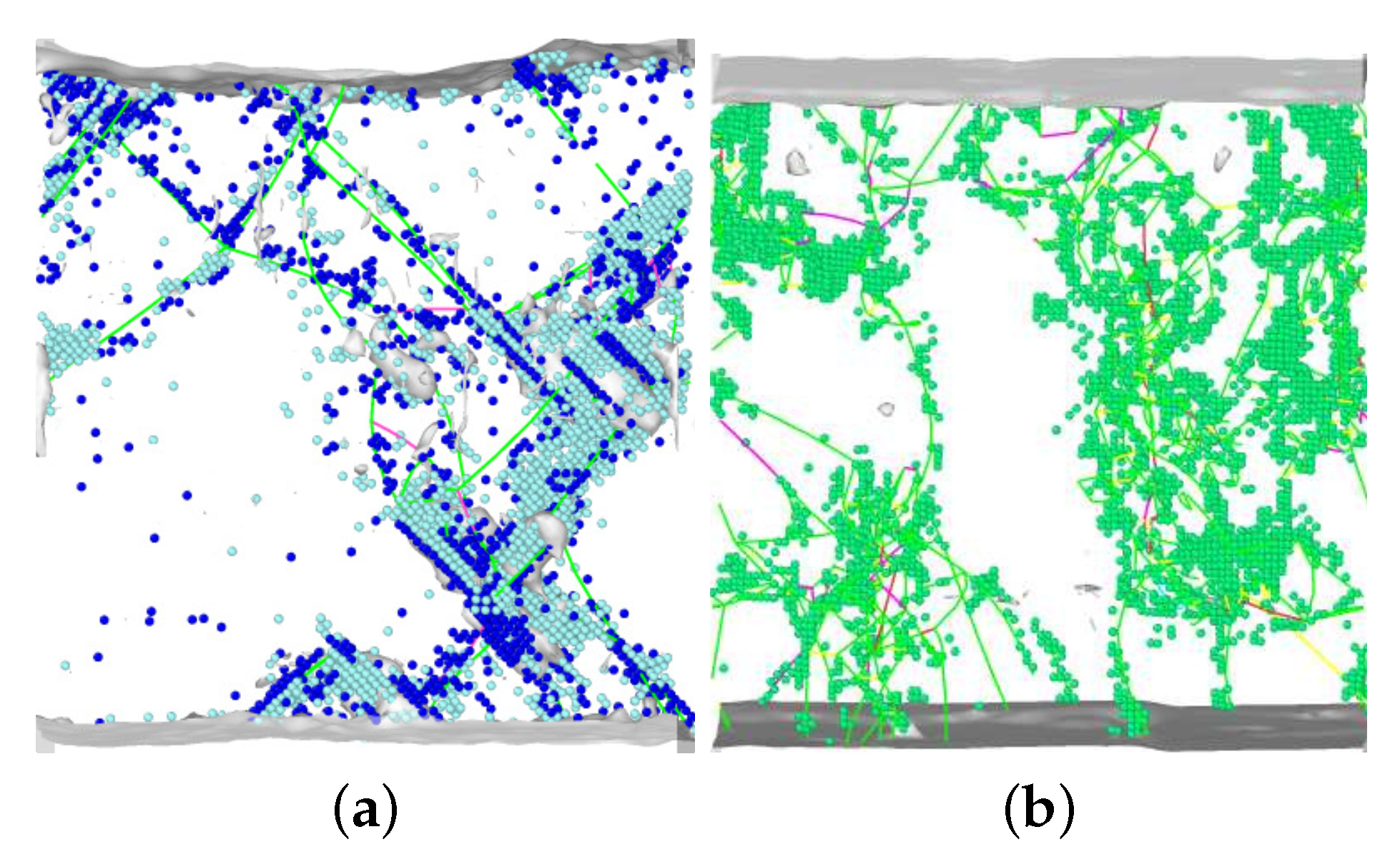