Three different forms of Cu powder particles obtained by either galvanostatic electrolysis or a non-electrolytic method were analyzed by a scanning electron microscope (SEM), X-ray diffraction (XRD) and particle size distribution (PSD). Electrolytic procedures were performed under different hydrogen evolution conditions, leading to the formation of either 3D branched dendrites or disperse cauliflower-like particles. The third type of particles were compact agglomerates of the Cu grains, whose structural characteristics indicated that they were formed by a non-electrolytic method. Unlike the sharp tips that characterize the usual form of Cu dendrites, the ends of both the trunk and branches were globules in the formed dendrites, indicating that a novel type of Cu dendrites was formed in this investigation. Although the macro structures of the particles were extremely varied, they had very similar micro structures because they were constructed by spherical grains. The Cu crystallites were randomly oriented in the dendrites and compact agglomerates of the Cu grains, while the disperse cauliflower-like particles showed (220) and (311) preferred orientation. This indicates that the applied current density affects not only the morphology of the particles, but also their crystal structure. The best performance, defined by the largest specific surface area and the smallest particle size, was by the galvanostatically produced powder consisting of disperse cauliflower-like particles. View Full-Text
Keywords: copper; powder; electrolysis; hydrogen; SEM; XRD; PSD copper; powder; electrolysis; hydrogen; SEM; XRD; PSD
►▼ Show Figures 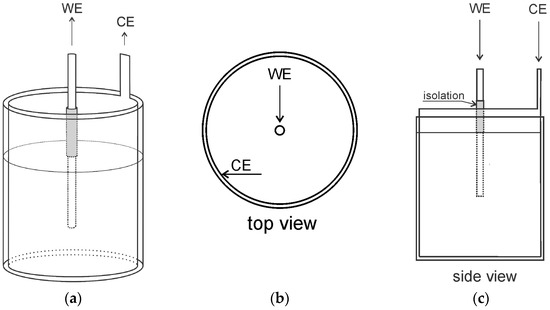