Evolution of Ternary AuAgPd Nanoparticles by the Control of Temperature, Thickness, and Tri-Layer

Metallic alloy nanoparticles (NPs) possess great potential to enhance the optical, electronic, chemical, and magnetic properties for various applications by the control of morphology and elemental composition. This work presents the fabrication of ternary AuAgPd alloy nanostructures on sapphire (0001) via the solid-state dewetting of sputter-deposited tri-metallic layers. Based on the systematic control of temperature, thickness, and deposition order of tri-layers, the composite AuAgPd alloy nanoparticles (NPs) with various shape, size, and density are demonstrated. The metallic tri-layers exhibit various stages of dewetting based on the increasing growth temperatures between 400 and 900 °C at 15 nm tri-layer film thickness. Specifically, the nucleation of tiny voids and hillocks, void coalescence, the growth and isolated nanoparticle formation, and the shape transformation with Ag sublimation are observed. With the reduced film thickness (6 nm), tiny alloy NPs with improved structural uniformity and spatial arrangement are obtained due to enhanced dewetting. The growth trend of alloy NPs is drastically altered by changing the deposition order of metallic tri-layers. The overall evolution is governed by the surface diffusion and inter-mixing of metallic atoms, Rayleigh-like instability, surface and interface energy minimization, and equilibrium state of the system. The UV-VIS-NIR reflectance spectra reveal the formation of an absorption band and reflectance maxima at specific wavelengths based on the morphology and composition of AuAgPd alloy NPs. In addition, Raman spectra analysis shows the modulation of intensity and peak position of natural vibration modes of sapphire (0001).
Keywords: AuAgPd alloys; solid-state dewetting; alloy nanoparticles; sapphire (0001); plasmonics AuAgPd alloys; solid-state dewetting; alloy nanoparticles; sapphire (0001); plasmonics

Multi-metallic alloy NPs have garnered considerable research interest because of their wide range of structural and elemental tunability and functional diversity, making them applicable in many nanodevices and -technologies [1,2,3,4,5,6]. In addition, the electronic heterogeneity, site-specific response, and combinational effect of constituent metals are some interesting features of the alloy NPs, which could not be achieved with monometallic NPs. At the same time, the alloy NPs can provide additional flexibility for tuning optical [7,8], catalytic [9,10,11,12,13], electronic, and magnetic [14,15,16] properties by controlling shape, size, and density [17] as well as elemental composition. In particular, the localized surface plasmon resonance (LSPR) frequency of alloy NPs can be modulated through the composition variation, which potentially enables many applications in the plasmonic, energy, and biomedical fields. For instance, the durability of Pd-based nanocatalysts has been significantly improved by the addition of Au in the NPs [18] and the incorporation of Pd into Ag NPs can demonstrate a red shift of plasmon resonance peak from 440 to 732 nm along with the increased Pd composition [19]. In recent years, monometallic Au, Ag, and Pd NPs have been successfully utilized in many fields owing to their promising plasmonic and catalytic properties; therefore, the fabrication of AuAgPd alloy NPs can offer novel application as well as improved performance of existing applications [20,21,22]. The systematic fabrication of ternary AuAgPd alloy NPs with tunable surface morphology and elemental composition, however, has not been reported in the literature. In this study, the AuAgPd alloy NPs’ growth is demonstrated on c-plane sapphire (0001) via the solid-state dewetting of tri-metallic thin films. The solid-state dewetting is a process of transformation of a continuous thin film into isolated particles or droplets by means of atomic diffusion, which has been extensively used to fabricated substrate-supported nanostructures [17,23]. The atomic diffusion can initiate the dewetting process by the nucleation of holes in the film upon heating. Then, along with elevated temperature or time of heating, the holes grow larger due to the hole edge retraction, resulting in the formation of ligaments and finally of particles due to the Rayleigh-like instability. The overall transformation occurs at solid state, which is driven by the energy minimization of the thermodynamic system. The structure, shape, size, and orientation of the resulting nanostructures mainly depend upon the initial film thickness, temperature, and duration of annealing. Therefore, in this work, controlled thermal energy is employed to induce the successful dewetting of sputter-deposited tri-metallic thin films below the melting temperature. Depending upon the annealing temperature, initial film thickness, and deposition sequence, various composite alloy NPs are obtained, which are discussed based on the related growth mechanism and models. The surface morphologies, elemental composition, and optical properties are investigated by using atomic force microscope (AFM), a scanning electron microscope (SEM), an energy-dispersive X-ray spectroscope (EDS), and reflectance spectroscopy, correspondingly.

Sapphire (0001) wafers used in this work were ~430 µm thick with ±0.1° off-axis (iNexus Inc., Seoul, South Korea). Initially, sapphire wafers were diced into square pieces (6 × 6 mm2) using a mechanical saw. Degassing was performed at 900 °C for 30 min under 1 × 10−4 Torr in a pulsed laser deposition (PLD) chamber. The surface contaminants, dust particles, and oxide particles were expected to be removed and a smooth surface texture was observed by AFM scanning after degassing, as shown in Figure A1a,b. In addition, the Raman characteristic showed six active phonon modes that resemble the natural phonon modes of sapphire, as shown in Figure A1c. Then, metal layers of Au, Ag, and Pd were sequentially deposited on sapphire (0001) from high-purity (99.999%) metal targets using plasma sputtering. The deposition condition was identical for all metal layers with a deposition rate of 0.01 nm·s−1 and ionization current of 5 mA under 1 × 10−1 Torr chamber pressure. In the first set, Au, Ag, and Pd layers were sequentially deposited with a 5 nm thickness of each layer (Au/Ag/Pd). Similar deposition order of Au/Ag/Pd with 6 nm total thickness (2 nm of each layers) was also prepared to study the effect of a lower thickness. Furthermore, the deposition order was altered to Pd/Au/Ag with 6 nm total thickness to observe the deposition order effect. Following the deposition of metallic multilayers, samples were transferred to a PLD chamber for annealing at various temperatures between 400 and 900 °C. For the growth of nanostructures at specific temperatures, individual samples were annealed. In order to maintain the consistency, the annealing process was controlled by computer-operated recipes and the target temperature was attained at a ramping rate of 4 °C·s−1. After reaching the target temperature, the dwelling duration of 450 s was equally applied for each sample. To finish the fabrication, the heating system was turned off and samples were kept inside a vacuum until the temperature dropped to ambient.

In summary, the evolution of various configuration of self-assembled AuAgPd alloy NPs from the sputter-deposited tri-layers on sapphire (0001) was demonstrated by means of the solid-state dewetting approach. Based on the control of tri-layer thickness, temperature, and deposition order, the alloy NPs were significantly varied in terms of configurations, size, and spatial arrangement. The overall dewetting sequence of as-deposited tri-metallic thin film with 15 nm total thickness exhibited the various steps of dewetting: void initiation, void growth, and cluster breakdown with increasing temperature. With low deposition thickness, i.e., 6 nm, semi-spherical alloy NPs with uniform surface coverage, size, and spatial homogeneity were obtained by the enhanced dewetting of thin tri-layers. On the other hand, the change in disposition order drastically altered the dewetting process under identical growth conditions, in correlation with the distinct binding energy with the substrate and the diffusivity of metals. The formation of composite alloy NPs was attributed to the surface diffusion and inter-mixing of tri-metallic layers by thermal energy and driven by the surface and interface energy minimization to gain equilibrium configuration. Furthermore, Ag sublimation at a relatively high temperature was found to affect the surface morphology and elemental composition of alloy NPs. The optical characterization by reflectance spectra demonstrated a reverse relationship between the average reflectance and the surface coverage of sapphire by alloy NPs, and an absorption band and peaks were formed at specific wavelengths based on the surface morphology, e.g., peaks in the UV and NIR regions and a wide absorption band in the visible region, whereas small NPs (<200 nm) exhibited broadband absorption. The peak intensity showed high dependency on the Ag content of alloy NPs. 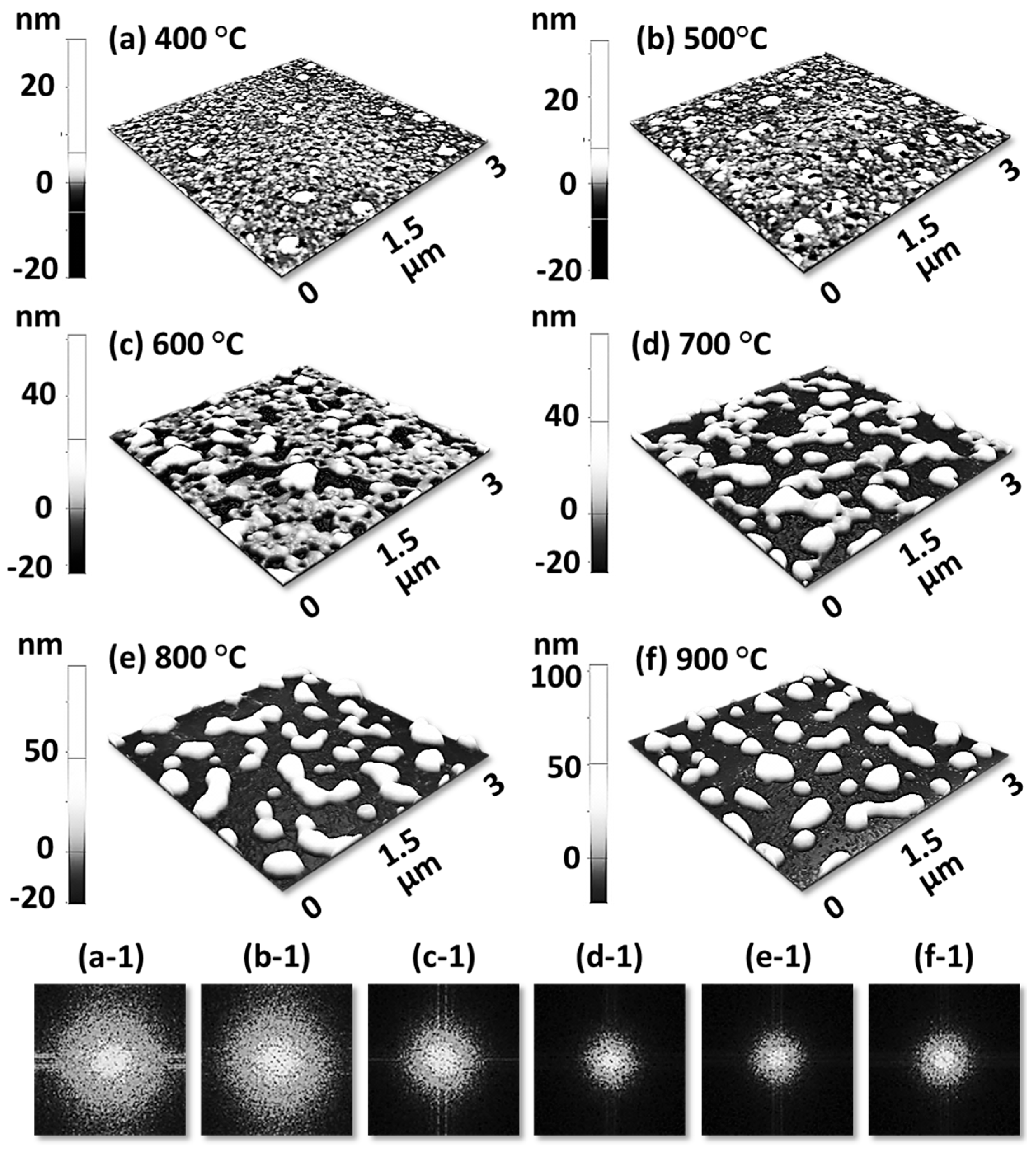 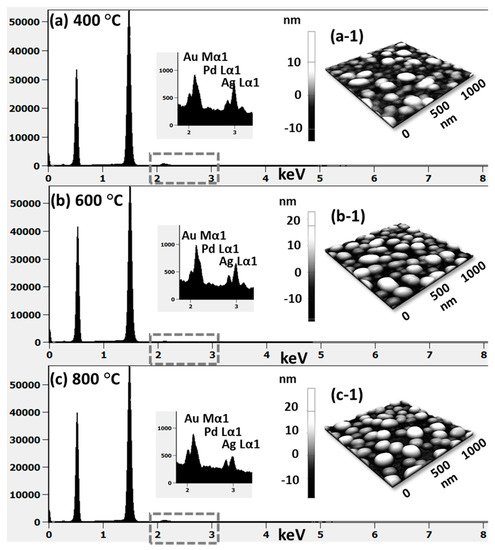 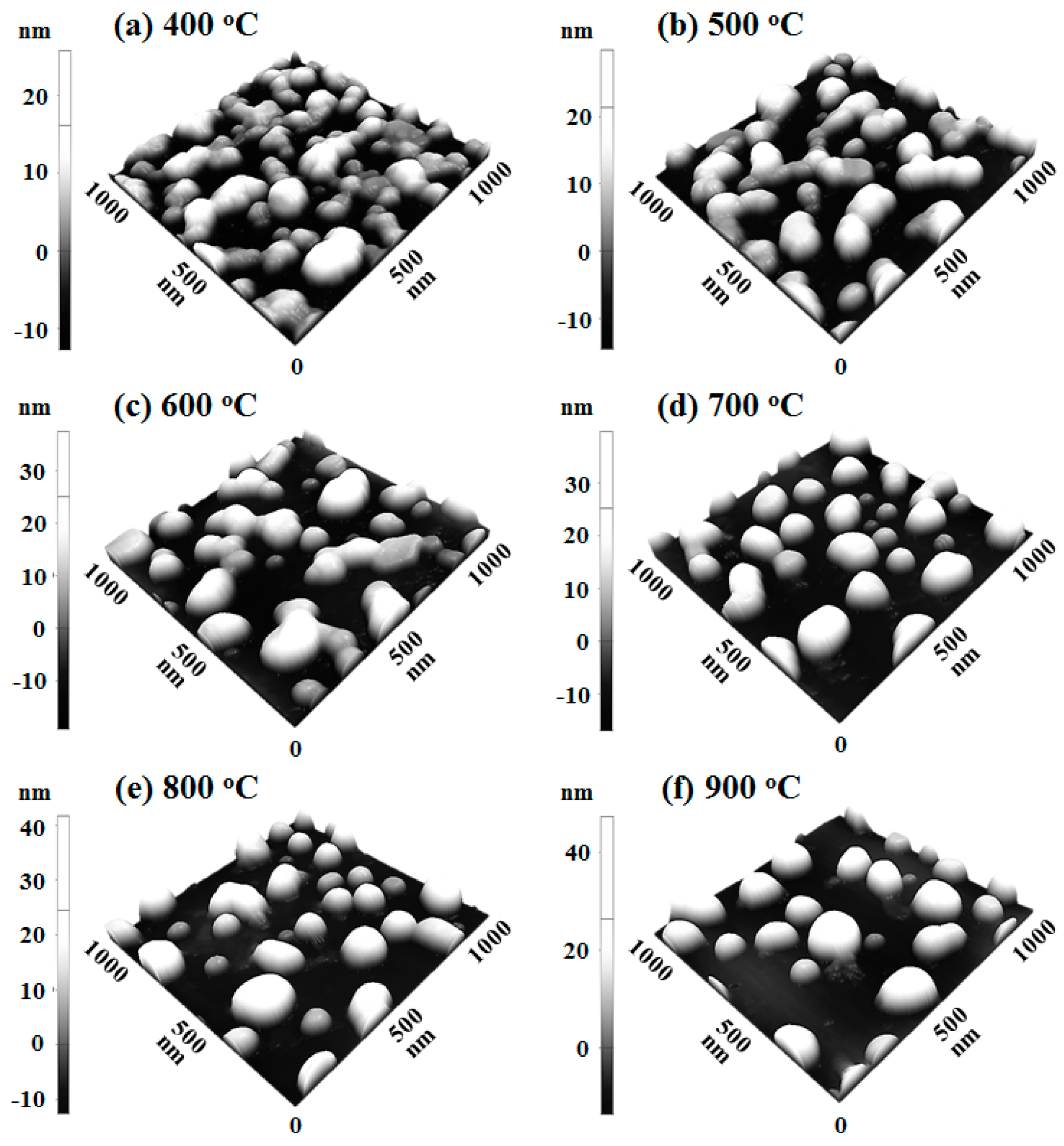 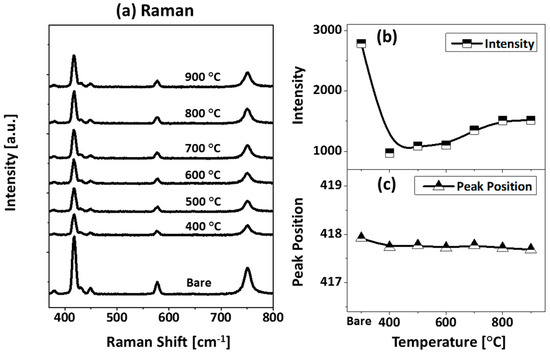 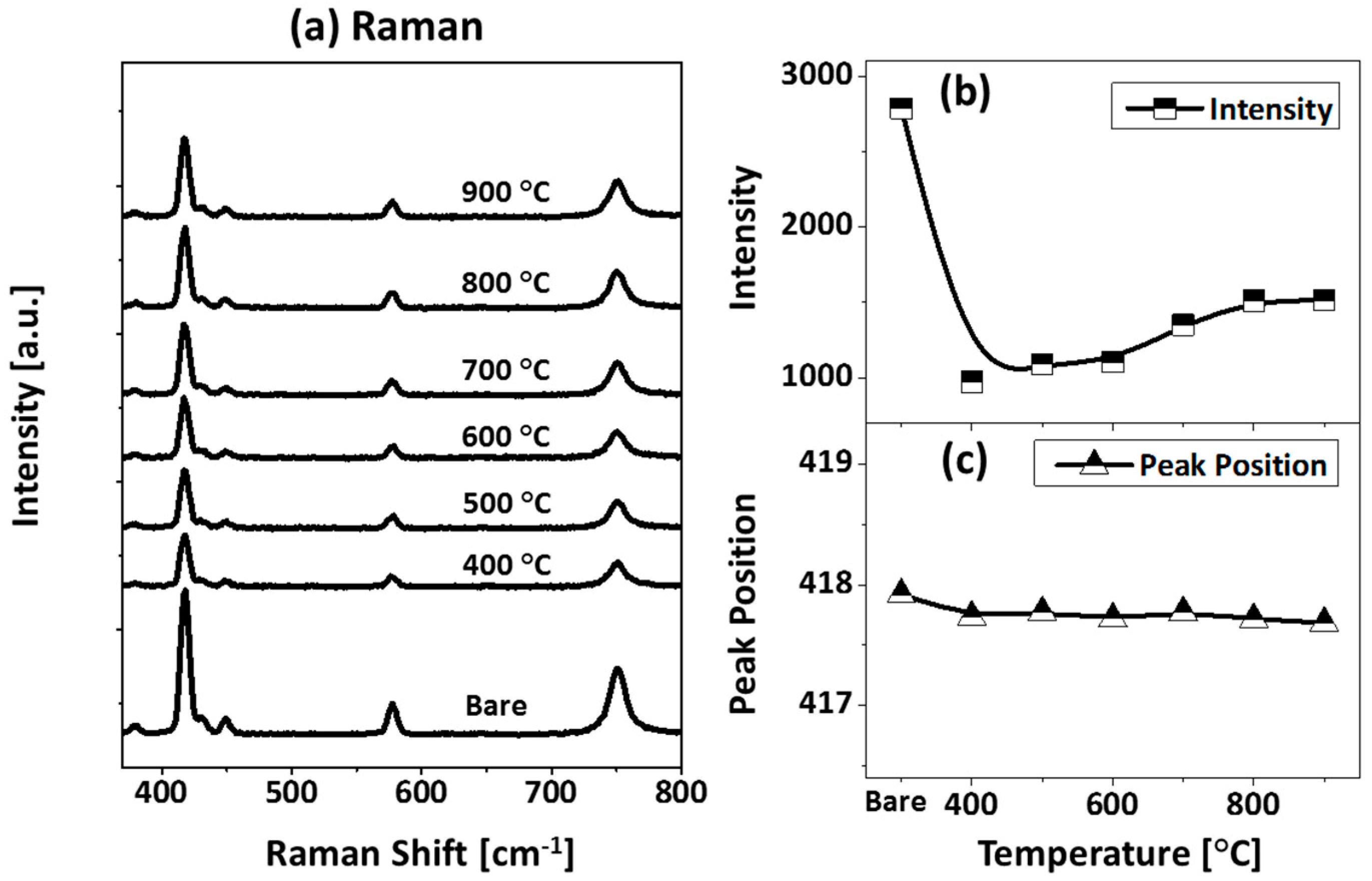 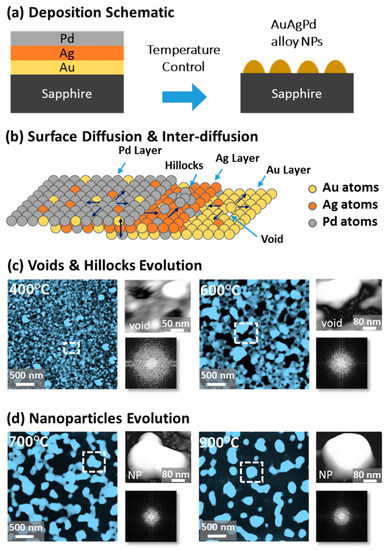 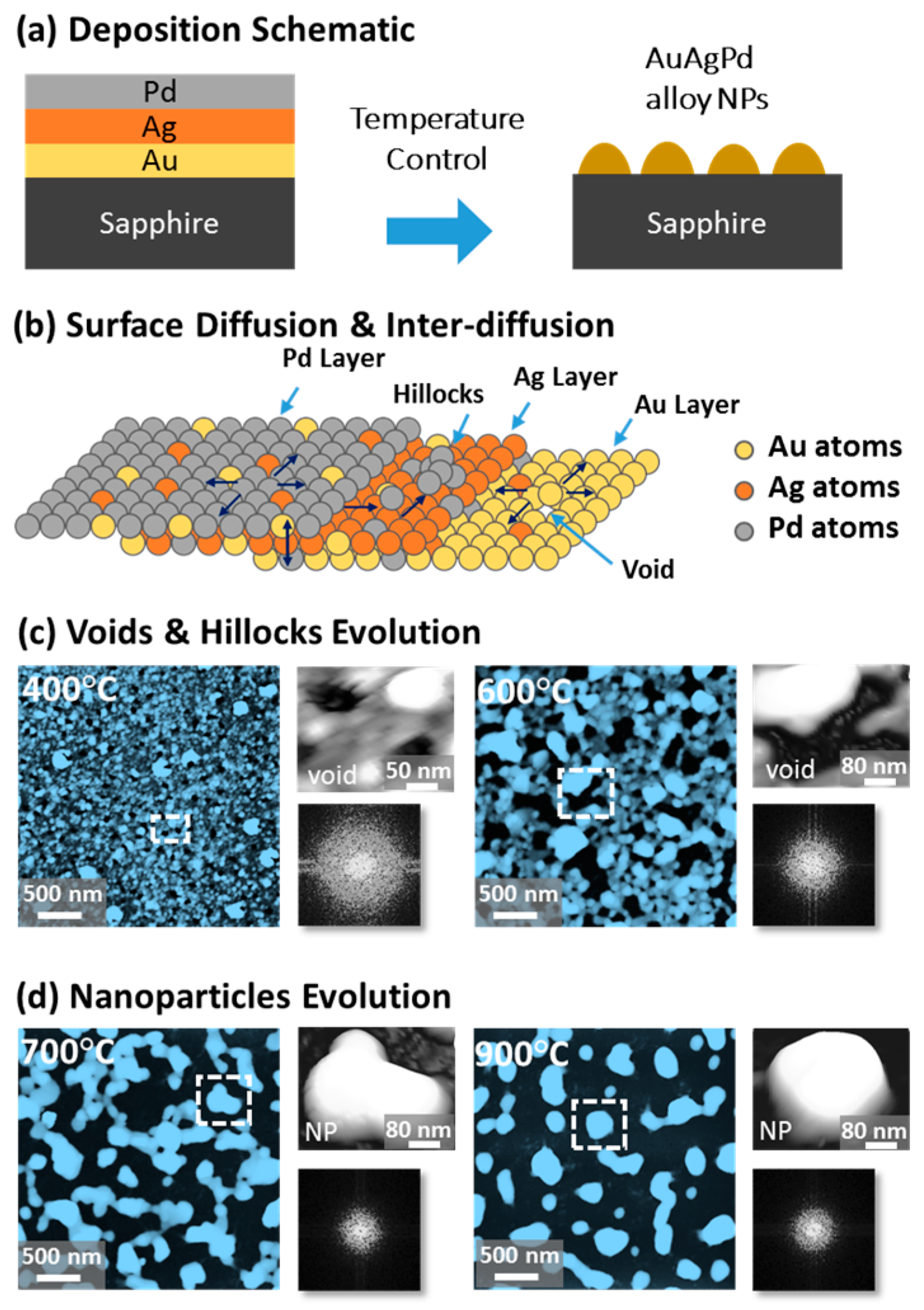 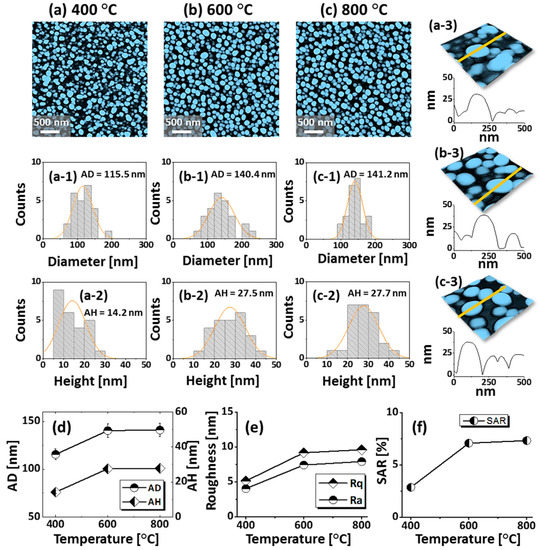 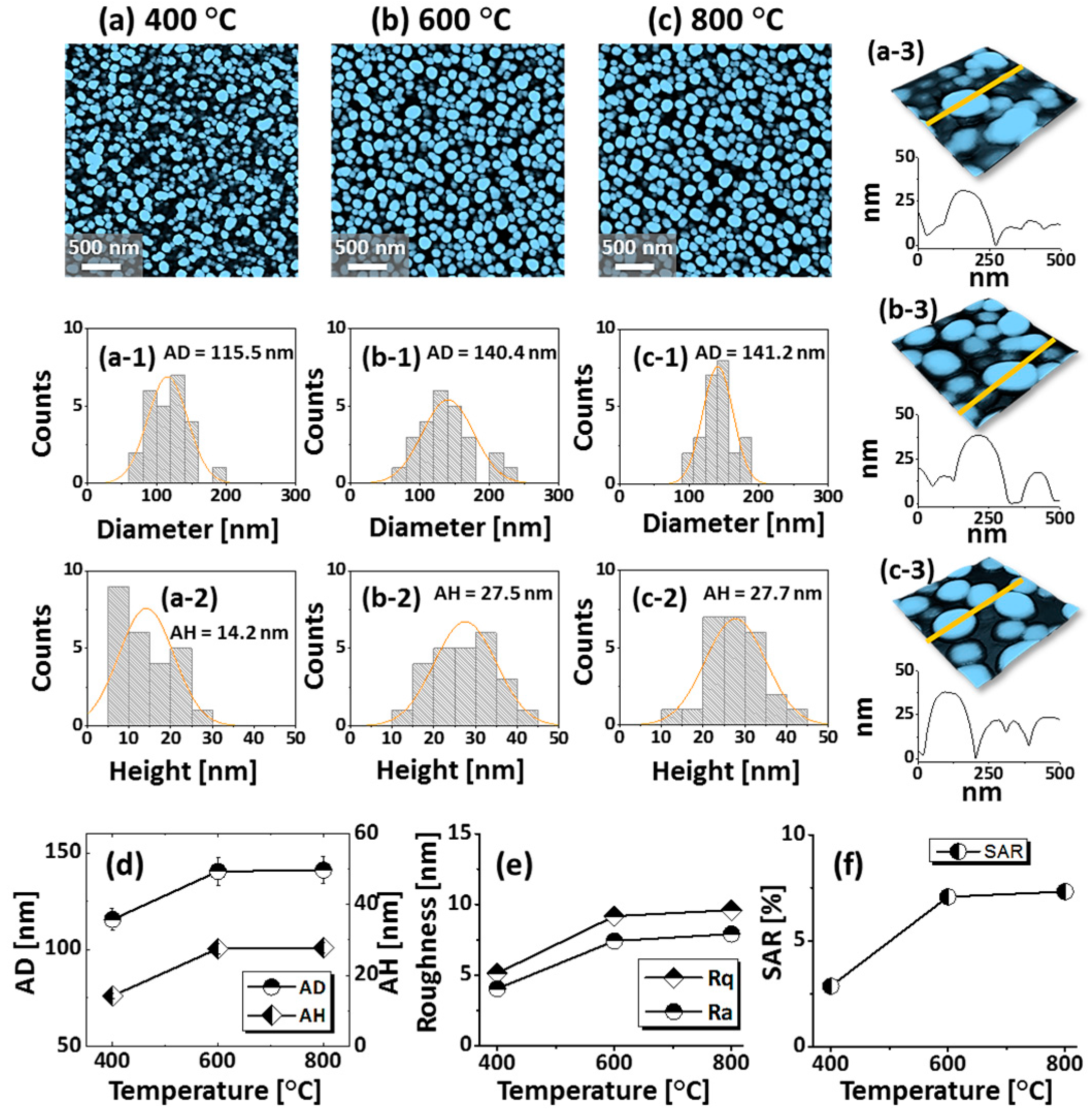 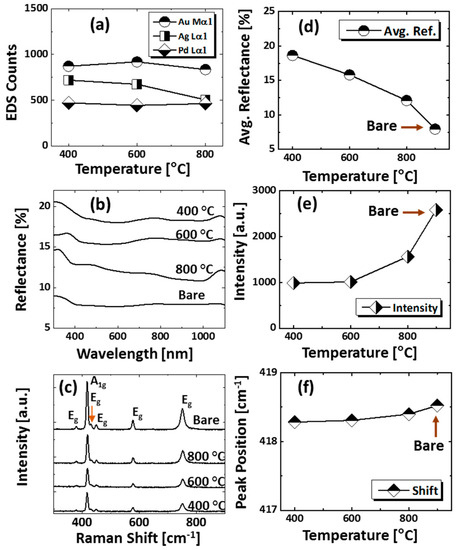 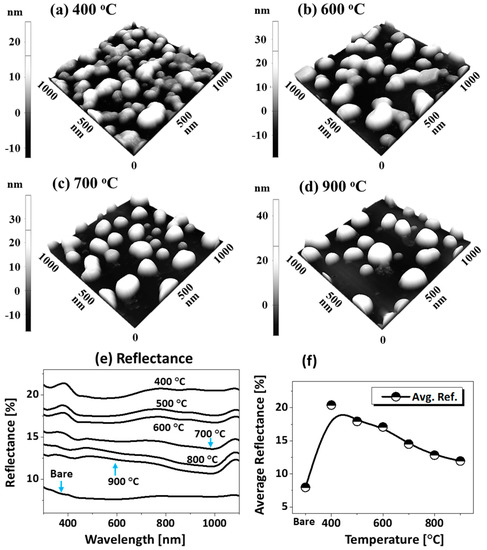