Martensitic steel 22MnB5 was chosen as the experimental material. This material is a typical representative of press-hardened steels, which combines good formability with high strength [19,20,21,22,23,24]. In the automotive industry, these unique material properties are used to reduce BIW while maintaining good crash resistance [25]. Therefore, this material is used as reinforcement in A and B pillars, in bumpers or as cross-members.
The material 22MnB5 is carbon/manganese steel with a small boron content. The chemical composition of the material and basic mechanical properties are shown in Table 1 and Table 2, respectively. The mechanical properties were determined on flat specimens with a cross-section of 1.6 × 3.3 mm2 and a length of the active part of 20 mm. The specimens were cut by waterjet considering the rolling direction.
The microstructure was observed using an Olympus BX61 optical microscope (Olympus, Tokyo, Japan). The specimens were prepared by conventional mechanical grinding on SiC foils in several steps up to a grit size of 1200. This was followed by polishing on cloths with a diamond suspension in steps of 9, 3 and 1 µm. The structure was etched with 3% Nital. The material was in an as-received state after hot rolling and annealing; the microstructure is a combination of ferrite and globular pearlite and is shown in Figure 4.
Seven different Nakajima specimen geometries of standard size were produced from 22MnB5 with a thickness of 1.6 mm for three test repetitions. Depending on the geometry, the testing specimen widths were 20, 40, 60, 80, 100, 120 and 200 mm as shown in Figure 5. The testing setup was designed according to the requirements of the standard ISO 12004 [2]. The tests were performed using an Inova servo-hydraulic testing machine (Inova GmbH, Bad Schwalbach, Germany) equipped with a load cell with a capacity of 200 kN. The punch velocity was set up as 1 mm/s for all the tests. The deformation of each specimen was tracked and evaluated using 4 MPx DIC Aramis software (GOM GmbH, Braunschweig, Germany). For this reason, a stochastic pattern was applied on the surface of each specimen. The lubrication system was several thin layers of polytetrafluoroethylene (PTFE) foil combined with lanolin covering the 100-mm punch diameter.
In the case of the miniaturized FLD specimens, four geometries were adapted using FEA simulation to reach approximately the same proportion of active parts as for standard specimens (4, 8, 16 and 40 mm) (Figure 6). The specimen thickness was not reduced. In this part of the experiment, a punch with a diameter of 10 mm was used. The aim was to obtain a similar strain state as in the standard specimens, i.e., bending stress (not shear stress). The lubrication system was applied to each specimen during the test. Precise measurement of the deformation was carried out using a 12 MPx DIC Aramis system (GOM GmbH, Braunschweig, Germany). The punch velocity was held at 0.2 mm/s to achieve a similar strain rate to a standard specimen.
The results of the evaluation according to the standard section method, time-dependent method, section maximum method and thinning method are discussed below.
The results obtained using standard 20-, 40-, 60-, 80-, 100-, 120- and 200-mm specimens and miniaturized FLD specimens are called “Standard” and “D40”, respectively.

Figure 7 shows the test results evaluated according to the standard section method, time-dependent method, section maximum method and thinning method for standard Nakajima specimens. The FLD evaluation for the standard specimens provides graphs in the expected order, i.e., the ISO standard yields the most conservative results and the time-dependent method gives more progressive values. However, the highest strain values were recorded when using the section maximum and thinning methods, which fall into the category of FFLDs. Figure 8 is a summary of FLDs and FFLDs for miniaturized specimens. The comparison of the strain values obtained from standard and miniaturized specimens is shown in Figure 9.

Nakajima tests were performed with two different punch diameters: 10 and 100 mm. The specimens for miniaturized testing were scaled proportionally in order to obtain material behavior and strain states comparable to standard test results. Furthermore, the specimen thickness was not reduced. Due to the various punch diameters employed in the experiment, the occurrence of different bending conditions could be expected during the test. The bending effect according to formula (1) is dependent on the punch diameter Dpunch and sheet thickness tsheet. This effect increases for higher thickness/punch diameter ratios. The ratio (1) was experimentally established by Affronti [26] and the resulting bending values are shown in Table 3. Due to the smaller punch diameter, the effect increases 10 times. The bending contribution is much lower than the achieved strain limit and is comparable to the standard deviations of test repetition for thicknesses up to 1 mm. This simple formula defines the strain state change between bending and shear stress. In the other words, the bending shifts the fracture strain to higher values. Therefore, the fracture thresholds are probably lower for smaller specimens than for the standard ones.
In general, higher values of FLD were expected for the miniaturized specimens where a smaller punch was used. A similar effect has been described by many authors such as [26,27]. The standard specimens, deformed using a large punch, yielded lower strain values, as demonstrated in Figure 7 and Figure 8. This phenomenon influences the thinning strain limit; however, it does not significantly affect the fracture strain, as demonstrated in Figure 9.
The miniaturized specimens tended to unify the individual evaluation methods. Namely, the results of evaluation using the time-dependent method (FLD) and the section maximum (FFLD) approach are almost identical. An explanation for this can be found in the punch geometry for the miniaturized testing setup, namely in the ratio between the thickness of the material and the radius of the punch. As demonstrated in many studies dealing with specimen miniaturization [27], the transferability of the results between standard and miniaturized results is possible up to a certain specimen size. In addition, the microstructure and the method of loading also affect the testing results. In tensile tests where uniaxial stress is applied, interchangeability of the results is possible [28,29]. However, in the case of a complex state of stress or even when considering the size of the crack, satisfactory results have not yet been achieved.
In the case of miniaturized FLD specimens, the results showed that the principle of using miniaturized samples is possible. The highest compliance of results can be found between the standard and miniaturized FFLDs, as documented in Figure 9. Other evaluation methods, ISO, time-dependent and section maximum, led to results that are not satisfactorily comparable with those evaluated from the standard geometry of the specimens. The original concept of FLD was created for the deep drawing of materials with significant thinning during the deformation process. However, nowadays, this idea is not applicable for advanced high-strength steel (AHSS) without significant thinning before cracking; therefore, FFLD is more relevant than FLD. According to this observation, miniaturized specimens can be applied in the investigation of material properties. In practice, when the results for standard and miniaturized specimens do not fully correspond, the difference can be covered by a safety coefficient, which is set up in the FEA software. The values obtained experimentally and corrected by the safety coefficient are applicable in the evaluation of the deep drawing process in numerical simulation.
However, it is necessary to realize that a miniaturized FFLD can provide more accurate results when a real part is formed with a punch that creates a comparable degree of deformation and stress in the material.

FLDs and FFLDs were evaluated based on the results of tests performed using miniaturized and standard Nakajima specimens with diameters of 40 and 200 mm, respectively. The investigated material was press-hardened steel 22MnB5, which is commonly used in the automotive industry. In total, four different evaluation methods were used in the study (standard section method, time-dependent method, section maximum method and thinning method), and the resulting FLDs or FFLDs were compared.
It was proven that the miniaturized FFLD can provide more advanced results than the standard FFLD. This can be explained by the bending effect due to the original material thickness and the ratio of the specimen thickness/punch diameter. However, the difference between the individual methods is not obvious in the miniaturized specimens. The resulting FFLDs for standard and miniaturized specimens can be considered as comparable.
Future research will be devoted to the validity and transferability of results from standard and miniaturized specimens made of different materials and thicknesses.

This research was funded by the “Ministry of Education, Youth and Sports (MŠMT)”, student grant competition of University of West Bohemia, grant number” SGS 2019-019—Material-technological research of advanced high strength steels”. The APC was funded by CHF 1800.

M.R., S.R., M.U. and P.K. thank the institutional support of the research organization (Decision no. 3/2018 of the Ministry of Industry and Trade of the Czech Republic). 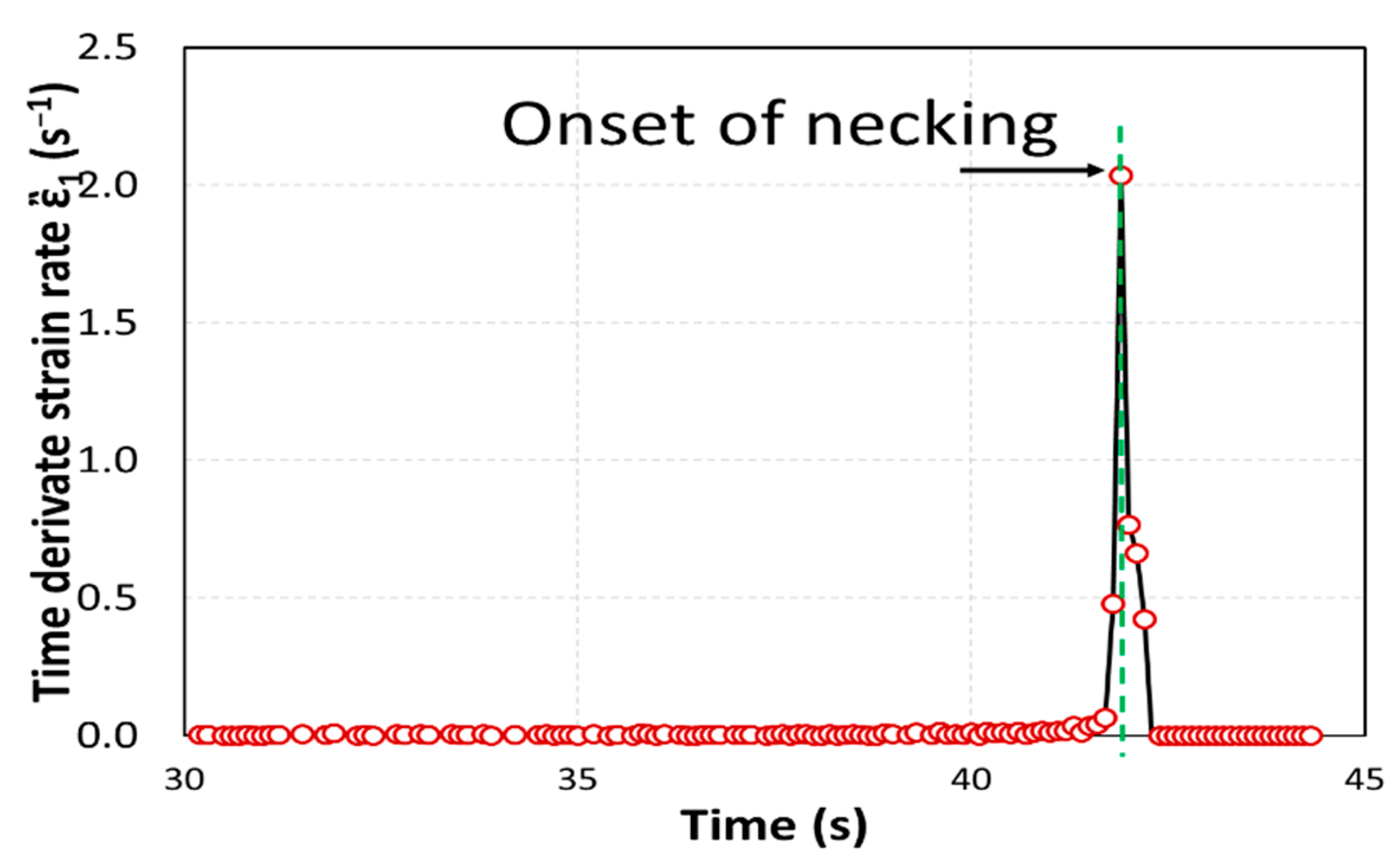 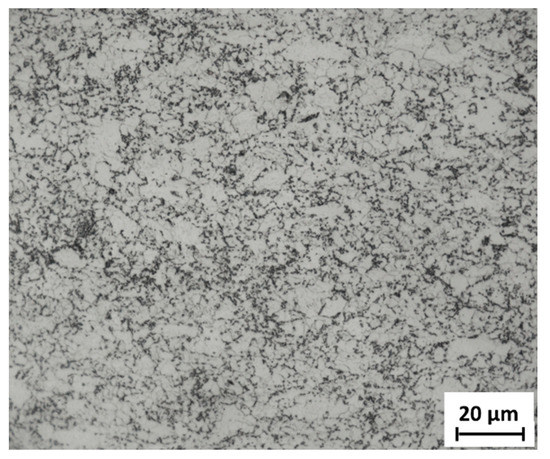 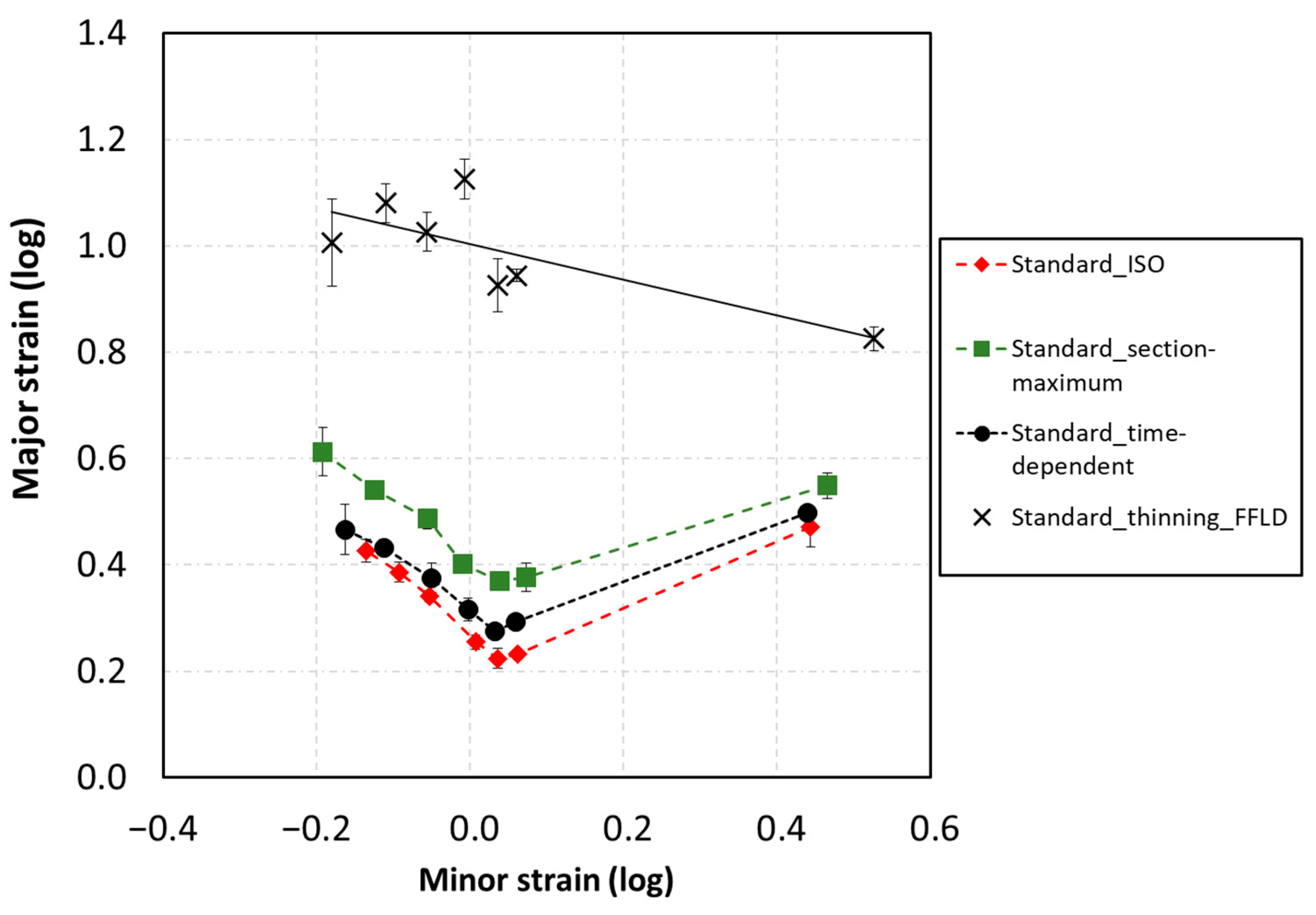 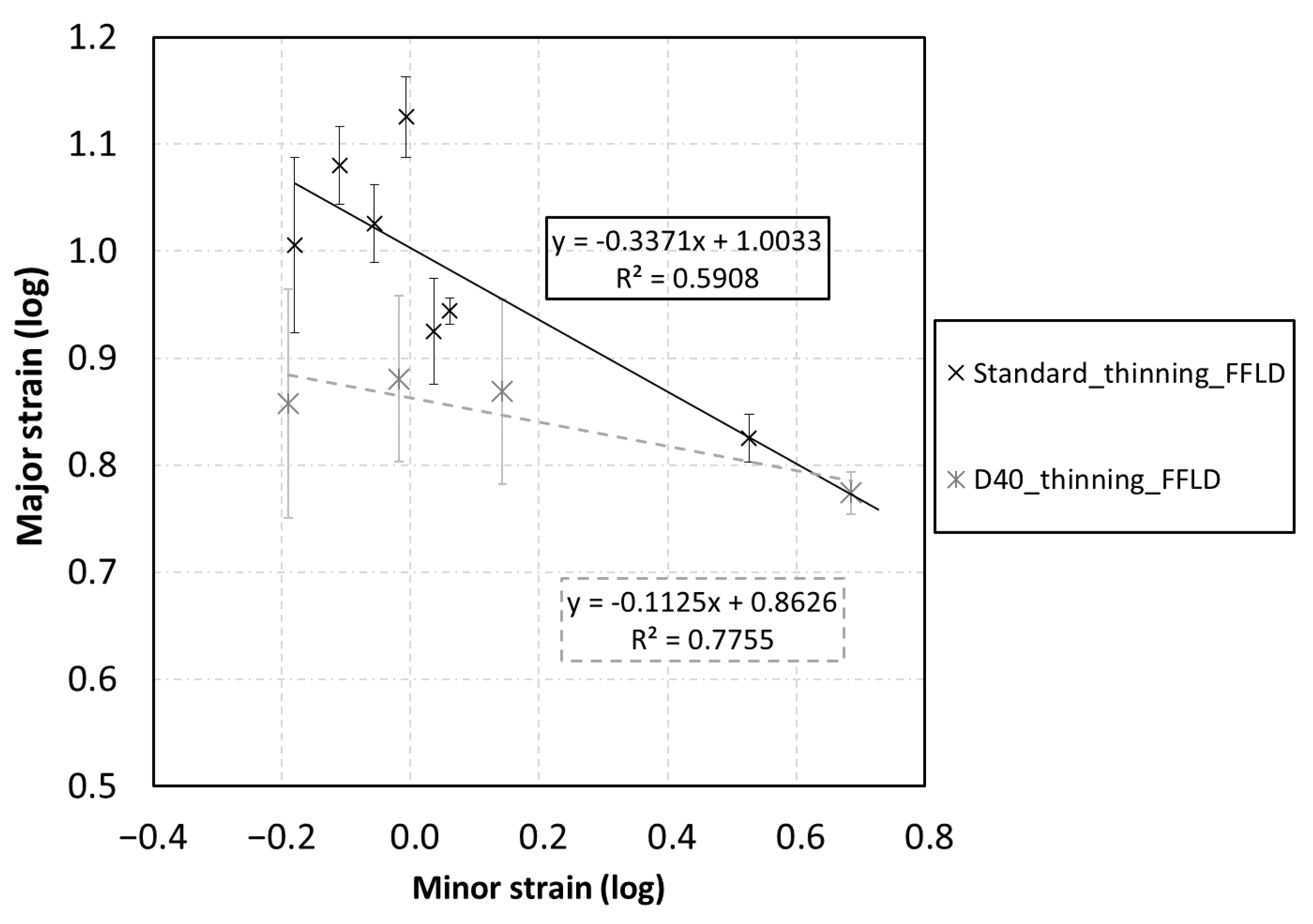