Prediction of Microstructure Constituents’ Hardness after the Isothermal Decomposition of Austenite

:
An increase in technical requirements related to the prediction of mechanical properties of steel engineering components requires a deep understanding of relations which exist between microstructure, chemical composition and mechanical properties. This paper is dedicated to the research of the relation between steel hardness with the microstructure, chemical composition and temperature of isothermal decomposition of austenite. When setting the equations for predicting the hardness of microstructure constituents, it was assumed that: (1) The pearlite hardness depends on the carbon content in a steel and on the undercooling below the critical temperature, (2) the martensite hardness depends primarily on its carbon content, (3) the hardness of bainite can be between that of untempered martensite and pearlite in the same steel. The equations for estimation of microstructure constituents’ hardness after the isothermal decomposition of austenite have been proposed. By the comparison of predicted hardness using a mathematical model with experimental results, it can be concluded that hardness of considered low-alloy steels could be successfully predicted by the proposed model.
Keywords:
low-alloy steel; quenching; austenite decomposition; mechanical properties; hardness

2.1. Methods for Estimation of Hardness of Microstructure Constituents

In this paper, the equations for estimation of microstructure constituents’ hardness after the isothermal decomposition of austenite have been proposed for hypoeutectoid carbon and low-alloy steels. Steels were quenched from austenite range to the temperature of isothermal transformation where all austenite decomposes at constant temperature. Special attention has been given to the modelling of bainite transformation.
To develop equations for prediction of microstructure constituents’ hardness after the isothermal decomposition of austenite, the following well-known general facts were accepted.
The developed model was verified by comparison of predicted hardnesses of microstructural constituents by mathematical modelling with that obtained from TTT diagrams. Predicted hardnesses of ferrite, pearlite, bainite and martensite by mathematical modelling correlate very well to results given by TTT diagrams. The differences between achieved results by mathematical modelling and experimental results were insignificant.
By the comparison of predicted hardness by a mathematical model with experimental results, it can be concluded that hardness of considered steels could be successfully predicted by the proposed model.

This research was funded in part by the University of Rijeka under the project number uniri-tehnic-18-116.

Data is available in the article.

This research has been supported in part by the University of Rijeka under the project number uniri-tehnic-18-116. 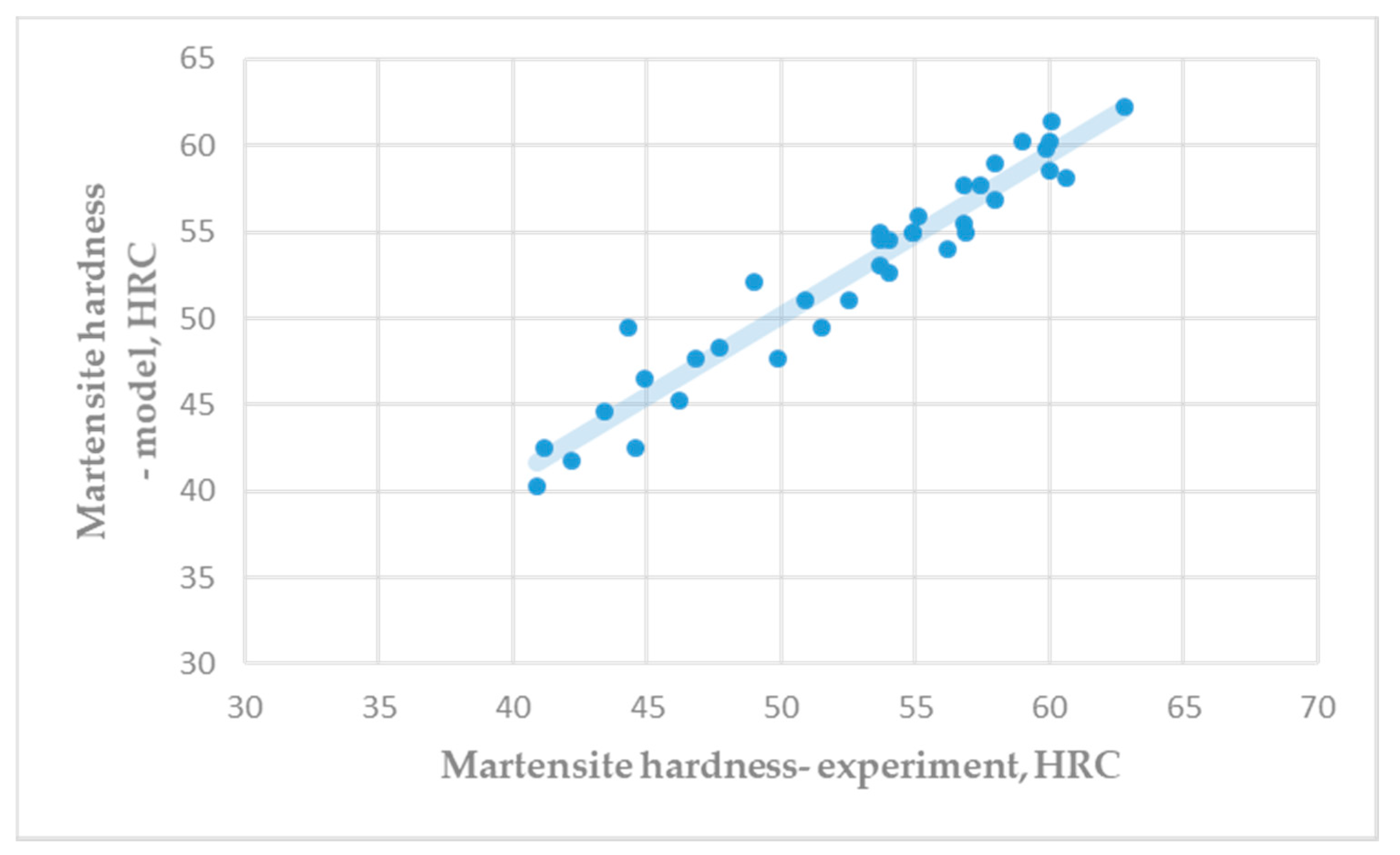