A model-based system for real-time monitoring and operational support has been developed for the Composition Adjustment by Sealed argon-bubbling with Oxygen Blowing (CAS-OB) process. The model of the system is based on a previously developed dynamic model using first principles, i.e., mass and energy balances, reaction kinetics, and thermodynamics. Adaptive estimation of state variables has been implemented using a Kalman filter to ensure that the model is able to correct for deviations between measured and calculated temperatures in real-time operation. The estimation technique reduces the standard deviation of the predicted end temperature from 19.5 °C to 5.5 °C in a data series with more than 1000 heats. The system also includes an endpoint optimisation, which calculates the amount of scrap or oxygen to be added to achieve the target temperature at the end of the heat. The model has been implemented in the Cybernetica® CENIT™ framework. The overall model can be regarded as a hybrid digital twin, where a first principles model is adapted in real time using process measurements. The system also includes user interfaces for operators where process predictions can be followed, and suggested optimised inputs are presented. The system has been deployed at two refining stations at SSAB Europe OY in Raahe, Finland. The optimized suggestions for oxygen and scrap are presented to the operators in the graphical user interface. A projected temperature profile is calculated into the near future using the planned operational procedure as well as the projected temperature profile using optimised inputs. Both profiles are displayed in the user interface. Based on these trajectories, the operator can decide on whether to follow the nominal trajectory, or the recommendation from the optimisation This will help the operators make better decisions, which in turn reduces the number of rejected heats in the CAS-OB process. View Full-Text
Keywords: real-time model; estimation; model predictive control; steel refining real-time model; estimation; model predictive control; steel refining
►▼ Show Figures 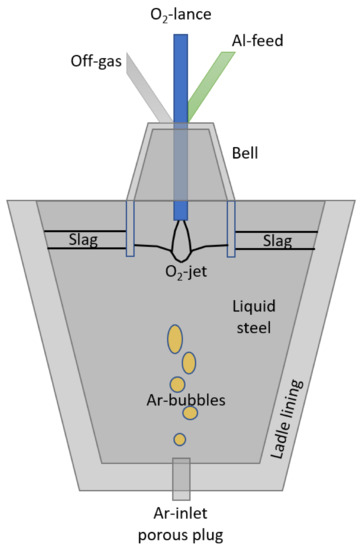