Effect of the Surface Roughness of Tungsten on the Sputtering Yield under Helium Irradiation: A Molecular Dynamics Study

A divertor is an armor component that maintains the integrity of fusion reactors from the irradiation of high-temperature plasma. He ions and neutrons are produced as a result of fusion reactions between deuterium and tritium in ultra-high temperature plasma [1,2]. The irradiation of the He ions and neutrons degrades the properties of materials; therefore, the integrity of the components is damaged [3,4].
Sputtering refers to the phenomenon in which an ion is accelerated and collides with a solid material, causing the atoms that make up the material to bounce outward [5,6]. The sputtering introduces particles into the plasma, which reduces its purity and lowers its temperature; as a result, the high temperature of the plasma can no longer be maintained [3,7]. Therefore, a divertor must be composed of materials which have a low sputtering yield [4,6]. Since the sputtering yield of tungsten is considerably low amongst all high-temperature materials, tungsten has been considered to be a potential material for use in this application [8,9,10,11]. Although tungsten has several disadvantages, efforts have been made to overcome these disadvantages and use it as a divertor material [12,13,14,15].
Although the sputtering yield of tungsten is lower than that of other high-temperature materials, it still needs to be further reduced in order to maintain plasma at a high temperature for a long time. Intensive investigations have been conducted with the aim to lower the sputtering yield of a divertor composed of tungsten [16,17]. In order to manufacture a divertor, tungsten powder is heat-treated at a high temperature under high pressure [18]. Various studies have been conducted to reduce the sputtering yield by controlling the roughness of the tungsten powder [14,15]. In previous experimental studies, the sputtering yield increases as the roughness of the surface increases [15,19,20], and it was hypothesized that the trend was caused by the re-deposition process. Re-deposition refers to a phenomenon in which sputtered tungsten atoms are re-deposited on convex tungsten hills, as shown in Figure 1. In this study, the above hypothesis was examined by molecular dynamics simulations, which have frequently been used to simulate plasma–material interaction [21,22,23].

LAMMPS is an MD package with features that make it easy to configure the desired system. We utilized the interatomic potentials between the W-W, W-He, and He-He atoms studied by N. Juslin et al. [21,24]. According to N. Juslin et al., the interatomic potential of W-He is given as the following equation: [24]
ZBL is the Ziegler–Biersack–Littmark potential [23] and is the Ackland–Thetford tungsten potential [22]. According to N. Juslin et al., if the ZBL potential is reduced by 10 eV, it will be similar to the AT potential in a short range [24]. Therefore, the interatomic potential in a short range is expressed as shown in Equation (1). The interatomic potential of He-He is given as the following equation [21]:
In molecular dynamics simulation, the re-deposition phenomenon was captured by estimating the positions of W atoms over time according to the laws of classical mechanics without any prior assumptions about the re-deposition process.
To compare the roughness effect on the net sputtering yield, we set three geometries, as shown in Figure 2. Geometry 1 is a cuboid shape. Using geometry 1 as a common part, we merged a dome shape with geometries 2 and 3. We cut off some of the spheres with radii nm and nm, respectively, and combined them with geometry 1. Thus, the dome-shape Gaussian curvature of geometry 2 is 0.0111 nm and the dome-shape Gaussian curvature of geometry 3 is 0.0444 nm. The standard for the cutting part of the sphere was cut so that the diameter of the cross-section was 9.4956 nm. Additionally, in order to see the effect of surface roughness alone, the area of the dome that met the cuboid was matched in all of the geometries. For the analysis of the results, we defined the expression “curvature of the dome parts” as COD.
To proceed with the simulations, we assumed the following conditions:
We expected that the energy of the incident particles, the roughness of the divertor surface, and the direction of the incident particles would affect the results. To examine the effect of the incident direction used, we analyzed the effects of five directions. The incident directions of He ions are listed as:
For the analysis of the results, we defined the sputtering yield of tungsten atoms released by irradiation as the primary sputtering yield. Additionally, the sputtering yield when re-deposition is taken into account in the primary sputtering yield was called the net sputtering yield.

This study was supported by a National Research Foundation of Korea (NRF) grant funded by the Korean government (MSIT) (NRF-2019M1A7A1A02085179). This work was also supported by the “Human Resources Program in Energy Technology” of the Korea Institute of Energy Technology Evaluation and Planning (KETEP), granted financial resources from the Ministry of Trade, Industry Energy, Republic of Korea (No. 20214000000070). 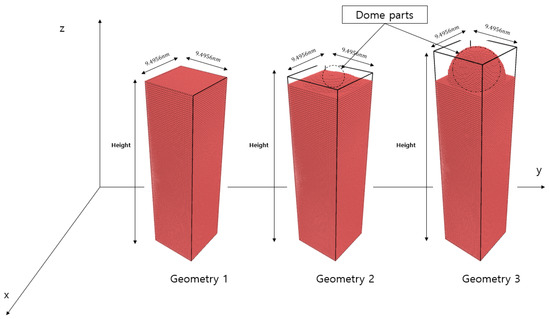 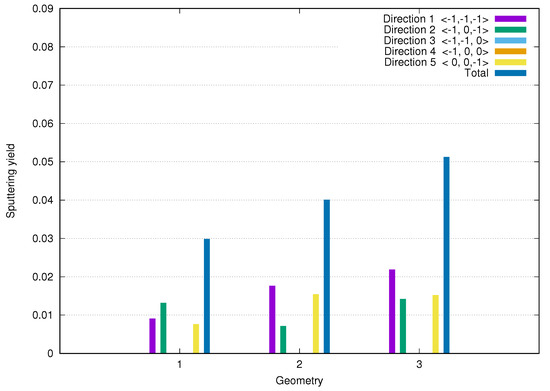 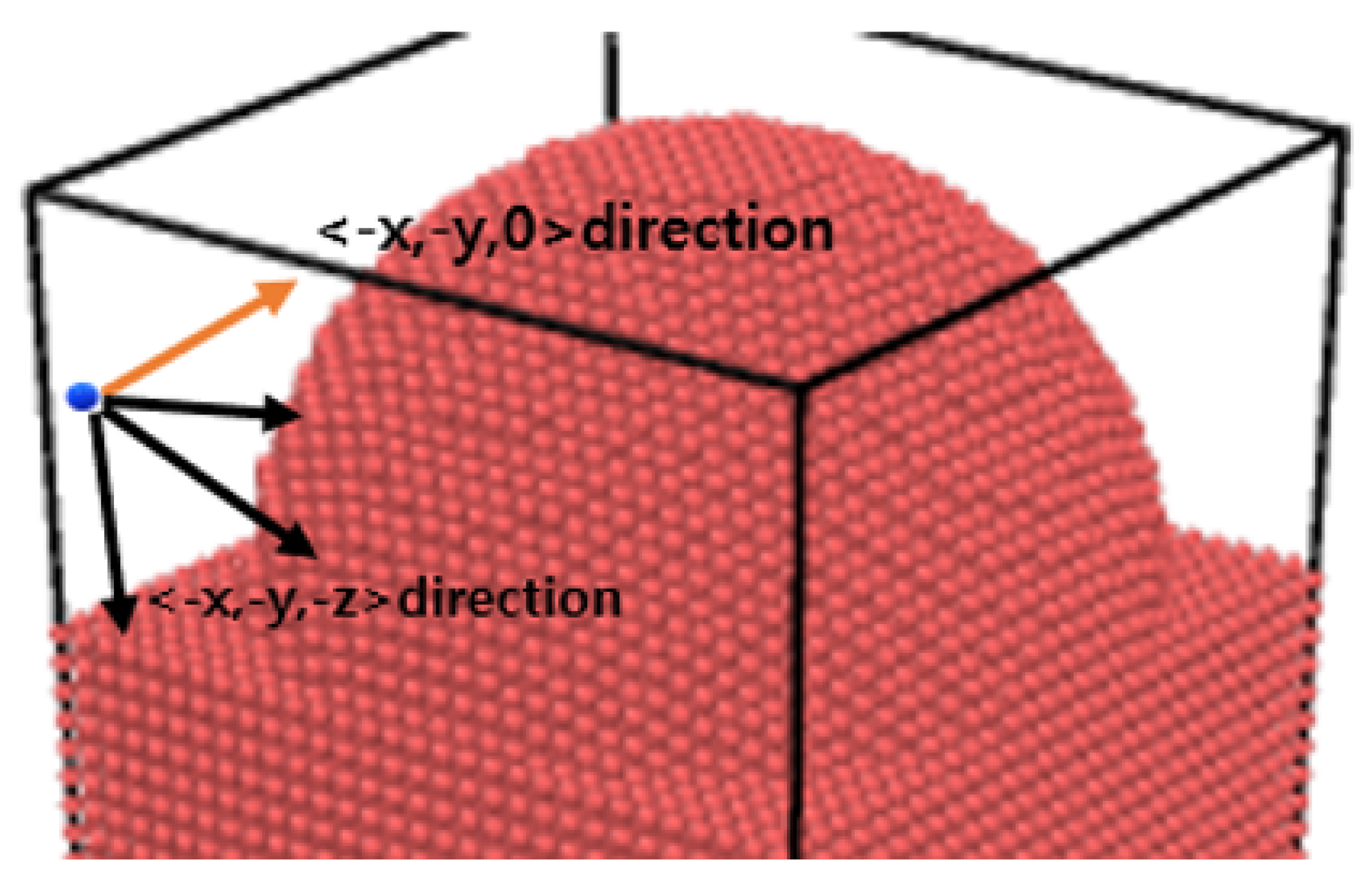 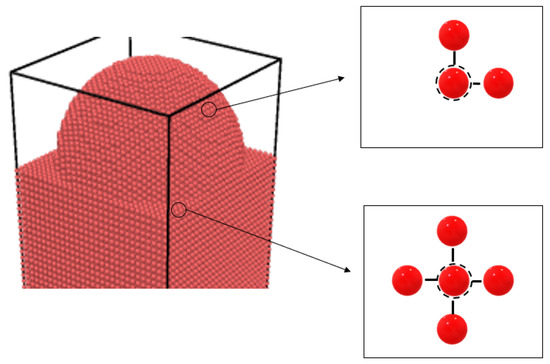 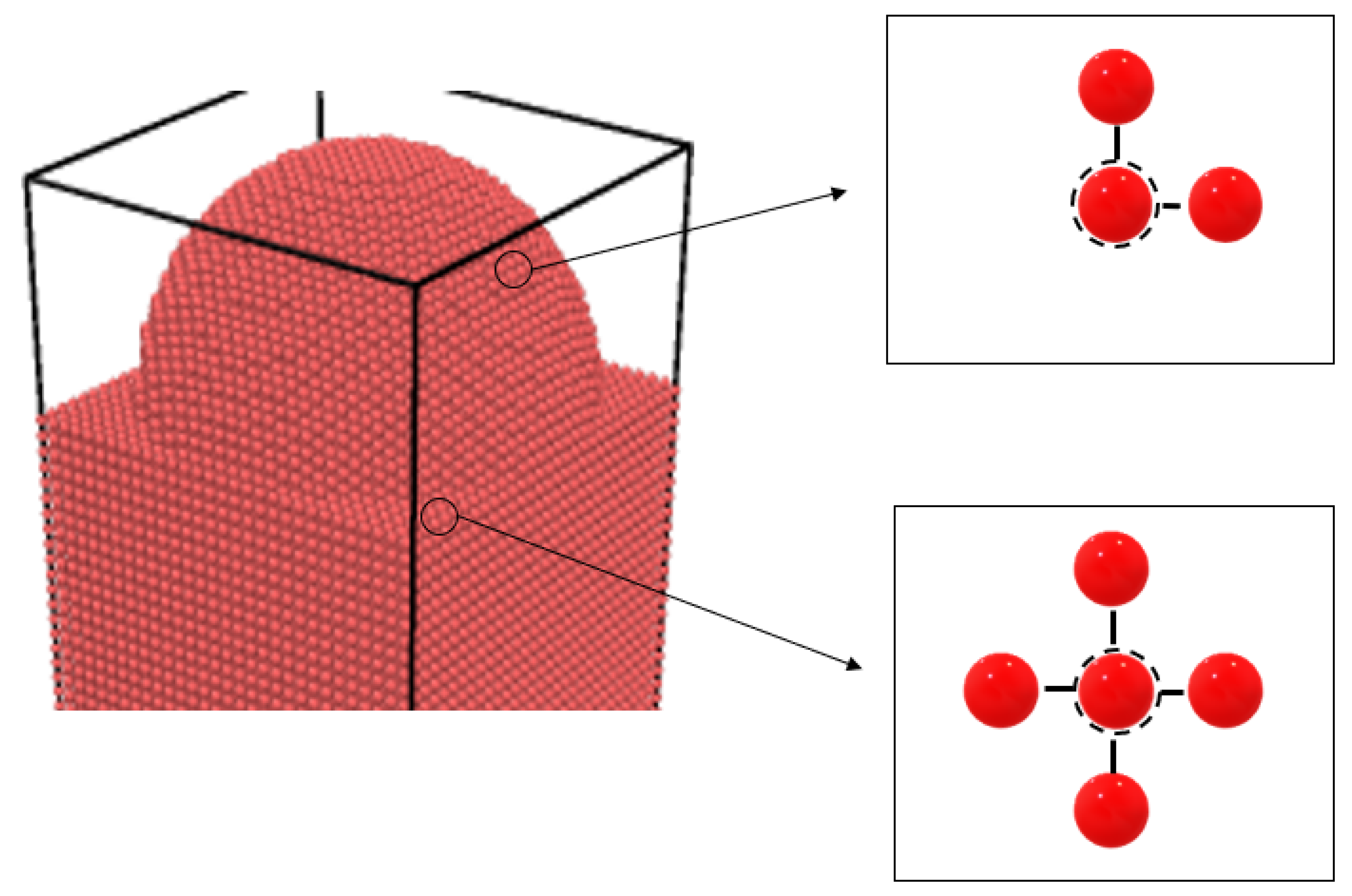 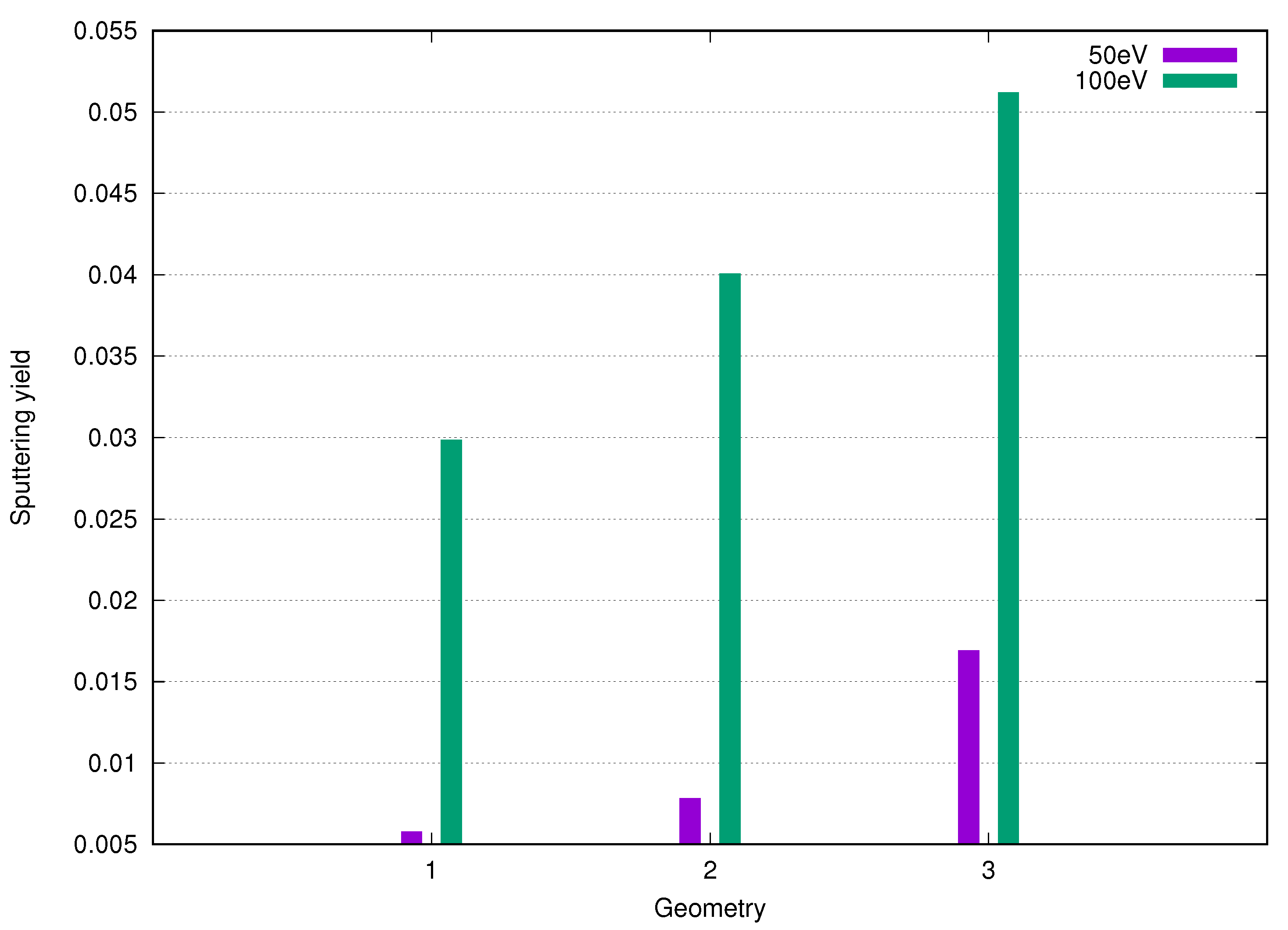