Effect of the Surface Roughness of Tungsten on the Sputtering Yield under Helium Irradiation: A Molecular Dynamics Study
Previous Article in Journal

Understanding the physical vapor deposition (PVD) process of metallic coatings on an inorganic substrate is essential for the packaging and semiconductor industry. In this work, we investigate a Copper (Cu) film deposition on a glassy Calcium Aluminosilicate (CAS) by PVD and its dependence on the incident energy. Molecular dynamics simulation is adopted to mimic the deposition process, and pure Cu film is grown on top of CAS surface forming intermixing region (IR) of Cu oxide. In the initial stage of deposition, incident Cu atoms are diffused into CAS bulk and aggregated at the surface which leads to the formation of IR. When the high incident energy, 2 eV, is applied, 20% more Cu atoms are observed at the interface compared to the low incident energy, 0.2 eV, due to enhanced lateral diffusion. As the Cu film grows, the amorphous thin Cu layer of 1 nm is temporarily formed on top of CAS, and crystallization with face-centered cubic from amorphous structure follows regardless of incident energy, and surface roughness is observed to be low for high incident energy cases. Deformation and failure behavior of Cu-CAS bilayer by pulling is investigated by steered molecular dynamics technique. The adhesive failure mode is observed, which implies the bilayer experiences a failure at the interface, and a 7% higher adhesion force is predicted for the high incident energy case. To find an origin of adhesion enhancement, the distribution of Cu atoms on the fractured CAS surface is analyzed, and it turns out that 6.3% more Cu atoms remain on the surface, which can be regarded as a source for the high adhesion force. Our findings hopefully give the insight to understand deposition and failure mechanisms between heterogeneous materials and are also helping to further improve Cu adhesion in sputter experiments. View Full-Text
Keywords: Cu film; aluminosilicate glass; sputter; molecular dynamics; metal-inorganic interface; pulling force; adhesive failure Cu film; aluminosilicate glass; sputter; molecular dynamics; metal-inorganic interface; pulling force; adhesive failure
►▼ Show Figures 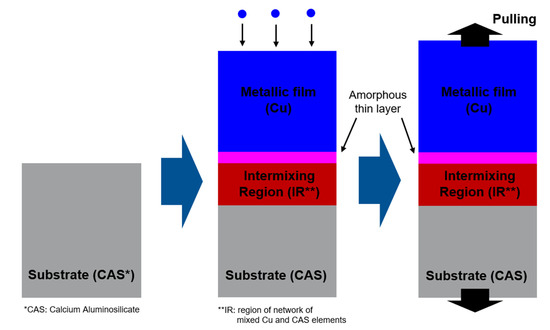