:
Inclusions in steels and alloys are known to lower the resistance to deformation, as well as to lower the mechanical, corrosion and other properties. Studies of inclusions in nickel-based alloys are important since these materials could suffer from corrosion degradation in harsh operational conditions. This, in fact, could lead to a pitting initiation around the inclusions. Two industrial Ni-based alloys (alloy 718 and EP718) were investigated to determine the harmful effects of different inclusions on the corrosion resistance of Ni-based alloys. Specifically, the inclusion characteristics (such as composition, morphology, size, number and location) were determined for inclusions collected on film filters after electrolytic extraction and dissolution of a metal matrix around different inclusions on surfaces of metal samples after electrolytic extraction (EE). It was found that both Ni-based alloys contain various inclusion types: carbides (large size NbTi-C and small multicomponent carbides), nitrides TiNb-N and sulphides (TiNb-S in EP718 alloy). The most harmful effects on the corrosion resistance of metal were detected around sulphides and small carbides containing Mo, W, Cr. Dissolution effects were also observed around large carbides and nitrides, especially around inclusions larger than 10 µm. Moreover, the dissolution of a matrix around inclusions and clusters located on the grain boundaries were found to be 2.1–2.7 times larger compared to inclusions found inside of grains of the given alloy samples.
Keywords:
nickel-based alloys; corrosion; inclusions; oil and gas industry; electrolytic extraction; alloy 718

Many investigations show that inclusions (incoherent precipitates), which are formed during production [1,2,3], can significantly affect mechanical, corrosion, deformation, machining properties of steels and alloys. This has, for example, been reported with respect to low alloyed steels and carbon steels [4,5,6], stainless steels [7,8,9,10], and other alloys [11,12,13].
Voids and stressed zones between the inclusion and a matrix represents sites where microcracks and pittings are initiated. Also, around inclusion zones are formed zone which contain no or lower concentrations of precipitated phases and elements contained in inclusions or metal zones depleted in alloying elements. As a result, the metal zones adjacent to inclusions are characterized by higher levels of defects and stresses [1]. Therefore, the mechanical properties and corrosion resistance of steels and alloys depend on the amount of these harmful inclusions, as well as on their size, morphology and distribution.
Ni-based alloys have a high corrosion resistance and good mechanical properties. Thus, they are widely used in industrial applications as a material for wellhead components and downhole equipment for corrosive service at high temperatures and pressures in the presence of aggressive components (such as H2S, CO2, chlorides) [14]. Since Ni-based alloys have complicated chemical compositions, it leads to a formation of various deleterious inclusions and phases such as carbides, sulphides, delta-phase, etc. [15]. Some inclusions can initiate a pitting corrosion and could lead to environmentally assisted cracking, corrosion fatigue and hydrogen embrittlement. Therefore, studies of corrosion and mechanical properties of Ni-based alloys and their dependence on different inclusion types has been the object of attention of many previous studies [16,17,18,19,20].
For instance, it was reported in [21,22] that stable pittings started at Nb-C rich particles, whereas nitrides of Ti and Nb have a lower effect on corrosion [23]. Precipitation of carbides containing chromium and tungsten (such as M23C6, M6C) on the grain boundaries is also possible precursor sites for pitting in Ni-base alloys [24,25]. Mo-rich phases are also known to lead to sensitization and poor corrosion properties on the grain boundaries [26]. In [27] it was shown, that a delta phase has a detrimental effect on the passivation and potential breakdown of alloys. Moreover, the delta phase is also a trapping site for hydrogen, which lowers the resistance to hydrogen embrittlement and which is dependent on the morphology of second phase particles [28,29]. Despite high crystallization rate additive technologies result in specific inclusions, such as coarse carbides of Ti, Nb, Cr, Mo, Nb/Mo-rich particles [30,31].
Overall, it is clear that the Ni-based alloys contain various inclusion types. However, at the moment there are unclear and contradictory data on the influence of composition, size, location and morphology of different inclusions on the corrosion properties. Therefore, the main goals of the present study are to test an application of the electrolytic extraction technique for precise three-dimensional investigations of different inclusions and clusters (their composition, morphology, size, number and location in the matrix) in present two industrial Ni-based 718 and EP718 alloys. Furthermore, to evaluate the effect of various inclusions and clusters on the corrosion resistance of these alloys by investigations of the dissolved matrix around typical by using the electrolytic extraction process.

In order to investigate the effect of inclusions on corrosion properties, two commercially available nickel-based alloys were selected. The materials were produced by vacuum induction melting and vacuum remelting processes and then forged and heat treated (solution annealing than stepped ageing) according to corresponding specifications that are described in detail in [24]. The chemical compositions of the studied materials are given in Table 1.
The method of electrolytic extraction (EE) was used for 3D investigations of inclusions. The extraction was done using a 10% AA electrolyte (10% acetylacetone–1% tetramethyl-ammonium chloride-methanol) and using the following parameters: 0.04–0.06 A an electric current and 2.9–3.8 V a voltage. The temperature of electrolyte during extraction was ambient.
According to previous studies [32], this electrolyte was selected because it does not dissolve the detected inclusions, but it dissolves the matrix. Therefore, it can be assumed that the inclusions were not directly involved in the electrochemical dissolution of the matrix around the inclusion. During a typical 150–180 min of extraction approximately 0.08–0.10 g of alloy samples were dissolved during each electrolytic extraction, which correspond to a dissolved metal layer of 70–95 µm. After dissolution, a filtration of the solution was made where the inclusions were collected on a surface of the polycarbonate film filter, having a hole diameter of 0.4 µm. Each test was duplicated.
Characteristics of non-metallic inclusions (such as composition, morphology, size, number and location) were analyzed by means of scanning electron microscopy (SEM) (Hitachi, Tokio, Japan) equipped with energy dispersive spectroscopy (EDS). The inclusions were investigated on the surface of film filters (FF) as well on the surface of metal samples (MS) that had been subjected to dissolution. Some SEM images of typical inclusions investigated on a film filter and metal surface after EE are shown in Figure 1.
For the evaluation of the effect of inclusions on the corrosion resistance of alloy, a dissolution extent of the matrix around different inclusions after electrolytic extraction was determined by measuring the diameters of the crater (Dcr) around inclusions and by calculating the relative coefficient of metal dissolution (KD), using the following relationships:
KD = Acr/Aincl
where Acr and Aincl are the area of the crater around an inclusion and the area of this inclusion measured on a SEM image, respectively.

3.1. Characterization of Inclusions after Electrolytic Extraction of Metal Samples

Based on the 3D investigations of inclusions on film filters and on surfaces of metal samples after electrolytic extractions, it was found that the total number of inclusions per unit volume in an EP718 is about 6.5 times larger than that in a 718 alloy. However, in most cases, a determination of only the total content of all inclusions cannot explain the difference in corrosion resistance of similar steels or alloys. It is well known that different inclusions (having various characteristics such as compositions, morphology, size and location in the matrix) could lower the corrosion properties of steels and alloys. Therefore, this study was focused on the estimation of the effect of these characteristics of different types of inclusions on the dissolution extent of the matrix around these inclusions during electrolytic extraction. This behavior is believed to be similar to the corrosion processes that occur in the most prominent industrial environments, including oil and gas wells.
The different inclusions observed in 3D on the film filter and on the metal surface after electrolytic extraction of the EP718 sample were divided into four groups, based on their composition and morphology.
Table 2 shows typical SEM images, contents of the main elements and size ranges of different types of inclusions. Since the contents of such light elements as C, N and O cannot be accurately determined by EDS, their contents have not been determined.
It was found that the sample of EP718 alloy contains the following typical inclusion types:
It should be noted that the NbTi-C and TiNb-N inclusions observed on the film filter and on the metal surface after electrolytic extraction were found to be separate particles as well as clusters or groups of particles located very close to each other, which summarized size is significantly larger than that of separate particles. Moreover, sometimes the inclusions of different types were observed together in one group or located close to each other.
Based on the composition and morphology, the inclusions observed in alloy 718 were divided into the three groups (as shown in Table 3).
It was found that the sample of alloy 718 contains the following typical inclusions:

3.2. Effect of Inclusions on Corrosion Resistance

In this study, the characteristics of different inclusions (such as composition, morphology, size, number and location) and dissolution of the matrix around these inclusions were investigated on film filters and on the surfaces of metal samples after electrolytic extraction (EE) of two industrial Ni-based alloys (alloy 718 and EP718). The obtained results can be summarized as follows:

Conceptualization, methodology, investigation, draft writing—A.K., E.A.; resources, validation, supervision, review and editing—P.G.J., A.A.; All authors have read and agreed to the published version of the manuscript. 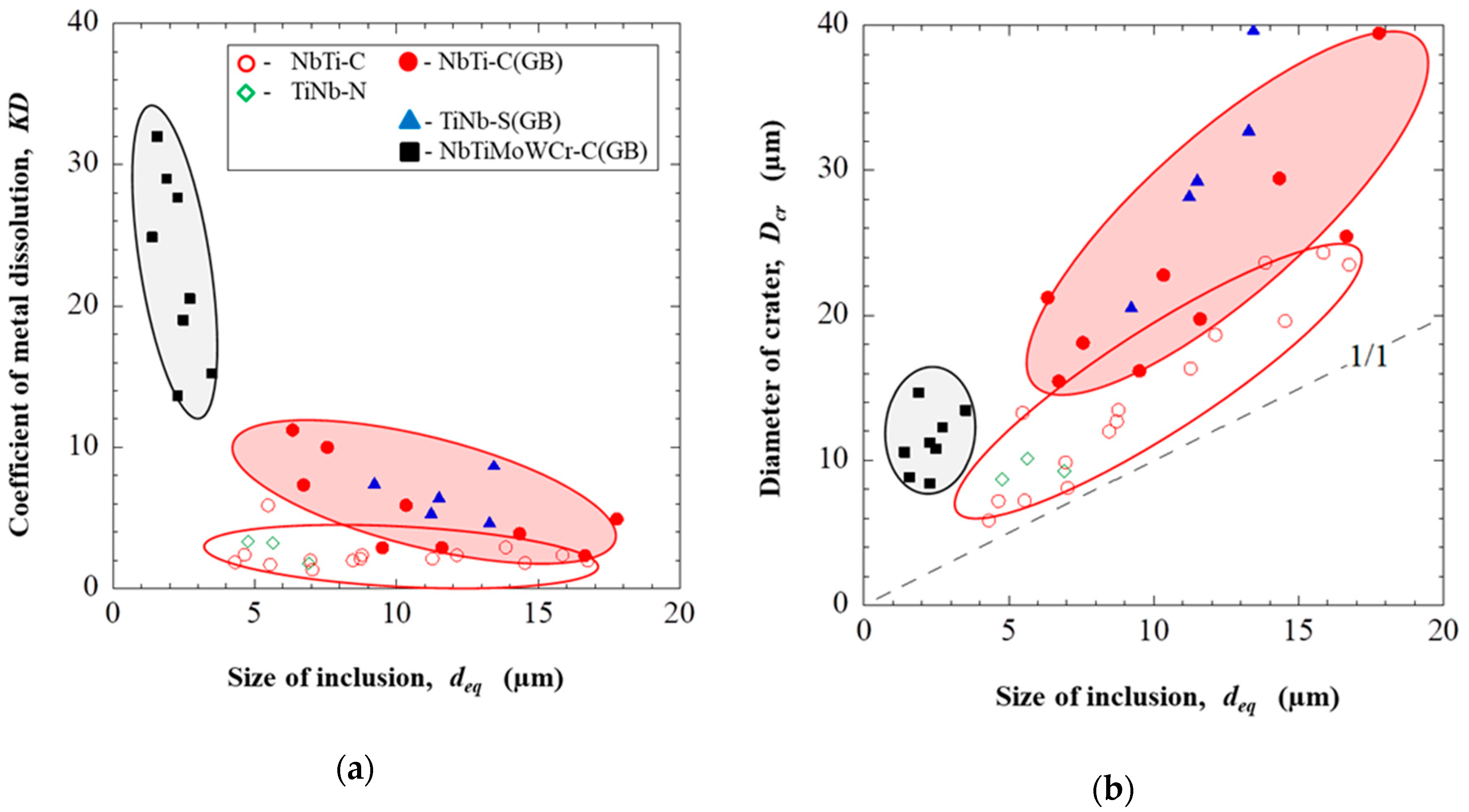