Circumferential Material Flow in the Hydroforming of Overlapping Blanks

In the past decades, the demand for lightweight structures and components has been increasing with the rapid development of the automotive industry [1]. A variety of tubular components, i.e., exhaust pipes, chassis systems and structural components are designed and assembled in automobiles. The manufacturing processes of these components should be straightforward, efficient and reliable [2]. Tube hydroforming has proved itself as an advanced metal forming process to manufacture these components because of its part consolidation, weight reduction and lower costs [3,4]. Variable-diameter components, as a kind of typical hydroformed parts, are widely used in the exhaust pipes of automotives. The diameter of the middle region of the variable-diameter tubular part is much larger than the end [5].
With regard to the tube hydroforming process of variable-diameter tubular components, there are certain limitations on the degree of deformation owing to the hydroformability of the material used [6]. Up to now, a number of studies on the hydroformability of tubular components have been reported [7]. A high strain hardening exponent and a high plastic anisotropy of the material were effective to improve the wall thickness [8,9]. Lubrication conditions had a significant effect on defects of hydroformed parts, such as wrinkling, buckling and cracking [10,11]. The thickness distribution was relatively uniform due to the low friction coefficient when an appropriate lubricant was used [12]. The loading path (the relationship of the internal pressure and the axial feeding) had a significant effect on the formability for a certain material [13]. On the basis of it, the useful wrinkles have been proposed and applied to enlarge the process window [14]. It has been demonstrated that useful wrinkles can improve the forming limit and thickness distribution by increasing axial feeding [15,16]. Wrinkling defects, however, may occur easily due to the axial feeding if the diameter-to-thickness ratio (D/t) of the part is extremely large [17]. It is not feasible to enhance the forming limit by increasing the axial feeding in this situation.
Therefore, a novel approach was proposed, in which overlapping tubular blanks were used instead of closed cross-section tubes [18]. A sound spherical part with an expansion of 60.0% was obtained by using this approach, whereas the maximum expansion was only 46.1% using tubes with closed cross-sections. The key to the enhancement of forming limits was the material flow along the circumferential direction. However, the material flowed along both axial and circumferential directions simultaneously due to the free ends of the overlapping blank. In order to study the material flow along the circumferential direction, the influence of the axial direction should be avoided during the hydroforming of overlapping blanks.
In this paper, the circumferential material flow was investigated using overlapping blanks with axial constraints in the hydroforming of a variable-diameter part [19]. The shape of the variable-diameter part was cylindrical to guarantee that the expansion rates were equal at the bulging area. AISI 304 stainless steel blanks were selected for numerical simulation and experimental research. The circumferential material flow distribution was reflected in the profile of the blank edge. The effect of the overlap angle on the variation of the overlap and thickness distribution was studied.

The sample was a variable-diameter part, as shown in Figure 1. The maximum diameter was 100 mm at the middle region and the diameter was 76 mm at each end. The diameter of the middle region was 31.6% larger than the end. The length of the middle region was 56 mm. The angle of the transition area was 20°. The radius of the fillet was 15 mm in the transitional area.
Overlapping tubular blanks were obtained from sheet blanks after bending and used for the hydroforming of the variable-diameter part. In comparison with the closed cross-sectional tube which was shown in Figure 2a, the cross-section of the overlapping blank was open. The overlap consisted of the inner and the outer layers, as shown in Figure 2b.
Figure 3a shows the shape and dimension of the overlapping blank. The outer diameter and the length of the tubular blank were 76 and 250 mm, respectively. The level of the overlap was determined by the initial overlap angle α that was defined as the angle between the edges of the inner layer and the outer layer.
An elastic body was used for the expansion of the overlapping blank. The function of the elastic body was achieved by rubber capsules that were available on the market. The diameter of the rubber capsule ranged from 50 to 72 mm. The total length of the rubber was 150 mm and the length of the bulging area of the rubber was 128 mm, as shown in Figure 3b. The maximum elastic elongation of the rubber was 100% at least, which was much higher than the expansion rate of the blank. Therefore, the rubber capsule was capable of the hydroforming of the variable-diameter part. There was an entrance for the liquid medium at the right of the elastic body. At the left, the gaskets and the nut could seal the left end of the rubber capsule.
AISI 304 stainless steel blanks were used in the simulation and experimental research. The initial wall thickness of the blank was 0.5 mm. The uniaxial tensile tests were conducted on an AGX-plus 20KN/5KN (SHIMADZU Corp., Kyoto, Japan) machine along the rolling direction of the sheet blanks. Common tensile properties like yield and ultimate tensile strength were obtained from the true stress-strain curve, as shown in Figure 4. The mechanical properties are given in Table 1.

The experiments were conducted on the 10 MN hydroforming machine. Figure 5 shows the schematic diagram of the experimental setup for the hydroforming of the variable-diameter part. The hydroforming tools mainly consisted of a lower die, an upper die, two blocks and a self-sealing elastic body.
The liquid medium flowed into the rubber capsule cavity via the right entrance of the elastic body during the hydroforming process. The two blocks were placed against the ends of the elastic body to prevent it from extending along the axial direction, as shown in Figure 6. The pressurized liquid was stored in the expansive elastic body which pushed the overlapping blank to bulge as the internal pressure increased. When the process finished, the internal pressure was unloaded and the capsule could be taken out from the blank due to its high elasticity property.

The numerical simulation was conducted with FEM software Abaqus 6.13. (SIMULIA Corp., Providence, RI, USA) Figure 7 shows the finite element model used for the hydroforming of a variable-diameter part with overlapping tubular blanks. The die and the blocks were defined as a rigid body. The overlapping blank was defined as a deformed body using the elastoplastic model. The elastic body was defined as a hyperelastic model and its original shape was simplified into a cylinder in the finite element model. The influence of the elastic body shape was limited to the simulation results due to the high elasticity.
As for an isotropic and incompressible material, the strain–energy function W can be described as a function of principal elongations [20]:
In the Mooney–Rivlin model, W is described as a function of strain invariants (I1, I2, I3) [21]. The relationship between the principal elongations and strain invariants can be written as:
In addition, W only depends on the first two invariants I1 and I2 because the third invariant I3 is constant which equals one for incompressible materials [22]. When the level of deformation of an elastic body is relatively low, it is reasonable to apply the original first-order Mooney–Rivlin model, which is expressed as: where C10 and C01 represent the material constant of the deviatoric component. In this research, the two coefficients were set at 0.4920 and 0.1752 MPa according to the tensile test result of the rubber material used.
All the meshes of the body were shell elements. The element size of the blank and the elastic body was set at 2.0 mm. The total numbers of elements of the two deformed bodies were 18,960 and 11,280. The friction coefficients were selected as 0.10, 0.10 and 0.18 at the die-blank, blank-blank and elastic body-blank interface, respectively.

3.2. Material Flow Along the Circumferential Direction

4.2. Variation of the Overlap Angle

4.3. Effect of the Overlap Angle on the Thickness Distribution

In this paper, the circumferential material flow was investigated using overlapping blanks with axial constraints in the hydroforming of a variable-diameter part. A self-sealing elastic deformation body was used as a loading tool to store the pressurized liquid. Numerical simulation and experimental methods were used to investigate the deformation features. The detailed results were as follows:

(1)
The effect of boundary conditions: free ends, tied ends and axial constraint ends, on wrinkling defects at the overlap was studied. Wrinkling defects can be weakened when the blank with axial constraint ends was used.
(2)
Wrinkling defects occurred at the edge of the overlap owing to the compressive axial stress. Furthermore, a bending deformation was observed through the stress analysis.
(3)
The deformation of the blank at the overlap initiated at a low pressure that was nearly half of the yield pressure for tube bugling. The contact sequence to the die cavity of the blank was the overlap at first, then the inner layer of overlap, and the opposite side to the overlap at last.
(4)
The circumferential material flow was obtained when axial constraints were applied to avoid the influence of the axial material flow. The profile was concave at the edge of the overlap due to the circumferential material flow. The peak value is located at the middle cross-section.
(5)
The variation of the overlap angle increased with the initial overlap angle increasing but the improvement of the thickness distribution did not. An optimal thickness distribution was obtained when the initial angle was 120° for the hydroforming of the variable-diameter part with an expansion of 31.6%.

C.H. conceived the experiments and provided all sorts of support during the work; H.F. performed the experiment and wrote the paper. All authors have read and agreed to the published version of the manuscript.

This work was financially supported by the two National Natural Science Foundations of China (project numbers: 51775136 and U1937205). The authors would like to take this opportunity to express their sincere appreciation.

The presentation about this paper was given at the 9th International Conference on tube hydroforming and the paper was recommended to submit to the journal “metals”. 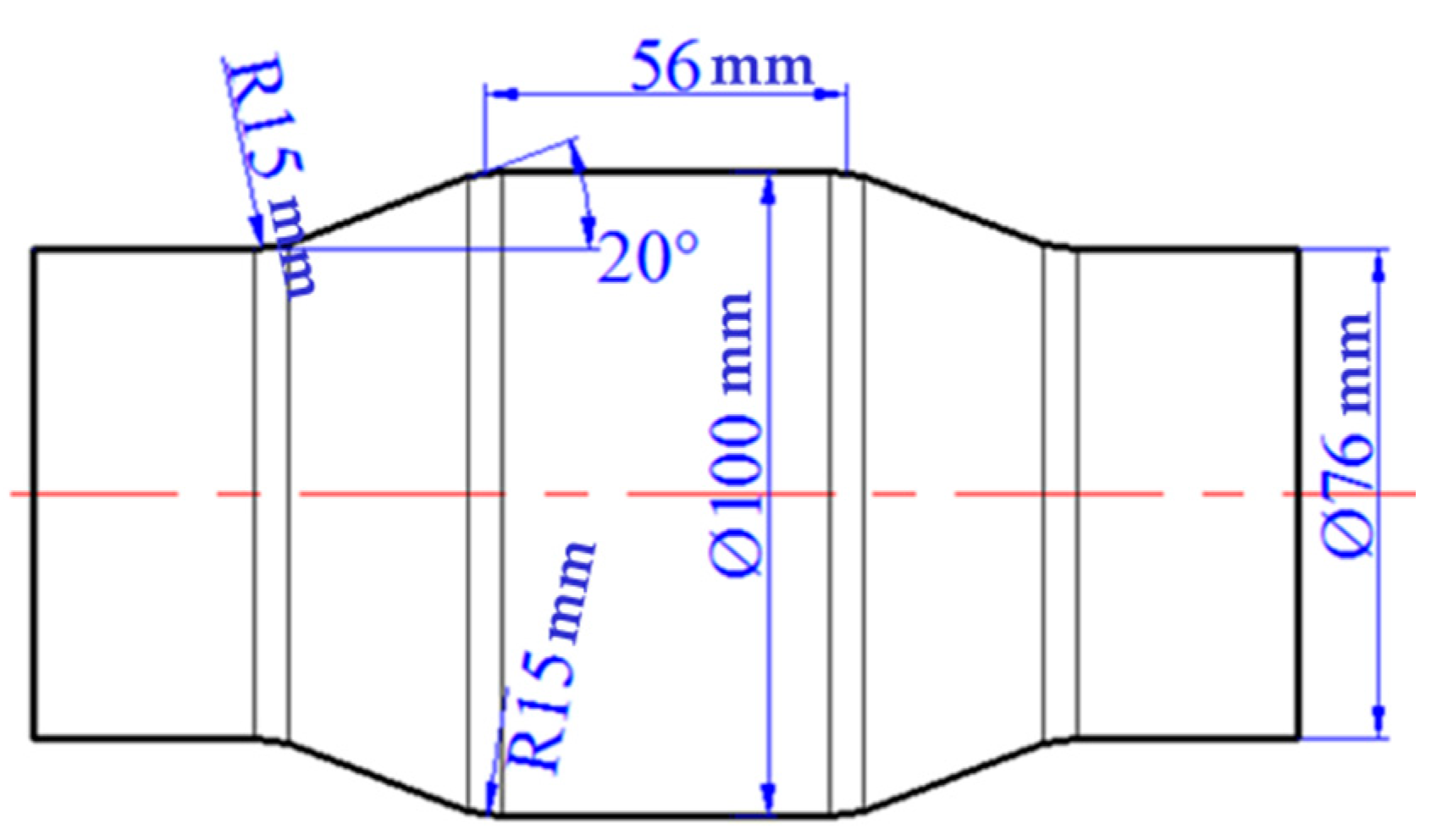 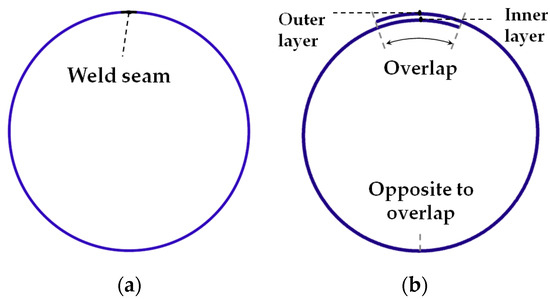 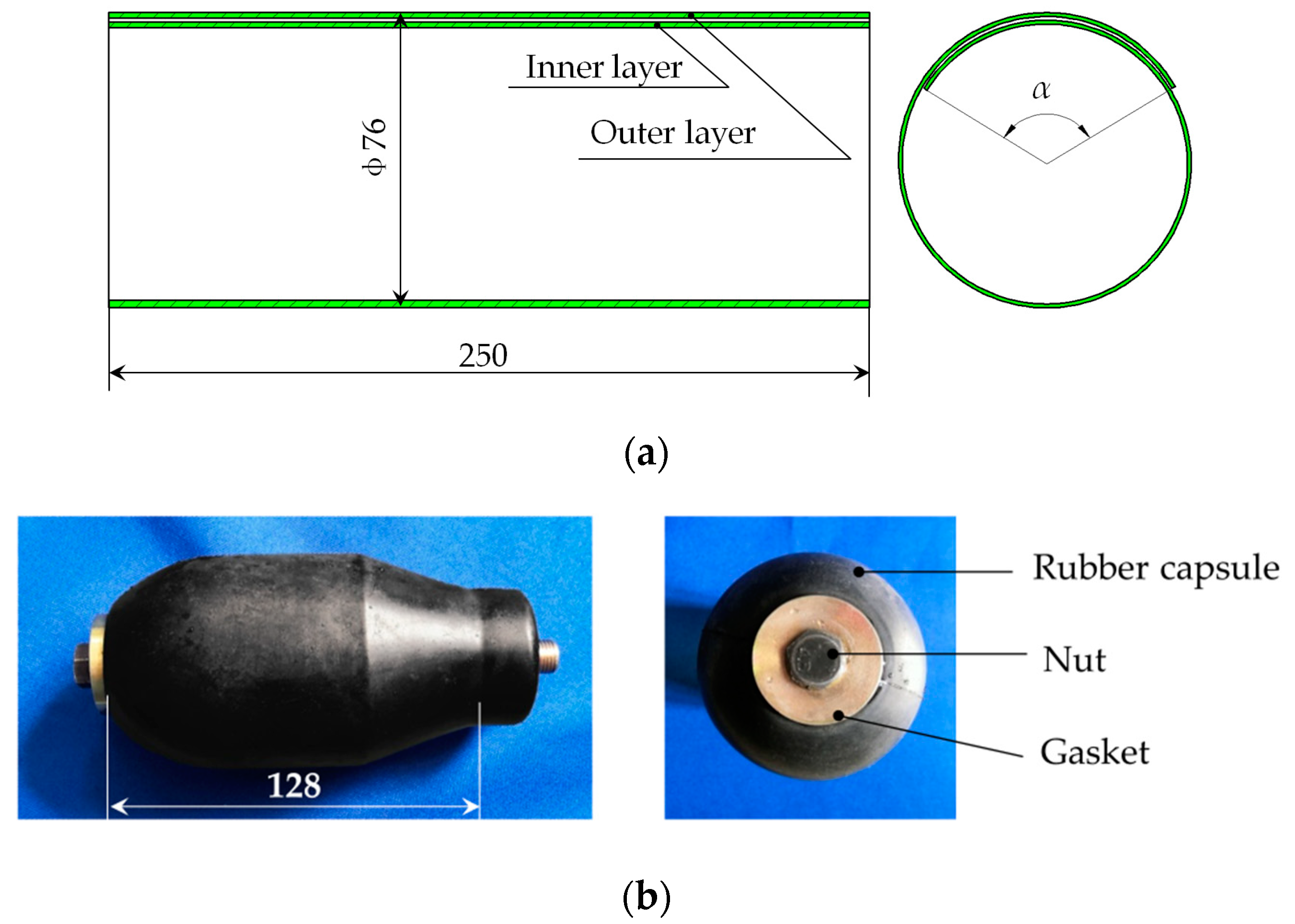 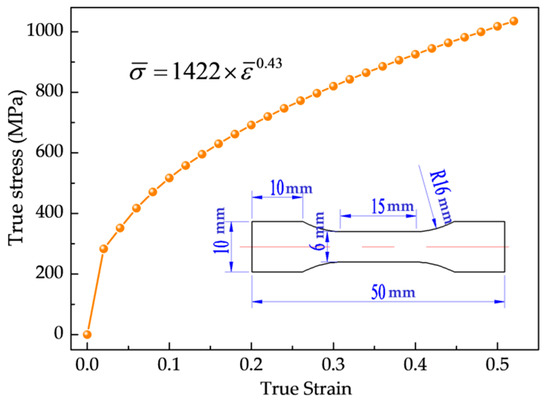 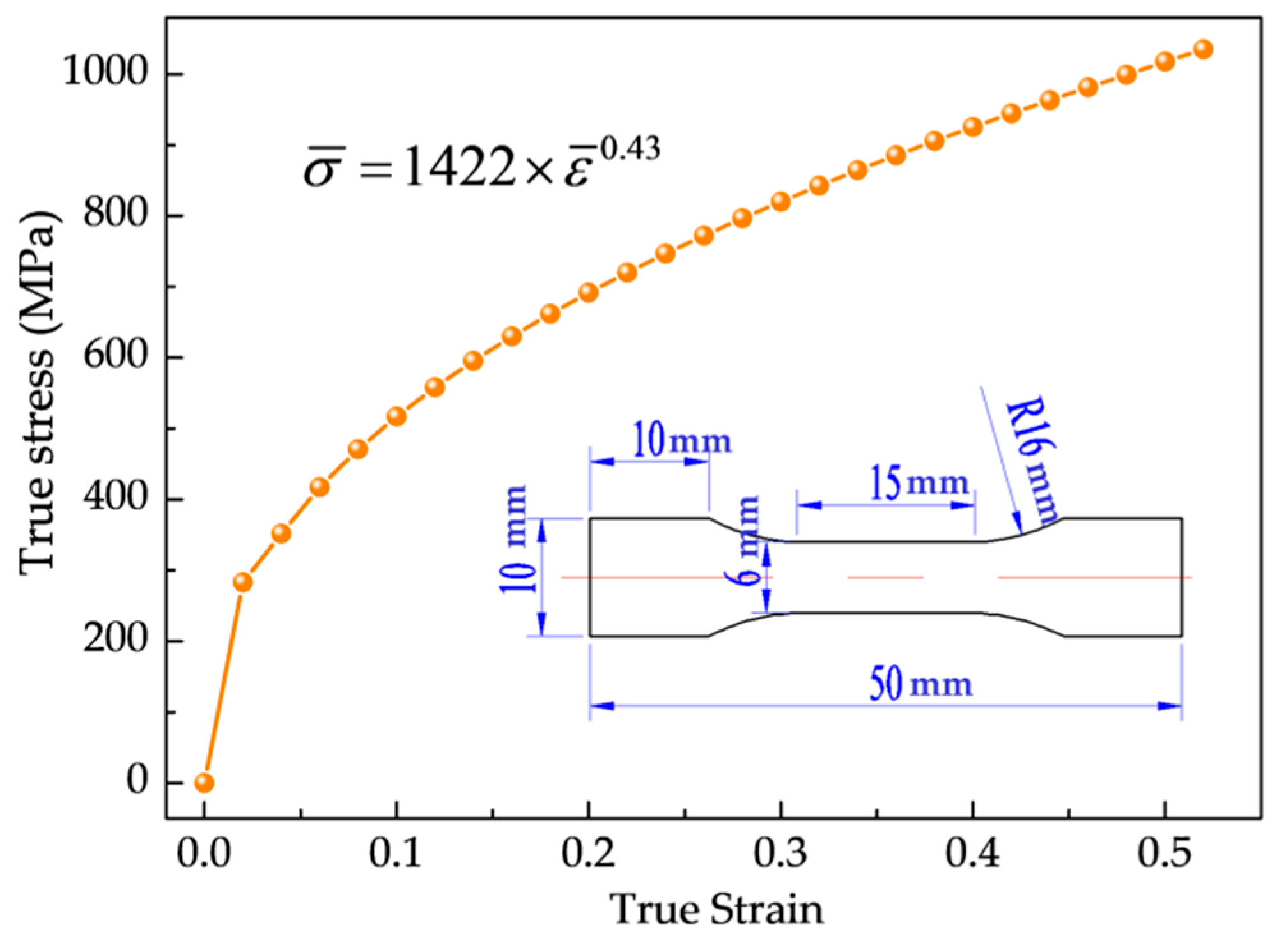 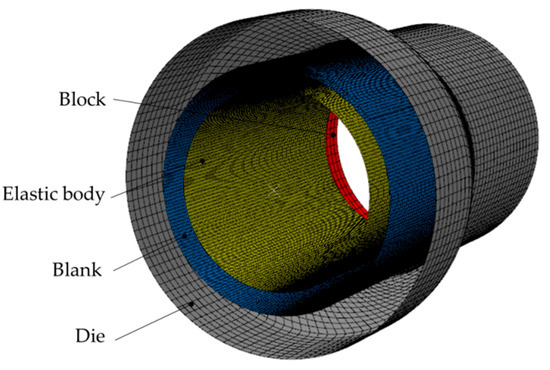 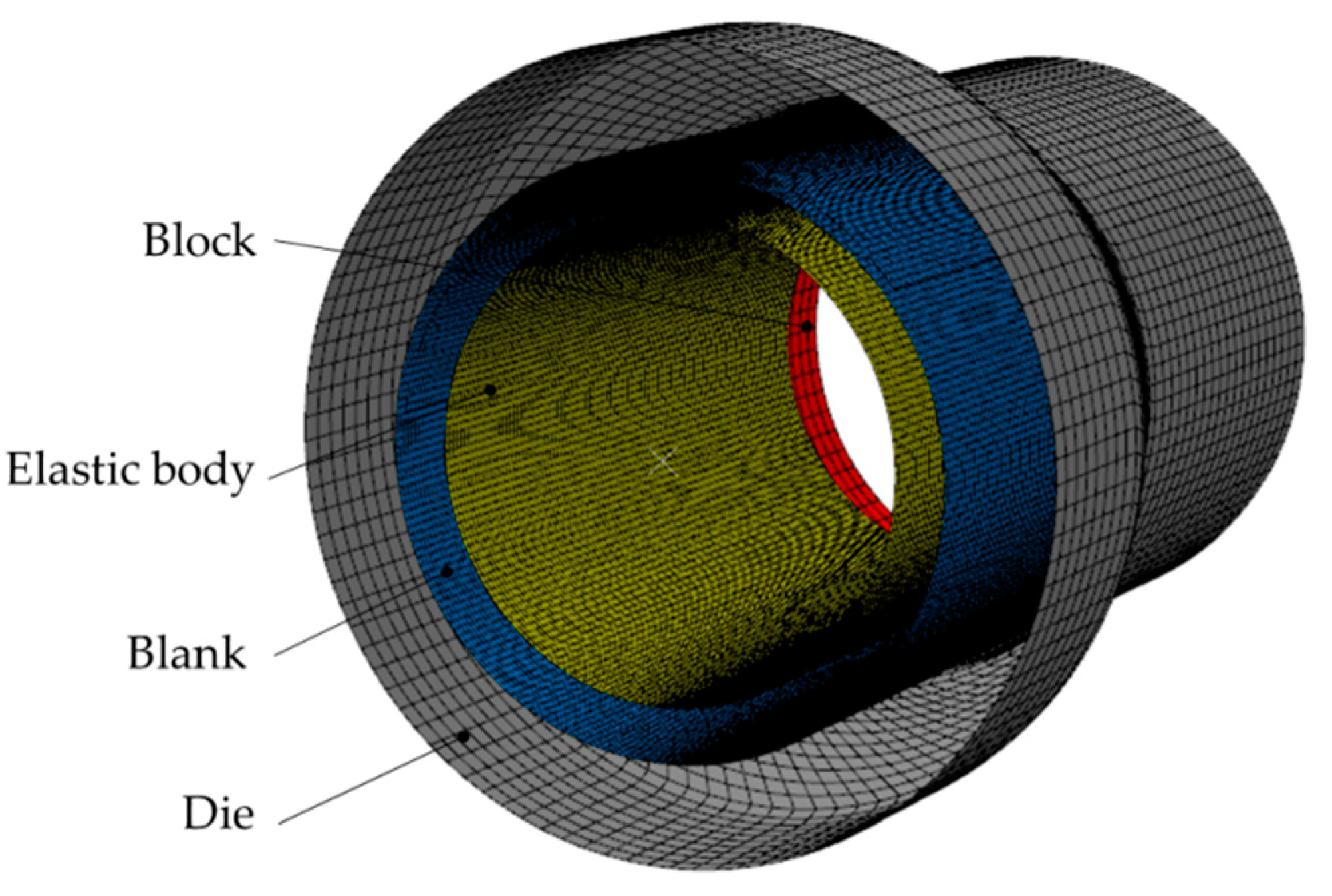 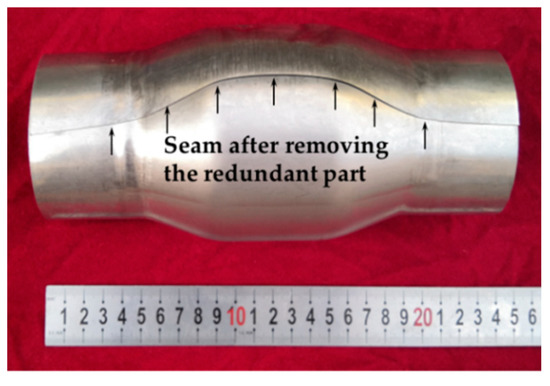 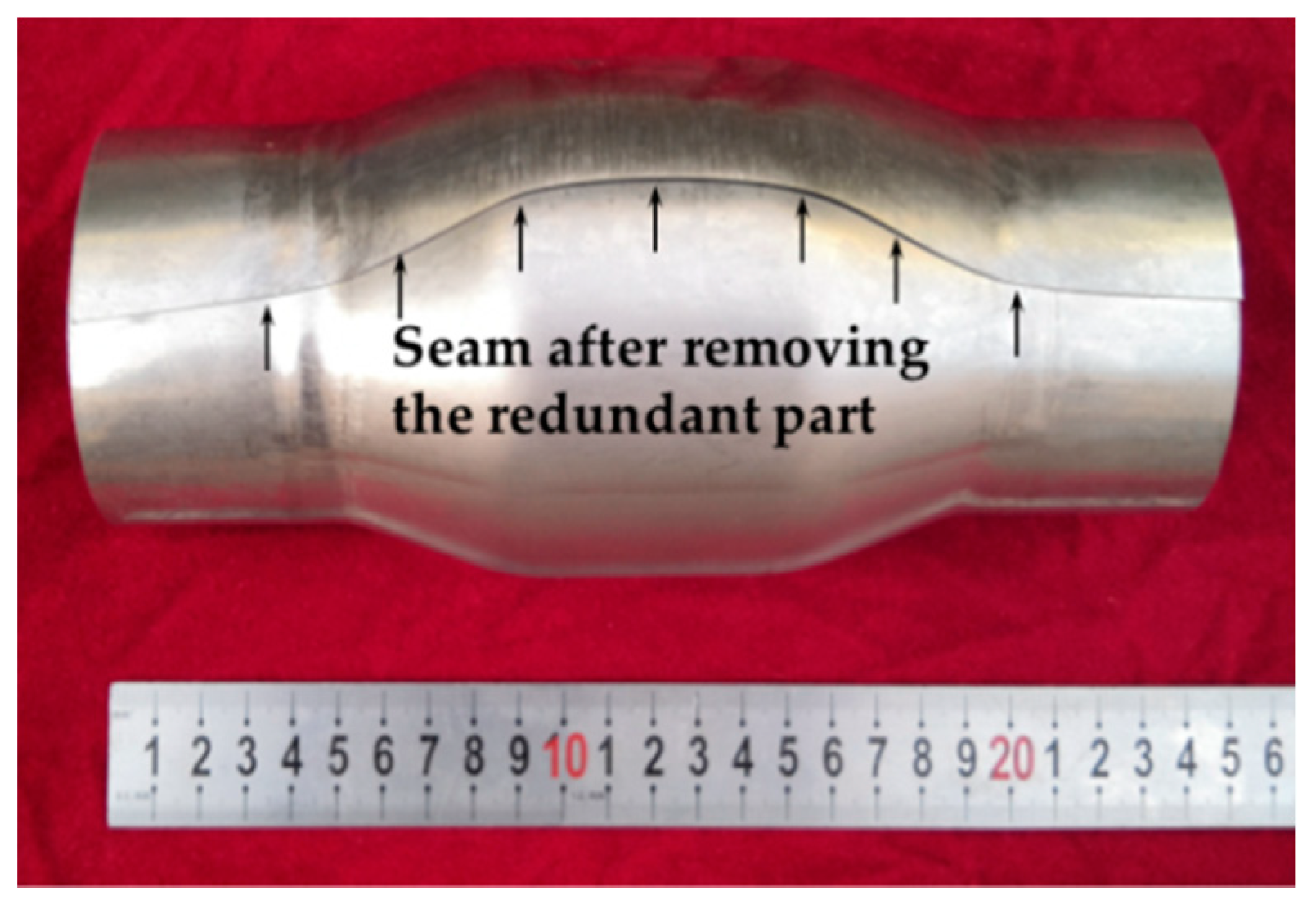 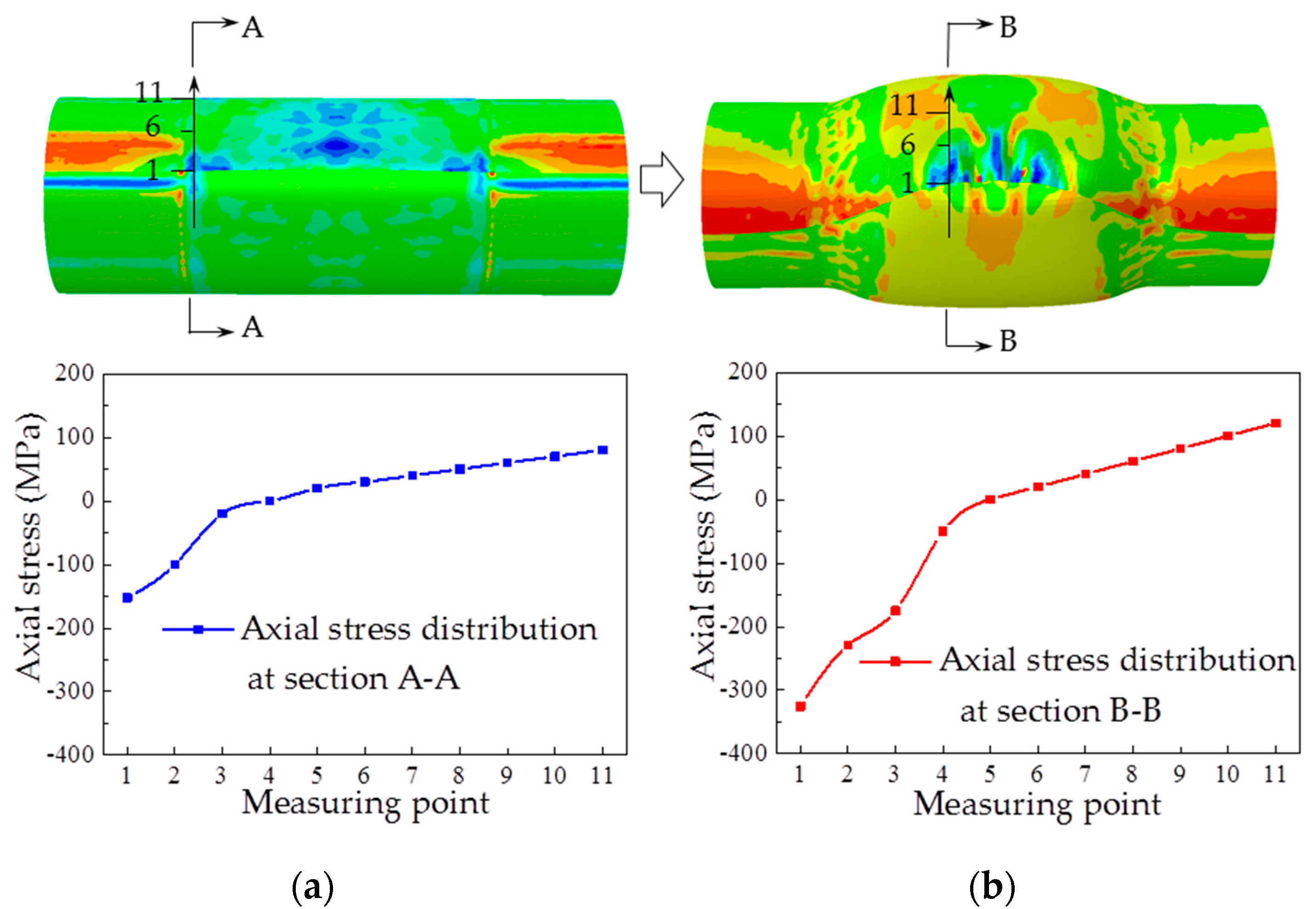 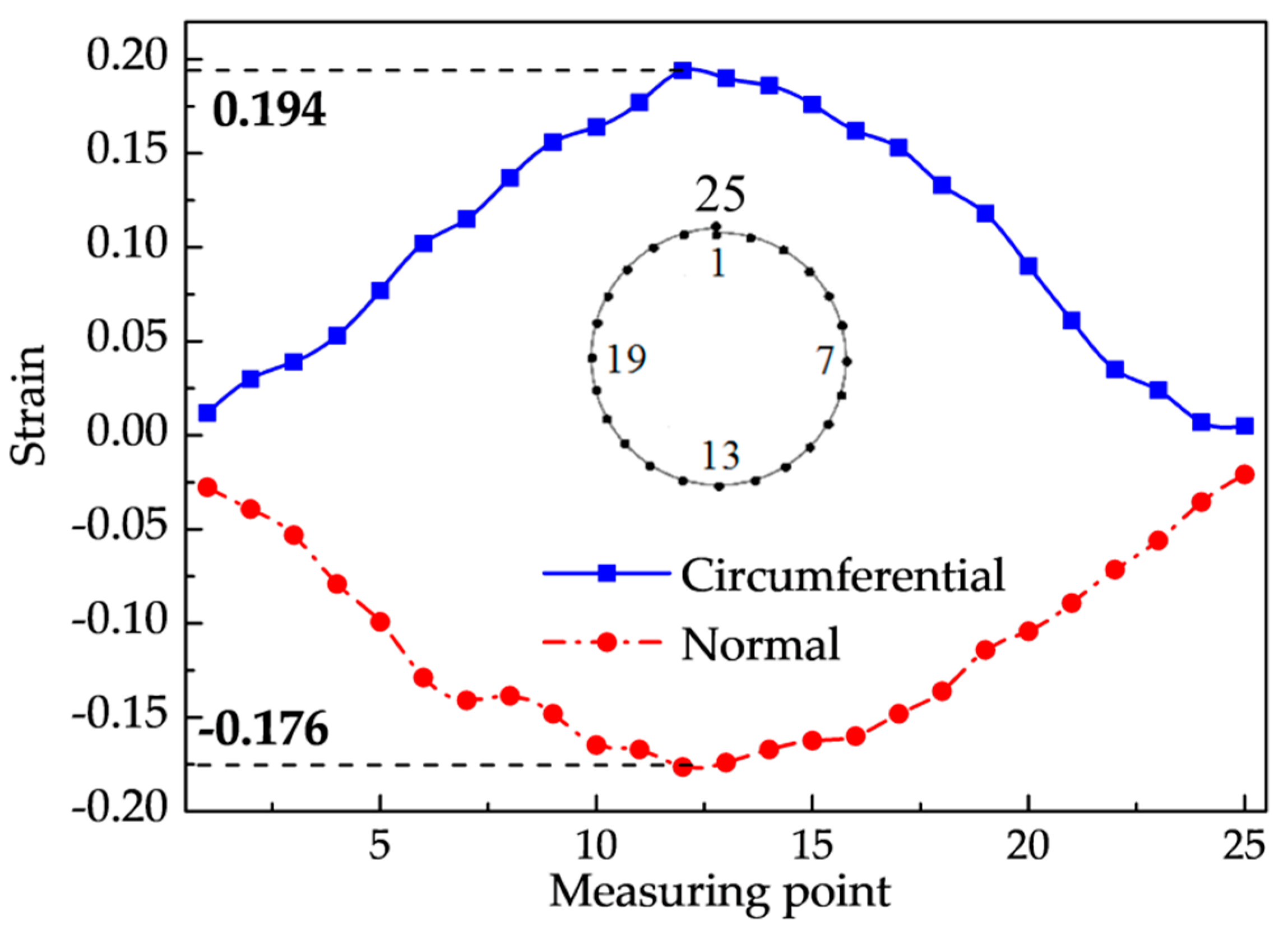 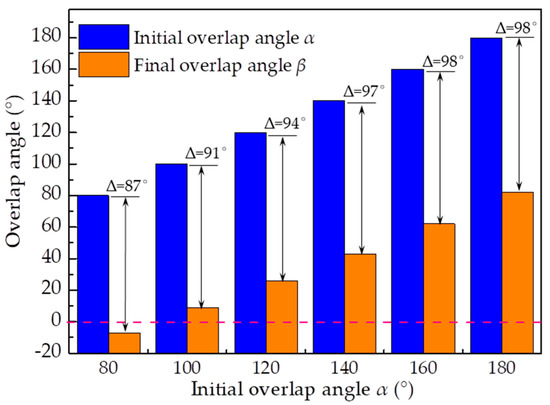 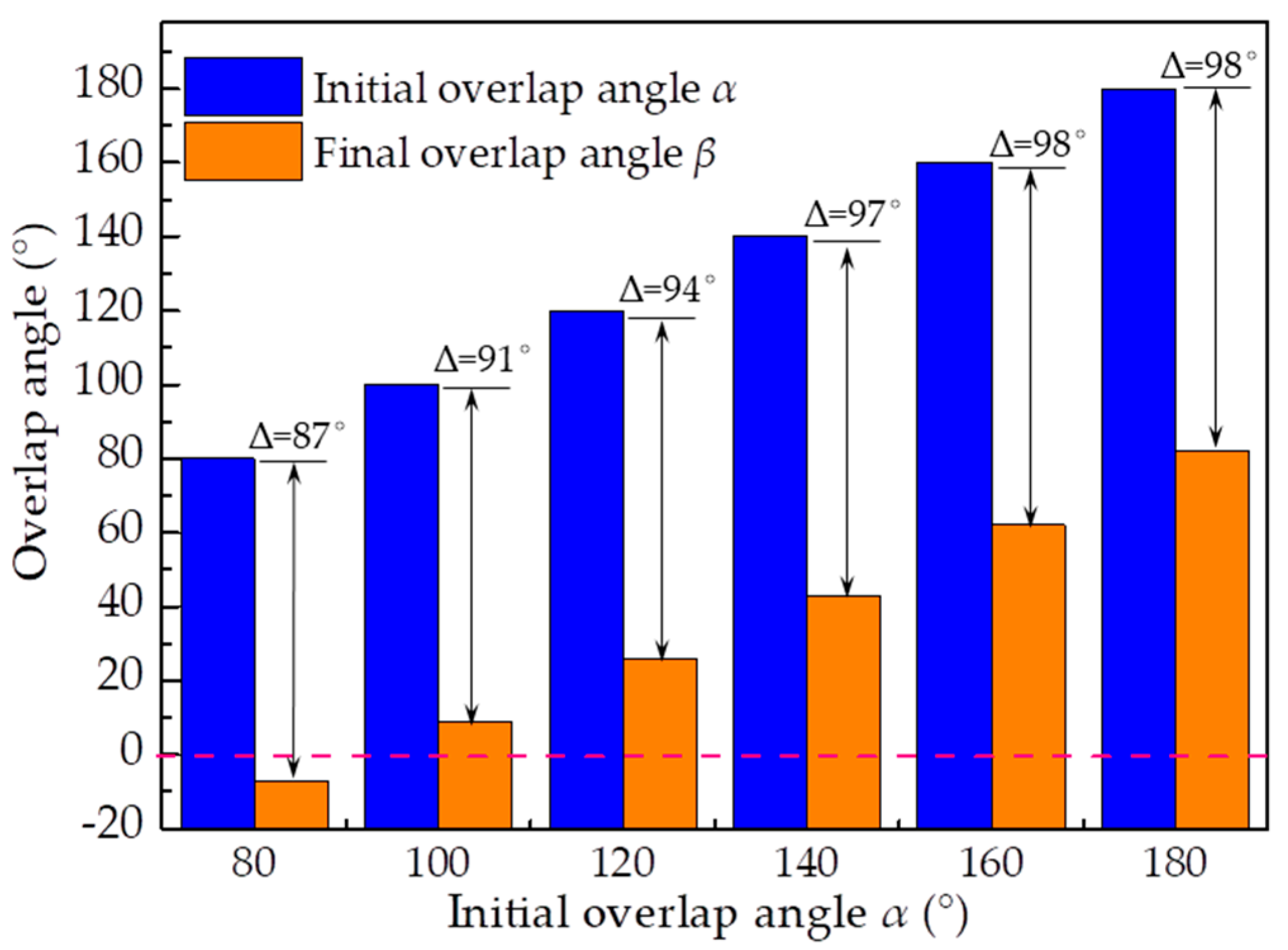 Table 1. Mechanical properties of AISI 304 stainless steel.
Table 1. Mechanical properties of AISI 304 stainless steel.
© 2020 by the authors. Licensee MDPI, Basel, Switzerland. This article is an open access article distributed under the terms and conditions of the Creative Commons Attribution (CC BY) license (http://creativecommons.org/licenses/by/4.0/).
We use cookies on our website to ensure you get the best experience. Read more about our cookies here.
Accept
We have just recently launched a new version of our website. Help us to further improve by taking part in this short 5 minute survey here. here.
Never show this again