The demands for the connection between thin dissimilar and similar materials in the fields of microelectronics and medical devices has promoted the development of laser impact welding. It is a new solid-state metallurgical bonding technology developed in recent years. This paper reviews the research progress of the laser impact welding in many aspects, including welding principle, welding process, weld interface microstructure and performance. The theoretical welding principle is the atomic force between materials. However, the metallurgical combination of two materials in the solid state by atomic force but almost no diffusion has not been confirmed by microstructure observation. The main theories used to explain the wave formation in impact welding were compared to conclude that caved mechanism and the Helmholz instability mechanism were accepted by researchers. The rebound of the flyer is still a critical problem for its application. With proper control of the welding parameters, the weld failure occurs on the base materials, indicating that the weld strength is higher than that of the base materials. Laser impact welding has been successfully applied in joining many dissimilar materials. There are issues still remained unresolved, such as surface damage of the flyer. The problems faced by laser impact welding were summaried, and its future applications were proposed. This review will provide a reference for the studies in laser impact welding, aiming process optimization and industrial application. View Full-Text
Keywords: laser impact welding; interfacial bonding mechanism; interface wave; diffusion laser impact welding; interfacial bonding mechanism; interface wave; diffusion
►▼ Show Figures 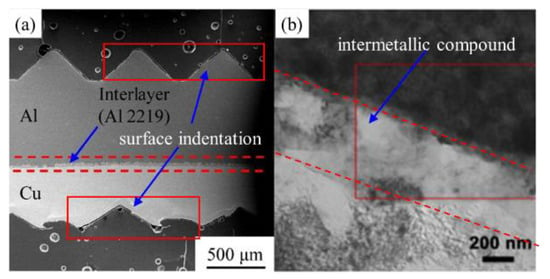