Perfectionism, Body Satisfaction and Dieting in Athletes: The Role of Gender and Sport Type
Next Article in Special Issue

Effect of a Home-based Exercise Program on Shoulder Pain and Range of Motion in Elite Wheelchair Basketball Players: A Non-Randomized Controlled Trial

The aim of the present study was to assess the effects of a 10 week shoulder home based exercise program (SHEP) on shoulder pain (SP) and range of motion (ROM) in a group of elite wheelchair basketball (WB) players. A convenience sample of elite WB players (n = 36, 15 males and 21 females), mean age of 26 years (SD 7.6, range 15–45)) were assigned to either an exercise or a control group, according to the use of the wheelchair during daily activities. The shoulder pain index for wheelchair basketball players (SPI-WB), functional tests and ROM were measured at baseline and after a 10 week intervention. In the analysis of the SPI-WB scores, for the exercise and control groups separately, there were no significant reductions of SPI-WB scores after intervention. Related to the analysis between groups after 10 weeks of intervention, there were no significant differences in changes between the exercise and control groups (Z = 0.840, p > 0.05, r = 0.743). In this regard, there was a significant change after the intervention for shoulder extension ROM (Z = 2.81, p ≤ 0.05, r = 0.249). Shoulder Pain did not increase along the 10 weeks of the SHEP development in WB players who reported SP before the intervention program. However, in those players who started the intervention without SP, as no increase in SP was observed and players were free of injury. An exercise program could be a tool to maintain shoulder health and prevent injuries in elite WB players. View Full-Text
Keywords: adapted sport; Paralympic sport; wheelchair injuries; shoulder biomechanics; prevention; exercise adapted sport; Paralympic sport; wheelchair injuries; shoulder biomechanics; prevention; exercise
►▼ Show Figures 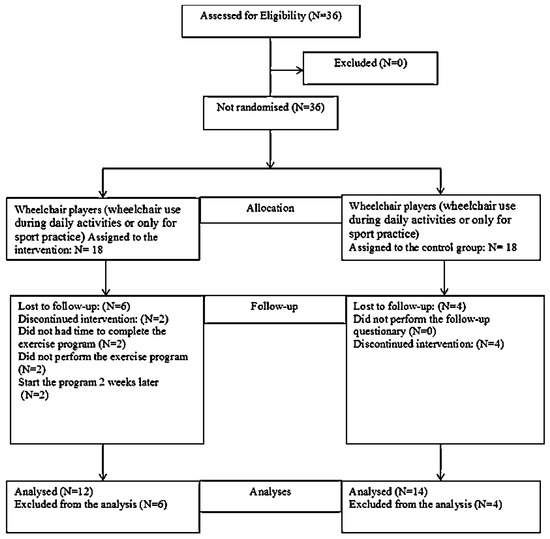