Hip thrust (HT) is a loaded bridging exercise that requires more hip extension than a back squat (SQ) does, while in a back squat, triple flex extension occurs. Due to the specificity of each exercise, it is claimed that HT gains can be better transferred to actions where hip extension occurs. In addition, strength improvements during squatting can be transferred in a greater way to vertical plane movement, such as vertical jumping. However, its effects on the performance of female soccer players are unclear. For this reason, the purpose of this study was to analyze a 7-week training program on performance variables using either HT or SQ exercises in female adolescent soccer players without lifting experience (N = 24, age = 16.82 ± 1.56 years, height = 1.64 ± 0.55 cm, body mass = 58.35 ± 6.28 kg). Players were randomized into three groups: A back squat group (SQG; N = 8), hip thrust group (HTG; N = 8), and control group (CG; N = 8). Participants in the HTG and SQG joined a progressive resistance training program twice per week for 7 weeks with either HT or SQ exercises. A countermovement jump, 10–20 m sprint, T-test, and barbell velocity during HTs and SQs (with the load that represents ~60 and ~80% RM) were measured before and after the intervention. The HTG showed greater improvements in the 10-m sprint (d = 0.7), 20-m sprint (d = 0.46), T-test (d = 0.36), and barbell velocity at 80% repetition maximal (RM) (d = 0.53) and 60% RM (d = 1.02) during hip thrusts, while the SQG showed higher barbell velocity at 80% RM (d = −0.7) during back squats. These results may be useful for strength and conditioning coaches working with adolescent female soccer athletes, since both strengthening exercises improved performance in different ways due to the nature of the exercise.
Keywords: countermovent jump; mean concentric velocity; strength; female soccer; force vector theory; transference countermovent jump; mean concentric velocity; strength; female soccer; force vector theory; transference

Decisive situations during soccer require strength, power, and speed. In particular, straight sprinting is the most determining action in a match result, as it is the most common action that precedes goal scoring [1]. Previous evidence has shown that resistance training has a key role in improving physical capabilities: Increased strength, muscle power, rate of force development (RFD), and the capacity to perform sport demands [2]. However, strength gains may be optimized according to load vector orientation [3,4,5,6,7].
Hip thrust (HT) and back squat (SQ) are two exercises used to improve lower limb strength [8,9,10,11,12,13]. Hip thrust is a horizontally loaded bridging exercise that requires hip extension moment production to displace a load [14]. Because of this exercise’s horizontal nature, it has been theorized that it may be great transferred to sports in which hip extension occurs and thus horizontal force production is needed [15].
On the other hand, the back squat is an axially loaded exercise in which triple flex extension (hip, knee, and ankle) occurs [16]. Despite the close relationship between back squat and horizontal movements (i.e., sprinting) [17] from an electromyographical point of view, there is greater electromyography (EMG) activation of hip extensor muscles in hip thrust than in back squat for the same relative load (10 RM) [18]. In addition, there is research that has attempted to identify the mechanical variables of linear sprint performance. Much of the research has shown that horizontal ground reaction force (GRF) correlates with maximal speed, mean speed, and the distance covered in 4 s during the sprint. In comparison, vertical GRF only correlates with top speed [19]. Due to the importance of sprinting and acceleration in team sports, some research has analyzed the influence of strength training programs in those performance variables, showing that improvements have vector-specific transference [8,9,10,20,21].
To the best of our knowledge, there is only one study that has investigated differential benefits between barbell hip thrusts and front squat exercises [10]. However, it was only conducted with male rugby participants. The study observed that in the hip thrust group, there were greater improvements in sprint, horizontal jump, and hip thrust 3 RM. In comparison, there were greater improvements in the vertical jump and front squat 3 RM for the front squat group. While these results were promising, there is currently no existing research that has compared the effects of hip thrust exercises to back squat exercises, especially in adolescent female soccer players. As the training background modifies the relationship between force–power–velocity variables and performance parameters [22], the purpose of this study was to compare performance differences between hip thrust and back squat exercises in a 7-week training program.

This study compared strength adaptations, running, and changes in speed direction in response to a 7-week training program of hip thrust or back squat resistance training. The study took place at the end of the competitive season, with players being given two complete rest days before the test. Players were instructed to refrain from physical activity during rest days. This was a single-center, parallel-group, randomized controlled trial with equal randomization (1:1). Each group was assigned to perform the hip thrust or back squat twice per week for 7 weeks for a total of 14 sessions and 48 h of rest between sessions. Performance variables were collected before and after the 7-week training period.

Twenty-four adolescent female soccer players (age: 16.82 years ± 1.56; height: 164.3 cm ± 5.52; body mass: 58.35 kg ± 6.28, without previous lifting experience) participated in the study and were randomized into three groups: A back squat group (SQG, n = 8), hip thrust group (HTG, n = 8), and control group (CG, n = 8). No injuries were reported at the starting point of the training protocol. All participants were enrolled in a female soccer team (national sub-elite level, three training sessions/week).
During the intervention period, participants were not allowed to perform lower limb strength training outside of the experiment protocol. To ensure optimal performance and the safety of all participants, two orientation sessions were conducted. All subjects were asked to abstain from unaccustomed exercise along with any medications and/or dietary supplements. Written informed consent was obtained from all subjects and their legal guardians: Moreover, the researchers met with the participants to explain the study design and the requirements. The study and informed consent procedures were approved by the Camilo José Cela Ethics Committee in accordance with the latest version of the Declaration of Helsinki. Prior to pre-intervention assessment, subjects participated in a familiarization session. During this session, all participants performed every test and were technically evaluated in both strengthening exercises [14,16]. Another aim of this session was to teach athletes to lift with maximal intentional velocity.

Data are presented as mean ± standard deviation. All data were entered into the statistical analysis program SPSS Statistics 21 (SPSS Inc., Chicago, IL, USA), and Shapiro–Wilk tests were performed to ensure normality. Values of p ≤ 0.05 were indicative that these values had a normal distribution. Effect size (ES) statistical analysis was calculated using Cohen‘s d ((between groups: , where M1 and M2 are the mean changes (Mpost–Mpre) for each group, and SDpooled is the pooled standard deviation of changes from each group. Within groups, , where Md is the mean difference from pre-to-post and Sd is the standard deviation of differences between subjects, which was defined as small, medium, and large for 0.20, 0.50, and 0.80, respectively [31]. Quantitative chances of beneficial/better or detrimental/poorer effects were assessed qualitatively as follows: 0–5% very unlikely, 5–25% unlikely, 25–75% possible (unclear within group assessment), 75–95% likely, and 95–100% very likely [32]. A substantial effect was set at >75%. If the chances of having beneficial/better and detrimental/poorer performances were both >5%, the true difference was assessed as unclear. Ninety percent (90%) confidence limits (CLs) of the ES were also calculated. 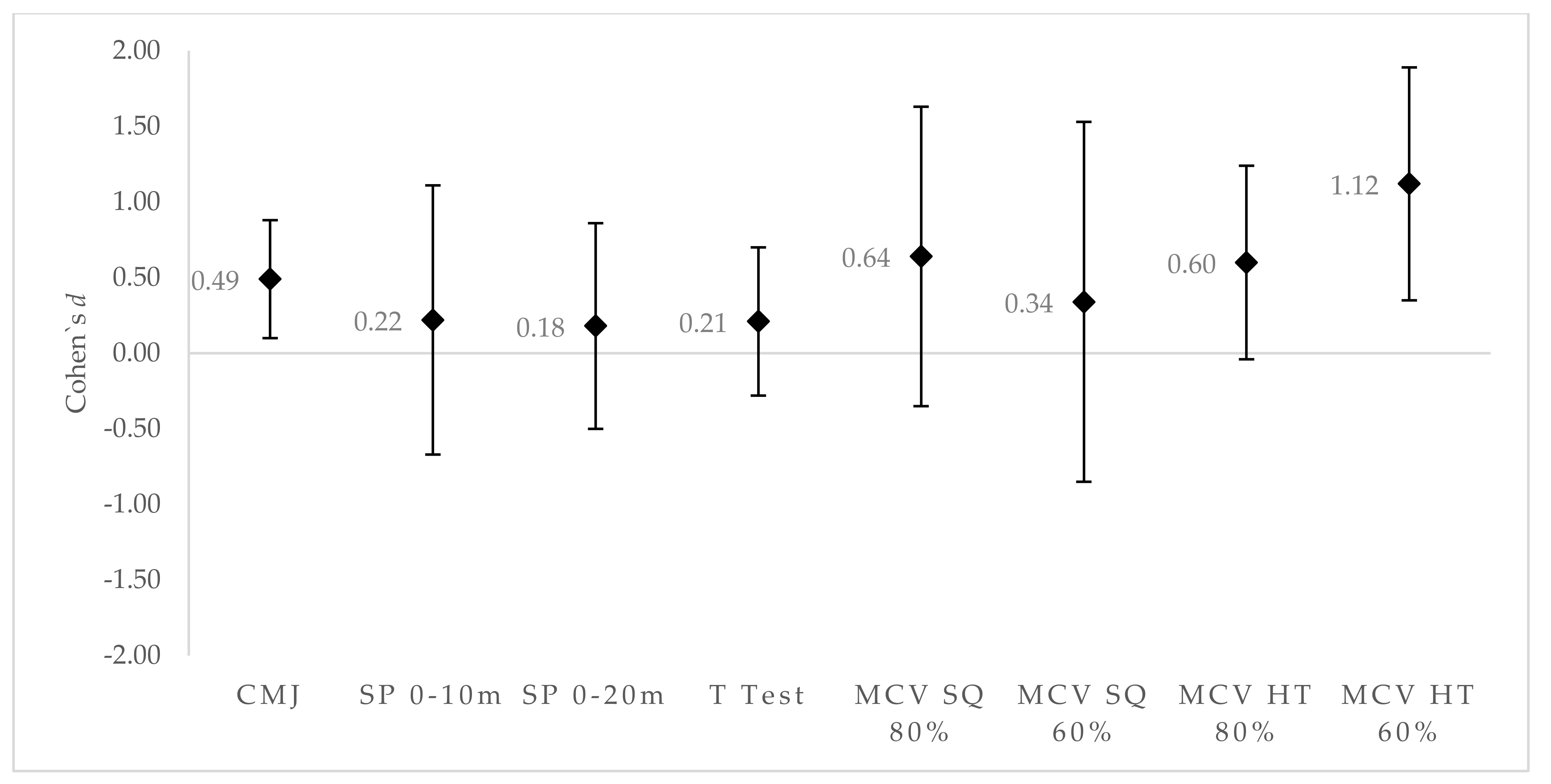