The Role of the Prader-Willi Syndrome Critical Interval for Epigenetic Regulation, Transcription and Phenotype
Previous Article in Journal

The Cytoplasm Affects the Epigenome in Drosophila melanogaster

Cytoplasmic components and their interactions with the nuclear genome may mediate patterns of phenotypic expression to form a joint inheritance system. However, proximate mechanisms underpinning these interactions remain elusive. To independently assess nuclear genetic and epigenetic cytoplasmic effects, we created a full-factorial design in which representative cytoplasms and nuclear backgrounds from each of two geographically disjunct populations of Drosophila melanogaster were matched together in all four possible combinations. To capture slowly-accumulating epimutations in addition to immediately occurring ones, these constructed populations were examined one year later. We found the K4 methylation of histone H3, H3K4me3, an epigenetic marker associated with transcription start-sites had diverged across different cytoplasms. The loci concerned mainly related to metabolism, mitochondrial function, and reproduction. We found little overlap (<8%) in sites that varied genetically and epigenetically, suggesting that epigenetic changes have diverged independently from any cis-regulatory sequence changes. These results are the first to show cytoplasm-specific effects on patterns of nuclear histone methylation. Our results highlight that experimental nuclear-cytoplasm mismatch may be used to provide a platform to identify epigenetic candidate loci to study the molecular mechanisms of cyto-nuclear interactions. View Full-Text
Keywords: epigenetics; mitochondria; mito-nuclear coevolution; Wolbachia epigenetics; mitochondria; mito-nuclear coevolution; Wolbachia
►▼ Show Figures 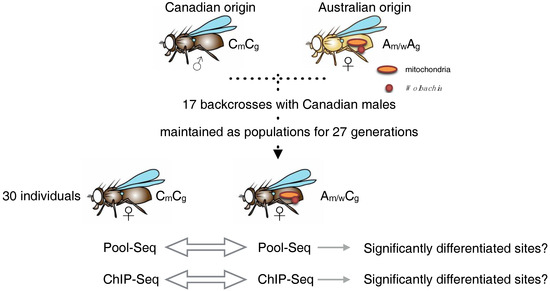