Knowledge of the diagnostic features and native ranges of invasive pests is vital for their correct identification and monitoring. In this regard, the diagnostic characters and geographical ranges of two potentially invasive Asian buprestid species: the quarantine apple tree pest, Agrilus mali Matsumura, and the poplar pest A. fleischeri Obenberger are studied and analyzed. Based on the examination of museum collections and literature sources, the diagnostic characters to distinguish both species from their congeners are discussed, the comprehensive databases of records of the exact collecting sites are compiled, and detailed maps of their ranges are generated. Occurrence of A. mali in Japan is not confirmed. Outbreak sites of A. mali in Xinjiang most likely represent the newly forming invasion areas; their proximity to the wild apple stands in the Kazakh part of the Tien Shan is a direct threat to Kazakhstan and adjacent countries. Sites damaged by A. fleischeri in Liaoning are situated within its native range; the outbreaks were likely triggered by the switch from indigenous to introduced poplars. The results of the study will facilitate the correct identification and monitoring of the pests in case of their findings in new areas. 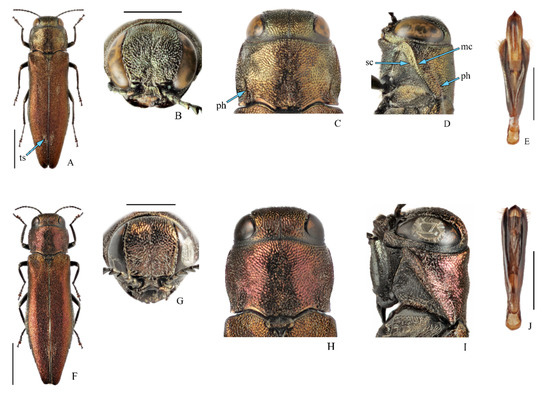