Global climate change is resulting in a wide range of biotic responses, including changes in diel activity and seasonal phenology patterns, range shifts polewards in each hemisphere and/or to higher elevations, and altered intensity and frequency of interactions between species in ecosystems. Oak (Thaumetopoea processionea) and pine (T. pityocampa) processionary moths (hereafter OPM and PPM, respectively) are thermophilic species that are native to central and southern Europe. The larvae of both species are gregarious and produce large silken ‘nests’ that they use to congregate when not feeding. During outbreaks, processionary caterpillars are capable of stripping foliage from their food plants (oak and pine trees), generating considerable economic damage. Moreover, the third to last instar caterpillars of both species produce copious hairs as a means of defence against natural enemies, including both vertebrate and invertebrate predators, and parasitoids. These hairs contain the toxin thaumetopoein that causes strong allergic reactions when it comes into contact with human skin or other membranes. In response to a warming climate, PPM is expanding its range northwards, while OPM outbreaks are increasing in frequency and intensity, particularly in northern Germany, the Netherlands, and southern U.K., where it was either absent or rare previously. Here, we discuss how warming and escape from co-evolved natural enemies has benefitted both species, and suggest possible strategies for biological control. View Full-Text
Keywords: enemy-release hypothesis; invasion; global change; Lepidoptera; forest; public health; urticating setae; pest insect; biodiversity enemy-release hypothesis; invasion; global change; Lepidoptera; forest; public health; urticating setae; pest insect; biodiversity
►▼ Show Figures 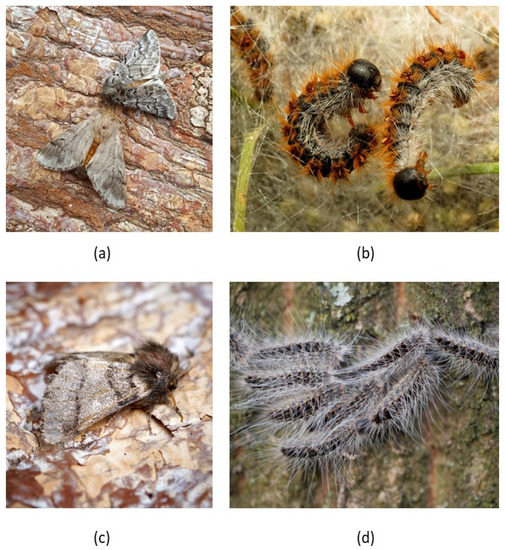