The Effect of Ground Type on the Jump Performance of Adults of the Locust Locusta migratoria manilensis: A Preliminary Study
Previous Article in Special Issue

Host utilization information is critical to managers for estimating the hosts at risk and potential geographic range for gypsy moths from different geographic origins. In this study, the development and survival of gypsy moths from all three subspecies on 13 North American conifers and three broadleaf hosts were compared. There was variation in the ability of gypsy moth larvae from different geographic origins to utilize (survive and develop on) key North American conifers. However, that variation was not consistent within gypsy moth subspecies, but instead was more consistent with populations from different origins being preadapted to utilize different hosts and having different biologic traits. Some Asian populations developed and survived well on some conifers while populations from Europe and North America gained weight faster and/or survived better than some Asian populations. Although development was slower and survival poorer on several of the conifers, first instar larvae were able to utilize conifers unless the needles were tough or feeding deterrents were present. Host phenology was also critical since the early instars fed preferentially on new foliage or buds. Gypsy moth larvae can utilize many hosts, so this makes it a very adaptable invasive species that warrants taking measures to prevent its spread. View Full-Text
Keywords: host utilization; Lymantria dispar; gypsy moth; survival; development; conifers host utilization; Lymantria dispar; gypsy moth; survival; development; conifers
►▼ Show Figures 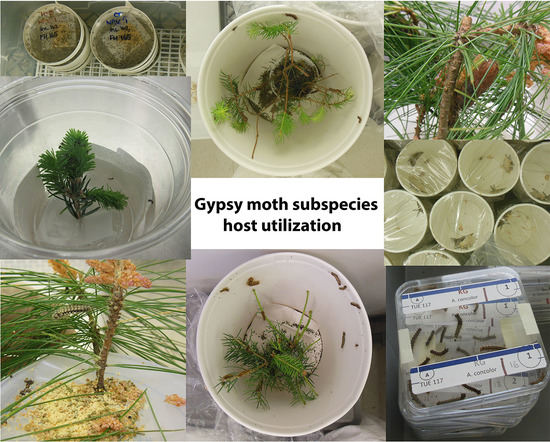