The Effect of Ground Type on the Jump Performance of Adults of the Locust Locusta migratoria manilensis: A Preliminary Study
Previous Article in Journal

Detection of the Lychee Erinose Mite, Aceria litchii (Keifer) (Acari: Eriophyidae) in Florida, USA: A Comparison with Other Alien Populations

Minimum Winter Temperature as a Limiting Factor of the Potential Spread of Agrilus planipennis, an Alien Pest of Ash Trees, in Europe

The emerald ash borer, EAB (Agrilus planipennis) is a devastating alien pest of ash trees. It is spreading in European Russia and Ukraine and will appear in other European countries. Our aim was to determine the regions of Europe where the winter temperature drops low enough to prevent A. planipennis establishment. We calculated the minimum daily air temperature from 2003–2019 for each grid square (0.5° × 0.5°) in East Asia, North America and Europe and determined the minimum daily temperature in the grid squares where A. planipennis was recorded. Temperatures of −30 to −33 °C occur in the northern portions of the pest range on all continents. No established population has been recorded in localities where temperatures below −34 °C occur. This temperature is close to the absolute supercooling point of A. planipennis larva (−35.3 °C). It is unlikely that low temperatures could prevent the spread of A. planipennis in northern Western Europe (Sweden, Norway, Finland, etc.), since the temperature in this area did not fall to −34 °C from 2003–2019. However, such temperatures are not rare in eastern European Russia (Kostroma, Vologda, Orenburg regions, etc.), where Fraxinus pennsylvanica and F. excelsior occur. These regions could potentially become refuges for these ash species. View Full-Text
Keywords: emerald ash borer; EAB; Norway; Finland; Sweden; European Russia; low temperature emerald ash borer; EAB; Norway; Finland; Sweden; European Russia; low temperature
►▼ Show Figures 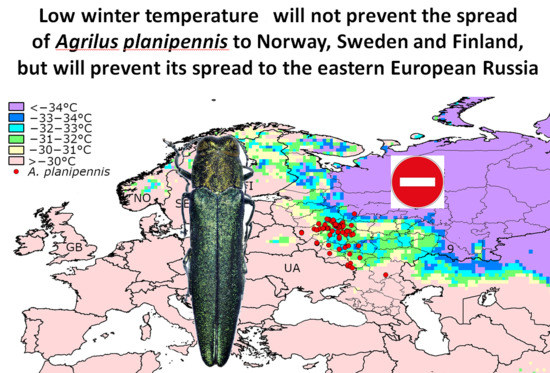 
Orlova-Bienkowskaja, Marina J.; Bieńkowski, Andrzej O. 2020. "Minimum Winter Temperature as a Limiting Factor of the Potential Spread of Agrilus planipennis, an Alien Pest of Ash Trees, in Europe." Insects 11, no. 4: 258.