Crosstalk among Indoleamines, Neuropeptides and JH/20E in Regulation of Reproduction in the American Cockroach, Periplaneta americana
Previous Article in Special Issue

The Effects of Weather on the Flight of an Invasive Bark Beetle, Pityophthorus juglandis

The walnut twig beetle, Pityophthorus juglandis Blackman (Coleoptera: Scolytidae), vectors the fungus Geosmithia morbida, which has been implicated in thousand cankers disease of walnut. Little is known about the flight behavior of the insect across seasons, or about the variability in its flight patterns with weekly fluctuations in weather. We sampled flying adults weekly over a 142-week period (from 29 August, 2011 to 2 June, 2014) with 12-unit black plastic multiple funnel traps baited with a male-produced aggregation pheromone in California, USA. Up to 5000 beetles were captured per trap per week, although catches in most weeks were less than 100 insects. Trap catches were regressed against terms for precipitation, solar radiation, vapor pressure, air temperature, relative humidity, wind speed, and trap catches in preceding weeks. The number of beetles captured in each of the preceding two weeks explained most variation in a current week’s catch. This strong temporal autocorrelation was present in regression models developed for males, females, and both sexes pooled. These models were improved by including two environmental variables. Captures of P. juglandis increased with mean weekly air temperature and decreased with increasing mean minimum relative humidity. The percentage of variation in male, female, or total trap catch explained by the temporal variables and the two environmental variables in these multiple regression models ranged from 72% to 76%. While the flight of this invasive insect will likely be affected by site-specific factors as it spreads to new areas, the strong temporal correlation present in this system may provide a useful starting point for developing flight models for newly invaded areas. View Full-Text
Keywords: climate; humidity; invasive species; Juglans nigra; regression analysis; Scolytidae; temperature; thousand cankers disease; walnut twig beetle; weather climate; humidity; invasive species; Juglans nigra; regression analysis; Scolytidae; temperature; thousand cankers disease; walnut twig beetle; weather
►▼ Show Figures 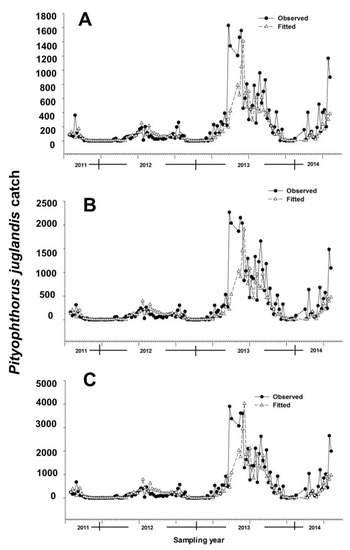