The Effects of Weather on the Flight of an Invasive Bark Beetle, Pityophthorus juglandis
Previous Article in Journal

Pollutants and Their Interaction with Diseases of Social Hymenoptera

Crosstalk among Indoleamines, Neuropeptides and JH/20E in Regulation of Reproduction in the American Cockroach, Periplaneta americana

Although the regulation of vitellogenesis in insects has been mainly discussed in terms of ‘classical’ lipid hormones, juvenile hormone (JH), and 20-hydroxyecdysone (20E), recent data support the notion that this process must be adjusted in harmony with a nutritional input/reservoir and involvement of certain indoleamines and neuropeptides in regulation of such process. This study focuses on crosstalks among these axes, lipid hormones, monoamines, and neuropeptides in regulation of vitellogenesis in the American cockroach Periplaneta americana with novel aspects in the roles of arylalkylamine N-acetyltransferase (aaNAT), a key enzyme in indoleamine metabolism, and the enteroendocrine peptides; crustacean cardioactive peptide (CCAP) and short neuropeptide F (sNPF). Double-stranded RNA against aaNAT (dsRNAaaNAT) was injected into designated-aged females and the effects were monitored including the expressions of aaNAT itself, vitellogenin 1 and 2 (Vg1 and Vg2) and the vitellogenin receptor (VgR) mRNAs, oocyte maturation and changes in the hemolymph peptide concentrations. Effects of peptides application and 20E were also investigated. Injection of dsRNAaaNAT strongly suppressed oocyte maturation, transcription of Vg1, Vg2, VgR, and genes encoding JH acid- and farnesoate O-methyltransferases (JHAMT and FAMeT, respectively) acting in the JH biosynthetic pathway. However, it did not affect hemolymph concentrations of CCAP and sNPF. Injection of CCAP stimulated, while sNPF suppressed oocyte maturation and Vgs/VgR transcription, i.e., acting as allatomedins. Injection of CCAP promoted, while sNPF repressed ecdysteroid (20E) synthesis, particularly at the second step of Vg uptake. 20E also affected the JH biosynthetic pathway and Vg/VgR synthesis. The results revealed that on the course of vitellogenesis, JH- and 20E-mediated regulation occurs downstream to indoleamines- and peptides-mediated regulations. Intricate mutual interactions of these regulatory routes must orchestrate reproduction in this species at the highest potency. View Full-Text
Keywords: vitellogenesis; Periplaneta americana; aaNAT; juvenile hormone; 20-hydroxyecdysone; neuropeptides; biogenic amines; oocytes vitellogenesis; Periplaneta americana; aaNAT; juvenile hormone; 20-hydroxyecdysone; neuropeptides; biogenic amines; oocytes
►▼ Show Figures 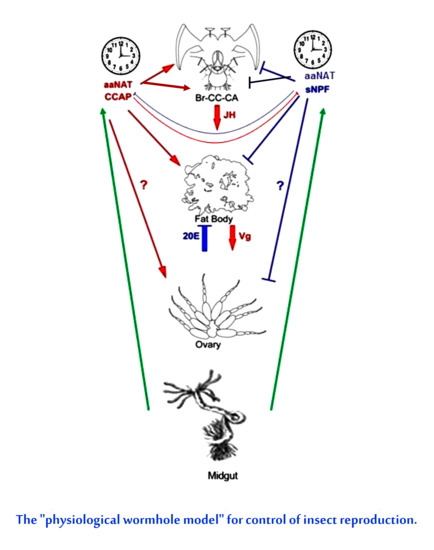