The Role of Annual Flowering Plant Strips on a Melon Crop in Central Spain. Influence on Pollinators and Crop
Previous Article in Special Issue

There are many reasons to study the survival and recovery of animals after starvation in simulated transport conditions or other passive dispersal methods. To do so, we chose Dendrolimus pini, an economically important pest of Scots pine with great potential in terms of passive dispersal outside its territory. In this work, we sought to answer the following questions: What is the maximum survival of different instar larvae after total starvation? Does access to dry tissues of the preferred host plant extend the lifespan of the larvae? Does the possibility of larvae recovery exist after starvation for various periods? We found that older larvae survived longer without food than younger larvae. Moreover, dry food did not extend the lifespan of the larvae. Our observations showed that insects were interested in food and tasted it at the beginning, but they did not feed on it for long. Furthermore, larvae recovery was indeed possible, and the time of starvation did not significantly affect this. We generally concluded that the D. pini larvae were characterized by the ability to survive without food for up to one month, which confirms that this species is able to survive long durations of transport to almost anywhere in the world. View Full-Text
Keywords: body mass; folivorous insect; instar; Lepidoptera; potentially invasive pest; Scots pine; starvation period body mass; folivorous insect; instar; Lepidoptera; potentially invasive pest; Scots pine; starvation period
►▼ Show Figures 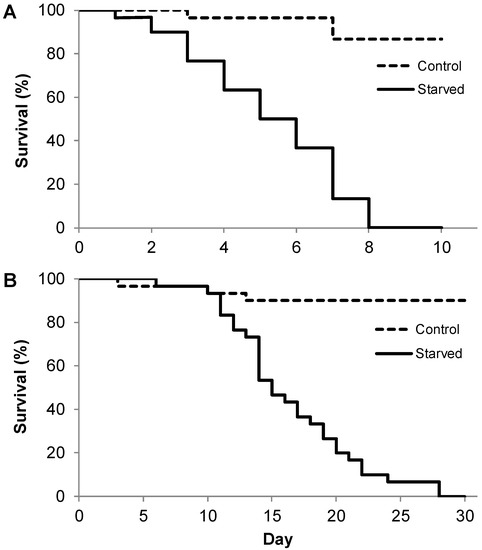