A Vegan Athlete’s Heart—Is It Different? Morphology and Function in Echocardiography

:
Plant-based diets are a growing trend, including among athletes. This study compares the differences in physical performance and heart morphology and function between vegan and omnivorous amateur runners. A study group and a matched control group were recruited comprising N = 30 participants each. Eight members of the study group were excluded, leaving N = 22 participants. Members of both groups were of similar age and trained with similar frequency and intensity. Vegans displayed a higher VO2max (54.08 vs. 50.10 mL/kg/min, p < 0.05), which correlated positively with carbohydrate intake (ρ = 0.52) and negatively with MUFA (monounsaturated fatty acids) intake (ρ = −0.43). The vegans presented a more eccentric form of remodelling with greater left ventricular end diastolic diameter (LVEDd, 2.93 vs. 2.81 cm/m2, p = 0.04) and a lower relative wall thickness (RWT, 0.39 vs. 0.42, p = 0.04) and left ventricular mass (LVM, 190 vs. 210 g, p = 0.01). The left ventricular mass index (LVMI) was similar (108 vs. 115 g/m2, p = NS). Longitudinal strain was higher in the vegan group (−20.5 vs. −19.6%, p = 0.04), suggesting better systolic function. Higher E-wave velocities (87 vs. 78 cm/s, p = 0.001) and E/e′ ratios (6.32 vs. 5.6, p = 0.03) may suggest better diastolic function in the vegan group. The results demonstrate that following a plant-based diet does not impair amateur athletes’ performance and influences both morphological and functional heart remodelling. The lower RWT and better LV systolic and diastolic function are most likely positive echocardiographic findings.
Keywords:
echocardiography; vegan; athletes’ hearts; runners; diet 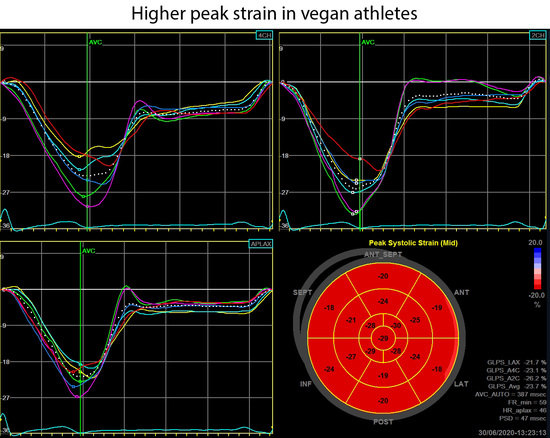 The vegan diet is one of the fastest-growing trends in nutrition [1]. Between 2014 and 2018, the number of followers of the vegan diet has increased by 600% in the US [2]. This causes both easier access to high-quality vegan products, as well as more research on plant-based diets and better access to knowledge about supplementation and the proper balancing of such diets. This trend can also be observed in the health and fitness industries. Many athletes decide to change their diet and many recent studies focused on the impact this has on their performance.
Regular amateur or professional endurance training induces many morphological and functional adaptations in the cardiovascular system. They include increased dimensions of the heart’s chambers and increased wall thickness and muscle mass. Such changes may mimic those observed in pathological conditions and sometimes require monitoring.
In echocardiographic examinations, endurance-trained athletes demonstrate an increased relative wall thickness (RWT), left ventricular mass (LVM), left ventricular end-diastolic internal diameter (LVIDd) and left atrial volume index (LAVI) [3]. The ejection fraction, however, remained similar to untrained control groups. Newer methods using speckle tracking methods to establish global longitudinal strain (GLS) may present more accurate data on the heart’s functioning. Recent research shows that GLS may be related to different levels of exercise among athletes and may be different in athletes compared to in healthy controls [4,5,6].
So far, very little information is available on how a vegan diet affects athletes’ hearts. The only research on the impact of a plant-based diet on the cardiovascular system addressed heart failure and other diseases [7,8]. The findings of these studies may suggest that it could potentially be beneficial for athletes. To the best of our knowledge, no study compared the echocardiographic parameters of vegan and non-vegan athletes. The aim of this study was to assess the differences in the athletes’ heart morphology and function and the correlation of these with dietary habits.

A study and control group were recruited. The participants were recruited from organized amateur running events, such as the Warsaw Marathon, and by online invitation published on social media. Inclusion criteria for the study group (vegan—V) were: having completed at least one organized running event with a distance of at least 10 km, declaring a vegan diet and regular training at least three times a week. The same criteria (excluding the vegan diet) applied to the control group (C), which was age-matched to the study group. The declared vegan diet was then verified by a dietetic survey and nutrition diary. Exclusion criteria for both groups were: age below 18 years, known cardiovascular or respiratory disease and taking any medication on a regular basis. Initially, both groups comprised 30 athletes each. Ultimately, six participants from the study group were excluded due to not following a vegan diet after the dietician’s verification and two were excluded due to a suboptimal acoustic window in echocardiography, which did not allow us to perform the required measurements accurately. As a result, the final study group consisted of 22 athletes, and the control group consisted of 30. This study uses the study population from previously published extensive research on plant-based diets in endurance athletes [9].
The study was approved by the Bioethics Committee of the Medical University of Warsaw: No. KB/214/2014 of 4 November 2014 with Annex No. KB/34/A/2015 of 6 May 2015. Written consent was acquired from all participants.

The tests carried out among all the participants included: anthropometric measurements (weight, height, skinfold measurement, body composition evaluation using bioimpedance analysis), complex dietetic evaluation based on a 4-day-long nutrition diary, spiroergometric testing on a treadmill and resting echocardiographic tests following current guidelines [10], including global longitudinal strain (GLS) evaluation using speckle tracking methods. In order to accommodate expected differences in height and weight among the participants, the parameters were indexed to the body surface area (BSA) calculated using Mosteller’s formula [11].
The echocardiographic measurements were carried out on a GE Vivid 6 echocardiograph using a 4S sector transducer. All the measurements were performed, recorded and evaluated offline using EchoPac (ver. 112 GE, USA) software by one experienced echocardiographer (WK). The chamber size measurements were performed as recommended [10]. The echocardiographer was blinded to the patients’ classifications to the V or C group. Segmental strains were calculated using utomated Function imaging (AFI, GE, USA) to obtain GLS measurements. The software automatically divided the left ventricle wall into 17 segments based on manually selected points, two basal and one apical. After the careful assessment of the adequacy of tissue tracing and any necessary adjustments, the software presented the strain curves of all 17 segments and reported peek systolic values. GLS was defined as the average of all examined segments. Following current recommendations, the results concerning LV strain were analysed in absolute values (higher representing better systolic function) [6].

The general characteristics of the participants are demonstrated in Table 1. The observed insignificant difference in age is a result of excluding eight members of the V group.
Athletes from the V group weighed significantly less, while being similarly tall. This resulted in lower BMI and BSA. The number of hours spent on training weekly was similar, as was the number of kilometres covered weekly.

The peak power output (measured in watts) reached in the treadmill test was similar in both groups. Performance parameters evaluated in the spiroergometry test are presented in Table 2. The absolute exercise capacity, measured as maximal oxygen consumption (VO2max, L/min), was similar in both groups, however the VO2max per kilogram of body mass (mL/min/kg) was higher in the V group. VO2max (mL/min/kg) correlated significantly with the total and per kilogram intake of carbohydrates (ρ = 0.43, ρ = 0.52, respectively) and correlated negatively with the intake of MUFAs (ρ = −0.43).

The morphological findings are demonstrated in Table 3. Vegans presented a more eccentric form of left ventricular remodeling, with greater left ventricular end diastolic diameter (LVEDd) and thinner LV walls (both the intraventricular septum in diastole (IVSd) and the posterior wall in diastole (PWd)). This resulted in a lower relative wall thickness. Both LVM and LVMI correlated negatively with PUFA intake (ρ = −0.38, ρ = −0.37, respectively). No significant differences were noticed in left atrium (LA) and right atrium (RA) sizes. LA enlargement (>34 mL/m2) was present in nearly 70% of athletes. Functional systolic and diastolic findings are shown in Table 4. Vegans displayed a higher GLS and higher E-wave velocities of mitral inflow, resulting in a higher E/e′. The GLS correlated positively with SFA and MUFA intakes (ρ = 0.34, r = 0.31, respectively). The E velocity correlated positively with the intake of plant proteins and carbohydrates (ρ = 0.32, ρ = 0.44, respectively) and correlated negatively with the intake of SFAs per kilogram of body mass (ρ = −0.036).