Nanosatellites for Biology in Space: In Situ Measurement of Bacillus subtilis Spore Germination and Growth after 6 Months in Low Earth Orbit on the O/OREOS Mission
Next Article in Special Issue

Ultradeep Microbial Communities at 4.4 km within Crystalline Bedrock: Implications for Habitability in a Planetary Context
Previous Article in Journal

Survivability of Anhydrobiotic Cyanobacteria in Salty Ice: Implications for the Habitability of Icy Worlds

Two anhydrobiotic strains of the cyanobacterium Chroococcidiopsis, namely CCMEE 029 and CCMEE 171, isolated from the Negev Desert in Israel and from the Dry Valleys in Antarctica, were exposed to salty-ice simulations. The aim of the experiment was to investigate the cyanobacterial capability to survive under sub-freezing temperatures in samples simulating the environment of icy worlds. The two strains were mixed with liquid solutions having sub-eutectic concentration of Na2SO4, MgSO4 and NaCl, then frozen down to different final temperatures (258 K, 233 K and 203 K) in various experimental runs. Both strains survived the exposure to 258 K in NaCl solution, probably as they migrated in the liquid veins between ice grain boundaries. However, they also survived at 258 K in Na2SO4 and MgSO4-salty-ice samples—that is, a temperature well below the eutectic temperature of the solutions, where liquid veins should not exist anymore. Moreover, both strains survived the exposure at 233 K in each salty-ice sample, with CCMEE 171 showing an enhanced survivability, whereas there were no survivors at 203 K. The survival limit at low temperature was further extended when both strains were exposed to 193 K as air-dried cells. The results suggest that vitrification might be a strategy for microbial life forms to survive in potentially habitable icy moons, for example in Europa’s icy crust. By entering a dried, frozen state, they could be transported from niches, which became non-habitable to new habitable ones, and possibly return to metabolic activity.
Keywords: vitrification; desert cyanobacteria; laboratory simulations; habitability; Europa; icy moons; liquid veins; ice crystals vitrification; desert cyanobacteria; laboratory simulations; habitability; Europa; icy moons; liquid veins; ice crystals

The strains used in our study are part of the Culture Collection of Microorganisms from Extreme Environments (CCMEE), maintained at the Department of Biology, University of Rome Tor Vergata. Hereafter, they are indicated as CCMEE 029 and CCMEE 171. Chroococcidiopsis sp. CCMEE 029 (N6904) and Chroococcidiopsis sp. CCMEE 171 (A789-2) were isolated by E. Imre Friedmann and Roseli Ocampo-Friedmann from cryptoendolithic growth in sandstones in Makhtesh Ramon, Negev desert (Israel) and in the University Valley, McMurdo Dry Valleys (Antarctica), respectively. For strain CCMEE 171 the growth optimum temperature is about 25 °C (unpublished), as reported for CCMEE 134, isolated from Beacon Valley in Antarctica [31]. The two strains are not axenic but routine transfer on agarized BG-11 medium [32] reduced the bacterial contamination to about 0.0001%. Cyanobacteria were grown under routine conditions at 25 °C in liquid BG-11 medium under a photon flux density of 40 μmol/m2/s provided by fluorescent cool-white bulbs under continuous light illumination. For the simulations reported below, cultures in the exponential growth phase (0.1–1 × 107 cells/ml) were used.

Icy samples were made, following [12], by preparing 10−4 M salt binary solutions, in ultrapure and sterile water (ddH2O), with MgSO4, Na2SO4 and NaCl as solute. For each salt solution three different simulations were performed at 258 K, 233 K and 203 K, by using a climatic chamber capable of reaching 198 K (Angelantoni DY340C, see Figure 2e,f in [33]). The temperature was measured by two Pt100 sensors, one located close to the sample and the other inside the chamber. The climatic chamber is hosted at the Mathematics and Physics Department of Roma Tre University and was designed and built to study different ice physical properties, as a support to the RIME experiment on board the JUICE 2022 ESA mission. It allows to control both temperature and humidity, and to generate temperature gradients as fast as 2 K/min, in cooling mode, and 4 K/min, in heating mode. In each experimental run the cooling time was different, about 20 min, 33 min and 48 min, at 258 K, 233 K and 203 K, as shown in Figure 1. For each experimental run, once reached the lowest value the sample was maintained at such temperature for 2 h.

2.3. Exposure of Cyanobacteria to Salty-Icy Environments

2.4. Evaluation of the Effects of Salt Solutions and Ddh2o on Cell Viability

Cyanobacterial viability after incubation in salt solutions and in ddH2O at RT was evaluated as follows: 1-mL culture aliquots were resuspended in 5 mL of 10−4 M solutions of MgSO4, Na2SO4 and NaCl or ddH2O as described above, and incubated at RT for 4 h (in parallel to salty-ice simulation experiments). Then cells were washed with BG-11 medium, resuspended in 5 mL of BG-11 medium, transferred in 25 mL culture flasks and incubated under routine culture conditions.

Air-dried cyanobacteria were obtained from 1-mL culture aliquots by centrifugation at 5000 g for 10 min and dried overnight under a sterile air stream. Dried pellets were exposed as follows: (i) at 233 K for 2 h by using the climatic chamber; (ii) 193 K for 72 h by using a laboratory refrigerator. Frozen samples were allowed to thaw at RT for about 2 h, resuspended in 5 mL of BG-11 medium in 25 cm2 culture flasks, and incubated under routine conditions. Controls were prepared by air-drying 1-mL culture aliquots as reported above, and by resuspending the air-dried pellets in 5 mL of BG-11 medium at the same time of the frozen samples.

The growth rate of each exposed sample and control transferred in 5 mL of BG-11 medium under routine culture conditions, was monitored for 3 weeks by performing optical density measurements at 730 nm. Values are reported as means, based on two independent simulations with three replicates.

After the exposure for 2 h at 258 K in icy samples containing NaCl, Na2SO4 or MgSO4, cells of strains CCMEE 171 and CCMEE 029 were transferred to liquid BG-11 medium under routine growth conditions. Strain CCMEE 171 survived in the three frozen salt solutions, as shown by their growth recovery (Figure 2A). However, after 21 days of growth, cell densities were lower than that of control, i.e., cells maintained in BG-11 medium under routine culture conditions (Figure 2A). By contrast, strain CCMEE 029 showed a growth recovery comparable to control after exposure to sub-freezing temperature in MgSO4 -H2O solution (Figure 2B); while a reduced growth occurred after exposure in the other salt solutions (Figure 2B). For both strains there were no survivors after exposure to 258 K in ddH2O (Figure 2A,B).

3.3. Enhanced Surival of the Cold Desert Strain in Salty-Icy Conditions at 233 K

In the experiment where strain CCMEE 171 was exposed to 233 K for 2 h, growth recovery occurred after transfer to liquid BG-11 medium under routine culture conditions (Figure 3A), regardless of the salt solution (NaCl, Na2SO4 or MgSO4). However, after 21 days of growth, cell samples exposed to sub-frozen solutions of NaCl and Na2SO4, reached cell densities reduced if compared to control (Figure 3A). Conversely, strain CCMEE 029 exposed to 233 K in each one of the salt solutions showed a delay in the recovery and cell densities were lower than control (Figure 3B). For both strains there were no survivors after exposure to 233 K in ddH2O (Figure 3A,B).

No survivors occurred among cells of strains CCMEE 171 and CCMEE 029 after being exposed for 2 h to 203 K, regardless of the salt used, because no increase in cell densities was observed after transfer to liquid BG-11 medium under routine culture conditions (Figure 4A,B). 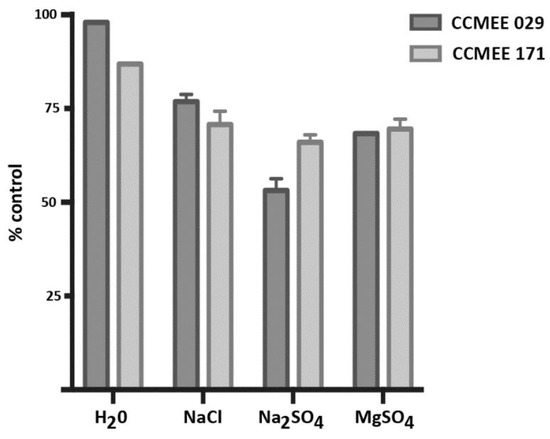 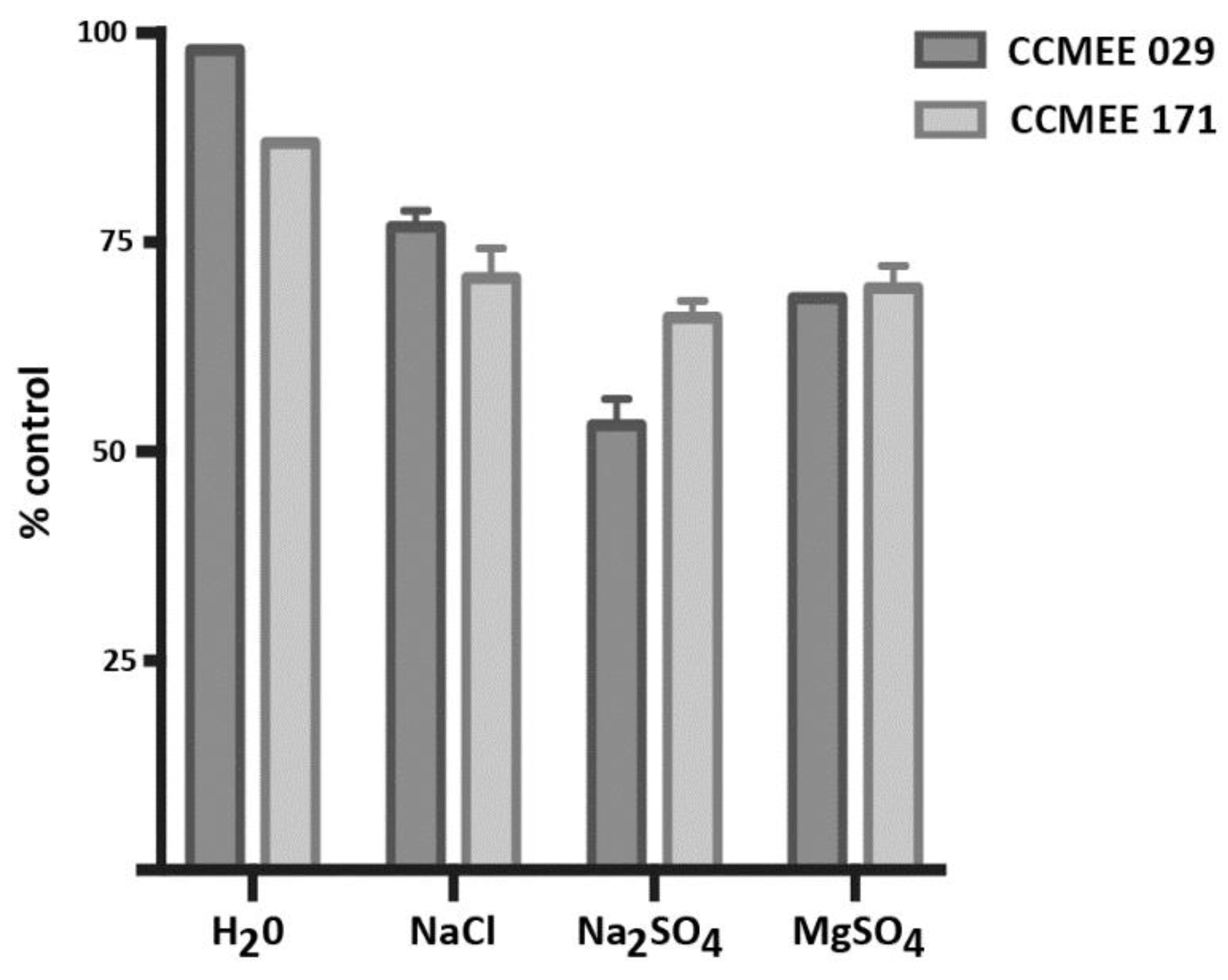