Ultradeep Microbial Communities at 4.4 km within Crystalline Bedrock: Implications for Habitability in a Planetary Context
Next Article in Special Issue

Survivability of Anhydrobiotic Cyanobacteria in Salty Ice: Implications for the Habitability of Icy Worlds
Previous Article in Special Issue

Nanosatellites for Biology in Space: In Situ Measurement of Bacillus subtilis Spore Germination and Growth after 6 Months in Low Earth Orbit on the O/OREOS Mission

We report here complete 6-month results from the orbiting Space Environment Survivability of Living Organisms (SESLO) experiment. The world’s first and only long-duration live-biology cubesat experiment, SESLO was executed by one of two 10-cm cube-format payloads aboard the 5.5-kg O/OREOS (Organism/Organic Exposure to Orbital Stresses) free-flying nanosatellite, which launched to a 72°-inclination, 650-km Earth orbit in 2010. The SESLO experiment measured the long-term survival, germination, metabolic, and growth responses of Bacillus subtilis spores exposed to microgravity and ionizing radiation including heavy-ion bombardment. A pair of radiation dosimeters (RadFETs, i.e., radiation-sensitive field-effect transistors) within the SESLO payload provided an in-situ dose rate estimate of 6–7.6 mGy/day throughout the mission. Microwells containing samples of dried spores of a wild-type B. subtilis strain and a radiation-sensitive mutant deficient in Non-Homologoous End Joining (NHEJ) were rehydrated after 14, 91, and 181 days in space with nutrient medium containing with the redox dye alamarBlue (aB), which changes color upon reaction with cellular metabolites. Three-color transmitted light intensity measurements of all microwells were telemetered to Earth within days of each 24-hour growth experiment. At 14 and 91 days, spaceflight samples germinated, grew, and metabolized significantly more slowly than matching ground-control samples, as measured both by aB reduction and optical density changes; these rate differences notwithstanding, the final optical density attained was the same in both flight and ground samples. After 181 days in space, spore germination and growth appeared hindered and abnormal. We attribute the differences not to an effect of the space environment per se, as both spaceflight and ground-control samples exhibited the same behavior, but to a pair of ~15-day thermal excursions, after the 91-day measurement and before the 181-day experiment, that peaked above 46 °C in the SESLO payload. Because the payload hardware operated nominally at 181 days, the growth issues point to heat damage, most likely to component(s) of the growth medium (RPMI 1640 containing aB) or to biocompatibility issues caused by heat-accelerated outgassing or leaching of harmful compounds from components of the SESLO hardware and electronics. View Full-Text
Keywords: astrobiology; Bacillus subtilis; cubesat; germination; Low Earth Orbit; microfluidics; nanosatellite; O/OREOS; SESLO; spores astrobiology; Bacillus subtilis; cubesat; germination; Low Earth Orbit; microfluidics; nanosatellite; O/OREOS; SESLO; spores
►▼ Show Figures 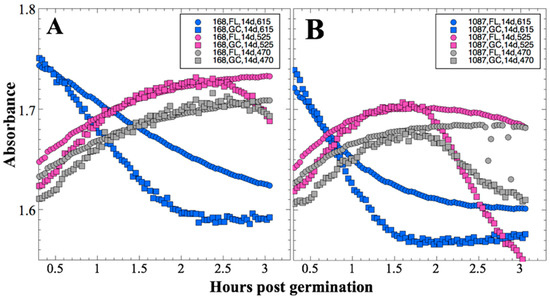