Fatty Liver, and Not Visceral Fat, Is More Associated with Liver Fibrosis and Diabetes in Non-Obese Japanese Individuals: A Cross-Sectional Study
Next Article in Special Issue

Function and Benefits of Natural Competence in Cyanobacteria: From Ecology to Targeted Manipulation
Previous Article in Journal

Pgr5 proteins play a major direct role in cyclic electron flow paths in plants and eukaryotic phytoplankton. The genomes of many cyanobacterial species code for Pgr5-like proteins but their function is still uncertain. Here, we present evidence that supports a link between the Synechocystis sp. PCC6803 Pgr5-like protein and the regulation of intracellular redox balance. The knockout strain, pgr5KO, did not display substantial phenotypic response under our experimental conditions, confirming results obtained in earlier studies. However, the overexpression strain, pgr5OE, accumulated 2.5-fold more chlorophyll than the wild type and displayed increased content of photosystems matching the chlorophyll increase. As a result, electron transfer rates through the photosynthetic apparatus of pgr5OE increased, as did the amount of energy stored as glycogen. While, under photoautotrophic conditions, this metabolic difference had only minor effects, under mixotrophic conditions, pgr5OE cultures collapsed. Interestingly, this specific phenotype of pgr5OE mutants displayed a tendency for reverting, and cultures which previously collapsed in the presence of glucose were now able to survive. DNA sequencing of a pgr5OE strain revealed a second site suppression mutation in slr1916, a putative esterase associated with redox regulation. The phenotype of the slr1916 knockout is very similar to that of the strain reported here and to that of the pmgA regulator knockout. These data demonstrate that, in Synechocystis 6803, there is strong selection against overexpression of the Pgr5-like protein. The pseudoreversion event in a gene involved in redox regulation suggests a connection of the Pgr5-like protein to this network. View Full-Text
Keywords: cyanobacteria; electron transport; photosynthesis; carbon metabolism; redox cyanobacteria; electron transport; photosynthesis; carbon metabolism; redox
►▼ Show Figures 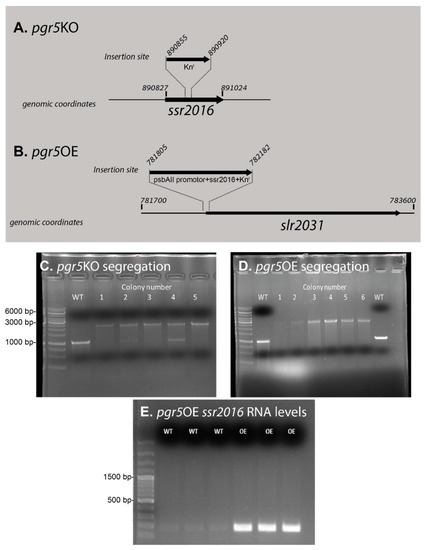