Defining Lyfe in the Universe: From Three Privileged Functions to Four Pillars
Previous Article in Journal

Two important ions, K+ and Na+, are unequally distributed across the contemporary phospholipid-based cell membrane because modern cells evolved a series of sophisticated protein channels and pumps to maintain ion gradients. The earliest life-like entities or protocells did not possess either ion-tight membranes or ion pumps, which would result in the equilibration of the intra-protocellular K+/Na+ ratio with that in the external environment. Here, we show that the most primitive protocell membranes composed of fatty acids, that were initially leaky, would eventually become less ion permeable as their membranes evolved towards having increasing phospholipid contents. Furthermore, these mixed fatty acid-phospholipid membranes selectively retain K+ but allow the passage of Na+ out of the cell. The K+/Na+ selectivity of these mixed fatty acid-phospholipid semipermeable membranes suggests that protocells at intermediate stages of evolution could have acquired electrochemical K+/Na+ ion gradients in the absence of any macromolecular transport machinery or pumps, thus potentially facilitating rudimentary protometabolism. View Full-Text
Keywords: membrane; prebiotic chemistry; K+/Na+ gradient; energy; origin of life membrane; prebiotic chemistry; K+/Na+ gradient; energy; origin of life
►▼ Show Figures 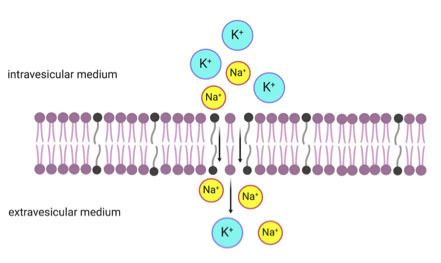