Physicochemical Foundations of Life that Direct Evolution: Chance and Natural Selection are not Evolutionary Driving Forces

The current framework of evolutionary theory postulates that evolution relies on random mutations generating a diversity of phenotypes on which natural selection acts. This framework was established using a top-down approach as it originated from Darwinism, which is based on observations made of complex multicellular organisms and, then, modified to fit a DNA-centric view. In this article, it is argued that based on a bottom-up approach starting from the physicochemical properties of nucleic and amino acid polymers, we should reject the facts that (i) natural selection plays a dominant role in evolution and (ii) the probability of mutations is independent of the generated phenotype. It is shown that the adaptation of a phenotype to an environment does not correspond to organism fitness, but rather corresponds to maintaining the genome stability and integrity. In a stable environment, the phenotype maintains the stability of its originating genome and both (genome and phenotype) are reproduced identically. In an unstable environment (i.e., corresponding to variations in physicochemical parameters above a physiological range), the phenotype no longer maintains the stability of its originating genome, but instead influences its variations. Indeed, environment- and cellular-dependent physicochemical parameters define the probability of mutations in terms of frequency, nature, and location in a genome. Evolution is non-deterministic because it relies on probabilistic physicochemical rules, and evolution is driven by a bidirectional interplay between genome and phenotype in which the phenotype ensures the stability of its originating genome in a cellular and environmental physicochemical parameter-depending manner. View Full-Text
Keywords: Evolution; Darwinism; biophysics; RNA; Origin of life Evolution; Darwinism; biophysics; RNA; Origin of life
►▼ Show Figures 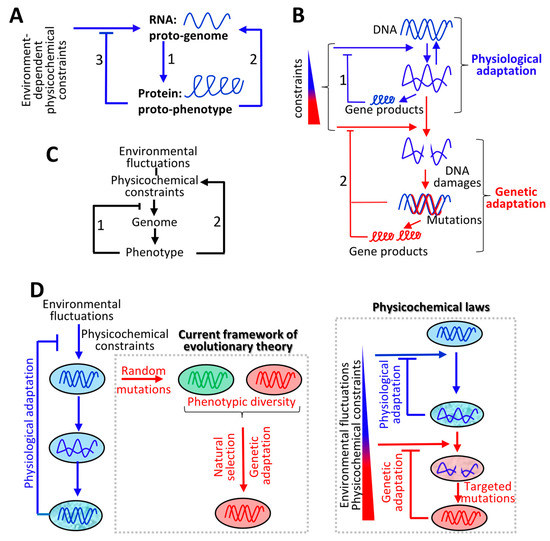