Crystallization of Jarosite with Variable Al3+ Content: The Transition to Alunite
Previous Article in Journal

In order to understand the crystal chemical properties of hydrous rare-earth (RE) phosphates, REPO4,hyd, that form at ambient temperature, we have synthesized REPO4,hyd through the interaction of aqueous RE elements (REEs) with aqueous P at room temperature at pH < 6, where the precipitation of RE hydroxides does not occur, and performed rigorous solid characterization. The second experiment was designed identically except for using hydroxyapatite (HAP) crystals as the P source at pH constrained by the dissolved P. Hydrated RE phosphate that precipitated at pH 3 after 3 days was classified into three groups: LREPO4,hyd (La → Gd) containing each REE from La-Gd, MREPO4,hyd (Tb → Ho), and HREPO4,hyd (Er → Lu). The latter two groups included increasing fractions of an amorphous component with increasing ionic radius, which was associated with non-coordinated water. REallPO4,hyd that contains all lanthanides except Pm transformed to rhabdophane structure over 30 days of aging. In the experiments using HAP, light REEs were preferentially distributed into nano-crystals, which can potentially constrain initial RE distributions in aqueous phase. Consequently, the mineralogical properties of hydrous RE phosphates forming at ambient temperature depend on the aging, the pH of the solution, and the average ionic radii of REE, similarly to the well-crystalline RE phosphates. View Full-Text
Keywords: rare earth elements; hydrated rare earth phosphate; apatite; nanoparticle; TEM rare earth elements; hydrated rare earth phosphate; apatite; nanoparticle; TEM
►▼ Show Figures 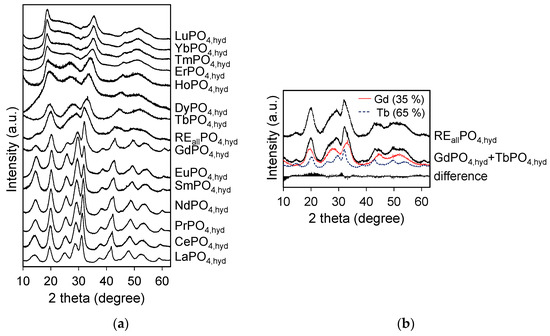