A Study on the Formation Environment of the La Cumbre Amber Deposit, from Santiago Province, the Northwestern Part of the Dominican Republic
Previous Article in Journal

The Cyclops Ophiolite as a Source of High-Cr Spinels from Marine Sediments on the Jayapura Regency Coast (New Guinea, Indonesia)

The first detailed mineralogy, geochemistry and origin of heavy minerals in marine sediments along the Jayapura Regency coast on the Indonesian part of New Guinea Island are reported as part of a larger set of investigations conducted since 2009. In these sediments, the following heavy minerals were identified: high-Al and high-Cr spinels, chromian andradite, Mg-olivine, magnetite, mixture of iron (III) oxyhydroxides (limonite) and minerals from serpentine-group minerals (lizardite, antigorite). The heavy mineral fraction of marine sediments contains increased concentrations of metals, including W (up to 257.72 ppm) and Ag (up to 1330.29 ppb) as well as minor amounts of Ni (7.1–3560.9 ppm) and Cr (68.0–5816.0 ppm). The present state of geological knowledge suggests that there are no known prospects for rich Ti, Ni, Co, Cr, Au deposits along the examined part of the Jayapura coast. However, the average content of Ag and W is high enough to provide an impulse for suggested further deposit research. The source of marine sediments is Cyclops ophiolite, which contains a typical ophiolite sequence. Cyclops Mountain rocks have undergone intense chemical weathering processes and the resulting eroded material has been deposited on the narrow continental shelf. The chemical composition of chromian spinels indicates that their source is depleted peridotites from the SSZ (supra-subduction zone) environment of the Cyclops ophiolite. A detailed geochemical examination indicates that the evolution of parental melt of these rocks evolved towards magma with geochemical parameters similar to mid-ocean ridge basalt (MORB). View Full-Text
Keywords: chromian spinels; cyclops ophiolite; chromian garnet; New Guinea Island; heavy minerals; placer deposits chromian spinels; cyclops ophiolite; chromian garnet; New Guinea Island; heavy minerals; placer deposits
►▼ Show Figures 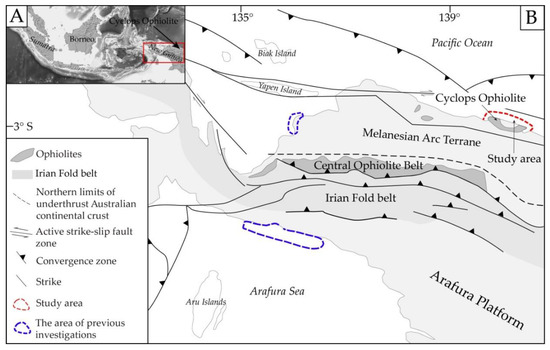