New Data on the Isomorphism in Eudialyte-Group Minerals. 2. Crystal-Chemical Mechanisms of Blocky Isomorphism at the Key Sites
Next Article in Special Issue

Post-Serpentinization Formation of Theophrastite-Zaratite by Heazlewoodite Desulfurization: An Implication for Shallow Behavior of Sulfur in a Subduction Complex
Previous Article in Journal

Formation of Natural Silicate Hydrates by the Interaction of Alkaline Seepage and Sediments Derived from Serpentinized Ultramafic Rocks at Narra, Palawan, the Philippines

In radioactive waste disposal facilities, low-permeability engineered barrier materials are important for inhibiting radionuclide migration. However, dissolution–precipitation reactions under alkaline conditions change the permeability of engineered barriers. To understand long-term dissolution–precipitation reactions under alkaline conditions in chemically complex systems, trenches and drill holes were excavated at Narra in Palawan, where alkaline fluids (pH > 11) have been naturally produced, seeping into clastic sediments derived from serpentinized ultramafic rocks and gabbro of Palawan ophiolite. Interaction between the alkaline seepage and clastic sediments, which have been deposited since 15,000 radiocarbon years before present (14C yr BP), led to dissolution of minerals and the precipitation of Si-bearing phases which were divided into two main categories: Fe-Mg-Si infillings and Ca-Si infillings. The former category was composed of iron-magnesium-silicate-hydrate (F-M-S-H) and a nontronite-like mineral and was widely recognized in the clastic sediments. The nontronite-like mineral likely formed by interaction between silicates and alkaline seepage mixed with infiltrated seawater, whereas F-M-S-H formed by the reaction of silicates with alkaline seepage in the absence of seawater infiltration. Ca-Si infillings included 14 Å tobermorite and were precipitated from alkaline seepage combined with the Ca and Si supplied by the dissolution of calcite and silicates in the clastic sediments. View Full-Text
Keywords: alkaline seepage; ophiolite; silicate hydrate; smectite; tobermorite alkaline seepage; ophiolite; silicate hydrate; smectite; tobermorite
►▼ Show Figures 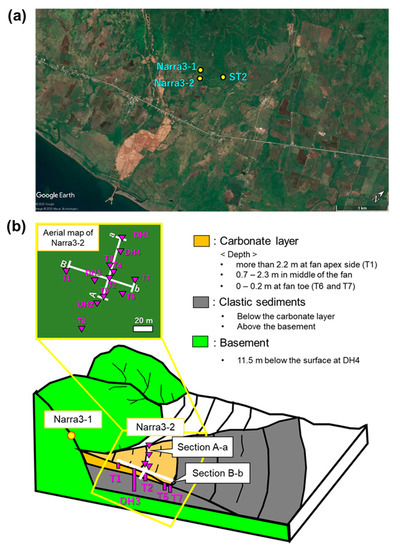