A government airborne geophysical survey flown in the late 1970s detected a large Magnetic anomaly at Gadarwara, Madhya Pradesh, in north-central India. Deep drilling indicates that the oval-shaped Magnetic anomaly is caused by underlying Magnetite-bearing banded iron formation belonging to the Mahakoshal Formation of Archean to Early Proterozoic age. The anomaly is hosted in a tectonic rift zone (Narmada-Son Lineament). After drilling alluvium up to 312 m thick, rocks intersected to depths of 612 m provided core samples for research. Broadly speaking, the samples contain banded hematite jaspilite (BHJ) and banded Magnetite (BM) iron formation with pervasive carbonate alterations. Three vertical diamond drill holes were drilled along a 1.4 km long N-S transect across the center of the geophysical anomaly. DDH-1, near the northern edge of the anomaly, went through 309 m of alluvium before intersecting bedrock and then cored 303 m of bedrock for a total depth of 612 m. Copper mineralization with appreciable amounts of cobalt, zinc, molybdenum, silver, rare earth elements, uranium and other elements was intersected. The litho-units are highly oxidised and intensely brecciated with hydrothermal overprinting of Na-K metasomatism alteration mineralogy. The second borehole, DDH-2 failed as the core drilling bit stuck in the alluvium and further drilling was abandoned, whereas the third borehole DDH-3 didnot intersect a Magnetite-hematite association and cored only siltstone. Two-dimensional model studies suggest that the signature of high Magnetic anomaly is at a depth of 0.4 km from the surface, with a width of 3.5 km, dipping at 45 in a northerly direction. The causative body has a Magnetic susceptibility of 0.0052 C.G.S. units, suggestive of a hematite with quartz veinlets lithology. Based on predictive Magnetic exploration models for Iron-Oxide-Copper-Gold (IOCG), such deposits can be inferred from geological observations combined with petrophysical data and forward modelling of the observed Magnetic signatures. This paper reports a prospective IOCG-like mineralization style hosted in a rift (Narmada-Son) type of tectonic environment. View Full-Text
Keywords: Gadarwara; central India; mineralization; IOCG; Narmada-Son-Lineament; Magnetic anomaly Gadarwara; central India; mineralization; IOCG; Narmada-Son-Lineament; Magnetic anomaly
►▼ Show Figures 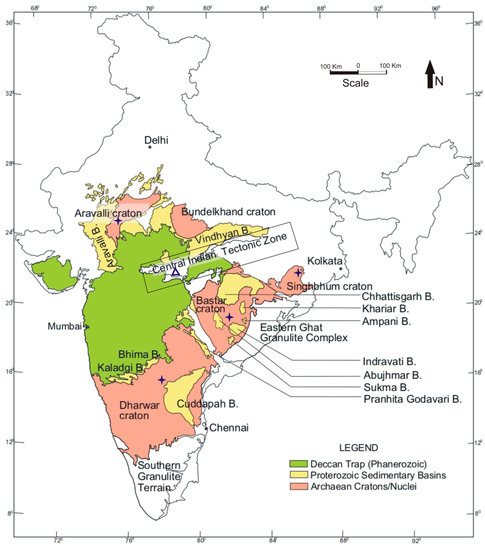