The Evolution of Pollutant Concentrations in a River Severely Affected by Acid Mine Drainage: Río Tinto (SW Spain)

The Río Tinto, located in the Iberian Pyrite Belt (SW Spain), constitutes an extreme case of pollution by acid mine drainage. Mining in the area dates back to the Copper Age, although large-scale mining of massive sulfide deposits did not start until the second half of the 19th century. Due to acidic mining discharges, the Río Tinto usually maintains a pH close to 2.5 and high concentrations of pollutants along its course. From a detailed sampling during the hydrological year 2017/18, it was observed that most pollutants followed a similar seasonal pattern, with maximum concentrations during autumn due to the washout of secondary soluble sulfate salts and minimum values during large flood events. Nevertheless, As and Pb showed different behavior, with delayed concentration peaks. The dissolved pollutant load throughout the monitored year reached 5000 tons of Fe, 2600 tons of Al, 680 tons of Zn, and so on. While most elements were transported almost exclusively in the dissolved phase, Fe, Pb, Cr, and, above all, As showed high values associated with particulate matter. River water quality data from 1969 to 2019 showed a sharp worsening in 2000, immediately after the mine closure. From 2001 on, an improvement was observed. View Full-Text
Keywords: sulfide mining; Iberian Pyrite Belt; rivers; pollutant load sulfide mining; Iberian Pyrite Belt; rivers; pollutant load
►▼ Show Figures 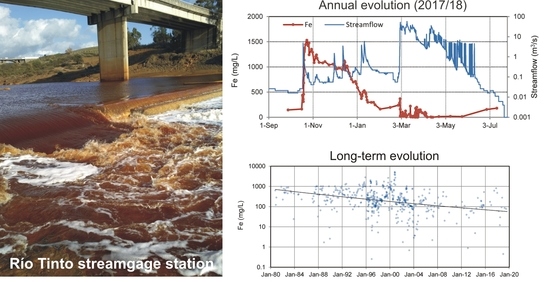