The Relationship between Surface Roughness, Capillarity and Mineral Composition in Roofing Slates

Roofing slates are a category of building stones which have a very distinctive feature: High fissility, which allows them to be split into tiles that are thin, regular and large. There are several types of roofing slates, depending on their lithology. The four main lithologies are low-grade slates, slates stricto sensu, phyllites, and mica-schist. Occasionally, other rocks such as quartzites, serpentinites, or shales, can also be used as roofing slates. Roofing slates must ensure waterproofing, a quality that depends on both the rock and the installation. Installation must therefore take into account parameters such as the pitch, orientation, and overlap of the tiles in order to avoid capillarity, which could jeopardize waterproofing. These parameters are usually included in installation manuals. However, despite the fact that roughness is a parameter known to have an important effect on capillarity, it has never been thoroughly analyzed. Roughness varies depending on the type of roofing slate, but installation manuals do not take this factor into account. This study has measured surface roughness in different types of roofing slates using a laser scanner and determined the capillarity values along and across the grain direction. Furthermore, the role of dissolved salts in capillarity has likewise been studied.
Keywords: roofing slate; capillarity; salts; roof installation; surface roughness roofing slate; capillarity; salts; roof installation; surface roughness

Sixteen types of roofing slates were selected for this study (Table 1). Samples were chosen to cover the range of different surfaces and textures found on the market. However, not all varieties have the same representation on the market. As can be seen in Table 1, there are certain samples (05 and RIM) which were selected based on their particular surface features, despite being unavailable on today’s market. Sample 05 is a unique slate shingle with a very marked lineation, not really suitable for roofing, while RIM belongs to the exhausted outcrop of Rimognes, in France, and is also a type of roofing slate unique, due to the occurrence of magnetite crystals on its surface. Some samples clearly show the lineation, while other not. For these last samples, we have assumed that they have been manufactured with the lineation parallel to the length of the shingle, as it should be to obtain the best mechanical resistance. In most of the cases, the samples were obtained directly at the quarry. Each sample consisted of two shingles with similar dimensions.
Surface roughness was determined using a Leica DCM 3D confocal microscope. A 41 by 40 mm2 rectangular area of each roofing slate was scanned using a 5× objective magnification. This area was obtained by stitching together 520 single confocal measures, with 15% overlap. The data obtained by confocal microscope was post-processed using a data processing software (Matlab©) (v. R2020a, The MathWorks Inc., Natick, MA, USA) to determine the surface roughness parameters: Arithmetic height (Sa), root mean square (Sq), skewness (Ssk), and kurtosis (Sku), according to the ISO 25178-2 standard [23]. Sa gives an overview of the surface roughness, the higher the value the rougher the surface. The other parameters give information about the distribution and shape of this roughness.
Capillarity was measured by joining together two samples from each roofing slate variety using elastic bands, and immersing them in distilled water, in a NaCl solution, and in a Na2SO4 solution, for 24 h at room temperature. The concentration of the saline solutions was 3.5% for NaCl (the average content in sea water) and 14% for Na2SO4 (as in EN 12370 Natural Stone Methods. Determination of resistance to salt crystallization, [24]). At this temperature, and for the given concentrations, NaCl has a viscosity of 0.950 mPa·s and a density of 1.023 g∙cm−3, while for Na2SO4 the values are 1.545 mPa·s and 1.055 g∙cm−3. These are the two most commonly found salts in natural environments, and are responsible for most rock weathering caused by salt crystallization, including slate slab deterioration [25]. Capillary ascension was measured in two directions: Parallel and perpendicular to lineation. Likewise, the average and maximum values were also measured. For some the samples, the lineation was clearly visible, but for others this was less obvious. Nevertheless, we know that the length of the shingles coincides with the lineation, so in doubtful samples, we took length as lineation. The average and maximum capillary ascension was measured for each sample, placing them at 90° with respect to the bottom of the tray. As pointed out before, pitch angle should be higher than 20° (16.7° for the Spanish standard). The capillary ascension values obtained with this 90° angle can be converted to other angles using a basic trigonometric conversion (Figure 4), were H (capillary) = c (water ascension) for 90°. Pitch angle is decided when calculating the roof, taking into account both aesthetics and functional design. This paper provides capillary ascension values for 90°. However, values for other pitches can be determined by applying the formula in Figure 4, using the values found in this paper for 90°.
Mineral determination and semi-quantification were conducted at the University of Oviedo’s Scientific Services Department, using a Philips PW 1830 diffractometer, with a Cu cathode and a wavelength of Κα = 1.5405 Å. The angular scan was recorded from 2° to 60° 2θ. Semiquantification of the mineral phases was performed using the software XPowder (v. 2004.04.44 PRO, Universidad de Granada, Spain), using the Rietveld method, which has shown great accuracy in roofing slates [26]. Finally, in order to check for possible relationships between the measured parameters, a correlation matrix was built with the values of the average capillarity, mineral composition, and roughness, using the statistics suite SPSS v 15.0 for Microsoft Windows©.

The mineral composition (Table 2) was as expected for this type of rocks: The main minerals were quartz, chlorites, and mica, occasionally with some accessories such as pyrite and carbonates. Since roofing slates come from the metamorphism of pelitic sediments, the mineral composition is rather similar, regardless of age or location. Sample SPT has a different mineral composition, since this rock is a serpentinite, hence a rock with a rather different metamorphic history.
The study of surface roughness revealed that most of the samples presented Sa values below 150 (Table 2). Only four samples had values above 150 µm: 01, 05, ALT, and SPT. The first two are slates s.s. 01 has a very rough and flaky texture which conceals the lineation, while 05 is one of the exceptional samples chosen based on its texture, in this case with a very strong lineation that even causes the shingle to bend. ALT and SPT are roofing stones, ALT presents a significantly smaller number of phyllosilicates and more hard minerals (quartz and feldspar) than roofing slates, while SPT is wholly composed by phyllosilicates. Figure 5 shows a macro image and the confocal scanned topography of some of the samples, using the same z-axis limits (color scale). Samples with the greatest Sa presented different topographical properties.
The skewness analysis (Figure 6A) indicated that samples 05, BRA, and WAM had significantly negative values, which indicates that roughness values are caused mainly by valleys on the surface (negative z values). On the other hand, samples PEN and 03 exhibited significantly positive Ssk values, indicating the presence of crests (positive z values) on the surface. Kurtosis (Figure 6B) showed that slate 05 exhibited a sharp topography (Sku > 3), related to the sample’s pronounced lineation, while sample ALT had a smooth surface (Sku < 3). The granulated surface of sample ALT resulted in a homogeneous height distribution of peaks and valleys, and as a result, Sku ≈ 2.
On the other hand, the results for capillarity (Figure 7, Table 2) have shown that the capillary values of the direction parallel to lineation are lower than those perpendicular to lineation for all three solutions. Distilled water exhibits higher values (an average of 4.5 cm parallel to lineation and 5.0 cm perpendicular to lineation), while Na2SO4 and NaCl have averages of 3.8 and 4.3 cm parallel to lineation, and 4.8 and 4.6 cm perpendicular to lineation, respectively. These results confirm the importance of manufacturing roofing slates with the length parallel to lineation, not only to achieve the optimum mechanical performance but also to minimize capillarity.
The correlation analysis (Table 3) between the parameters measured (capillarity, roughness, and mineral composition) detected the highest correlations between roughness and capillarity for saline solutions. Another set of correlations was also found between quartz/chlorites and capillarity, although the values are barely significant. Kurtosis and Skewness have not presented significant correlations with capillarity for any of the solutions in both directions. Regarding lithotype, with the increase of metamorphism, roofing slates usually tend to develop a visible lineation, which affects the surface roughness. Then, capillary values parallel to lineation are rather similar for all the samples, but capillarity perpendicular to lineation are higher for the samples with higher metamorphic degree (Figure 7).

The standard procedure for manufacturing roofing slate tiles using the lineation as the length of the shingle, has proven to be important not just in terms of achieving optimal mechanical resistance, but also for diminishing capillarity. Our results show that capillarity is always lower in the direction parallel to lineation, between 90% and 80% of the value in the direction perpendicular to lineation.
Roughness is positively correlated with capillarity, especially for saline solutions in the direction parallel to lineation (0.766 for NaCl and 0.743 for Na2SO4, values for Pearson correlation coefficient). This means that for environments where saline sprays occur, rougher roofing slate surfaces have a greater risk of capillarity.
The mineral percentage of quartz has a slightly positive correlation with distilled water capillarity, while the percentage of chlorites exhibits a slightly negative correlation with salt capillarity. On the other hand, quartz and chlorites have no correlation at all with roughness. Roughness seems to be the result of tectonic lineation rather than mineral composition.

Víctor Cárdenes is grateful to his grant PA-18-ACB17-11, from the Program Marie-Curie COFUND funded by the European Union, Government of Asturias (Spain) and the Spanish FICYT. 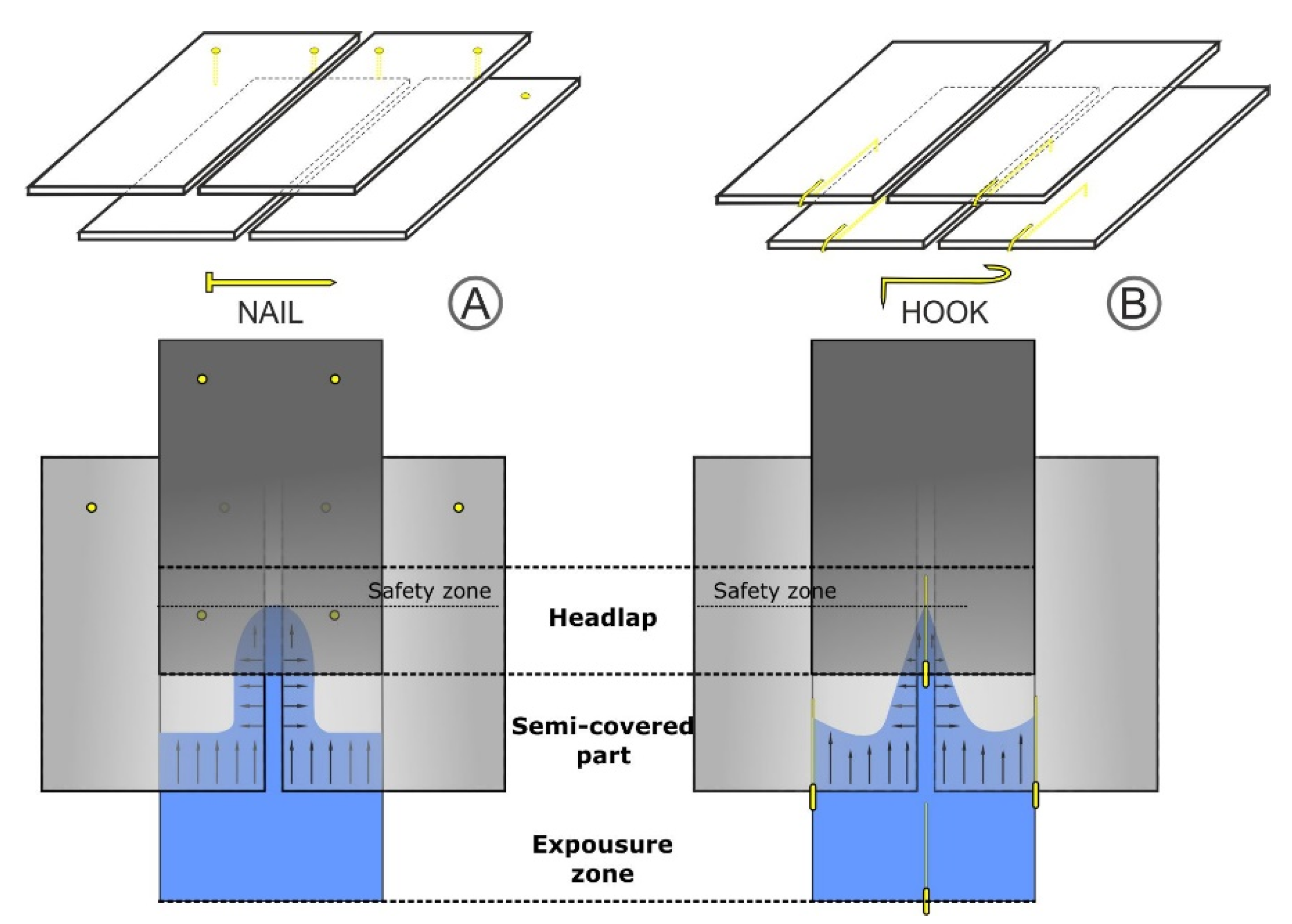 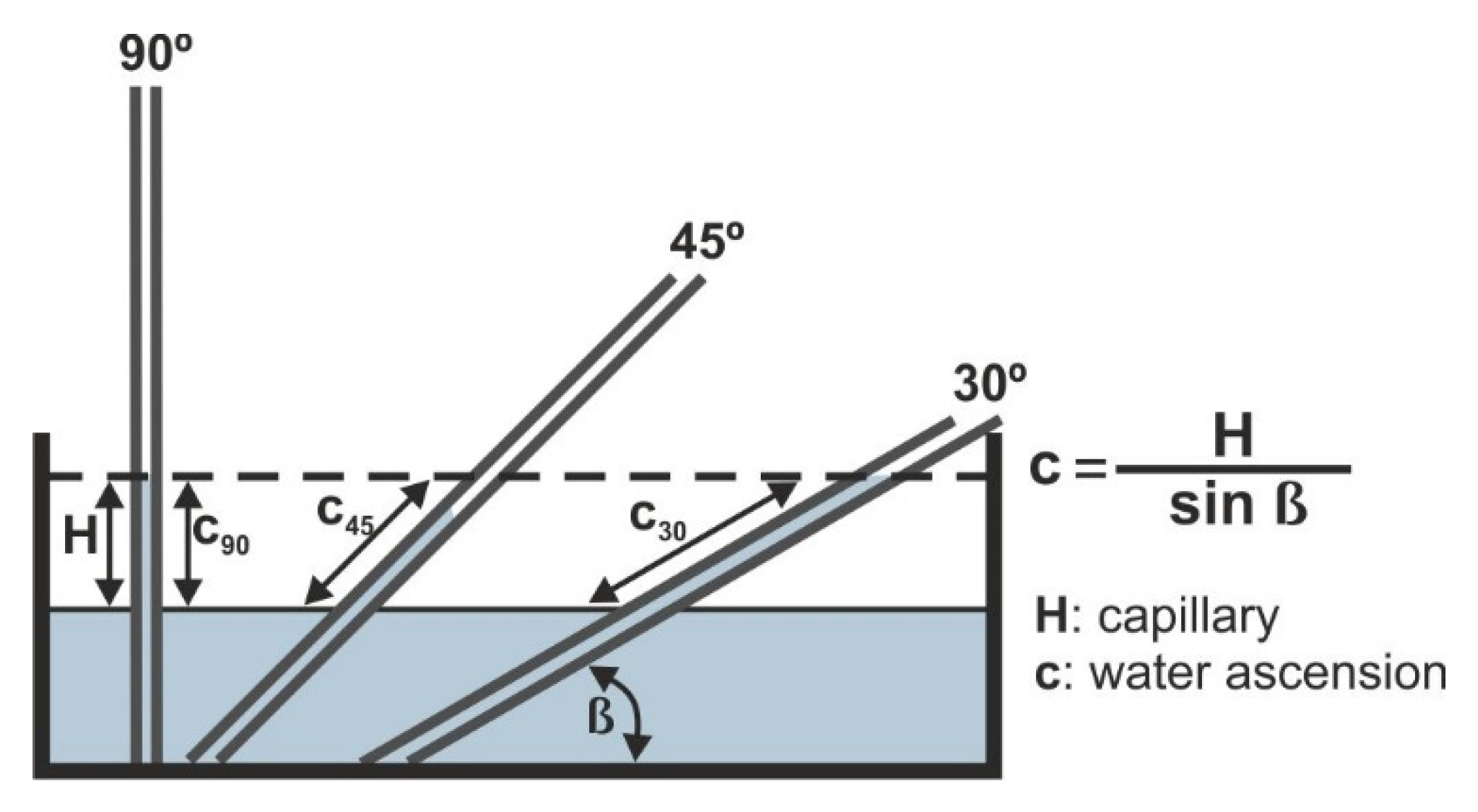 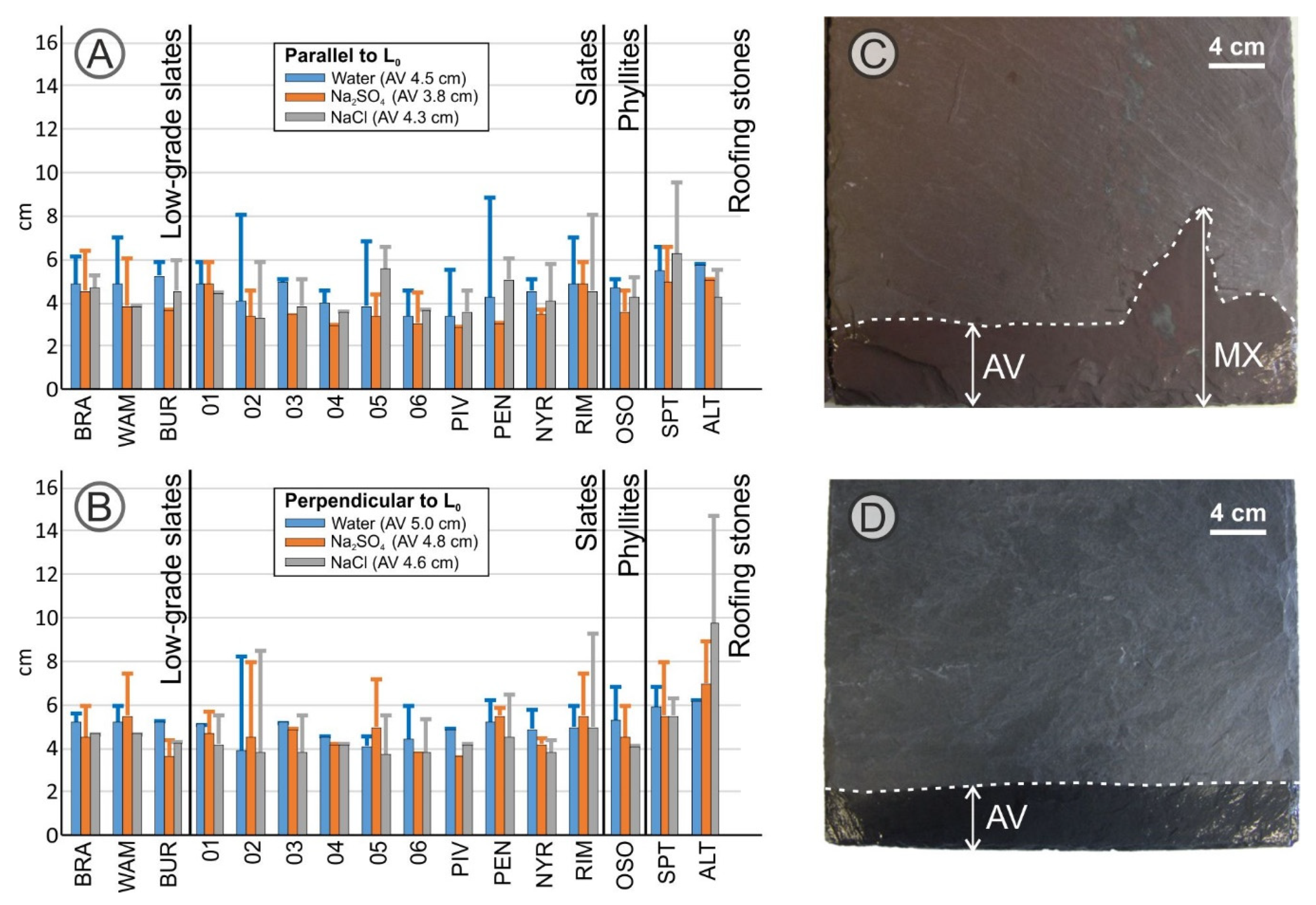