Bridging the Gaps: Bole and Terra Sigillata as Artefacts, as Simples and as Antibacterial Clays

Medicinal earths are an important and yet, so far, little scientifically explored archaeological resource. They are almost always identified by their source locality. Our work over the last few years has focused on their chemical and mineralogical characterization and their testing as anti-bacterials. This paper presents the results of the mineralogical analysis and antibacterial testing of six medicinal earths, bole or Terra Sigillata (stamped earth) of unknown date and provenance in the Pharmacy Museum of the University of Basel. Only one of them, a red (Armenian?) ‘bole’, was found to be antibacterial against both Gram-positive and Gram-negative bacteria. A yellow powder of Terra Tripolitania was mildly antibacterial and against one pathogen only. We argue that medicinal earths are in a pivotal place to bridge the gap between currently dispersed pieces of information. This information relates to: (a) their nature, attributes, and applications as described in the texts of different periods, (b) the source of their clays and how best to locate them in the field today, and (c) the methods employed for their beneficiation, if known. We propose that work should be focused primarily onto those medicinal earths whose clay sources can be re-discovered, sampled and assessed. From then on, a parallel investigation should be initiated involving both earths and their natural clays (mineralogy at bulk and nano-sized levels, bio-geochemistry, microbiological testing). We argue that the combined study can shed light into the parameters driving antibacterial action in clays and assist in the elucidation of the mechanisms involved.
Keywords: Armenian bole; Terra Sigillata; antibacterial clays; Lemnian Earth; Terra Tripolitania; medicinal earths Armenian bole; Terra Sigillata; antibacterial clays; Lemnian Earth; Terra Tripolitania; medicinal earths

The mineralogical composition of all samples was determined with X-ray diffraction (XRD), at the School of Mineral Resources Engineering, Technical University of Crete (Chania, Greece), on a Bruker D8 Advance Diffractometer equipped with a Lynx Eye strip silicon detector, 0.6° divergence and receiving slits, using Ni-filtered CuKα radiation (35 kV, 35 mA). Data were collected in the 2θ range 3–70° 2θ with a step size of 0.02° and counting time 1 s per strip step (total time 63.6 s per step). The XRD traces were analyzed and interpreted with the Diffrac Plus 13 software package from Bruker, Germany, and the Powder Diffraction Files (PDF). The quantitative analysis was performed on random powder samples (side loading mounting) by the Rietveld method using the BMGN code (Autoquan© software package version 2.8, Seifert GmbH & Co, Ahrensburg, Germany). About 1 g of finely ground sample <10 μm in size was used for the analyses.

The bacterial strains used in this study were representative Gram-positive and Gram-negative indicators, which are usually employed for the assessment of antimicrobial properties of various materials. Specifically, Staphylococcus aureus NCTC 12493 (Gram-positive) and Pseudomonas aeruginosa NCTC 10662 (Gram-negative) were chosen for the evaluation of the samples’ bioactivity. Both bacteria were cultured on LB agar (Lab M-Neogen Culture Media) and LB broth (Lab M-Neogen Culture Media) and the desired bacterial concentration in each experiment was adjusted photometrically based on the McFarland scale. Those bacterial species were selected because of their relation to public health issues, as carriers of diseases, and their use as valuable bacterial indicators.

Aqueous leachates of the samples were prepared, so as to assess any generated bioactivity. Samples were mixed with deionized water and ultrasonication was performed for 30 min at 25 °C (Julabo ultrasonic bath) followed by centrifugation at 10,000 g for 15 min for solids’ removal. The leachate was sterilized in the autoclave (20 min, 120 °C) and was stored for further antimicrobial testing.
Bioactivity of all samples was studied using the broth microdilution method and estimating the Minimum Inhibitory Concentration (MIC). MICs were measured labelling 96-well sterile microtiter trays with dilutions of each sample. The tested concentrations of the samples were in the range of 200–1.6 mg/mL and the bacterial density in each case was 105 CFU/mL. Microtiter trays were incubated at 37 °C for 18–24 h, followed by optical density measurement at 630 nm, using a microplate reader (Labtech LT-4000 Plate Reader) and Manta LML software provided by LabTech International for LabTech LT-4000 Plate Reader, Uckfield, UK.

With the exception of sample 01277, the earths have comparable mineralogical composition consisting mainly of clay minerals, mostly kaolinite and quartz, minor illite and trace K-feldspar, plagioclase and anatase (Table 1). In addition, samples 01405 and 01629-1 contain minor goethite and hematite which explain their red/brown color (Figure 1a,f). The presence of hematite and goethite explains the slightly elevated background of 01405 and 01629-1 compared to the remaining samples. The background was modeled adequately during analysis and did not affect quantitative analysis (see Figure S1). 01405 contains also trace chlorite. Sample 01627 has slightly different clay mineralogy as it contains also abundant illite in roughly equal proportions as kaolinite as well as trace siderite and sulfate minerals, namely alunite and anhydrite. Sample 01277, the powder of Terra Tripolitania, has a distinct mineralogy as it consists of dolomite, calcite, and quartz with minor kaolinite and illite and trace K-feldspar plagioclase and jarosite.

The bioactivity of the samples was tested using their leachates and estimating their MIC against two representative bacterial indicators, namely, P. aeruginosa and S. aureus. Based on the respective tests performed for the activity of antibiotics, we assessed the inhibitory concentration of the samples that was sufficient for the reduction of 60% of the concentration of the population of each strain (MIC60). The derived results are shown in Table 2, according to which the majority of the samples did not exhibit any substantial antimicrobial activity. Samples 01406, 01629-1 and 01629-2 achieved low levels of bacterial reduction and only their high concentration (200 mg/mL) led to bacterial inactivation up to approximately 40% of the bacterial initial load. This result is referred mainly to S. aureus, which proved to be slightly more sensitive under the current experimental conditions, despite the fact that it is a Gram-positive bacterium, and therefore more resistant to environmental stressed conditions. This negligible superiority of the Gram-negative P. aeruginosa could be attributed to a certain interaction, possibly a chemical one, between the samples’ components and the Gram-positive bacterial strain (S. aureus). For following the bacterial reduction (in %) as a function of concentration for each sample see Figure S2).
Sample 01627 resulted in negligible bacterial reduction, while the only sample with considerable activity was 01405, since (a) it was active even at low concentrations (e.g., 12.5 mg/mL) and (b) it had similar behavior towards both bacterial species. The level of bacterial inactivation was increased when higher concentrations of the sample were used, and complete bacterial decay was achieved when the sample concentration was 200 mg/mL. Sample 01277 was mildly antibacterial against S. aureus only (100 mg/mL).

The amount of DNA material extracted from sample materials was below detection (0.6 ng/g-material), with absorbances at 260 nm and 280 nm < 0.001. Although values fell below the range for quantification, PCR amplifications were still attempted. Unfortunately, none of the assays for bacterial, fungal, or chloroplast DNA revealed any detectable signals greater than analytical backgrounds. As such, none was detected in the samples. This may suggest that the samples had no exposure to any biological agents, but it remains a possibility that DNA and/or naturally organic matter have degraded.

The following are available online at https://www.mdpi.com/2075-163X/10/4/348/s1, Figure S1: XRD traces of samples 01277 and 01405. Sample 01405 has elevated background due to the presence of hematite and goethite. Figure S2: Reduction of bacterial population of S. aureus (Gram-positive) and P. aeruginosa (Gram-negative) after incubation with the tested samples.

Funding has been provided by Wellcome Trust (Seed Award in the Humanities and Social Sciences (201676/Z/16/Z). Principal investigator: E. Photos-Jones.

The authors are indebted to Corinne Eichenberger and the director and Trustees of the Pharmacy Museum of the University of Basel for making the archaeological samples available for analysis. Also to Ianto Jocks of the University of Glasgow for information regarding the Swiss pharmacopoeia. The authors would like to thank the three anonymous reviewers for their pertinent comments and constructive criticisms. 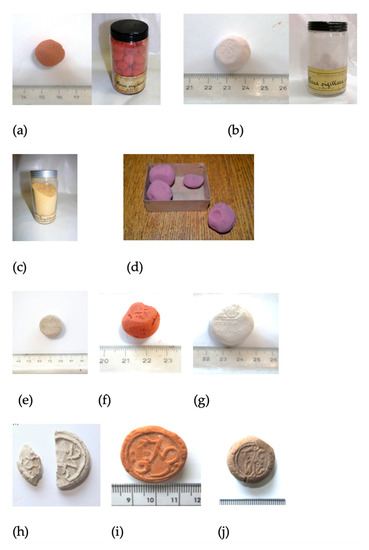