Bridging the Gaps: Bole and Terra Sigillata as Artefacts, as Simples and as Antibacterial Clays
Next Article in Special Issue

Genesis and Evolution of Ferromanganese Crusts from the Summit of Rio Grande Rise, Southwest Atlantic Ocean

The Rio Grande Rise (RGR) is a large elevation in the Atlantic Ocean and known to host potential mineral resources of ferromanganese crusts (Fe–Mn), but no investigation into their general characteristics have been made in detail. Here, we investigate the chemical and mineralogical composition, growth rates and ages of initiation, and phosphatization of relatively shallow-water (650–825 m) Fe–Mn crusts dredged from the summit of RGR by using computed tomography, X-ray diffraction, 87Sr/86Sr ratios, U–Th isotopes, and various analytical techniques to determine their chemical composition. Fe–Mn crusts from RGR have two distinct generations. The older one has an estimated age of initiation around 48–55 Ma and was extensively affected by post-depositional processes under suboxic conditions resulting in phosphatization during the Miocene (from 20 to 6.8 Ma). As a result, the older generation shows characteristics of diagenetic Fe–Mn deposits, such as low Fe/Mn ratios (mean 0.52), high Mn, Ni, and Li contents and the presence of a 10 Å phyllomanganate, combined with the highest P content among crusts (up to 7.7 wt %). The younger generation is typical of hydrogenetic crusts formed under oxic conditions, with a mean Fe/Mn ratio of 0.75 and mean Co content of 0.66 wt %, and has the highest mean contents of Bi, Nb, Ni, Te, Rh, Ru, and Pt among crusts formed elsewhere. The regeneration of nutrients from local biological productivity in the water column is the main source of metals to crusts, providing mainly metals that regenerate rapidly in the water column and are made available at relatively shallow water depths (Ni, As, V, and Cd), at the expense of metals of slower regeneration (Si and Cu). Additionally, important contributions of nutrients may derive from various water masses, especially the South Atlantic Mode Water and Antarctic Intermediate Water (AAIW). Bulk Fe–Mn crusts from the summit of RGR plateau are generally depleted in metals considered of greatest economic interest in crusts like Co, REE, Mo, Te, and Zr, but are the most enriched in the critical metals Ni and Li compared to other crusts. Further investigations are warranted on Fe–Mn crusts from deeper-water depths along the RGR plateau and surrounding areas, which would less likely be affected by phosphatization. View Full-Text
Keywords: ferromanganese crusts; phosphatization; Rio Grande Rise; critical metals ferromanganese crusts; phosphatization; Rio Grande Rise; critical metals
►▼ Show Figures 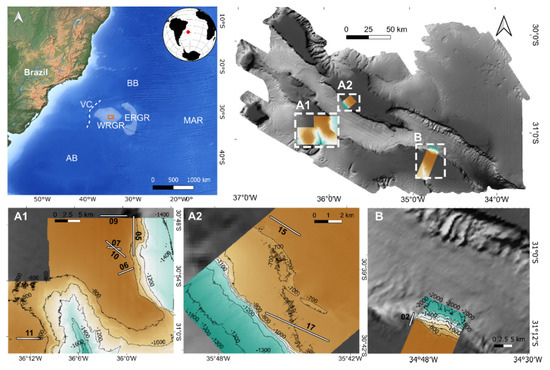