The Norilsk ore region is characterized by the occurrence of numerous intrusions comprising the PGE–Cu–Ni deposits. The Turumakit area, within the Southern Norilsk Trough, also contains many mineralized mafic intrusions of probably similar economic potential to the known Norilsk deposits. We study igneous rocks from three boreholes within the Turumakit area, sampling gabbro-dolerites and trachydolerites related to the Norilsk and Ergalakh complexes, as well as an outcrop of the Daldykan gabbro-dolerite intrusion. Our petrographical, mineralogical and geochemical data, as well as the U–Pb dating of extracted baddeleyites and zircons, primarily discriminate between the sub-alkaline rocks of the main Turumakit area and the Ergalakh trachydolerites located in the Norilsk and Talnakh ore junctions. Coarser grained Turumakit trachydolerites (with pegmatite segregations) contrast finer grained Ergalakh trachydolerites by having: (1) higher TiO2 (up to 5.5 wt %) compared with 2.2 wt %–3.3 wt % in the typical Ergalakh rocks; (2) low U, lower La/Yb and La/Sm ratios (5–7), in contrast to 8–10 ppm, 2.5–2.6 and 3.0–3.3, respectively, for the Ergalakh trachydolerites; and (3) their age was determined by U–Pb methods on baddeleyite and zircon (244.8 ± 2.7 Ma), and it appears likely that the mafic rocks traditionally attributed to the Ergalakh complex within the Turumakit area are younger than the Norilsk intrusions (250 ± 1.4 Ma). These data strongly indicate an emplacement of Turumakit intrusions during the end of a ~5 Myr magmatic evolution of the Norilsk district. It is therefore proposed that the sub-alkaline rocks of the Turumakit area belong to a separate intrusive complex within the Norilsk district. View Full-Text
Keywords: Norilsk area; Siberian traps; sub-alkaline and mafic intrusions; U–Pb baddeleyite ages Norilsk area; Siberian traps; sub-alkaline and mafic intrusions; U–Pb baddeleyite ages
►▼ Show Figures 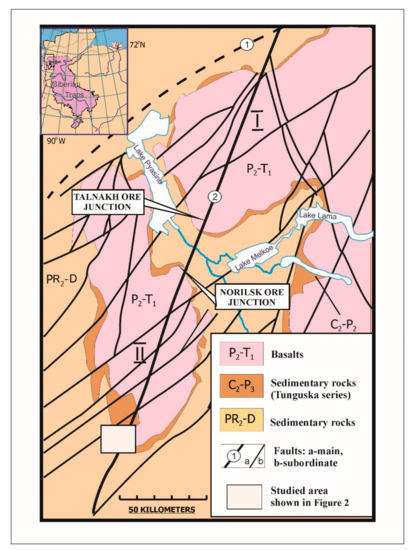