Quality function deployment (QFD) is a widely used quality system tool for translating customer requirements (CRs) into the engineering design requirements (DRs) of products or services. The conventional QFD analysis, however, has been criticized as having some limitations such as in the assessment of relationships between CRs and DRs, the determination of CR weights and the prioritization of DRs. This paper aims to develop a new hybrid group decision-making model based on hesitant 2-tuple linguistic term sets and an extended QUALIFLEX (qualitative flexible multiple criteria method) approach for handling QFD problems with incomplete weight information. First, hesitant linguistic term sets are combined with interval 2-tuple linguistic variables to express various uncertainties in the assessment information of QFD team members. Borrowing the idea of grey relational analysis (GRA), a multiple objective optimization model is constructed to determine the relative weights of CRs. Then, an extended QUALIFLEX approach with an inclusion comparison method is suggested to determine the ranking of the DRs identified in QFD. Finally, an analysis of a market segment selection problem is conducted to demonstrate and validate the proposed QFD approach. View Full-Text
Keywords: quality function deployment; hesitant 2-tuples; QUALIFLEX approach; multiple criteria decision-making quality function deployment; hesitant 2-tuples; QUALIFLEX approach; multiple criteria decision-making
►▼ Show Figures 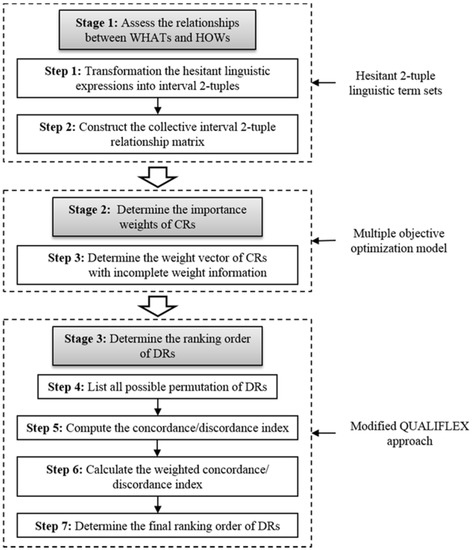