Soft-Theorems for Scalar Particles: The Dilatons Story
Next Article in Special Issue

:
In the present work, a single-crystalline epitaxial nonpolar a-plane AlN film with in-plane two-folder symmetries was successfully achieved on an r-plane sapphire substrate, by combining physical vapor deposition and a high-temperature annealing technique. Moreover, by varying the AlN thickness, the evolution of crystalline quality and structure were systematically investigated using X-ray diffraction, Raman spectroscopy, and atomic force microscopy. The crystalline quality was much improved by the annealing treatment. Most importantly, when the thickness of AlN was increased up to 1000 nm, the AlN lattice was found to endure strong distortion along the out-of-plane direction, and the lattice showed an obvious expansion. The change of the surface morphology induced by high-temperature annealing was also tracked, and the morphology displayed structural anisotropy along the direction. Our results act as a crucial platform to better understand and employ the nonpolar AlN template; in particular, it is of importance for subsequent device fabrication.
Keywords:
nonpolar; a-plane AlN; r-plane sapphire

In the past decades, the development of GaN based light-emitting diode (LED) and laser devices has thoroughly revolutionized human luminescence history [1,2,3,4,5]. However, several intrinsic properties, of both material and physics aspects, still act as disadvantages to block their further develop. One of the significant reasons is the strong polarization induced by the quantum confined stark effect (QCSE), which causes the deviation of carrier wave function along the c-axis [6,7]: the spontaneous polarization along the [0001] direction in a conventional LED sets up an electric field that undesirably impedes the carrier recombination in the quantum well region [6,7,8]. In particular, such a phenomenon gradually dominates upon increasing the c-axis polarization contribution, e.g., it is obviously enhanced when aluminum concentration is increased in an AlGaN compound [9,10,11]. This is detrimental to luminance devices with a high Al concentration, e.g., an LED or laser in the ultraviolet-C region (UVC band, wavelength < 280 nm) [10]. Moreover, in UVC–LED devices, such intensive polarization results in high TM luminance mode, which transfers a large part of emissions from the plane to edge region; thus, this again reduces the emission of the device [12,13]. It is worth noting that, under the above-mentioned influences, the UVC–LEDs normally exhibit a wall plug efficiency (WPE) less than 10%, which is far from the value of a GaN based blue-LED [11,14]. Therefore, exploring a strategy to reduce the polarization field is of great interest, to further develop UVC luminance devices.
In fact, utilizing the non-polar or semi-polar face of a nitride semiconductor has been proven effective to improve the performance of luminance devices in the visible band, through avoiding the polarization field. For instance, Nakamura’s group reported excellent lighting efficiency by employing a semipolar and InGaN/GaN LED [15,16]; a green LED on a free-standing GaN template also presented the advantages of high power and high efficiency [17]. Therefore, it is expected that the strategy of a non-polar or semi-polar sapphire substrate will be introduced into UVC–LEDs, due to the UVC-transparent characteristics of sapphire substrates, and plenty of studies have been carried out into the preparation of various types of non-polar AlN templates on sapphire substrates [18,19,20,21,22,23,24]. Recently, the technique of high temperature annealing has become attractive, due to its success in improving c-plane AlN template quality and the corresponding UVC–LEDs [25,26,27]; thus, it makes senses that such a strategy is employed in the preparation of a non-polar AlN template.
In the present work, by fully combining physical vapor deposition and a high temperature annealing technique, we successfully achieve a single-crystalline non-polarized a-plane AlN on a semi-polarized r-plane sapphire substrate. According to systematic investigations on crystalline structure, a two-folder structural symmetry was created in the as-sputtered a-plane AlN on an r-plane sapphire substrate. Moreover, the high temperature annealing operation greatly improved the crystalline quality and reset the strain statues in the as-sputtered samples. In particular, upon increasing AlN thickness, a crystalline distortion along the out-of-plane direction was found to present a strain evolution. As a result, our results act as a solid and meaningful example for lateral research on non-polar nitride semiconductors based LEDs, by fully employing the structural symmetry of a nitride semiconductor.

The AlN templates were prepared on r-plane sapphires by physical vapor deposition (PVD). The aluminum (purity ~ 99.999%) was the target, and the sputtering ambience was a mixture of argon and nitrogen, at a ratio of 1:4. The sputtered AlN was 500 nm, by calibrating the growth speed, and the sputtering power and temperature were 3000 W and 500 °C, respectively. Afterwards, the as-grown AlN templates were annealed in a tube furnace at 1700 °C for 5 h, and the annealing ambience was nitrogen.

Atomic force microscopy (AFM, Veeco Dimension TM 3100) with a typing mode was used to explore the surface morphology of all AlN samples.

In summary, through combing physics vapor deposition and a high-temperature annealing technique, we successfully prepared an in-plane two-folder symmetric epitaxial nonpolar a-plane AlN on a semipolar r-plane sapphire substrate. The high-temperature annealing intensively reordered the lattice; therefore, improving the crystalline quality of the as-sputtered AlN film. According to systematic studies by XRD, Raman, and AFM, the post-annealed lattice can endure expansion upon gradually increasing the AlN thickness. In particular, it was found that a large thickness of around 1000 nm leads to adverse stretching along the out-of-plane direction, according to the XRD results. When compared with other conventional template materials, e.g., c-AlN, which exhibits intensive polarization along the out-of-plane direction, the specific in-plane two-fold symmetric structure confirms the successful preparation of a non-polar AlN template, and has potential to enhance the emission performance along the out-of-plane direction in optoelectronic devices. 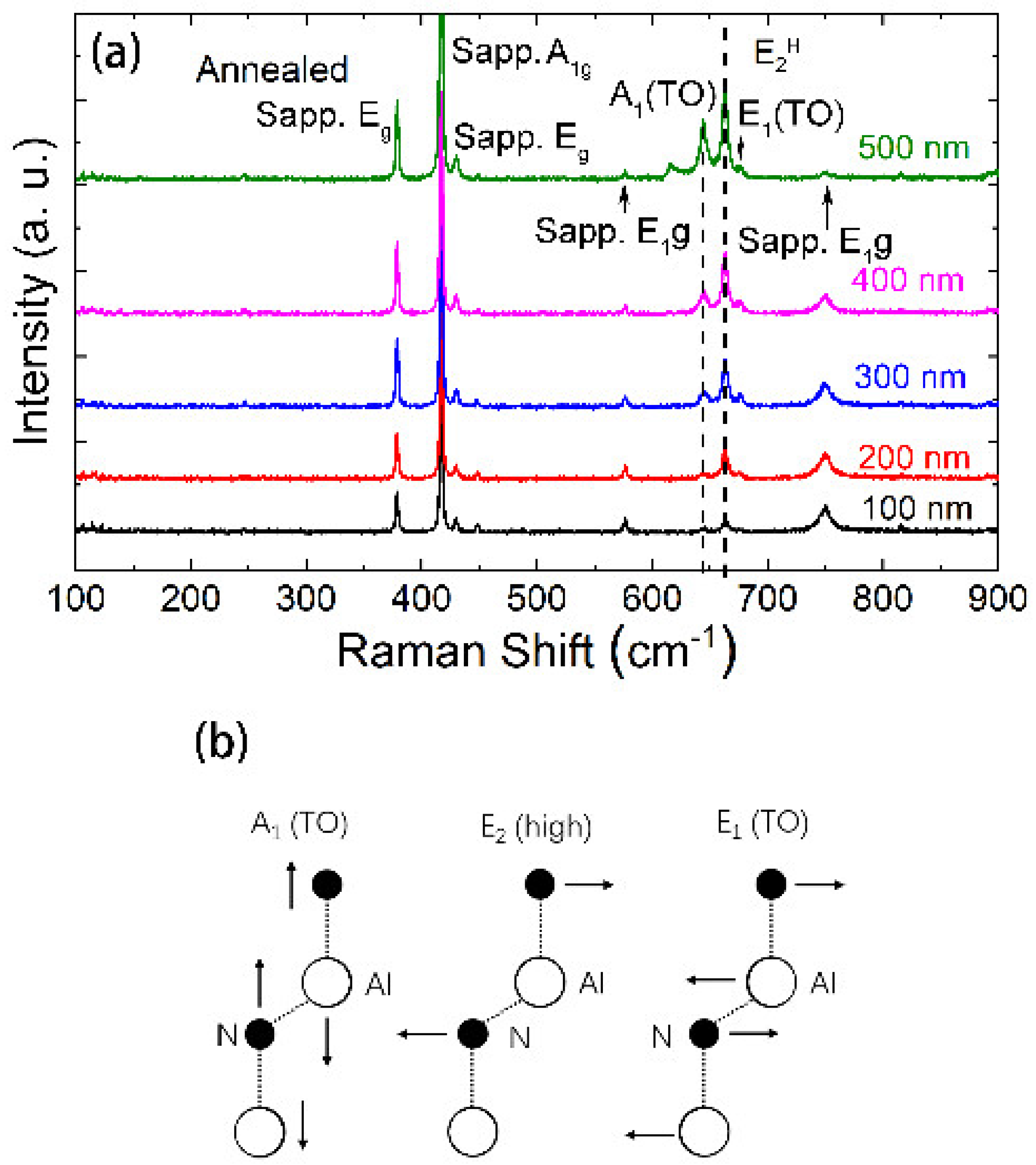 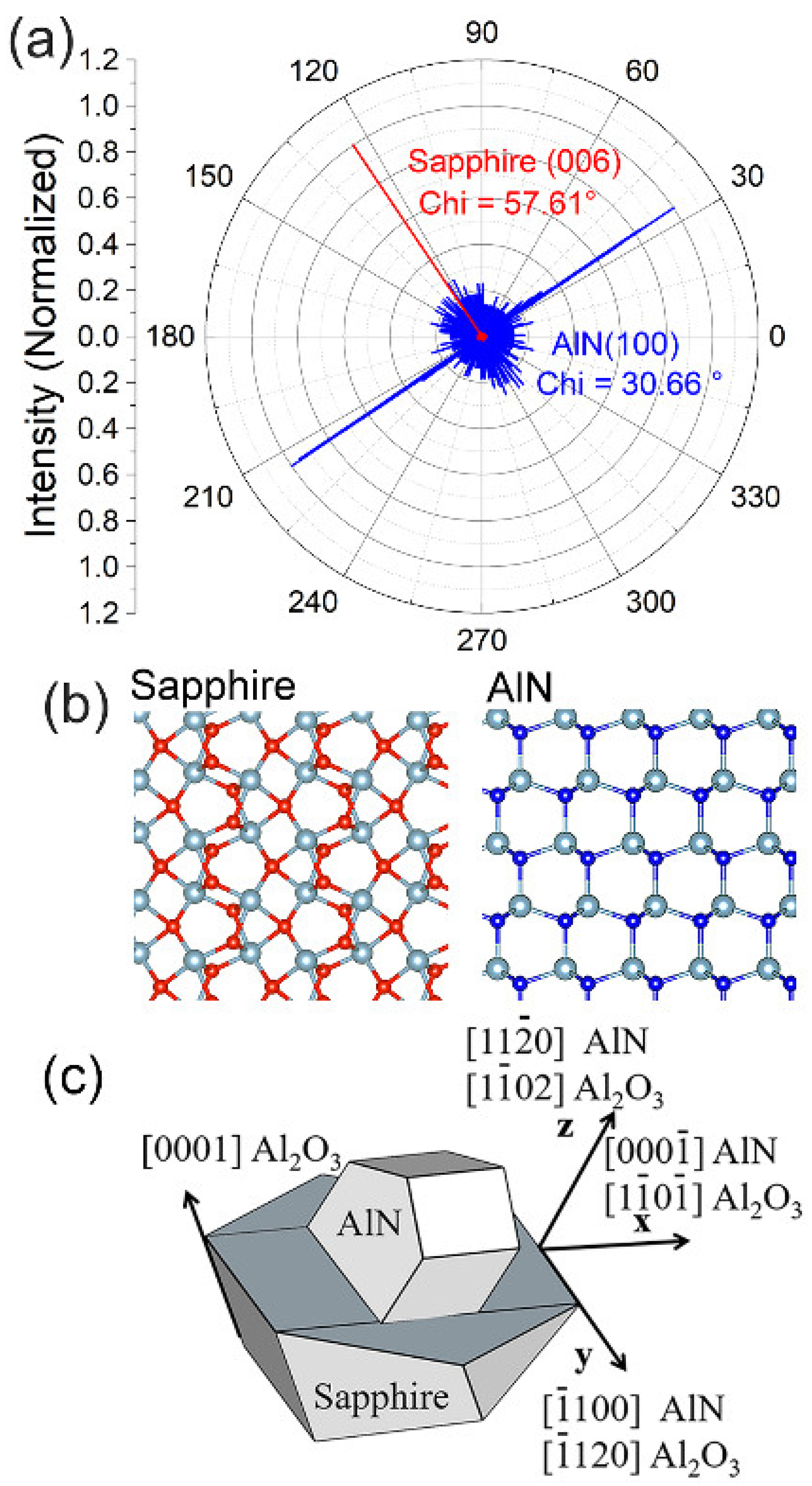 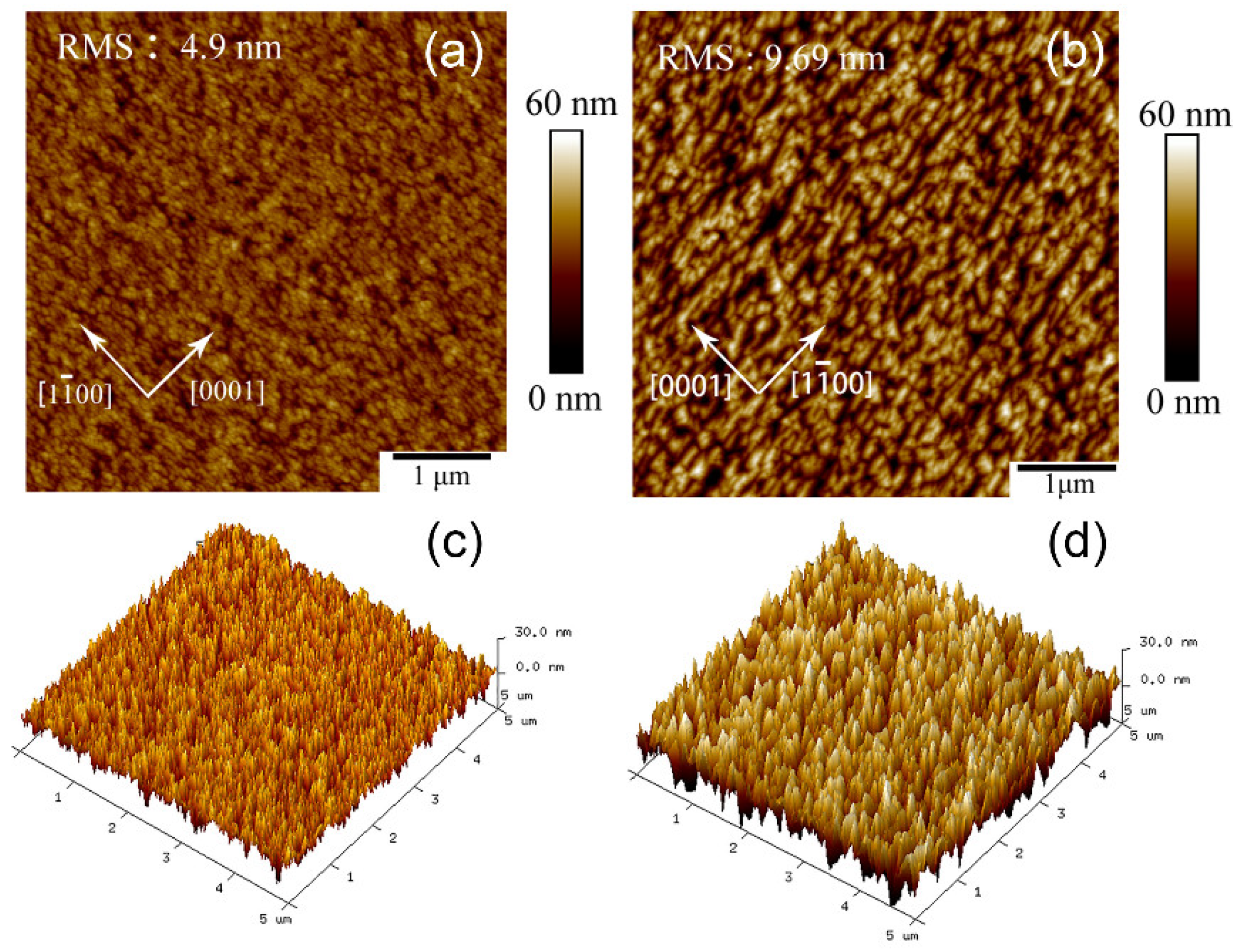