This paper reports a numerical study on heat transfer improvement in a double backward-facing expanding channel using different convectional fluids. A finite volume method with the k-ε standard model is used to investigate the effects of step, Reynolds number and type of liquid on heat transfer enhancement. Three types of conventional fluids (water, ammonia liquid and ethylene glycol) with Reynolds numbers varying from 98.5 to 512 and three cases for different step heights at a constant heat flux (q = 2000 W/m2) are examined. The top wall of the passage and the bottom wall of the upstream section are adiabatic, while the walls of both the first and second steps downstream are heated. The results show that the local Nusselt number rises with the augmentation of the Reynolds number, and the critical effects are seen in the entrance area of the first and second steps. The maximum average Nusselt number, which represents the thermal performance, can be seen clearly in case 1 for EG in comparison to water and ammonia. Due to the expanding of the passage, separation flow is generated, which causes a rapid increment in the local skin friction coefficient, especially at the first and second steps of the downstream section for water, ammonia liquid and EG. The maximum skin friction coefficient is detected in case 1 for water with Re = 512. Trends of velocities for positions (X/H1 = 2.01, X/H2 = 2.51) at the first and second steps for all the studied cases with different types of convectional fluids are indicated in this paper. The presented findings also include the contour of velocity, which shows the recirculation zones at the first and second steps to demonstrate the improvement in the thermal performance. View Full-Text
Keywords: heat transfer; thermal performance; double backward-facing expanding channel; finite volume method heat transfer; thermal performance; double backward-facing expanding channel; finite volume method
►▼ Show Figures 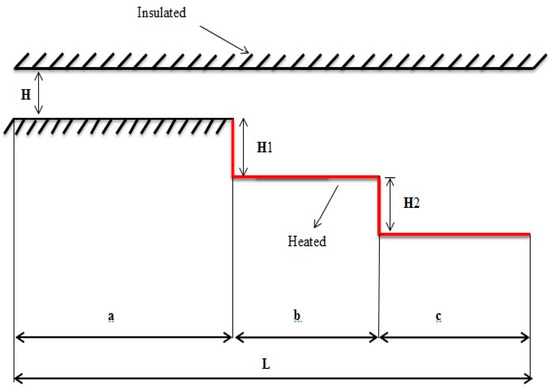