Does Brain Lateralization Affect the Performance in Binary Choice Tasks? A Study in the Animal Model Danio rerio
Previous Article in Journal

The ferret cerebellum is anteriorly right-lateralized and posteriorly left-lateralized. This study characterized the left/right difference in ferret cerebellar lobular morphology using 3D-rendered magnetic resonance images of fixed brains from seven male and seven female ferrets on postnatal day 90. Asymmetrical lobular morphology showed asymmetrical sublobular development in the anterior vermis, lobulus simplex, and ansiform lobules and additional grooves asymmetrically appearing in the paramedian lobule, lobule VI, and ansiform lobules. Although we observed these asymmetric hallmarks in four cerebellar transverse domains in both sexes, there was no left/right difference in their incidence in each domain. Males showed a significantly higher incidence of the additional grooves in the left side of the ansiform lobules than in females. Data were combined and classified as per the asymmetry quotient (AQ) into left- (AQ < 0) and right-dominant (AQ > 0) groups. There were significantly higher incidences of poor sublobular development of ansiform lobules and additional groove appearing in lobule VI on the right than on the left in the left-dominant group. Asymmetric hallmarks visible on the cerebellar surface of ferrets are relevant to the left-biased volume asymmetry of the central zone of cerebellar transversus domains containing lobule VI and ansiform lobules. View Full-Text
Keywords: asymmetry; sex difference; MRI; volumetry; cerebellum; ferret asymmetry; sex difference; MRI; volumetry; cerebellum; ferret
►▼ Show Figures 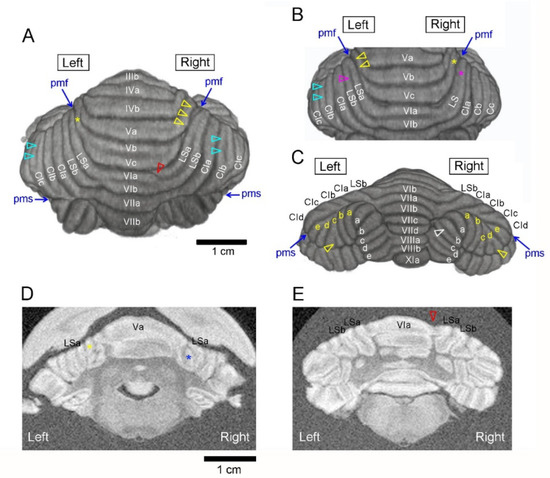