Our primary objective is to construct a plausible, unified model of inflation, dark energy and dark matter from a fundamental Lagrangian action first principle, wherein all fundamental ingredients are systematically dynamically generated starting from a very simple model of modified gravity interacting with a single scalar field employing the formalism of non-Riemannian spacetime volume-elements. The non-Riemannian volume element in the initial scalar field action leads to a hidden, nonlinear Noether symmetry which produces an energy-momentum tensor identified as the sum of a dynamically generated cosmological constant and dust-like dark matter. The non-Riemannian volume-element in the initial Einstein–Hilbert action upon passage to the physical Einstein-frame creates, dynamically, a second scalar field with a non-trivial inflationary potential and with an additional interaction with the dynamically generated dark matter. The resulting Einstein-frame action describes a fully dynamically generated inflationary model coupled to dark matter. Numerical results for observables such as the scalar power spectral index and the tensor-to-scalar ratio conform to the latest 2018 PLANCK data. View Full-Text
Keywords: inflation; dark energy; dark matter inflation; dark energy; dark matter
►▼ Show Figures 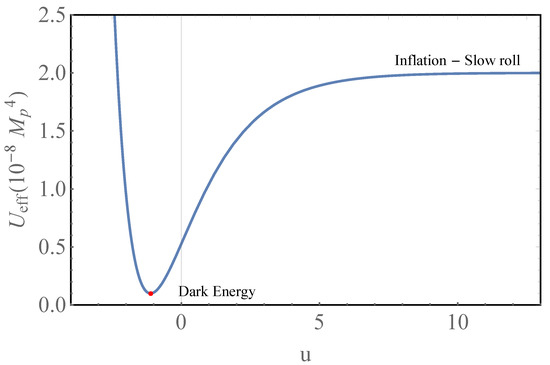