In the real world, multi-objective optimization problems always change over time in most projects. Once the environment changes, the distribution of the optimal solutions would also be changed in decision space. Sometimes, such change may obey the law of symmetry, i.e., the minimum of the objective function in such environment is its maximum in another environment. In such cases, the optimal solutions keep unchanged or vibrate in a small range. However, in most cases, they do not obey the law of symmetry. In order to continue the search that maintains previous search advantages in the changed environment, some prediction strategy would be used to predict the operation position of the Pareto set. Because of this, the segment and multi-directional prediction is proposed in this paper, which consists of three mechanisms. First, by segmenting the optimal solutions set, the prediction about the changes in the distribution of the Pareto front can be ensured. Second, by introducing the cloud theory, the distance error of direction prediction can be offset effectively. Third, by using extra angle search, the angle error of prediction caused by the Pareto set nonlinear variation can also be offset effectively. Finally, eight benchmark problems were used to verify the performance of the proposed algorithm and compared algorithms. The results indicate that the algorithm proposed in this paper has good convergence and distribution, as well as a quick response ability to the changed environment. View Full-Text
Keywords: dynamic multi-objective optimization; cloud theory; linear search; dynamic multi-objective; segment prediction dynamic multi-objective optimization; cloud theory; linear search; dynamic multi-objective; segment prediction
►▼ Show Figures 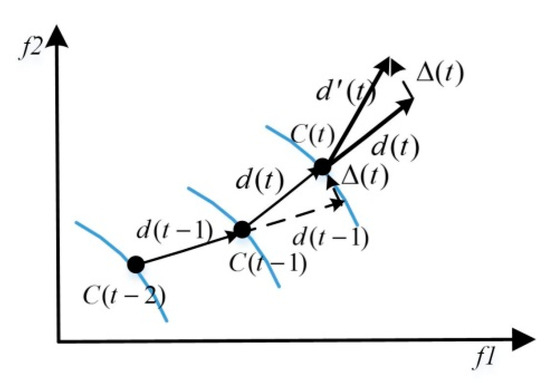