Lack of Correlation between Facial Sexual Dimorphism, Fluctuating Asymmetry and Self-Perceived Attractiveness in Men and Women

A Multivariate Approach to Determine the Dimensionality of Human Facial Asymmetry

Many studies have suggested that developmental instability (DI) could lead to asymmetric development, otherwise known as fluctuating asymmetry (FA). Several attempts to unravel the biological meaning of FA have been made, yet the main step in estimating FA is to remove the effects of directional asymmetry (DA), which is defined as the average bilateral asymmetry at the population level. Here, we demonstrate in a multivariate context that the conventional method of DA correction does not adequately compensate for the effects of DA in other dimensions of asymmetry. This appears to be due to the presence of between-individual variation along the DA dimension. Consequently, we propose to decompose asymmetry into its different orthogonal dimensions, where we introduce a new measure of asymmetry, namely fluctuating directional asymmetry (F-DA). This measure describes individual variation in the dimension of DA, and can be used to adequately correct the asymmetry measurements for the presence of DA. We provide evidence that this measure can be useful in disentangling the different dimensions of asymmetry, and further studies on this measure can provide valuable insight into the underlying biological processes leading to these different asymmetry dimensions.
Keywords: fluctuating asymmetry; 3D morphometrics; directional asymmetry; sexual dimorphism fluctuating asymmetry; 3D morphometrics; directional asymmetry; sexual dimorphism

The dataset comprises 1246 adult face scans (623 males and 623 females) of people between the ages of 18 and 35, with a BMI within the normal range (18.5–24.9 kg/m2), all with self-reported European-derived ancestry and no history of any significant facial trauma or facial surgery, or any medical condition that might alter facial structure. The facial scans originated from a mixture of several studies at the University of Pittsburgh, Pennsylvania State University and Indiana University–Purdue University, Indianapolis. The scans were made using two stereophotogrammetry systems: the VECTRA H1 camera (Canfield Scientific, Parsippany, NJ, USA); and the 3dMDface system (3dMD, Atlanta, GA, USA).
The total asymmetry (TA) was determined using a multivariate spatially dense approach [18,19]. Briefly, a symmetrical template face comprised of n = 7160 densely located paired vertices was mapped onto each of the faces in the dataset, using a non-rigid iterative closest points (ICP) algorithm (see Supplementary Materials). The reflection of the faces was obtained by reversing the sign of the X coordinates of the vertices (the x-axis passes through the middle of the face), and then relabeling the vertices with their paired counterparts in order to regain compatibility of the original face and its mirror [20]. The original faces and their reflections were then fed into a weighted generalized Procrustes analysis, in which a higher weight was assigned to the more symmetrical regions of the face [21]. The asymmetry vector (TA) for each face was then simply calculated by subtracting the mirrored face from the original. From this point on, the male and female faces were treated as two separate groups. Following the conventional approach, DA was calculated as a vector reflecting the average of TA (the asymmetry vectors) of all the faces in men and women (Figure 3). The significance of the acquired DA vectors (whether the average TA is different than zero), as well as sexual dimorphism in DA (the difference between DA in males and females), was tested, as described in detail by Claes et al. (2012). The DA was calculated as the difference in the sample mean of the original and the reflected faces, treated as different populations. Permutation tests were used on simple Euclidean distances (D-statistics) and Goodall’s F-test (F-statistics) to measure the significance of DA in both groups. The sexual dimorphism in DA was tested as the difference in the sample mean of TA matrices for men and women, and the significance was again checked using permutation tests.
Initially, we corrected the TA traditionally by subtracting the DA vector from each individual asymmetry vector. This approach ignores the between-individual asymmetry variation in the direction of DA (Figure 2a). We then used principal component analysis (PCA) to investigate the different dimensions of the FA vectors, and tested if these PCs correlate with the DA vectors in both men and women. This test evaluates if the FA dimensions contain any shared information with the dimension of DA, which ideally should not exist.
As we anticipated, there were significant correlations (see below), meaning that the FAs were not independent of variation in the dimension of DA. We thus propose to disentangle the components of asymmetry by obtaining individual variation in the dimension of DA (i.e., the F-DA vector) by regressing the FA vectors onto the DA vector. Following the principles of vector projection and the formula for an inner product of two vectors, the F-DA vector can then be calculated as where is the dot product of the FA and DA vectors, is the angle between these two vectors and is the unit vector representing the direction of DA. The term also gives us the signed magnitude of F-DA. This magnitude represents individual variation in asymmetry in the direction of DA, and can be used to check for the presence of anti-symmetry by analyzing the distribution of the F-DA magnitudes. This approach is based on the definition of AS, which occurs by mixing two genotypes, with each having directional asymmetry in opposite directions [12]. Between-individual variation in asymmetry corrected for both DA and F-DA (i.e., the C-FA vector) can then be obtained by subtracting F-DA from the FA vector. This process follows a similar concept to that of correcting allometry [22]. We applied PCA on the acquired C-FA vectors, and checked the PCs for correlations with the DA vector, in order to validate our expectation of orthogonality (i.e., no correlation) for these vectors. As noted above, this analysis does not test for similarities in the developmental processes leading to the morphological asymmetries, but only checks if these dimensions are indeed orthogonal. These PCs were then used to explore and compare the different dimensions of C-FA. We also analyzed the distribution of F-DA magnitudes, and compared them between men and women. The kurtosis of the distributions of F-DA was calculated to check for the possible presence of AS. Finally, on an individual basis, the absolute values of the individual PC scores of C-FA and of F-DA were correlated to explore evidence for joint underlying developmental processes.

Both directional asymmetry and the sexual dimorphism in DA were statistically significant (DA men: D = 21.5, p = 0.001; DA women: D = 15.0, p = 0.01; sexual dimorphism in DA: D = 14.0, p = 0.003). Tests based on F-statistics confirmed these conclusions (details not shown). The visualization of DA in men and women, as well as a heat-map of the DA differences, are shown in Figure 4.
At the individual level, the F-DA vectors reflect individual variation in asymmetry in the direction of DA in men and women. The distribution of signed magnitudes of the F-DA vectors (the F-DA scores, Figure 5) did not show any signs of platykurtosis or a bimodal pattern; this supports the absence of AS. Histograms of the signed magnitude of the calculated F-DA vectors are presented in Figure 5. Men showed a significantly higher variance, and thus had magnitudes of variation in F-DA scores among individuals when compared to women (F622,622 = 0.40, p < 0.001).

Following the conventional method of DA correction—i.e., simply subtracting the average asymmetry from TA (Figure 2a)—the principal components of the FA vectors were obtained, and their correlation with the DA vector was calculated for the first five PCs (Table 2). The first five PCs of FA, representing the main directions of variation in FA, explained 62% and 60% of the asymmetry variation in men and women respectively (Table 2). Many of these dimensions correlated significantly with the dimension of the DA vector in both men and women, where correlations were stronger in men (Table 2).
The same set of correlations was calculated after performing the F-DA correction, i.e., removing between-individual variation in the direction of DA. As expected, since the DA and C-FA vectors are by definition orthogonal, there was no correlation observed between these vectors (r < 0.001, p > 0.1 for all PCs), demonstrating that the C-FA vectors are adequately corrected for all asymmetry variations in the direction of DA.
Figure 6 presents heat maps of the asymmetry dimensions (the DA vector, as well as the first five PCs of C-FA) in men and women. We can visually confirm that DA is more prominent in men. A similarity of patterns is observed across the different dimensions of C-FA between men and women, although contrary to DA, the expression of asymmetry in different dimensions does not seem to be more prominent in either sex.

If the same underlying developmental processes would lead to between-individual differences in asymmetry in the different dimensions identified here, the magnitudes of the scores (i.e., the absolute values) are expected to correlate positively. The absolute values of the C-FA scores from the five PCs did not correlate significantly among themselves, neither in men nor women (all r < 0.001). Correlations between the absolute values of the F-DA and those of C-FA were somewhat higher, and statistically significant in several cases (Table 3), with the highest correlation between |F-DA| and |C-FA| of PC3 in men (Table 3), suggesting that some of the between-individual variations in these two dimensions have a shared biological background. 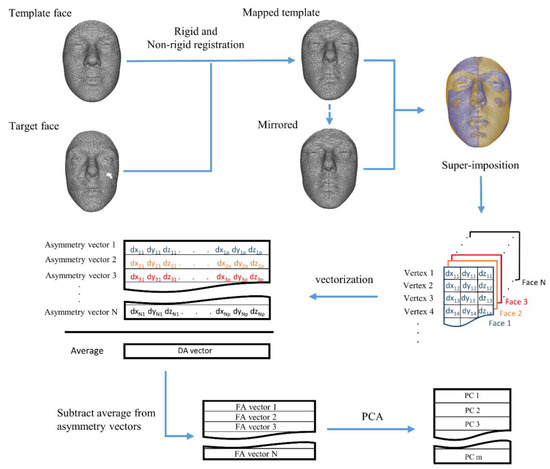 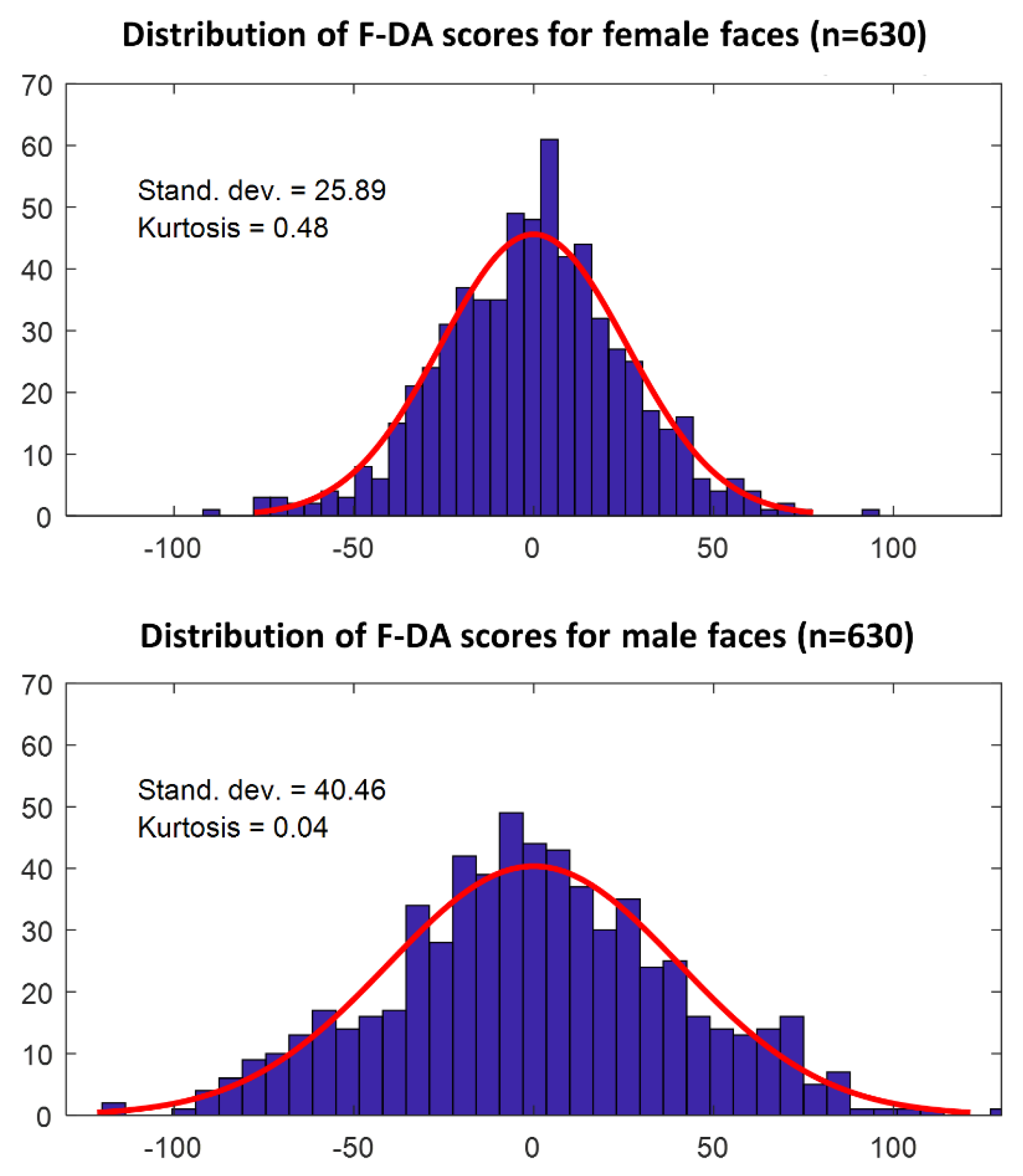