The present study investigated the unsteady magnetohydrodynamic (MHD) nanofluid flow over a radially nonlinear stretching sheet along with the viscosity dependent on temperature, convective boundary condition, thermo-diffusion, and the radiation effects. Moreover, the nanofluid’s viscous effects were considered dependent on temperature and the exponential Reynolds model was considered in this context. It was additionally assumed that a uniform suspension of nanoparticles is present in the base fluid. The Buongiorno model, which involves the thermophoresis and Brownian motion effects, was considered. For the sake of a solution, the variational finite element method was selected with coding in MATLAB and the numerical results were contrasted with the published articles. The influence of various physical parameters on the velocity, temperature, and concentration profiles are discussed by the aid of graphs and tables. It was detected that the nanofuid viscosity parameter declines the fluid flow velocity, while, for the temperature and the concentration profiles, it accomplished the reverse phenomenon. View Full-Text
Keywords: nano-fliud; themo-diffussion; MHD; finite element method; convective surface bounday conditions; variable vioscosity nano-fliud; themo-diffussion; MHD; finite element method; convective surface bounday conditions; variable vioscosity
►▼ Show Figures 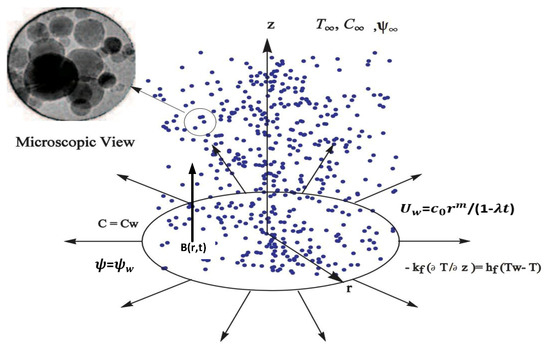