The general theory of relativity (GR) is symmetric under smooth coordinate transformations, also known as diffeomorphisms. The general coordinate transformation group has a linear subgroup denoted as the Lorentz group of symmetry, which is also maintained in the weak field approximation to GR. The dominant operator in the weak field equation of GR is thus the d’Alembert (wave) operator, which has a retarded potential solution. Galaxies are huge physical systems with dimensions of many tens of thousands of light years. Thus, any change at the galactic center will be noticed at the rim only tens of thousands of years later. Those retardation effects are neglected in the present day galactic modelling used to calculate rotational velocities of matter in the rims of the galaxy and surrounding gas. The significant differences between the predictions of Newtonian instantaneous action at a distance and observed velocities are usually explained by either assuming dark matter or by modifying the laws of gravity (MOND). In this paper, we will show that, by taking general relativity seriously without neglecting retardation effects, one can explain the radial velocities of galactic matter in the M33 galaxy without postulating dark matter. It should be stressed that the current approach does not require that velocities v are high; in fact, the vast majority of galactic bodies (stars, gas) are substantially subluminal—in other words, the ratio of . Typical velocities in galaxies are 100 km/s, which makes this ratio or smaller. However, one should consider the fact that every gravitational system, even if it is made of subluminal bodies, has a retardation distance, beyond which the retardation effect cannot be neglected. Every natural system, such as stars and galaxies and even galactic clusters, exchanges mass with its environment, for example, the sun loses mass through solar wind and galaxies accrete gas from the intergalactic medium. This means that all natural gravitational systems have a finite retardation distance. The question is thus quantitative: how large is the retardation distance? For the M33 galaxy, the velocity curve indicates that the retardation effects cannot be neglected beyond a certain distance, which was calculated to be roughly 14,000 light years; similar analysis for other galaxies of different types has shown similar results. We demonstrate, using a detailed model, that this does not require a high velocity of gas or stars in or out of the galaxy and is perfectly consistent with the current observational knowledge of galactic and extra galactic material content and dynamics. View Full-Text
Keywords: spacetime symmetry; relativity of spacetime; Lorentz symmetry group; retardation; galactic rotation curves spacetime symmetry; relativity of spacetime; Lorentz symmetry group; retardation; galactic rotation curves
►▼ Show Figures 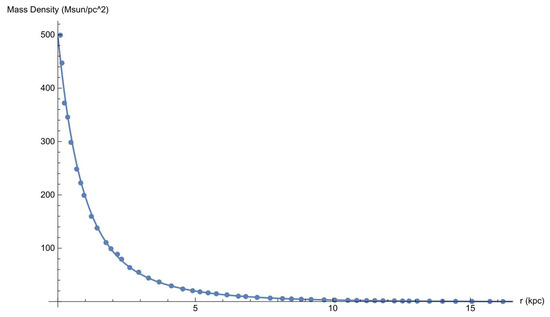