System Identification Based on Tensor Decompositions: A Trilinear Approach

The theory of nonlinear systems can currently be encountered in many important fields, while the nonlinear behavior of electronic systems and devices has been studied for a long time. However, a global approach for dealing with nonlinear systems does not exist and the methods to address this problem differ depending on the application and on the types of nonlinearities. An interesting category of nonlinear systems is one that can be regarded as an ensemble of (approximately) linear systems. Some popular examples in this context are nonlinear electronic devices (such as acoustic echo cancellers, which are used in applications for two-party or multi-party voice communications, e.g., videoconferencing), which can be modeled as a cascade of linear and nonlinear systems, similar to the Hammerstein model. Multiple-input/single-output (MISO) systems can also be regarded as separable multilinear systems and be treated using the appropriate methods. The high dimension of the parameter space in such problems can be addressed with methods based on tensor decompositions and modelling. In recent work, we focused on a particular type of multilinear structure—namely the bilinear form (i.e., two-dimensional decompositions)—in the framework of identifying spatiotemporal models. In this paper, we extend the work to the decomposition of more complex systems and we propose an iterative Wiener filter tailored for the identification of trilinear forms (where third-order tensors are involved), which can then be further extended to higher order multilinear structures. In addition, we derive the least-mean-square (LMS) and normalized LMS (NLMS) algorithms tailored for such trilinear forms. Simulations performed in the context of system identification (based on the MISO system approach) indicate the good performance of the proposed solution, as compared to conventional approaches. View Full-Text
Keywords: nonlinear systems; multiple-input/single-output (MISO) systems; Wiener filter, least-mean-square (LMS) algorithm; normalized LMS (NLMS) algorithm; trilinear forms; tensors nonlinear systems; multiple-input/single-output (MISO) systems; Wiener filter, least-mean-square (LMS) algorithm; normalized LMS (NLMS) algorithm; trilinear forms; tensors
►▼ Show Figures 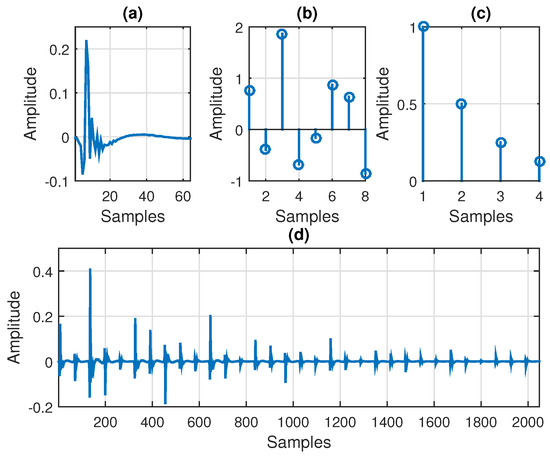