:
The influence of entropy generation on aligned magnetic flow-including nanoparticles through a convectively heated radial stretched surface in the existence of Cattaneo–Christov heat flux is inspected. The highly nonlinear leading PDE’s via the similar scaling transformation are developed. The resulting system via the bvp4c technique from Matlab is computed. The impacts of rising constraints on the liquid velocity, nanoparticles concentration and temperature profile are argued and showed via portraits and table. In addition, the performance of liquid flow is inspected through the friction factor, the mass and heat transfer rate. With the rise in the thermal relaxation constraint, the thermal boundary layer is appreciably altered. Due to an aligned angle, the velocity of nanoliquid declines, while the concentration and temperature of nanofluid augment. It is also observed that the values of friction factor increase, whereas the values of heat and mass transfer decline due to an aligned angle. Entropy generation profiles developed due to magnetic parameters and the aligned angle. Lastly, a comparative scrutiny is composed via the previous studies which lead to support for our presently developed model.
Keywords:
nanofluid; MHD aligned flow; convective boundary condition; entropy generation; Cattaneo–Christov heat flux

A steady magnetic aligned flow towards a radial stretched surface comprising nanoparticles is scrutinized. The surface is stretchable in the radially way with velocity , where is invariable along with an aligned acute angle is pertained. Heat flux has been characterized via the theory of Cattaneo-Christov. The lower surface is further supposed to be convectively heated from hot liquid at , which presents a transfer of heat coefficient . The leading relevant equations through these postulations are as engraved
The physical boundary conditions are where are elements of velocity in , directions, respectively, the kinematic viscosity, the density, the electrical conductivity, the thermal diffusivity, the strength of magnetic field, the temperature, time relaxation of heat flux, concentration of nanoparticles, the thermophoresis diffusion and the Brownian constraint, the coefficient of thermal conductivity, and is the ratio b/w the effective heat-capacity of the substance of nanoparticles and specific heat-capacity of the fluid.
The similarity transformation is used as:
In light of this relation (6), Equations (2)–(4) are transmuted to
The converted boundary restrictions are where ‘ points out the differentiation to , magnetic parameter, Brownian parameter, thermal relaxation parameter, thermophoresis parameter, Prandtl number, convective parameter, the Schmidt number.
The significant physical quantities which are well-defined as where , , the shear stress, the heat and mass flux, respectively are described as
That is, where is the local Reynolds number.

The transmuted nonlinear ODE’s (7)–(9) through the converted boundary restrictions (10) are deciphered numerically via the bvp4c solver. The influences of relevant constraints concerning in the liquid flow problem are argued via tables and graphs. The range of the physical parameters are considered as , , , , , , , , , , , . Table 1 presents the evaluation of the current results of with the results of Butt and Ali [42] and Soid et al. [43] in restrictive cases are closely harmonized, which guaranteed the soundness of the present methodology. Geometry of the problem is given in Figure 1.
Figure 2, Figure 3 and Figure 4 scrutinize the impact of aligned angle on , and . Figure 2 elucidates that the momentum boundary layer showing a decelerating behavior for the velocity profile with boost up the parameter . Since the impact of larger values of aligned angle builds a stronger impression on the external magnetic field. Despite this, the thermal and concentration boundary layers in both profiles signify an enhancing behavior as depicted in Figure 3 and Figure 4, respectively.
Figure 5, Figure 6 and Figure 7 highlight the influence of magnetic field on , and the volume fraction of nanoparticles. Figure 5 scrutinize that the fluid velocity shows a downtrend due to swelling values of . Since the magnetic constraint is communicated with a resistive drag type force (Lorentz force), so enhance in , which offers an extra friction to the fluid flow which in turn diminishes the velocity. Figure 6 and Figure 7 explain that the concentration and thermal boundary layers growing higher and higher in both profiles as enhances. Physically, the Lorentz strength gives a supplementary confrontation to the flow of fluid particle. Thus, more temperature is generated which consequently escalates the temperature distribution.
Figure 8 and Figure 9 are set to monitor the motion of Brownian and thermophoresis parameter on the distribution of temperature profile and nanoparticles concentration profile. The thermal boundary layer mounting for the temperature distribution as we augmented the values of and graphically behavior is captured in Figure 8. Physically, the nanoparticles kinetic energy enhances owing to the strength of the chaotic motion and thus, the fluid temperature raises. It is inspected from Figure 8 that the nanoparticles concentration decays because of enhancing . Therefore, the motion of Brownian parameter builds the warm liquid inside the boundary and intensifies particle deposition left from the fluid regime to sheet at that time that causing in a decline in nanoparticles concentration and the thickness of the boundary-layer. The higher Brownian motion values involve the strong performance for the minor particle, while the lesser values of pertained for stronger particle. Figure 9 discloses that the behavior of the solutions boosts up for both the temperature distribution and as well as for the concentration of nanoparticles for bigger values of . Physically, diffusion enters into the fluid deeper by enhancing which grounds to increase in concentration and thermal boundary layers. Further, the impact of being further marked on the volume fraction contrast in temperature.
The outcome of convective parameter on and are portrayed in Figure 10. It is analyzed from these figures that the profiles of and elevated as raises. The strong convective heat at the sheet appearing due to mounting values of , which growing the temperature and concentration. It authorized the species and as well as the thermal effect to pierce deeper into the quiescent fluid. As a result of the outcome they augmented the boundary layer with widening for both the temperature and as well as the concentration. Figure 11 depicts the behavior of thermal relaxation constraint  on θ(η). The results indicate that the temperature of fluid declines with augmenting thermal relaxation parameter. Physically, enhancing the thermal relaxation parameter increases the gap between the liquid molecules and due to these effects, the temperature of fluid depreciates.
Figure 12, Figure 13, Figure 14 and Figure 15 intricate the deviation of entropy generation for preferred values of aligned angle , Brinkman number , Reynolds number and magnetic parameter . Figure 12 predicts that the profile of entropy generation decreases with growing . Figure 13 reveals that the entropy generation augments due to larger . It perceives that the magnetic field is a resource of entropy generation to the heat transfer and friction of fluid. It can be finalized that the entropy generation can be controlled by taking a small magnetic parameter which is an important issue in the propulsion of MHD nuclear. It is perceived from Figure 14 and Figure 15 that entropy profile accelerates by growing either or Reynolds number. As the entropy generation created from machines of all irreversibility and consequently the entropy generation rises with augmenting . The higher amount in the entropy generation formed via the irreversibility of liquid friction happens owing to growing .
The essential physical quantities , and with are discussed in Figure 16, Figure 17 and Figure 18, respectively. Figure 16 reveals that the values of uplifts due to . It is also inspected that the values of significantly enhances as enhances. Whereas, the values of and decay due to as shown in Figure 17 and Figure 18, respectively, while these values appreciably decline with increasing values of . These values are also tabulated in Table 2. Moreover, the values of , and are positive, indicating that mass and heat species are mutated from the warm sheet to the cold liquid.

The impacts of entropy generation and Cattaneo–Christov heat flux on MHD aligned flow past a radial convectively-heated stretched sheet comprising nanoparticles were studied numerically. The governing equations are developed into ODE’s via the similar scaling transformation and these equations worked out numerically via the bvp4c solver. The subsequent attention-grabbing results can be ported from this research:

The authors would like to extend their sincere appreciation to the Deanship of Scientific Research at King Saud University for its funding of this research through the Research Group Project No. RGP-160. 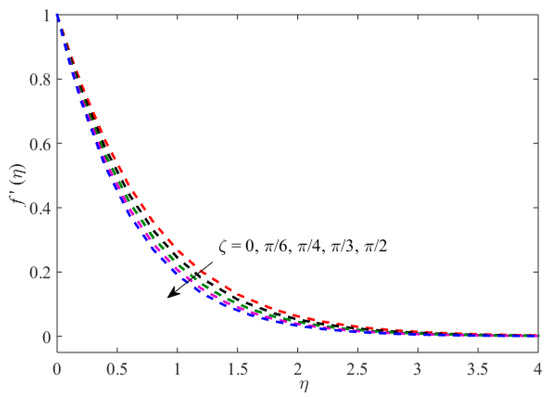 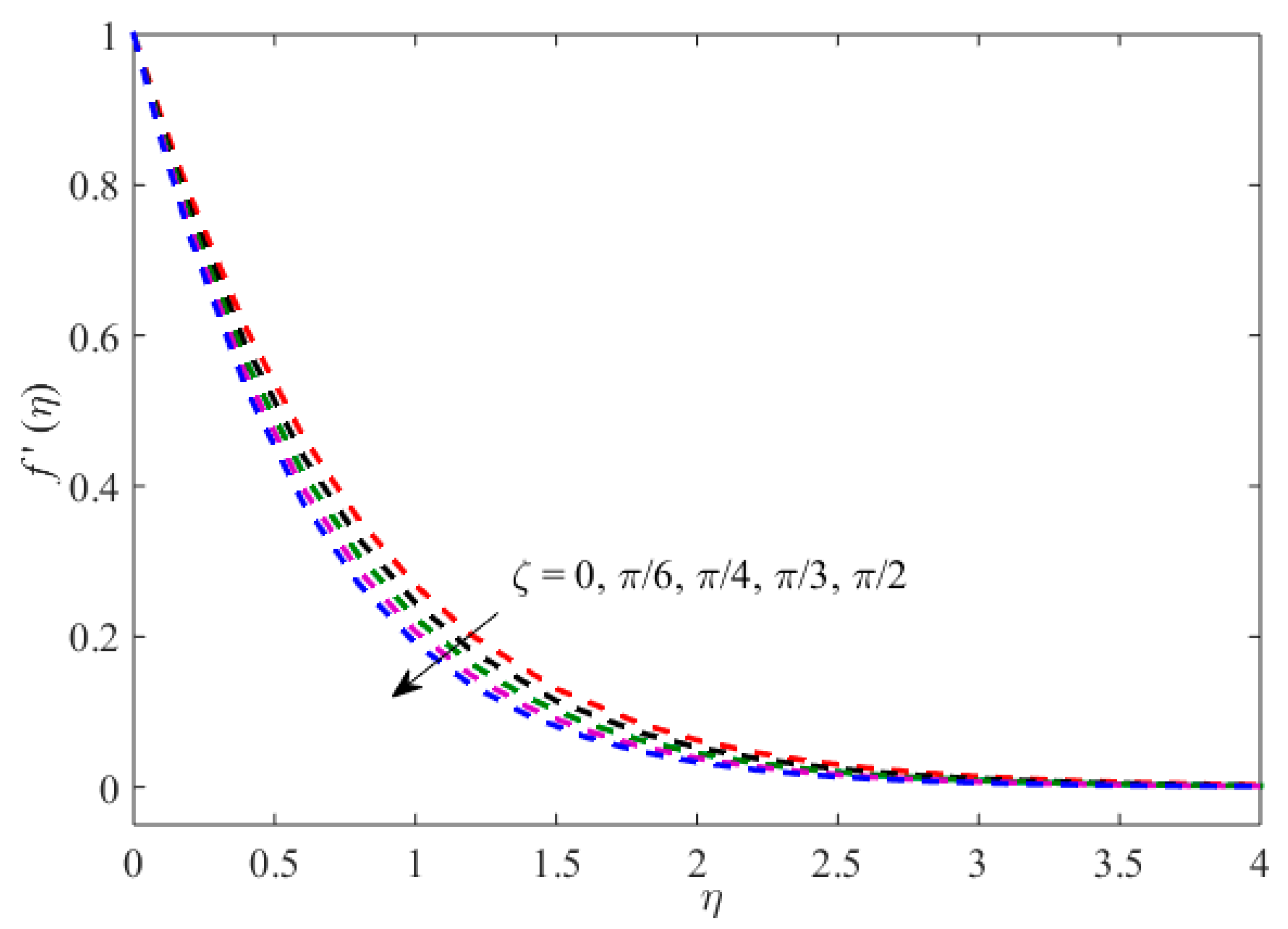 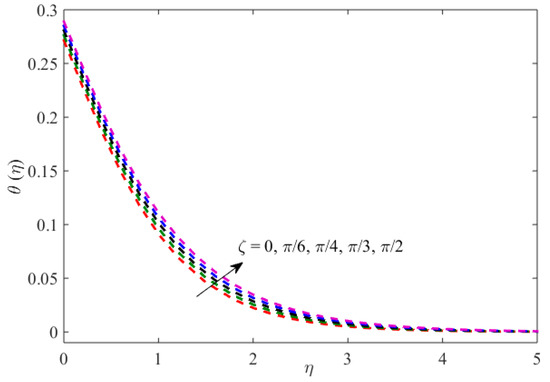 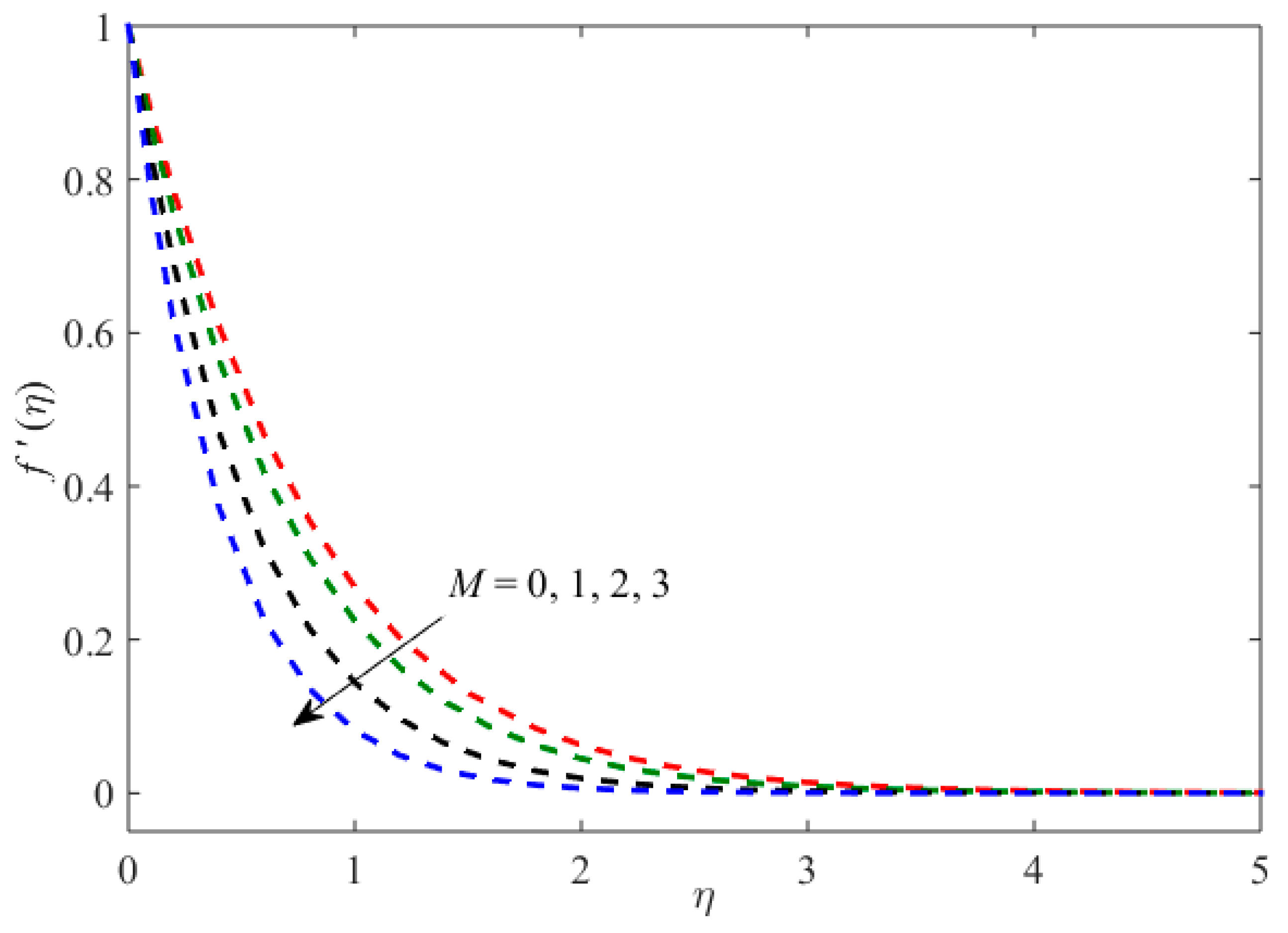 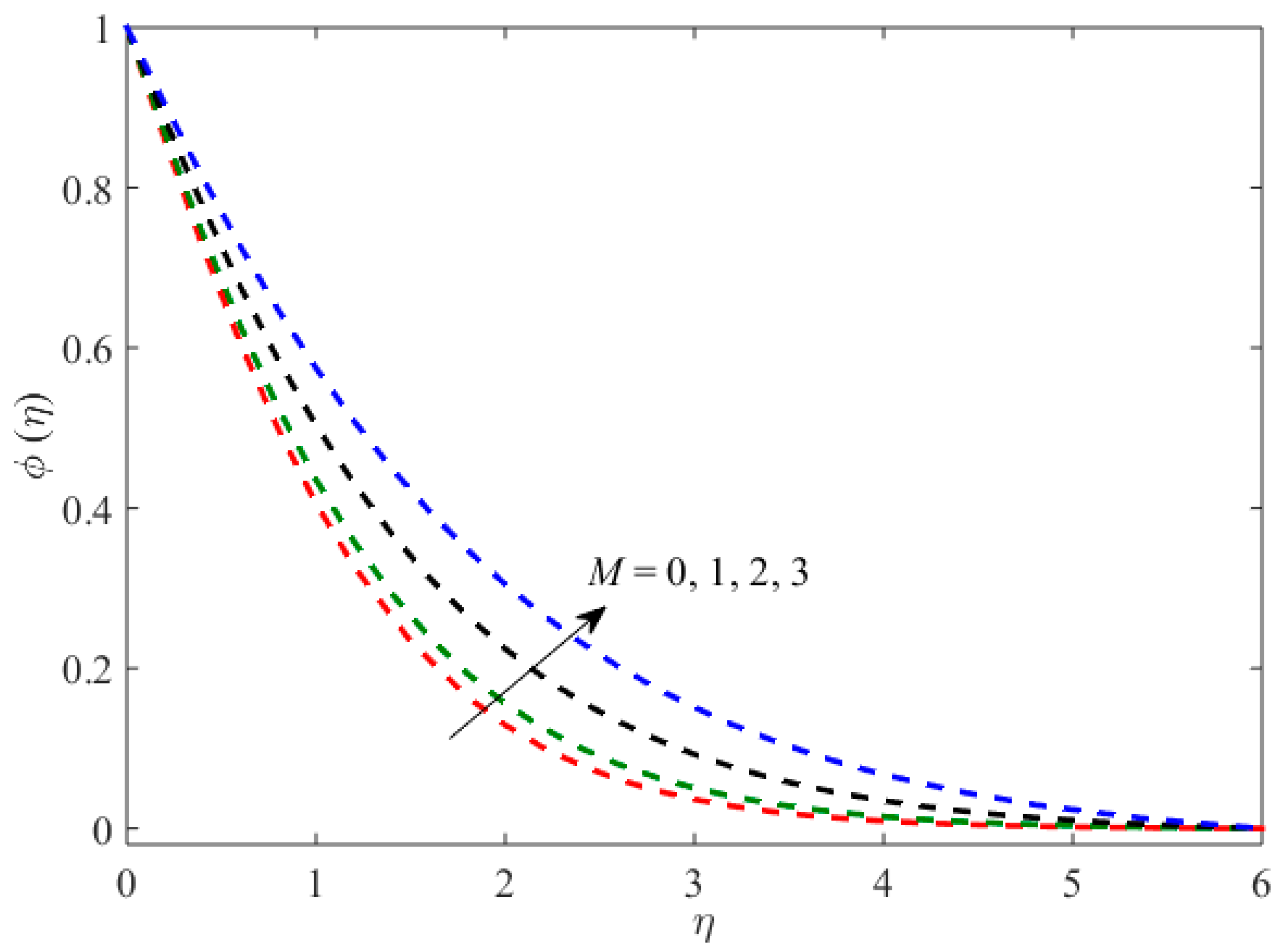 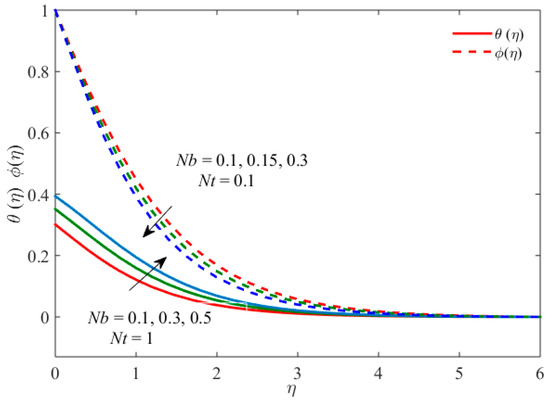 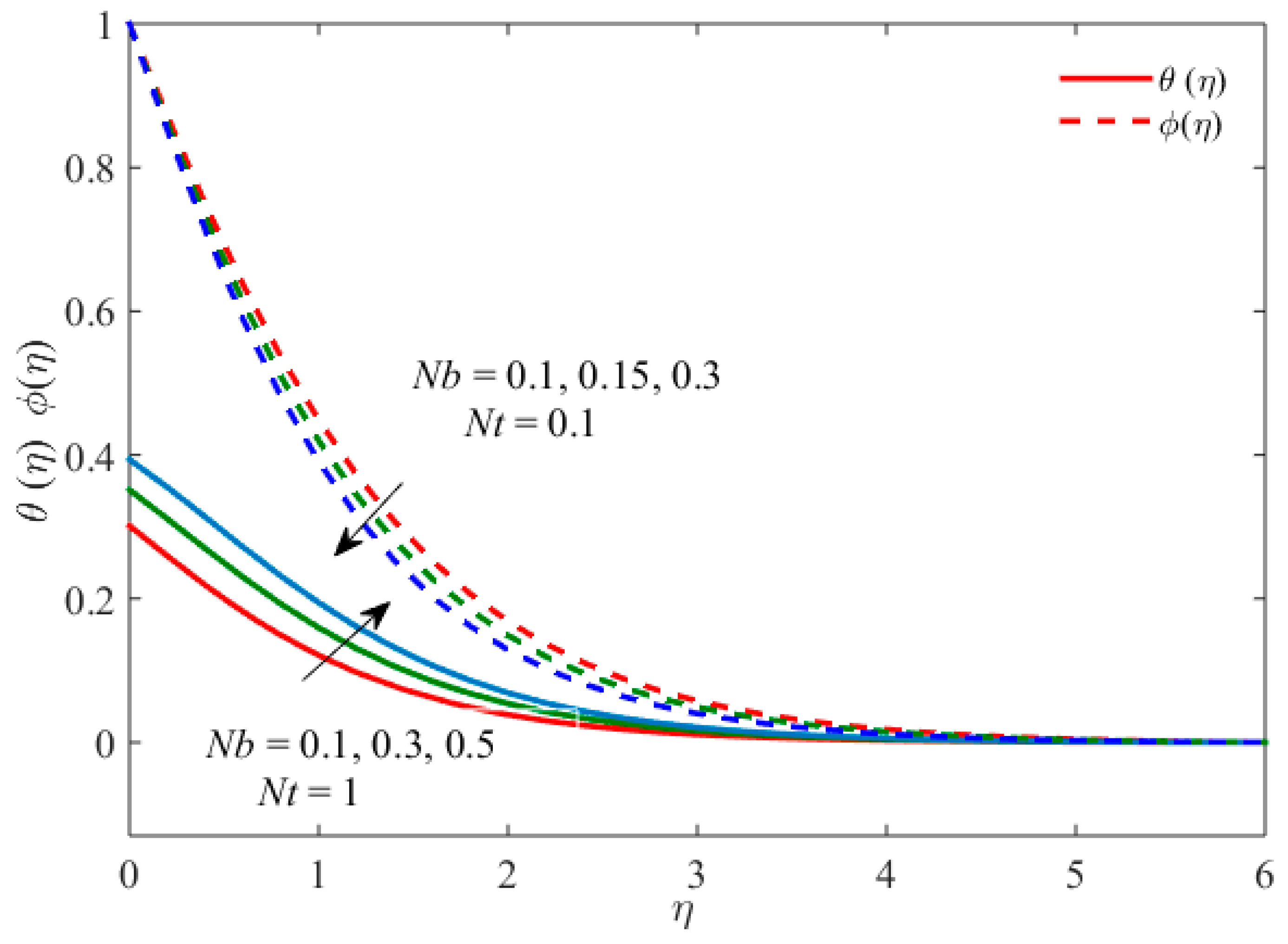 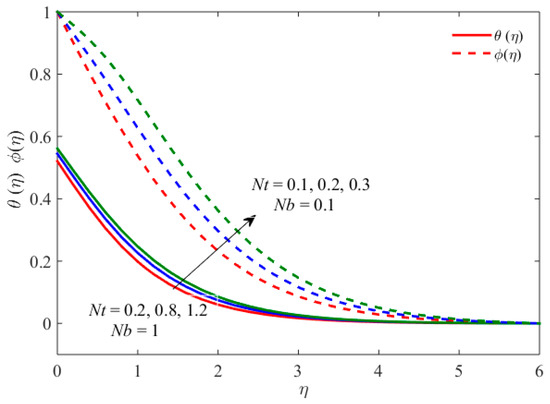 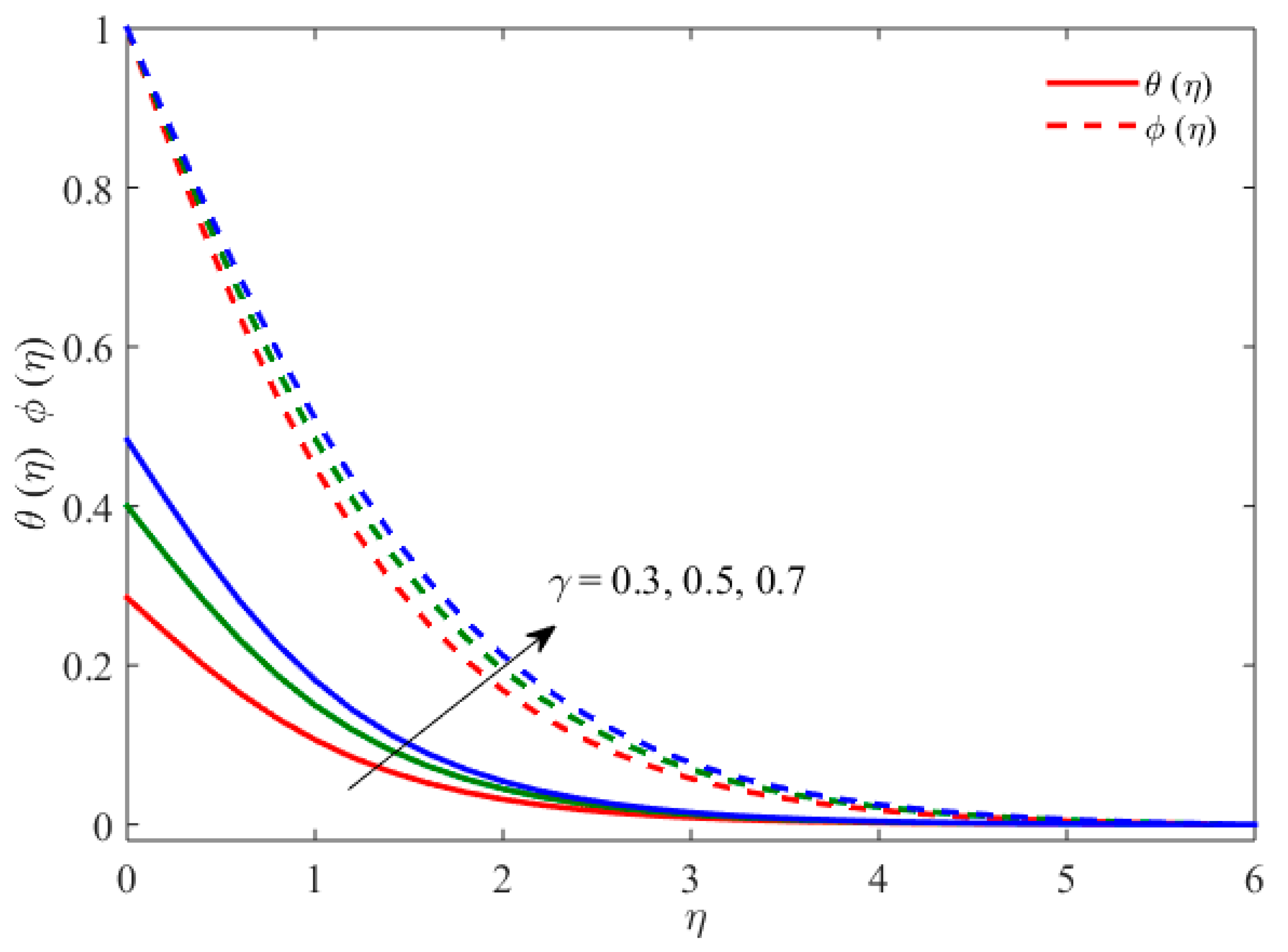 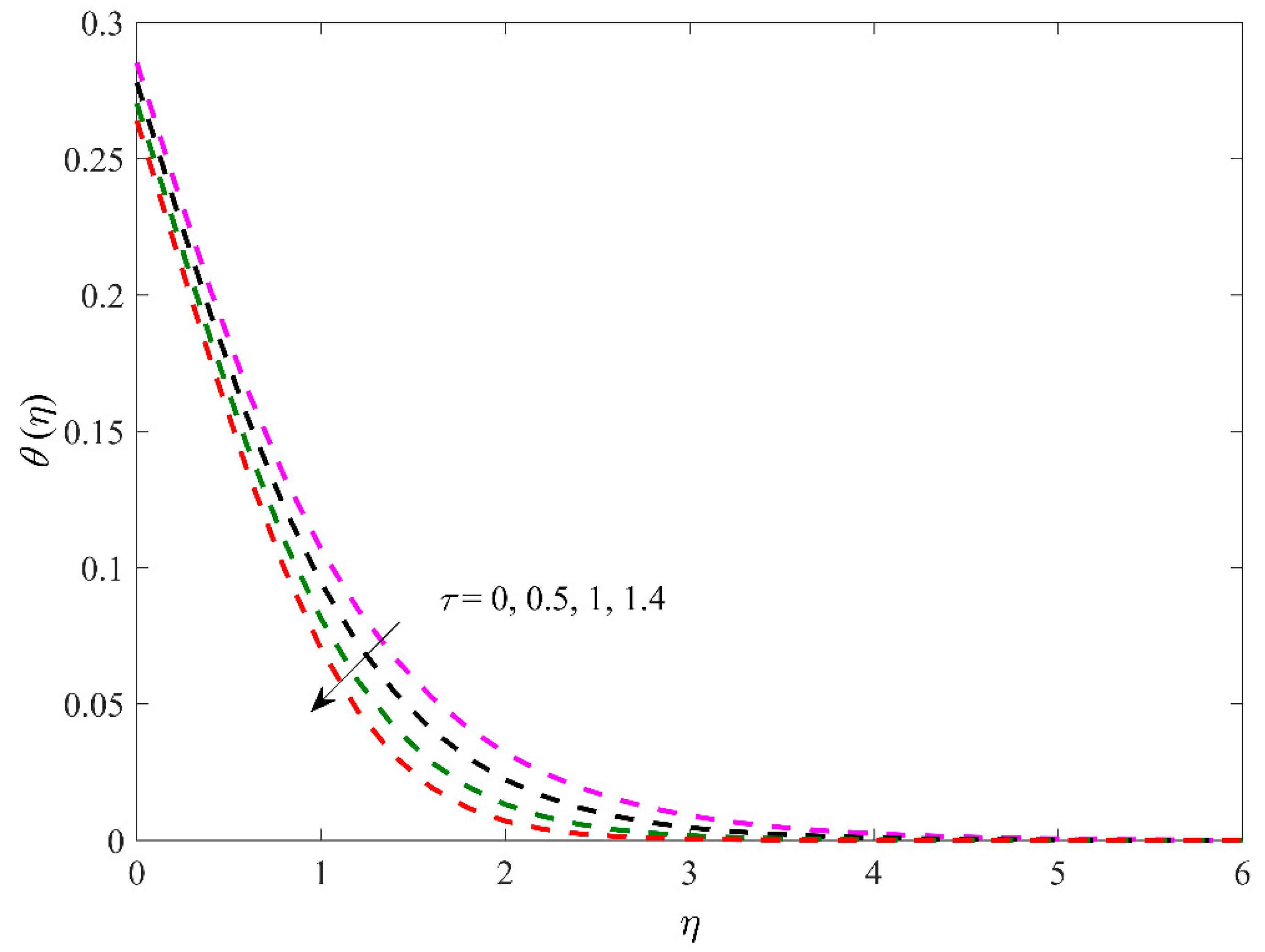 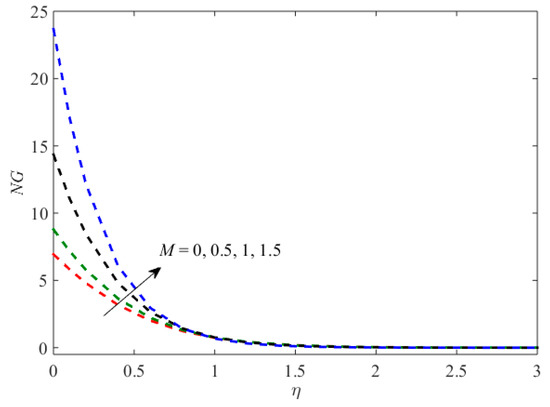 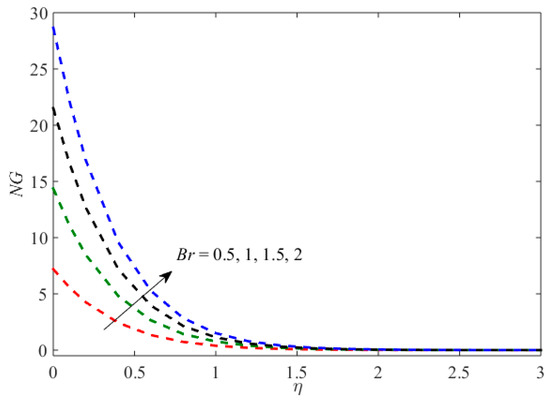 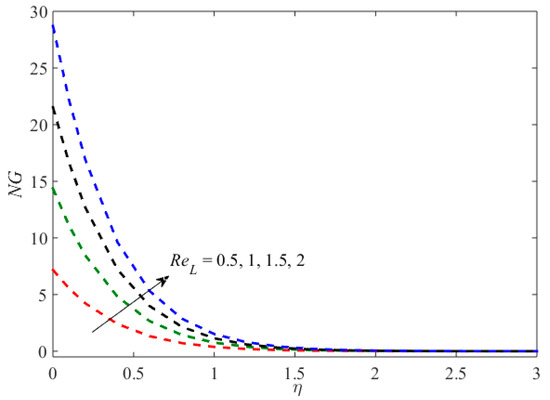 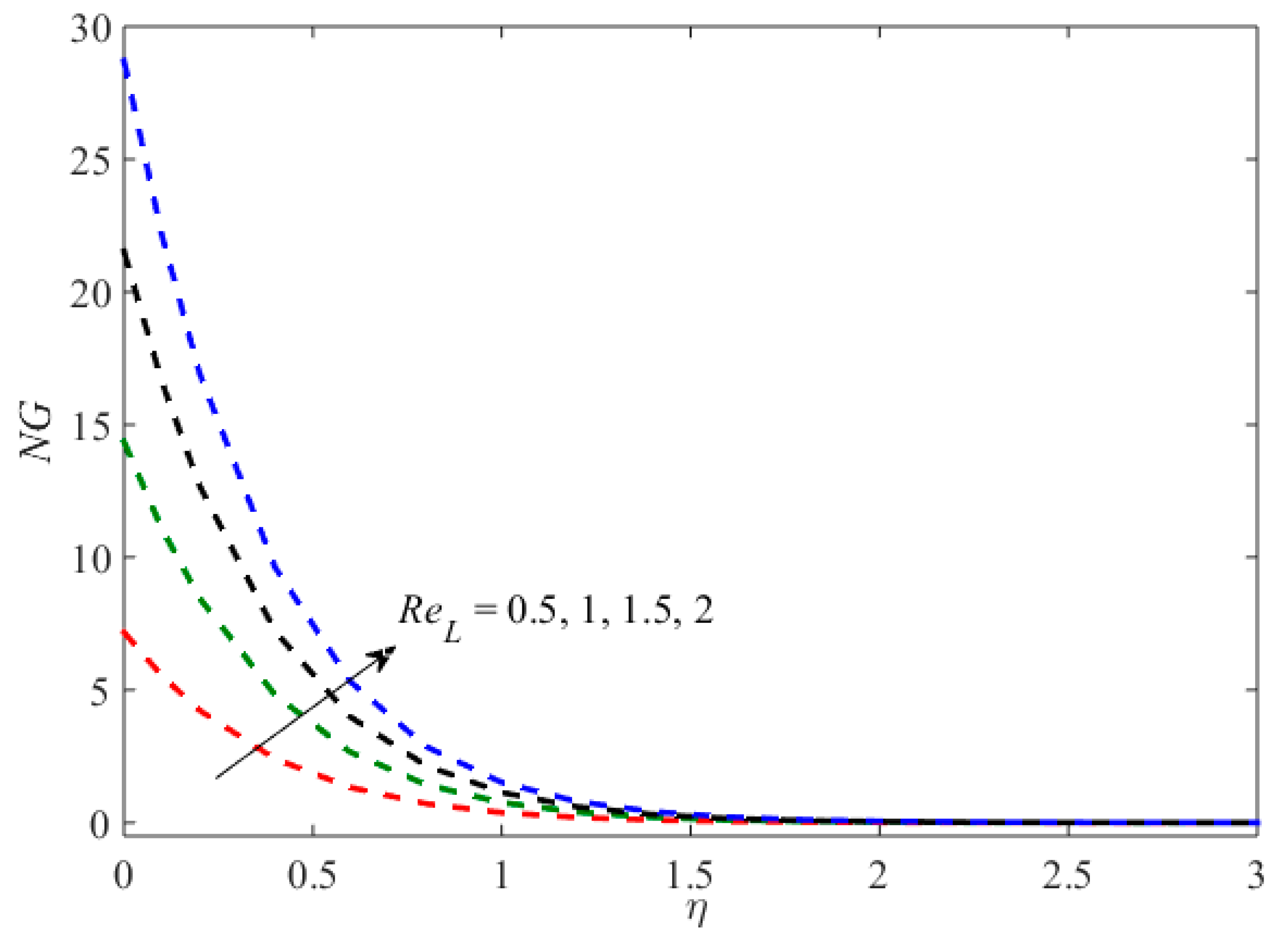 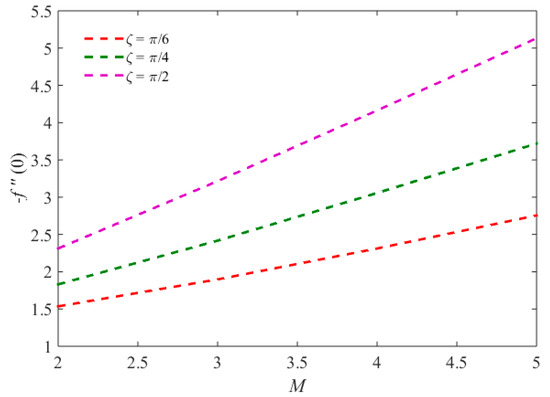 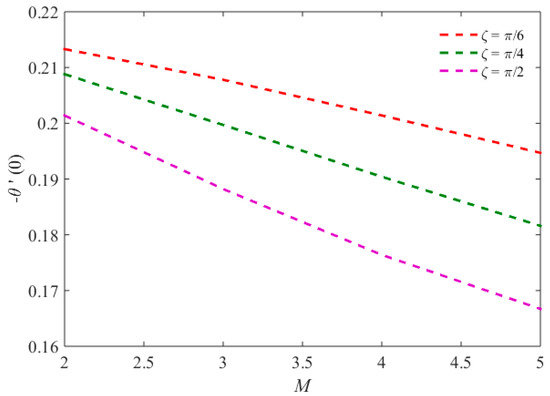 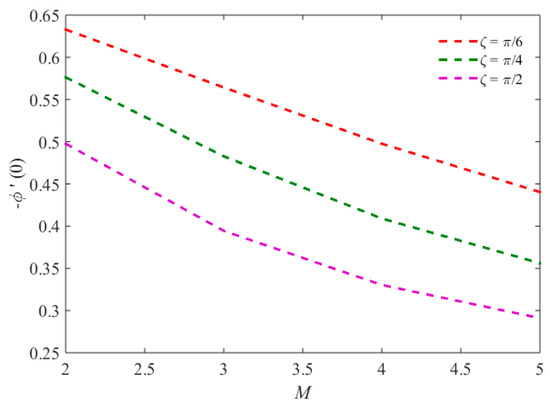